On the first day of the G7 summit in Cornwall, Boris Johnson is, even by his own dramatic standards, putting on a show.

Johnson’s G7 leaders will today have the full force of Britain’s greatest diplomatic asset hurled at them, as they are invited to join none other than Her Majesty Queen Elizabeth II, along with other senior members of the family, for a reception before dinner tonight.

The dinner will take place at the world-famous Eden Project, a striking collection of biomes, one of which is home to the largest indoor rainforest on earth.

While the dinner will be the main royal event of the day, leaders will meet with other members of the world’s most famous family to discuss issues on which some members of the family have been long-term campaigners. Prince Charles, for example, will meet with leaders and representatives from the world of business to discuss the coordinated effort to tackle climate change, one of the British government’s top priorities as it gears up to host COP26 later this year.

Rolling out the royals in this way is nothing new and plenty of British prime ministers have used the pomp of state visits to curry favor with world leaders. However, they are doing so at a time of particular tumult for the monarchy.

It was only a few weeks ago that the family was mourning its patriarch, after Prince Philip died at the age of 99. And the family is in the middle of a very public spat with Prince Harry and his wife Meghan, the Duchess of Sussex, following their explosive interview with Oprah Winfrey in which they accused an unnamed senior royal making racist statements.

Yesterday, things were not looking so good for Johnson, as he appeared on track for a collision course with the US President over Brexit. However, the US diplomatic pushback over reports that Biden had issued a demarche over Northern Ireland meant Johnson could sleep easy. Now, he can sit back and enjoy dazzling his fellow leaders as they rub shoulders with Britain’s biggest rockstars.

This post has been updated to clarify that the Queen will host G7 leaders before the dinner on Friday.

Pledges made by the UK and US to donate Covid-19 vaccines to developing world are "a step in the right direction, but they don’t go far enough, fast enough," according to the Wellcome Trust, a leading UK charity focused on health research.

Alex Harris, Wellcome's director of government relations, said in a statement that the G7 must show the political leadership the pandemic demands. "We urge G7 leaders to raise their ambition," he said, adding:

COVAX is a global vaccine sharing initiative run by a coalition that includes the Vaccine Alliance known as Gavi and the World Health Organization (WHO).

It is funded by donations from governments, multilateral institutions and foundations and its mission is to buy coronavirus vaccines in bulk and send them to poorer nations that can't compete with wealthy countries in securing contracts with the major drug companies.

However, Harris said that to end the pandemic, the G7 leaders must agree to do the following:

British Environment Secretary George Eustice said it was “a big change” to see the US engaging in global climate action following the lack of commitment on the issue from the Trump administration.

It's really welcome that the United States is back at the table on this agenda. The world can’t make progress here, unless we get very big players, including the united States at the table,” he told CNN.

While the Trump administration rolled back many of the climate commitments the US had made in the past, the Biden administration has “completely changed the US stance on this,” Eustice said.

Referring to his meeting with US Special Presidential Envoy for Climate John Kerry, Eustice said:

“It’s clear now that there is a real appetite in the US to play its part and take that global leadership again on this agenda. They are, now, really leading in this field.”

Eustice said he spoke with UK Prime Minister Boris Johnson about his bilateral meeting with Biden, and that Johnson called it “a breath of fresh air” to have the US back at the table again. "So, I think it is a big change," Eustice said.

Apart from the G7 summit, the UK is also hosting the COP26 climate meeting later this year. Eustice says the aim is to get “more ambitious targets from countries to reduce their carbon emissions.”

The UK has already set its nationally determined contribution at 68% by the end of this decade, and “we’ve already said that by 2035, we want to 78% reduction against our 1990 level,” Eustice added.

However, the government's own independent climate advisor, the UK Climate Change Committee, said the government needs to put in place a firm and detailed plan on how to achieve the goal.

China, and the ideological challenges posed by its rise, is set to be among the most pressing topics facing leaders of the G7 summit.

In his first foreign trip as the US President, Joe Biden is expected to try and convince allies to join Washington in taking a tougher stance towards Beijing over its actions in Xinjiang, Hong Kong and the South China Sea among other areas.

Laying out his trip last week, Biden wrote in the Washington Post that "the United States must lead the world from a position of strength," including on confronting the "harmful activities of the governments of China and Russia."

In some areas, there are signs such a united front is already forming.

In a joint statement on Thursday, Biden and his British counterpart Boris Johnson vowed to support a further investigation into the origins of Covid-19, including in China.

Support from the UK and possibly other G7 members will add weight to Biden's push for a reexamination on the origins of the virus, including new scrutiny on the lab leak theory. Beijing lashed out at Biden's call last month, accusing Washington of "political manipulation to shift the blame."

The summit is also reportedly expected to see the launch of a green alternative initially pushed by Biden to rival China's Belt and Road Initiative, with an aim to support sustainable development in developing countries. 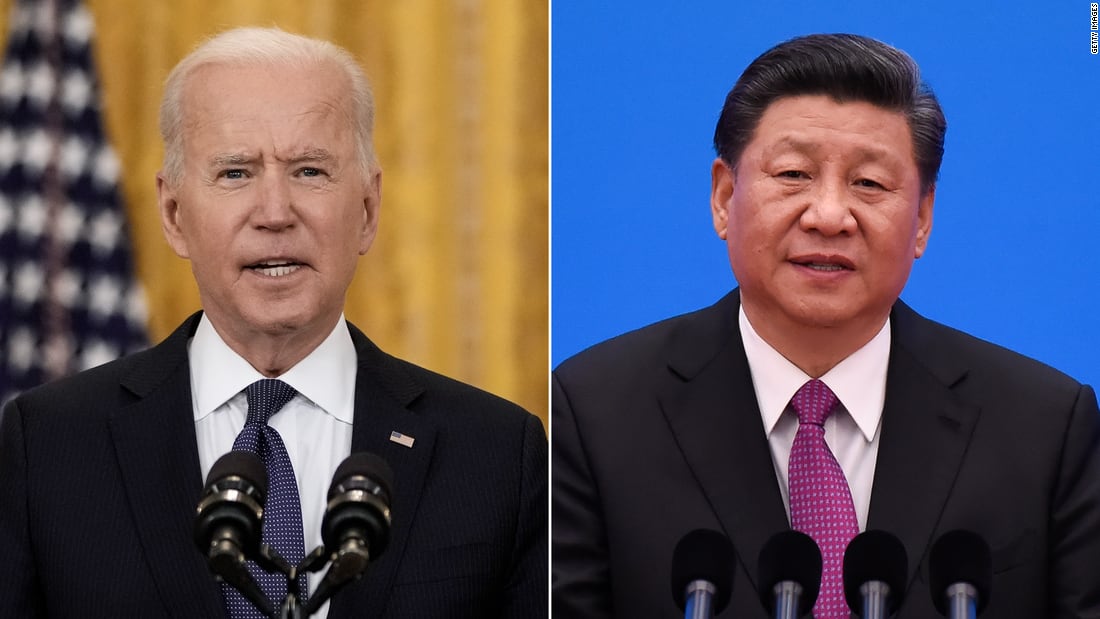 China may not be a member of the G7, but it's dominating the agenda

US President Joe Biden will use his G7 debut on Friday to push for one of his international policy priorities: a global agreement on a global minimum tax rate of at least 15% on multinational companies.

The finance ministers of the seven countries have already put their support behind the plan during their meeting in London last weekend.

Crucially, the group also agreed that the biggest companies should pay tax where they generate sales, and not just where they have a physical presence.

UK finance minister Rishi Sunak announced the agreement in a video posted on Twitter on Saturday, saying G7 finance ministers -- hailing from Canada, France, Germany, Italy, Japan, the UK and the US -- had "reached a historic agreement to reform the global tax system to make it fit for the global digital age and, crucially, to make sure that it's fair so that the right companies pay the right tax in the right places."

US Treasury Secretary Janet Yellen said the agreement was a "significant, unprecedented commitment," from the world's richest economies aimed at preventing companies from avoiding taxes by shifting profits overseas.

The announcement could have wide-reaching impacts. Tech giants such as Apple, Facebook and Google might be affected by the agreement. Foreign governments have long complained that large digital companies should pay them more in taxes.

Some have recently passed taxes specifically targeting revenue generated by such companies, including those based in the US such as Facebook, Google and Amazon.

The United Kingdom will donate at least 100 million surplus Covid-19 vaccine doses to COVAX, the vaccine sharing initiative, and to countries in need within the next year, British Prime Minister Boris Johnson is expected to announce Friday.

In a statement issued by Downing Street on Thursday, Johnson said:

As a result of the success of the UK’s vaccine program we are now in a position to share some of our surplus doses with those who need them. In doing so we will take a massive step towards beating this pandemic for good.

G7 leaders are expected to agree to provide one billion doses via dose-sharing and financing with an aim to end the pandemic next year, the statement adds.

Carrie Johnson has taken her first step onto the world stage as she welcomed the Bidens to Cornwall, southwest England.

It comes only two weeks after she married British Prime Minister Boris Johnson in a ceremony that was kept secret until after the event. The couple has a one-year-old son.

The Bidens and Johnsons met on the seafront Thursday in Carbis Bay before the wives left to take tea together, and the two leaders headed into a bilateral meeting.

On Friday, the 33-year-old will take center stage as she and her husband welcome the remaining leaders of the Group of Seven nations — Canada, France, Germany, Italy, Japan — and their partners to the G7 summit at Cornwall's Carbis Bay Hotel.

Carrie Johnson, nee Symonds, will not be the only spouse notching up her first G7 appearance as the summit gets under way Friday.

Brigitte Macron, spouse of French President Emmanuel Macron, has a number of G7 summits under her belt already and helped host the leaders for their last face-to face meeting in Biarritz in 2019.

Last year's G7, due to have been hosted in the US by then-President Donald Trump and first lady Melania Trump, was canceled because of the pandemic.

Catherine, the Duchess of Cambridge, will meet with US first lady Jill Biden on Friday, Kensington Palace told CNN.

A spokesperson said they will conduct “a joint engagement."

The palace has not yet publicly released any further information regarding the meeting, including expected timings or the location.

As the G7 summit kicks off Friday, the global economy will be front and center, according to a statement from the White House.

The leaders of some of the world's biggest economies will discuss global tax rate and aid for countries in need. These efforts, the White House said, will “forge a more fair and inclusive global economy” as the world leaders gather in Cornwall.

President Biden and the G7 leaders, the White House said, will:

Discuss ways to forge a more fair, sustainable, and inclusive global economy that meets the unique challenges of our time."

The statement says the G7 leaders are "committed to a global recovery that benefits the middle class and working families at home and around the world.”

The group is expected to announce an endorsement for the global minimum tax of at least 15% after Treasury Secretary Janet Yellen and her finance minister counterparts announced an agreement on the matter earlier this month in London.