The leaders of the world's advanced economies gathered Friday on the Cornish coast for the first time since the global coronavirus pandemic began, welcoming President Biden as a new member who arrived here intent on restoring traditional American alliances.

With a pandemic raging in much of the world, a global economy still in shock and threats rising from Russia and China, the Group of 7 summit that formally began on Friday was shaping up to potentially be one of the most consequential in recent memory. The gathered nations will pledge to donate 1 billion Covid vaccine doses, with the US providing about half of those shots.

Biden has ramped up those stakes, framing the moment as one just as momentous as the years during and after World War II, when the US, the United Kingdom and their allies worked together to help the world recover.

His day began with the landmark "family photo," a symbolic moment for a President who has long sought a place in the club of world leaders. The group smiled for the picture with scenic Carbis Bay in the background.

Biden was seen in friendly conversation with President Emmanuel Macron of France and Prime Minister Justin Trudeau of Canada as he walked to the platform. As the leaders were returning inside after the photo was taken, Biden walked arm-in-arm with Macron, whom he had not yet met as president.

Already, Biden has used his first trip abroad as President to announce a purchase of new vaccines for the developing world, likening it to American wartime efforts building tanks and airplanes. And he sat down for his first face-to-face meeting with Britain's Prime Minister in a photo op designed to replicate a historic World War II alliance.

He's sought to convey a message of unity after four years of fractured alliances under then-President Trump.

German Chancellor Angela Merkel said Friday that she is "very happy" to have Biden at the summit, saying that the G7 Summit will send a "strong" message in support of multilateralism.

"I am, of course, happy that the American President is present here. Being able to meet Joe Biden is obviously important because he stands for the commitment to multilateralism which we were missing in recent years," Merkel said.

"We will find strong words here in support of multilateralism and also for values based multilateralism which will lead to a dispute with Russia and in some aspects also with China," she added.

President Biden had a pull-aside meeting with French President Emmanuel Macron on Friday during the G7 summit, their first substantial in-person interaction since Biden took office.

“The Leaders discussed a range of regional and bilateral issues, including COVID-19 and counterterrorism efforts in the Sahel, and affirmed the importance of the U.S.-France partnership and the Transatlantic alliance,” the spokesperson said in a statement.

“President Biden enjoyed a positive and productive first day of discussions at the G7, focused on ways we can collaborate to build a more inclusive and fair global economy," the spokesperson added.

President Biden and British Prime Minister Boris Johnson exchanged gifts as part of their gathering in Cornwall for the G7 summit.

Biden gave Johnson a custom-made touring bike and helmet from Bilenky Cycle Works, a Philadelphia-based family business, as a “gesture of friendship and in recognition of their shared interest in cycling,” the White House said.

President Biden posed with Queen Elizabeth II and other G7 leaders ahead of a reception in Cornwall.

Biden was seated two seats away from the Queen, who was positioned center-stage during a photo-op at the Eden Project environmental site.

After the Queen stood up to conclude the photo, other leaders gathered around her, including Canadian Prime Minister Justin Trudeau, French President Emmanuel Macron and German Chancellor Angela Merkel.

Biden stayed back, speaking with Italian Prime Minister Mario Draghi as the group walked back into the venue.

It did not appear from the on-camera portion that Biden spoke one-on-one with the Queen during this engagement. 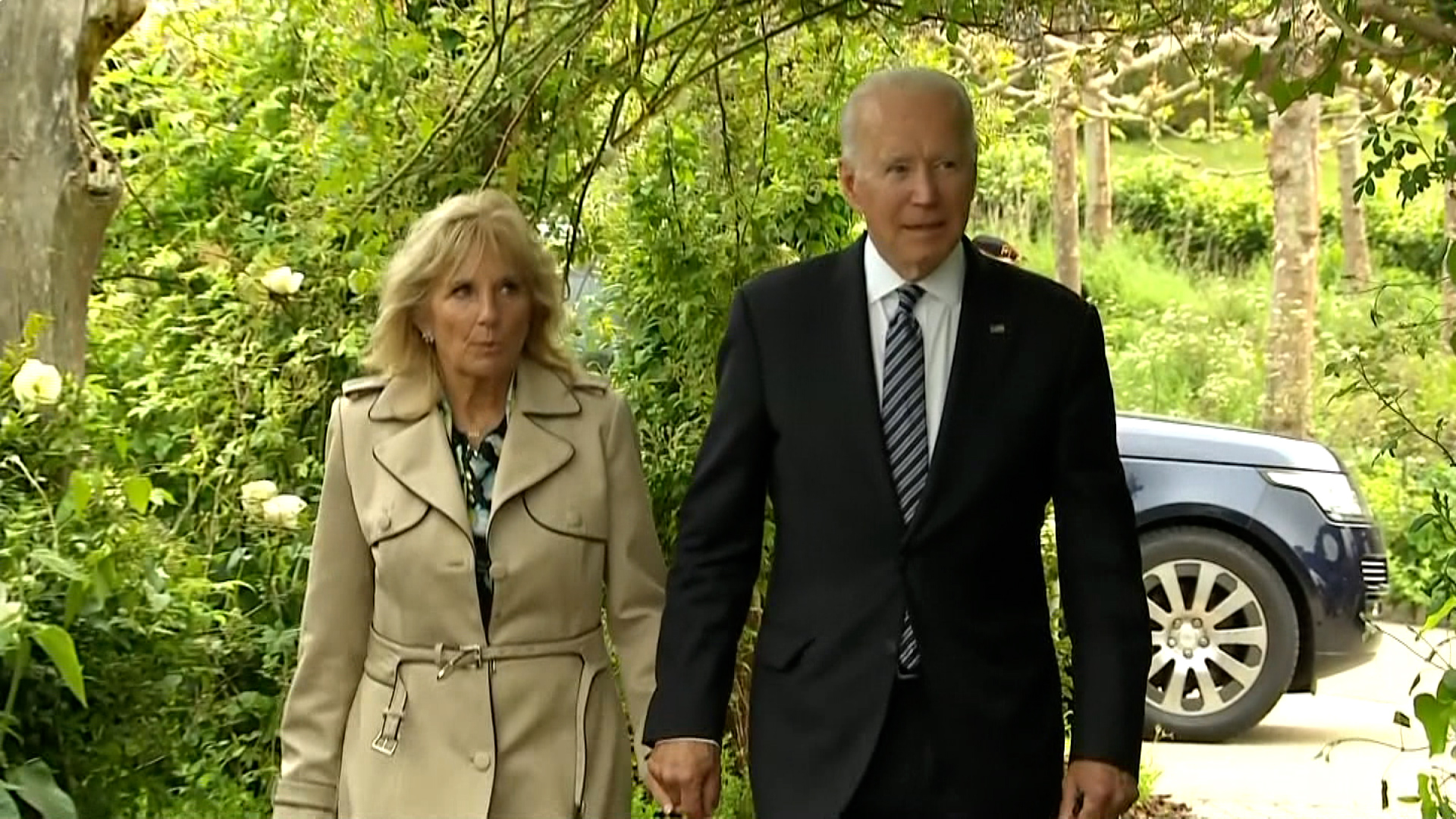 President Biden and first lady Jill Biden have arrived at the Eden Project, a Cornish botanical garden, where they will be joining G7 leaders and Queen Elizabeth II, as well as other members of the Royal Family, for a reception and dinner.

The first lady wore a trench coat and the President wore a suit and tie.

The Queen arrived earlier this hour with Prince Charles, Camilla, the Duchess of Cornwall, and William and Catherine, the Duke and Duchess of Cambridge.

During a speech at the G7 Summit in Cornwall on Friday, the Prince of Wales is set to call on world leaders to work together and mobilize to tackle the climate crisis, as they have mobilized to fight the coronavirus pandemic.

“The fight against this terrible pandemic provides a crystal-clear example of the scale and sheer speed at which the global community can tackle crises when we combine political will with business ingenuity and public mobilization,” Prince Charles is expected to say during his address, according to a news release from Clarence House.

The address will come just a day after the Prince of Wales hosted members of the Sustainable Markets Initiative (SMI) at St James’s Palace to discuss how the private sector can work with governments to tackle the global climate crisis.

“The Prince of Wales has worked for over 50 years to address environmental issues and tackle climate change. His Royal Highness believes that economic and social development will best succeed when it works in harmony, rather than in conflict, with nature,” Clarence House said Thursday in a statement.

During a speech on Thursday, the Prince of Wales described “potentially game-changing” partnerships between government, business and private sector finance as being “absolutely vital” to combatting climate change and biodiversity loss.

“Unless we can actually unlock private sector resource, innovation and finance…we just don’t stand a chance of solving the existential crises we have engineered over the years,” he added. 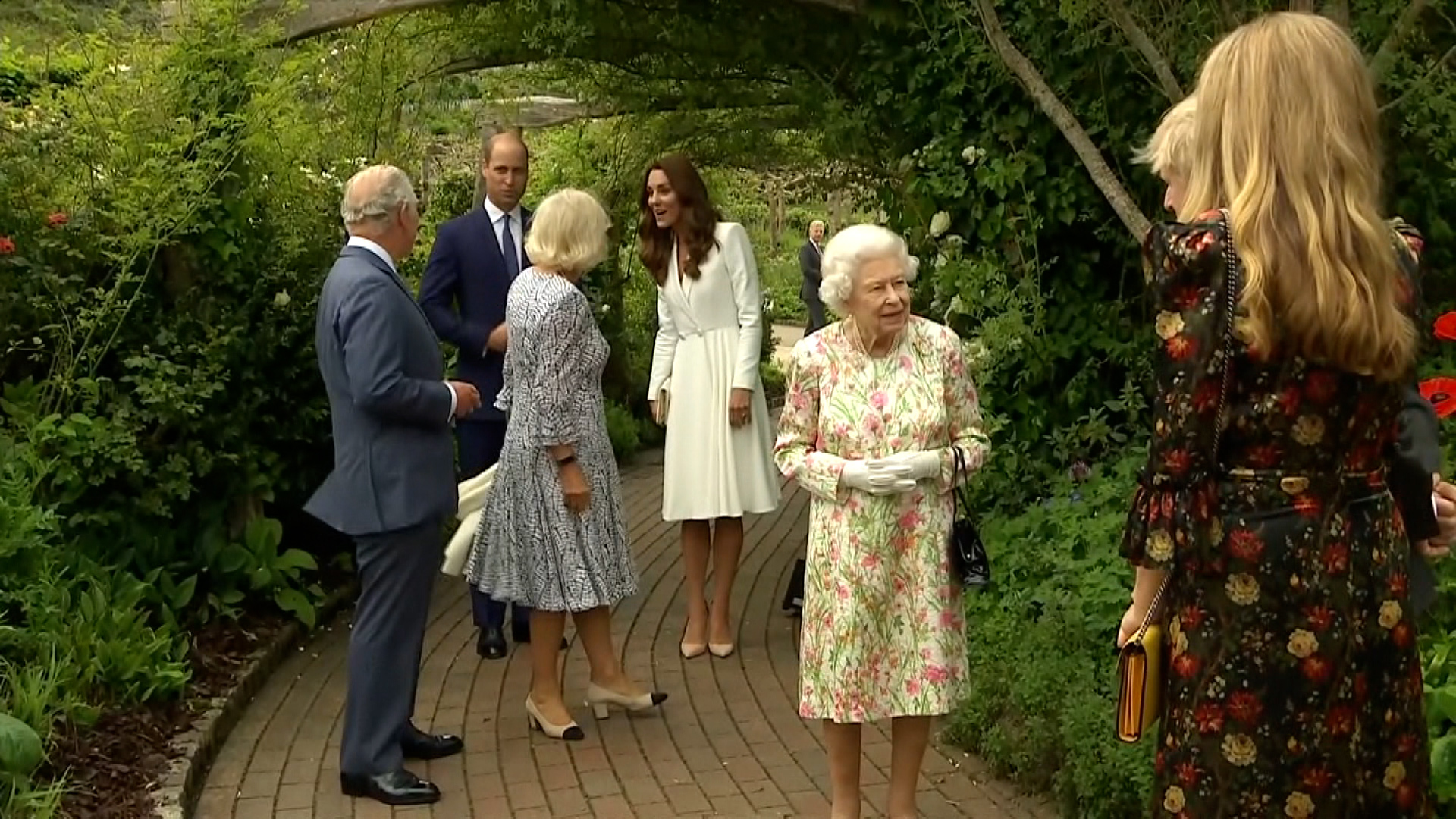 Queen Elizabeth II and other senior members of the royal family are set to meet G7 leaders and their partners at a reception in Cornwall, England.

The 95-year-old Queen, the Prince of Wales, Duchess of Cornwall and the Duke and Duchess of Cambridge will attend the reception at the Eden Project, a famous visitor attraction located in a reclaimed china clay pit.

The dinner comes after the initial day of meetings at the G7 summit. The leaders of the world's advanced economies gathered Friday on the Cornish coast for the first time since the global coronavirus pandemic began.

The global economy is up first on the agenda, with the global tax rate and aid for countries in need on the docket. These efforts, the White House said, will "forge a more fair and inclusive global economy" as the world leaders gather in Cornwall.

President Biden and the G7 leaders, the White House said, will "discuss ways to forge a more fair, sustainable, and inclusive global economy that meets the unique challenges of our time. President Biden and G7 partners are committed to a global recovery that benefits the middle class and working families at home and around the world."

What happens tomorrow: The world leaders will have back-to-back plenary sessions where they are expected to continue to discuss multiple topics including the economy and foreign policy.

Queen Elizabeth's history with US Presidents:

Leaders of the world's major economies have arrived in Carbis Bay, England, for the start of an in-person G7 summit.

It's the first time US President Biden is meeting his counterparts since being sworn in earlier this year. The global tax rate and coronavirus aid and recovery, as well as climate change and cybersecurity are set to be big topics of discussion.

At least 12 UK police officers supporting policing efforts at the G7 Summit in Cornwall, England, are now self-isolating after one police officer tested positive for coronavirus on Friday, Devon and Cornwall Police confirmed Friday in a statement.

“As part of our testing regime, during the early hours of 11 June we have identified one officer who is currently supporting G7 policing and accommodated on the ferry, has given a positive lateral flow test for COVID-19,” the police statement said.

According to Devon and Cornwall Police, the officer was being accommodated on the MS Silja Europa ferry, which is housing some 1,000 police officers and members of staff over the course of the G7 Summit.

“The officer, plus those who have come into close contact, are currently self-isolating at another designated location,” the statement from Devon and Cornwall Police said.

“All who have come into close contact or are in the bubble of those who tested positive are also currently self-isolating which equates to 12 officers in total,” the statement added.

Devon and Cornwall Police have affirmed that they continue to follow the advice of Public Health England, adding that all those who receive a positive lateral flow test for coronavirus are then required to undertake a PCR test.