Our live coverage has ended. Read more about the summit here.

Kremlin spokesman Dmitry Peskov said Russian President Vladimir Putin is arriving in a constructive mood for the meeting with his US counterpart Joe Biden.

"We have a big backlog of issues to address so President Putin arrives in a constructive spirit of openness to raise questions and try to find solutions," Peskov said.

Peskov, speaking moments before Putin’s arrival in Geneva, Switzerland, said talks will be tough, and will touch on strategic stability and bilateral relations. 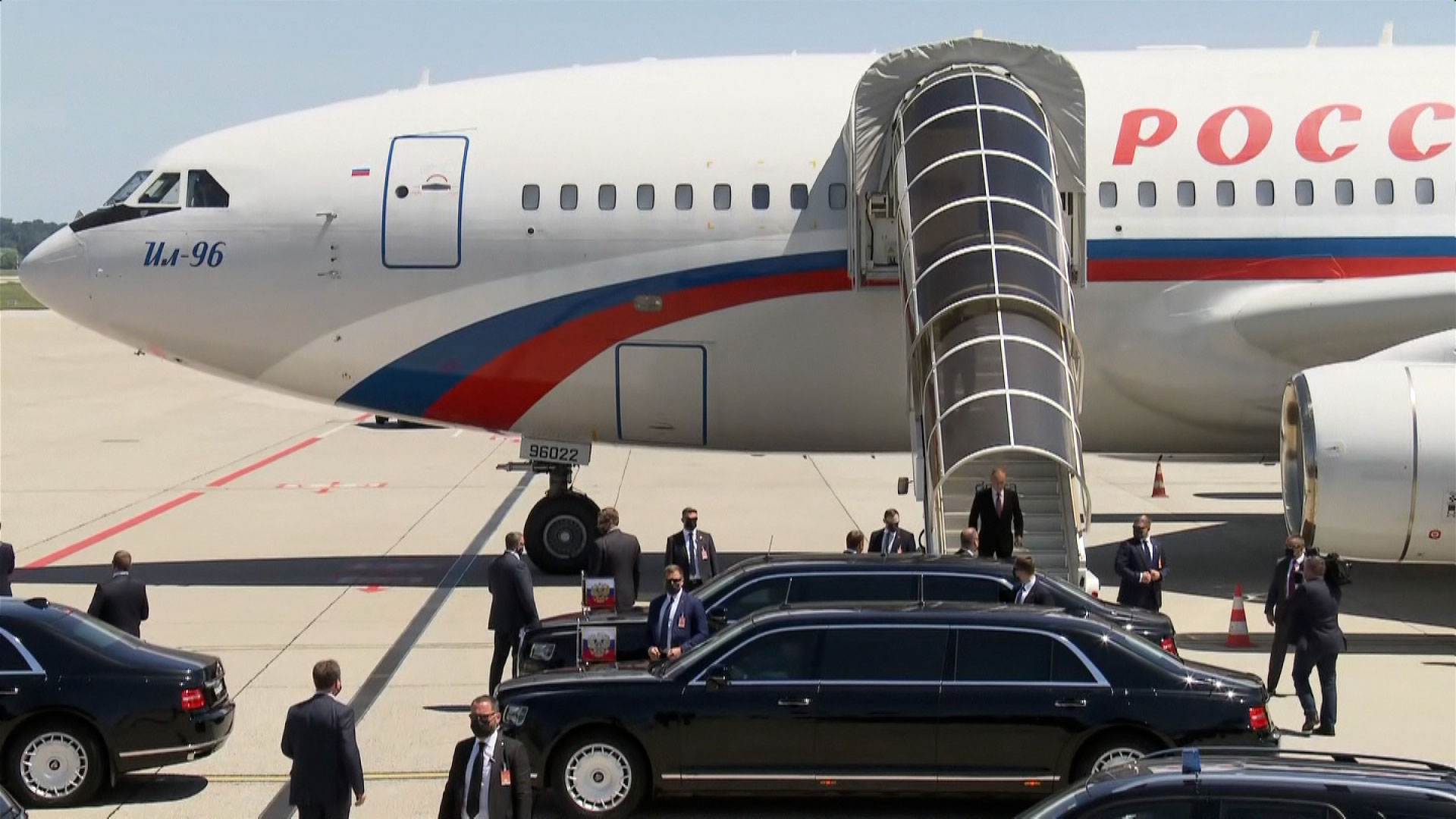 Parmelin will greet Biden and Putin and take part in a photo opportunity.

Officials aboard Air Force One during the flight from Brussels to Geneva said US President Joe Biden would meet Russian President Vladimir Putin at 1 p.m. CET, 7 a.m. ET, at the lakeside villa where the summit is occurring.

Putin will arrive at the villa first and both will be greeted by the Swiss President before posing for a photo.

Their first meeting will contain four participants: Biden, Putin, US Secretary of State Antony Blinken and Russian Foreign Minister Sergey Lavrov. Each side will have a translator, and there will be a photo-op with reporters at the start.

The meeting will then expand with five-member delegations on each side, in addition to Biden and Putin.

US officials said they expected the talks to last four to five hours, or perhaps longer. The leaders are not expected to share a meal.

No breaking of bread," a senior administration official said.

The two leaders will conclude by convening separate press conferences.

Officials underscored the modest expectations for the talks, listing nuclear stability and other arms control agreements as a potential source of agreement. They said it was possible that areas of potential cooperation are farmed out to aides for further work.

Ransomware is expected to factor heavily in the talks, and the official said Biden would underscore US plans to respond to continued state-directed hacks.

Biden will raise human rights, the official said, but would not specify if that will include a discussion of opposition leader Alexey Navalny.

Both the US and Russian ambassadors to the respective capitals will be in Geneva for the talks.

The senior administration official said Biden has been reviewing the issues in written material and engaging with a wide variety of advisers in the lead-up to the summit.

After the initial bilat with Presidents Biden and Putin and their top diplomats (Secretary of State Antony Blinken and Foreign Minister Sergey Lavrov) the meeting will expand to include five officials on each side.

Biden will be joined by:

Biden has been in intensive preparations for several weeks and was scheduled to dine with his closest foreign policy hands — Blinken and Sullivan — on Tuesday night at his hotel in Geneva.

Officials are entering the talks with the expectation they could extend well past their allotted time.

I think we're going to see how the flow goes. This is diplomacy in action," a senior Biden administration official said. "Get on the ride."

A senior administration official noted the thorough negotiations over the structure of the Geneva sit-down included an agreement that there would be flexibility built into the day.

While officials are coy about where that flexibility may lead — if anywhere at all — a decision by Biden and Putin to meet one-on-one, or break out their advisers into separate sessions, may serve as a signal that areas of potential cooperation can be fleshed out or addressed in a more fulsome manner.

"We've agreed with the other side that there will be some flexibility just so that the leaders can make determinations about the best way to conduct their business," the official said.

UPDATE: This post has been updated to remove a photo of President Biden's Tuesday meeting with Swiss President Guy Parmelin.

US President Joe Biden has harbored a skeptical view of Russian President Vladimir Putin for decades.

After former President George W. Bush met with Putin in Slovenia in June 2001, Bush said he looked him in the eye and got "a sense of his soul." Biden, then a senator and chairman of the Foreign Relations Committee, responded to those comments by saying, "I don't trust Putin. Hopefully, the president was being stylistic rather than substantive."

Biden has taken a large coterie of aides with him on his first foreign trip. He traveled with Blinken aboard Air Force One to Cornwall, though the secretary of state departed early for Brussels on his own plane. Also on the trip are national security adviser Jake Sullivan, who has staffed Biden in summit sessions.

The Wednesday summit between Biden and Putin — and its anticipated outcome — was the subject of considerable conversation among other leaders gathering for a meeting of their own at NATO Headquarters on Monday.

British Prime Minister Boris Johnson said Biden would "be taking some pretty tough messages to President Putin in the course of the next few days," a comment suggesting that he, too, had discussed the summit with Biden during their back-to-back days of receptions and sessions that he hosted on the first part of Biden's journey.

US officials have said that US President Joe Biden will raise human rights issues during his talks with President Vladimir Putin, but would not specify whether that will include a discussion of jailed Russian opposition leader Alexey Navalny.

However, Navalny’s anti-corruption foundation’s Executive Director Vladimir Ashurkov said this morning that he hopes “there is movement on this issue.”

Mr. Biden and the US administration have been really supportive, raising its voice against this unlawful incarceration. Navalny really has become the most prominent political prisoner now globally. So, I hope there is movement on this issue as a result of this summit,” Ashurkov told CNN.

Navalny was imprisoned earlier this year by a Moscow court for allegedly violating the probation terms of a 2014 case in which he received a suspended sentence of three and a half years.

On June 9, a Moscow court ruled that two organizations linked to Navalny are "extremist" groups – forcing them to shut down and rendering their members ineligible to run in upcoming elections.

“It's not the first instance of pressure on our organization, on our activists,” Ashurkov said. “We have always regrouped so we’ve evolved, and we have found ways to fight this terror regime.”

Meanwhile, Navalny is feeling “much better” following his hunger strike, Ashurkov said Wednesday. “He’s now back to normal in terms of eating, even though his health issues still remain.”

On Monday, Biden was asked what it would mean for the US-Russia relationship if Navalny were to die or be killed in prison.

"Navalny's death would be another indication that Russia has little or no intention of abiding by basic fundamental human rights," Biden responded. "It would be a tragedy. It would do nothing but hurt his [Putin's] relationships with the rest of the world, in my view."

Each nation has heaped praise on the other ahead of Vladimir Putin’s summit with US President Joe Biden this week. The Russian leader declared relations to be at an “unprecedentedly high level” in an NBC interview on Monday, while China’s foreign ministry spokesperson Zhao Lijian proclaimed “our friendship is unbreakable” in a news briefing.

But their tactical alliance has taken on more urgency since Biden came into office with a pledge to assert US leadership on the world stage. Under Biden, Washington has repeatedly singled out the two nations as the biggest threats to the rules-based international order, as it rallies allies to unite in an apparent ideological battle between democracy and autocracy.

Over the past few days, discussions on how to counter the authoritarian actions of Russia and China were featured prominently in both the Group of Seven (G7) summit in England and the NATO meeting in Brussels.

Despite the appearance of unity between Russia and China, the potential for friction exists.

Firstly, trade relations between the two are deeply imbalanced. China is Russia's largest trading partner, while Russia is a far less significant trading partner to China. There could be geopolitical concerns too. Through its Belt and Road Initiative, China has expanded its economic influence in Central Asia, an area long deemed by Russia as its sphere of influence.

Observers have long seen growing Sino-Russian ties as a partnership of convenience driven by geopolitical and economic interests, after the two powers moved on from their past animosity. In the late 1950s, relations between Moscow and Beijing became strained, and were later characterized by deep mistrust, ideological disputes and border conflicts.

And now, in the absence of shared fundamental values, common ideologies and a formal military alliance, it remains to be seen just how deep and lasting their ties will be.

Editor's note: CNN will be launching the Meanwhile in China newsletter on June 21, a three-times-a-week update exploring what you need to know about the country's rise and how it impacts the world. Sign up here and read the full story below: 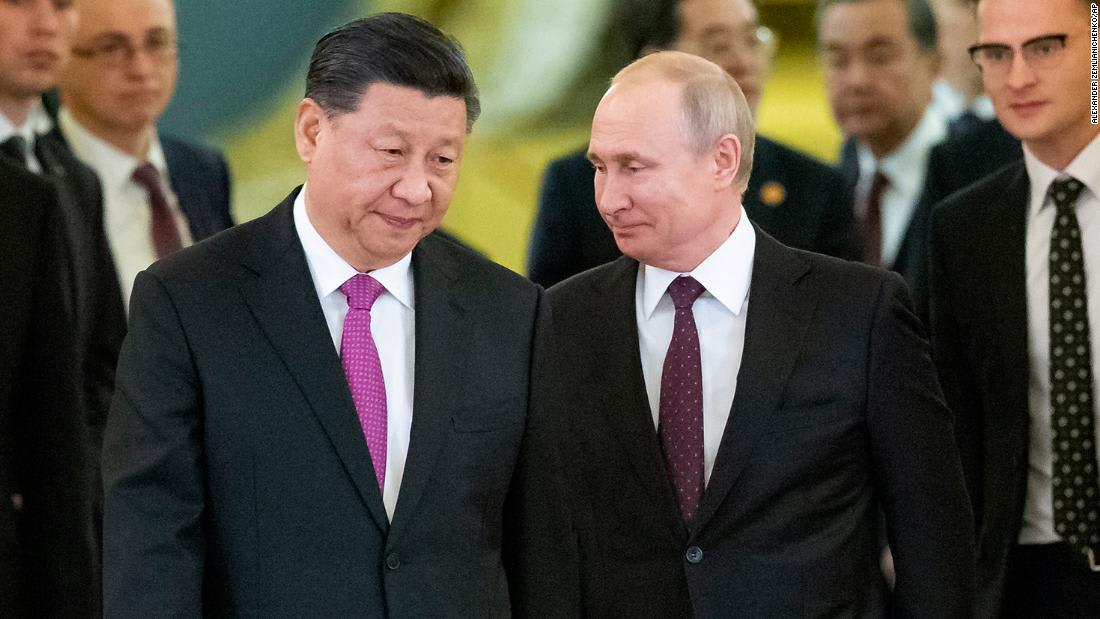 US and allies are pushing China and Russia closer together, but will their 'unbreakable friendship' last?

US President Joe Biden does not plan to hold a joint press conference with Putin following the summit, choosing instead to speak to reporters solo.

Officials say Russia pushed for a joint press conference during negotiations about the summit. But the US resisted because they did not want to give Putin a platform like he had after a summit with former President Donald Trump in Helsinki.

Officials also said they were mindful of Putin's desire to appear like he'd gotten the better of a US president, and wanted to avoid a situation that devolved into a tit-for-tat playing out in public.

"This is not a contest about who can do better in front of a press conference or try to embarrass each other," Biden said on Sunday, explaining the decision.

Biden will meet with Putin in two sessions, one a smaller group and one with a larger contingent of aides, according to a White House official.