Our live coverage has ended. You can read about day 2 of the summit in the posts below.

Approximately 100 countries have signed on to a global pledge to cut methane emissions by 30% by 2030, led by the United States and the European Union.

“This is fantastic,” European Commission President Ursula von de Leyen said Tuesday as she announced the news, explaining that slashing methane emissions will have a quick impact. “Doing that will immediately slow down climate change.”

“We have to act now,” she explained. “We cannot wait for 2050, we have to cut emissions fast and methane is one of the gases we can cut fastest.”

“Cutting back on methane emissions is one of the most effective things we can do to reduce near term global warming and keep 1.5 degrees Celsius. It is the lowest-hanging fruit,” she concluded.

Methane — the main component of natural gas — is invisible and odorless, and has 80 times more warming power in the near-term than carbon dioxide. Methane can be produced in nature from volcanoes and decomposing plant matter, but it is leaked into the atmosphere in much larger amounts by landfills, livestock and the oil and gas industry.

UK Prime Minister Boris Johnson personally apologized to Israel’s Energy Minister, Karine Elharrar, who was unable to attend COP26 on Monday because of the lack of wheelchair access to the venue.

Elharrar, who suffers from muscular dystrophy and uses a wheelchair, was unable to attend Monday’s proceedings and Johnson personally apologized to her for the incident, according to a senior official with the Israeli delegation at COP.

Elharrar traveled to the COP venue in Bennett’s motorcade on Tuesday and was accompanied by the Israeli Prime Minister into the conference, the official said.

Bennett sharply criticized the event organizers for the wheelchair-access issue after Monday’s incident, and had threatened to cancel his appearance at the event Tuesday.

The president of COP, Minister Alok Sharma has repeatedly said that a fully inclusive conference was critical to the success of the climate conference.

Downing Street confirmed to CNN that Johnson had apologized to Elharrar.

Climate activists of all ages have descended on Glasgow to demand that world leaders act quickly to combat the climate crisis -- but not all are hopeful that COP26 will lead to concrete pledges.

CNN's Ivana Kottasová has spoken with a few of them:

Azeez Tobi Abubakar, from Nigeria, and Inés Yabar, from Peru, tell CNN they are in Glasgow to represent the missing majority who cannot attend. They want to amplify the voices of young people who are already feeling the devastating impact of climate change.

"Me being here is a good opportunity to make sure that the voices of those not being here are being heard," said Abubakar, who lives in Lagos, a low-lying city on Nigeria's Atlantic coast that is increasingly vulnerable to sea level rise and flooding.

Home to more than 24 million people, Lagos may become uninhabitable by the end of this century as sea levels rise due to climate change, scientific projections suggest.

"To me it’s all about bringing here the voices of the missing majority. The people who cannot come to COP," Yabar said of her desire to be at the summit.

Both Abubakar and Yabar have access to the main venue and say they will make sure to speak to delegates about the people they represent and experiences with climate change.

Gill Phillips, 66, from Bristol, England, came to Glasgow carrying a homemade banner that reads: "History will judge you."

She's not optimistic that history will judge world leaders at COP26 well.

“I think I will be disappointed. The world leaders, they are in office for five, 10 years. They care about getting re-elected, not about the long term. I’m hoping there will be some announcements. But then again, there have been announcements before and nothing happened," Phillips said.

“We each need to do our bit. I can put my banner up, but there’s not much individuals can do. This is up to the world leaders, corporations, businesses."

Amelia Ramirez, 67, and Sten-Ivan Bylund, 75, are two members of the “Grandparents for Future,” a Swedish group of elderly people — with or without grandchildren — who want to support young activists in their fight to stop climate change.

“We have been supporting Greta Thunberg since, well, pretty much the first day,” Bylund said.

The group took the train to Edinburgh and then spent four days walking 40 miles to Glasgow, where they are hoping to have their voices heard.

“There’s some hope … if the people there on the other side of this river [at the summit] take strong decisions, there is still hope that we can [stay] below 1.5 degrees,” Bylund said.

What steps does he want to see agreed in Glasgow?

At the COP26 summit, attendees can find out how much the food they're buying costs and how much greenhouse gas that item has emitted.

"We have partnered with Swedish start up Klimato to analyse the carbon footprint of the food served at COP26," the menu website says. "We will communicate the footprint of each dish on menu boards, informing attendees about what dishes have the lowest impact."

Each dish is categorized by the food's general carbon footprint: low, medium or high.

US President Joe Biden committed to reducing global methane emissions by 30% by 2030 and announced two new proposed US rules in remarks at the COP26 climate summit in Glasgow, Scotland.

"One of the most important things we can do in this decisive decade is to keep 1.5 degrees [Celsius] in reach, is reduce our methane emissions as quickly as possible," Biden said.

Biden said "over 80, it's approaching 100 countries" pledged to accomplish this goal.

"This is going to make a huge difference. And not just when it comes to fighting climate change as [EU President Ursula von der Leyen] pointed out. Physical health of individuals and whole range of other things. It is going to improve health, reduce asthma, respiratory related emergencies, it's going to improve the food supply as well by cutting crop loss and related ground level pollution. It's going to boost our economies, saving companies money, reducing methane leaks, capturing methane and turn it into new revenue streams and as well as creating good paying union jobs for our workers," he said.

Biden announced two new proposals for the US: "One through our Environmental Protection Agency that is going to reduce methane losses from new and existing oil and gas pipelines. And one through the Department of Transportation to reduce wasteful and potential dangerous leaks from natural gas pipelines."

Biden also announced a new initiative to work with farmers and ranchers to reduce methane emissions.

"This isn't just something we have to do to protect the environment of our future, it is an enormous opportunity, enormous opportunity for all of us, all of our nations to create jobs, and make meeting climate goals a core part of our global economic recovery as well," he said.

Helping to keep the 1.5-degree target alive is Norway's overriding ambition at COP26, the country’s prime minister said in his opening remarks at the climate summit. “This is existential, it is urgent and it is possible if we jointly step up our commitments,” Jonas Gahr Støre said.

Under the 2015 Paris climate accord, countries committed to reduce their carbon output and halt global warming below 2 degrees Celsius -- and if possible, below 1.5 degrees Celsius -- by the end of the century to avoid the worst impacts of climate change.

Prime Minister Støre also said Norway was at the summit with three commitments:

Firstly, the country is ready to double its climate financing contribution to more than $1.6 billion by 2026. “That’s contributing significantly to the hundred billion dollars target set in Paris. And in doing so, we will invite private capital to join us in mobilizing necessary resources,” Støre said.

Secondly, the Prime Minister said that his government will prioritize working with business, industry and social partners to “help us all succeed the transition towards renewable, circular and sustainable future.”

“Norway is positioned to take a lead in developing ocean-based solutions such as offshore wind, green shipping, carbon capture utilisation and storage, hydrogen and electrical mobility,” he added.

Støre said his country's third point is a warning that the financial sector must play its part. “Norway’s public pension fund is the world’s largest sovereign wealth fund. Our goal is to make it the leading fund in responsible investment, and the management of climate risk. Climate risk is indeed a financial risk, and it needs to be managed as such.”

Beijing’s special envoy on climate change has said that China has been leading investment in renewable energy.

“For the past eight years China has been number one in terms of investment in renewable energy. Because of our efforts in developing renewable energy, the cost has been driven down largely now,” Xie Zhenhua said. “Renewable energy is competitive compared to conventional energy resources in China, and with our continuous efforts, the cost continue to go down.”

China, the world's biggest polluter, has made only a small improvement in its emission-cutting plan formally submitted to the United Nations last Thursday, just days before the start of COP26.

In the new plan -- known as a Nationally Determined Contribution (NDC) -- China said it aimed to peak CO2 emissions before 2030 and reach net zero by 2060, a pledge that President Xi Jinping had previously announced. It added that China would lower its CO2 emissions per unit of gross domestic product (GDP) by over 65% from the 2005 level by 2030.

US Special Presidential Envoy for Climate John Kerry said Tuesday there is "something different" happening at the COP26 climate summit taking place in Glasgow, Scotland, pointing to a level of engagement by world leaders and a sense of urgency that he hasn't seen at previous United Nations climate summits.

"There is something bigger, more engaged, more urgent in what is happening here than I have seen in at any other COP, and I believe we are going to come up with record levels of ambition," Kerry told CNN's Christiane Amanpour Tuesday. The gathering in Glasgow is the 26th annual conference of parties (COP) brought together by the United Nations to address climate change.

Kerry said he believes it is possible to reach the goal that world leaders agreed to at COP21 in 2015 – also known as the Paris Agreement – of holding global warming to well below two degrees Celsius, and if possible, 1.5 degrees Celsius.

"I believe that if people do what they've laid out as their specific plans, yes," Kerry told Amanpour when asked if he still thought 1.5 degrees Celsius was still an achievable target.

The former secretary of state continued: "Is it hard? You're right, it's damn hard. It's very hard, but it is better to push for that. It's better to make that your target."

The prevailing scientific consensus is that temperatures can rise 1.5 degrees Celsius over pre-industrial levels before the most catastrophic changes – increasingly devastating fires, floods and droughts – begin to occur.

But significant questions remain about whether some of the world's largest emitters of greenhouse gases, including China and India, will get on board. 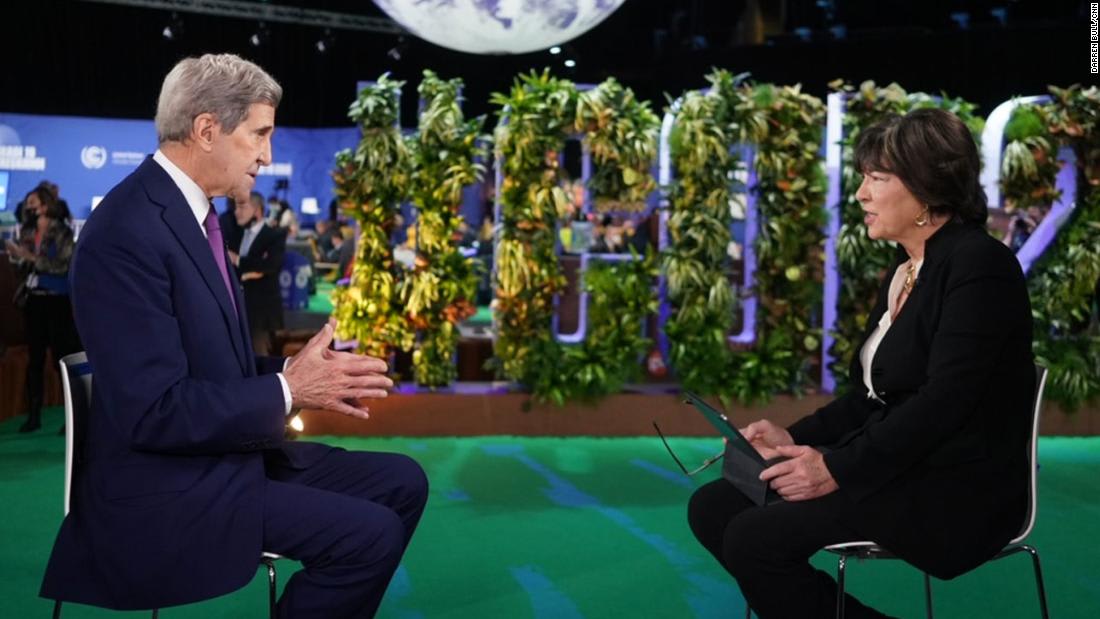