Beginning at 4:30 p.m. ET, the Supreme Court building will be closed to the public until further notice, according to a note sent out by the court's public information officer.

The building will remain open for official business, and case filing deadlines are not extended under Rule 30.1, according to the statement.

The National Football League has announced the cancellation of its annual league meetings that were scheduled to start on March 29 in Palm Beach, Florida.

All large public events have been canceled or postponed, and meetings will move to video conferencing until the emergency ends, the mayor said.

Additional hand washing and sanitizing stations are being set up in public buildings and all non-essential travel is being stopped.

Noting that Los Angeles has seen earthquakes, unrest, and fires, the mayor expressed his confidence that the city will survive this outbreak as well. He called on the public to take part, saying “We are all first responders in this emergency.”

Miami Mayor Francis Suarez has gone into self-quarantine after he was in the room with Brazil's president and his entourage, according to a video message that was played during a news conference.

In the recorded video message, Suarez said he was in the same room as Brazil’s President Jair Bolsonaro and his entourage. Suarez said he feels well, but he has taken this step out of an abundance of caution.

More on this: Concerns arose among political officials after a Brazilian government aide tested positive for coronavirus.

The health of the Brazilian president is being monitored.

Wajngarten was with Bolsonaro on last weekend’s US trip, during which the Brazilian president dined with President Trump at Mar-a-Largo. Wajngarten posted a picture of himself with Trump on Instagram a few days ago.

New York Gov. Andrew Cuomo announced today that the state is banning all gatherings of more than 500 people.

He said that for gatherings of 0-500, they are reducing the occupancy by 50%. "So 50% of your seated capacity is the new capacity for your facility."

He said the mandate goes into effect 5:00 p.m. ET on Friday.

That means 403,233 students will be out of school over the coming days.

Here's we know about the closures:

“We are all very concerned for ourselves and our families with the virus that’s going on,” he said. “They are very concerned and yet they do go to work every day.”

The concern is particularly strong among coach cleaners who do the disinfecting of trains. He said they’ve been given protective gear like gloves, “but you never know what could happen at any time.”

He said rail companies may look to labor for cost savings. “If they feel they’re losing money, the first place they cut on is labor.”

Here's where the cases are located in the state: 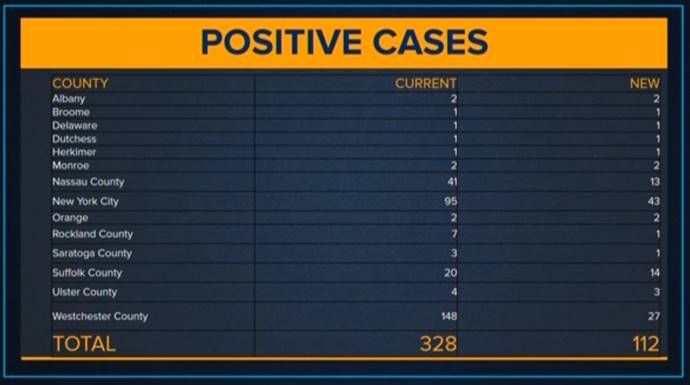 Utah Jazz player Donovan Mitchell admitted that he has tested positive for coronavirus.

Mitchell posted the news on his verified Instagram account. On Thursday, ESPN and other media outlets, reported that his teammate Rudy Gobert and now Mitchell have tested positive for coronavirus.

“Thanks to everyone who has been reaching out since hearing the news about my positive test. We are all learning more about the seriousness of this situation and hopefully people can continue to educate themselves and realize that they need to behave responsibly both for their own health and for the well being of those around them. I appreciate the authorities in Oklahoma who were helpful with the testing process and everyone from the @utahjazz who have been so supportive. I am going to keep following the advice of our medical staff and hope that we can all come together and be there for each other and our neighbors who need our help”

Earlier on Thursday, the Jazz revealed that two of their players had tested positive for coronavirus. The Jazz have not named either player.

CNN Sports has reached out multiple times to the Jazz and the League but has not gotten a reply.