Alaska has identified its first coronavirus case, a "foreign national" traveler, according to Gov. Mike Dunleavy.

The case is a presumptive positive case -- meaning the patient has tested positive in public health labs but is still pending final confirmation by the US Centers for Disease Control and Prevention (CDC).

The patient is a foreign national who was “transiting through” the state, according to State Chief Medical Officer Dr. Anne Zink.

“My heart goes out to this individual, as they are suddenly here and getting this news and information far away from loved ones and family,” Zink said today.

Alaskan officials are not identifying the patient’s country of origin, but say the individual came to the state by plane and has been cooperative.

The governor sought to reassure residents of the state. “No reason to panic. No reason to get upset,” Dunleavy said.

Zink says they consider this “an isolated case,” although they are prepared to see more coronavirus cases in the future.

Officials say they currently know of no one else in danger from exposure to the patient. 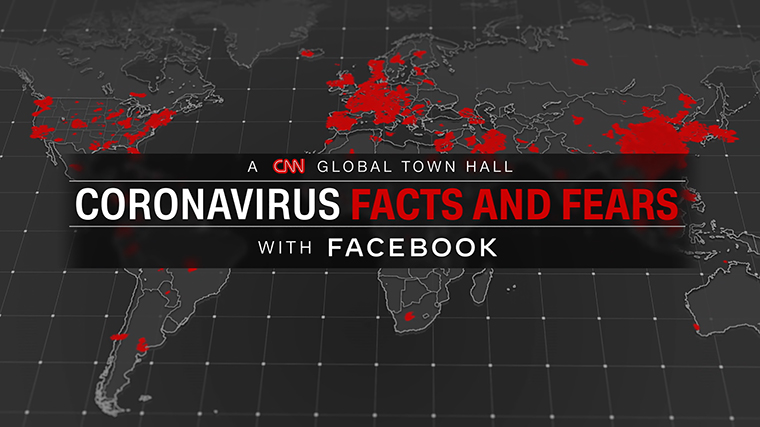 You can watch the town hall on the video player above, on air, on CNN.com and all digital platforms, and streaming devices on CNNgo.

European Union leaders said Thursday they disapprove of President Donald Trump’s decision to ban travel from Europe to the US amid the coronavirus pandemic.

In a statement, the Presidents of the European Council and the European Commission, said that the outbreak is a “global crisis, not limited to any continent and it requires cooperation rather than unilateral action.”

“The European Union disapproves of the fact that the US decision to impose a travel ban was taken unilaterally and without consultation,” the statement from Charles Michel and Ursula von der Leyen read.

Trump said he didn’t consult European leaders before announcing US travel restrictions on 26 European countries because it would have taken too long.

“We get along very well with European leaders, but we had to make a decision and I didn’t want to take time and, you know, it takes a long time make the individual calls and we are calling and we had spoken to some of them prior to (the announcement),” he said.

The move could cost the US travel industry billions of dollars, according to the US Travel Association.

The sports and entertainment worlds react

Major sports leagues including the NBA, Italy's Serie A and US Major League Soccer are suspending or postponing their seasons. College basketball's March Madness tournament was also canceled. Major League Baseball announced that the start of the season will be delayed by at least two weeks and it has canceled the remaining spring training schedule.

Disney Parks are closing their doors too.

New York City is taking swift action. Mayor Bill De Blasio said Madison Square Garden and the Barclays Center, two major venues in the city, could be closed for months. Broadway is suspending all shows too.

In the entertainment world, two of the US' biggest late-night talk shows -- "The Tonight Show" and "Late Night with Seth Meyers" are suspending production until March 30. The Tribeca Film Festival was also postponed.

Wall Street is now officially in a bear market. US stocks on Thursday recorded their worst day since the 1987 crash, on rising fears about the coronavirus pandemic.

The index dropped 7% in the first minutes of trading, which triggered a circuit breaker and led the New York Stock Exchange to suspend trading for 15 minutes.

The Dow finished 2,352 points, or nearly 10%, lower in its biggest one-day percentage drop since “Black Monday.” The index is now at a level not seen since summer 2017.

There are at least 1,635 cases of the novel coronavirus in the United States, according to state and local health agencies, and the Centers for Disease Control and Prevention.

70 cases are repatriated citizens, like those evacuated from the Diamond Princess cruise ship or from China.

1,565 cases were detected and tested in the US, and are spread out across 46 states and the District of Columbia.

41 people have died across the US, the majority in Washington state.

The tally includes presumptive positive cases -- patients who have tested positive in a public health lab and are pending final confirmation from the CDC.

Top US negotiators were unable to clinch a final agreement on a sweeping legislative package to address the economic fallout of the coronavirus crisis tonight, pushing talks into Friday as they sought to close out a handful of outstanding issues.

After hours of talks and trading of proposals, including eight separate phone calls between House Speaker Nancy Pelosi and Treasury Secretary Steven Mnuchin -- who is President Donald Trump’s point person on the talks -- negotiators are still attempting to iron out differences on specific language.

The package is expected to include paid leave, expanded food assistance, extended unemployment insurance and free coverage for coronavirus testing.

“It’s fair to say we’re close to an agreement, subject to the exchange of paper, and hope to have an agreement tomorrow,” Pelosi told reporters outside of her office this evening. “We’ve resolved most of our differences and those we haven’t, we’ll continue the conversation because there will be other bills.”

Asked if she was confident that there would be a vote on a deal on Friday, Pelosi responded: “One way or another.”

The patient is a man in his 70s who lived in a long-term care facility in Wyandotte County, Kelly said.

According to the governor, the man had other underlying health conditions and was receiving care at a local hospital before he died.

The man was not mobile, so the state is treating this as a case of community spread and health officials are now conducting public health contact tracing.

Some context: Kelly said this situation demanded that she declare an emergency, which will grant her administration the ability to activate state resources and mobilize personnel to assist where needed.

This death is the state’s fifth confirmed case of coronavirus.

Walt Disney World Resort in Florida and Disneyland Paris Resort will close at the end of the business day Sunday through the end of the month due to concerns over the coronavirus outbreak, the company said in a statement.

Disney Cruise Line will also suspend all new departures beginning Saturday through the end of the month, the company added.

Disney cast members will be paid during the closure period, and hotels and dining complexes at both Disney World and Disneyland Paris will stay open until further notice, according to the company statement.