President Trump declared a "national emergency" on Friday due to the coronavirus pandemic.

He said the action would "open up access to up to $50 billion," which he described as "a large amount of money for states and territories and localities in our shared fight against this disease."

President Trump is now speaking from the White House about the coronavirus pandemic.

Trump is likely to make an emergency declaration that would free up tens of billions of federal dollars to combat coronavirus, according to two people familiar with the decision.

AMC Theatres announced on Friday that they are proactively reducing the maximum capacity of each of its theaters by at least 50%, according to a press release.

Beginning Saturday through April 30, the movie theater chain will cap ticket sales for each of its theatre’s auditoriums to an amount equal to 50% of the normal seating capacity.

Adam Aron, CEO and President of AMC Theatres, said “with this action, we are facilitating the ‘social distance’ between guests who still want to see movies on a big screen.”

The company is also enhancing its cleaning protocols by cleaning “hightouch” point areas at least once per hour, the company said.

Denmark will temporarily close its borders for non-citizens in a move to curb the spread of coronavirus, the Danish prime minister Mette Frederiksen said on Friday.

"All tourists, all travel, all vacations, and all foreigners who cannot prove a creditable purpose of entering Denmark, will be denied entrance at the Danish border," Frederiksen said at a news conference late Friday in Copenhagen.

Boston and Miami will be added to the list of 11 airports that are being used to divert passengers traveling to the US from European regions that are part of a travel ban, a senior official with US Customs and Border Protection said.

Some background: President Trump announced the ban during an address on Wednesday. The ban would affect most foreign nationals who were in Europe's Schengen Area — 26 countries stretching from Iceland to Greece — in the past 14 days. American citizens, green card holders, some family members and a few other groups are exempt from the travel ban but will face additional health screening and restrictions when they arrive.

“They'll be screened and then we're going to ask every American and legal resident returning to the united states to self-quarantine for 14 days," Pence said.

These are the other airports:

Both are in quarantine.

Rodriguez said the Venezuelan government is ordering all passengers who traveled on Iberia flight 6673 on March 5 and 8 to go into “immediate obligatory quarantine.” 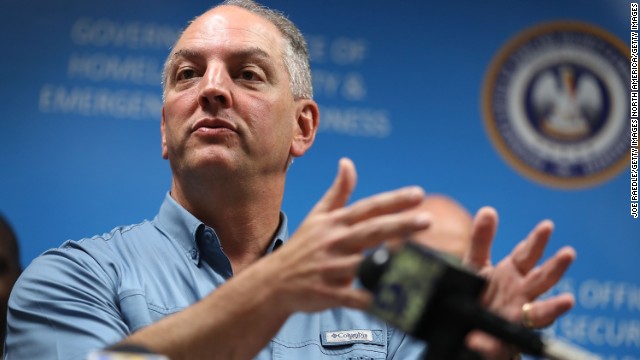 All K-12 public schools will be closed starting Monday and all gatherings of more than 250 people will be banned until April 13. Classes will resume on April 13, he said.

"We are at an inflection point now and we are going to take bold action to minimize the further spread of this illness. That is why I am issuing this order today, ending all events of more than 250 people, closing our schools, and reducing the amount of face-to-face public interaction at state government buildings,” Gov. Edwards said in a statement.

Correction: This post has been updated to include the correct photo of Louisiana Gov. John Bel Edwards.

Pelosi said the legislation "facilitates free coronavirus testing for everyone."

She added that the bill secures paid leave with two weeks of paid sick leave and family and medical leave "for those affected by the virus."

She said that the legislation will also strengthen unemployment insurance.

It's unclear if the White House supports this legislation.

Disney will pause production on some of its live-action films, according to a Disney studio spokesperson.

“While there have been no confirmed cases of COVID-19 on our productions, after considering the current environment and the best interests of our cast and crew, we have made the decision..,” the Disney studio spokesperson said.

Disney said that they will continue to assess the situation and restart “as soon as feasible,” the spokesperson said.