YouTube said on Friday it will reduce its streaming quality in the European Union and the United Kingdom to avert internet gridlock as thousands of people work from home.

The Google-owned video platform's measure will stay in effect in the EU and UK for 30 days. The decision is subject to review, a Google spokesperson said.

“We will continue working with member state governments and network operators to minimize stress on the system, while also delivering a good user experience,” a Google spokesperson said in a statement to CNN.

Thierry Breton, the EU's internal market commissioner, urged streaming platforms to cut the quality of their videos to prevent internet overload with so many people staying at home. Netflix announced its plans to reduce streaming quality yesterday.

“Millions of Europeans are adapting to social distancing measures thanks to digital platforms, helping them to telework, e-learn and entertain themselves,” Breton said in a statement Friday. “I warmly welcome the initiative that Google has taken to preserve the smooth functioning of the Internet during the COVID19 crisis by having YouTube switch all EU traffic to Standard Definition by default."

The numbers: Johns Hopkins University, which is tracking coronavirus cases reported by the World Health Organization and additional sources, puts the total number of infections worldwide at more than 244,500, with at least 10,000 deaths.

India asks citizens for their "full contribution": The south Asian country is trialing a curfew and urging people to stay at home in an attempt to contain the spread of the coronavirus.

South Korea to test all arrivals from Europe: While numbers in the East Asian country have dropped, authorities fear a second wave of cases imported from overseas. Hong Kong and mainland China also announced new controls on international arrivals this week.

China no new domestic cases: Mainland China recorded 39 new cases of coronavirus -- all imported from overseas -- on Thursday. It's the second consecutive day of no new domestically transmitted infections. It's also the second day in a row of no new confirmed cases in Hubei province -- ground zero for the pandemic.

Olympic Torch: The Olympic flame arrived in Japan on Friday, marking the beginning of official Olympic celebrations. The International Olympic Committee said cancelation is "not on the agenda" but the next few weeks could prove decisive in whether it will go ahead this summer.

Hong Kong airlines slash flights: Both the city's flag carrier, Cathay Pacific, and budget service HK Express are suspending the majority of their routes in the light of tight new restrictions on international travelers and a global drop in demand.

Italy death toll: The total number of fatalities reported in the country at the new epicenter of the outbreak has now surpassed China's death toll. The number of deaths in Italy reached 3,405 on Thursday -- 157 more than China's toll, which stands at 3,248.

A Chinese Australian woman has been fired from her job in Beijing and ordered by authorities to leave China after provoking outrage in the country for breaking coronavirus quarantine rules to go for a jog.

In a video widely circulated on social media, a woman in active wear gets into a heated argument with a community worker who tries to persuade her to stay at home. International arrivals are required to self-quarantine under Beijing's strict infection control rules.

"I need to go running. I need to work out. If I fall sick, who will take care of me? Will you come?" shouts the woman, as she tries to open the keypad lock on her apartment door. She appears to have just returned from a jog and is not wearing a face mask. 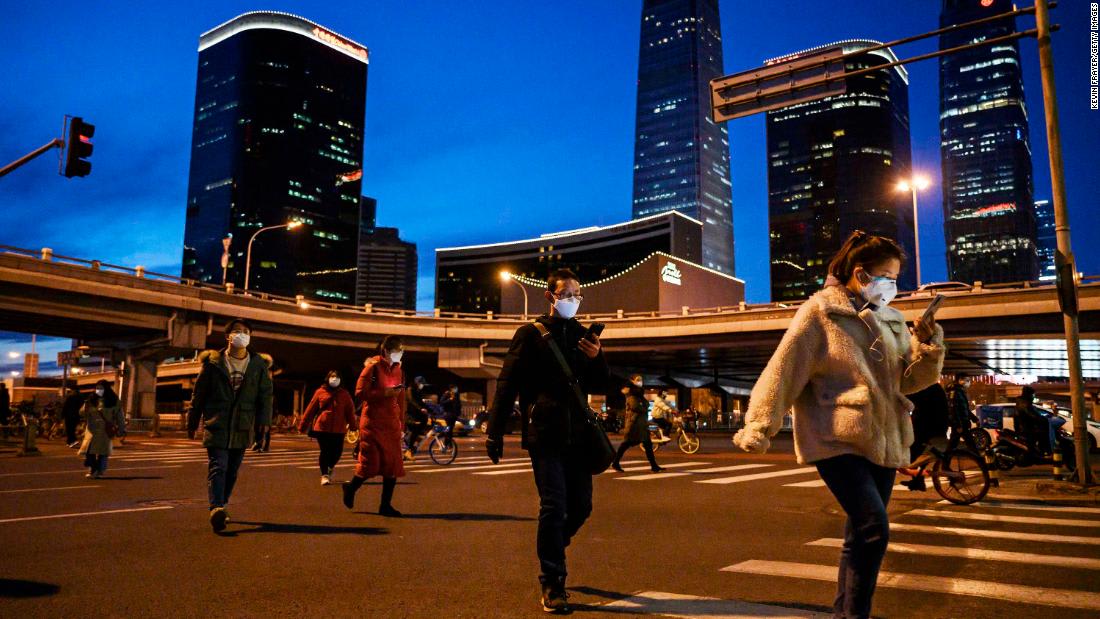 It's felt like a giant petri dish, a huge experiment in the British capital, these last few days amid coronavirus concerns.

London: A city that should be emptying, but where instead sidewalks and stores are crammed, and metro stations are closed. Rumors swirling of a 15-day lockdown mean nearly everyone you talk to is out panic-buying something, even if the government tries to insist "lockdown" is the wrong word.

The changing advice and the lack of widespread testing leave the collective impression here that it is either too late to stop what is happening, or something, inescapable and mammoth, is looming. This densely packed city of over 9 million simply can't make up its mind. Some shelves are empty, but some bars full.

"It looks as though London is now a few weeks ahead" of the rest of the country in the virus spread, Prime Minister Boris Johnson said out of nowhere on Monday. And given that the UK is meant to be a few weeks behind Italy, that gave the impression that collapse was imminent. But the lack of widespread testing here, means we -- and Johnson -- simply don't have the solid data, just the modeling. 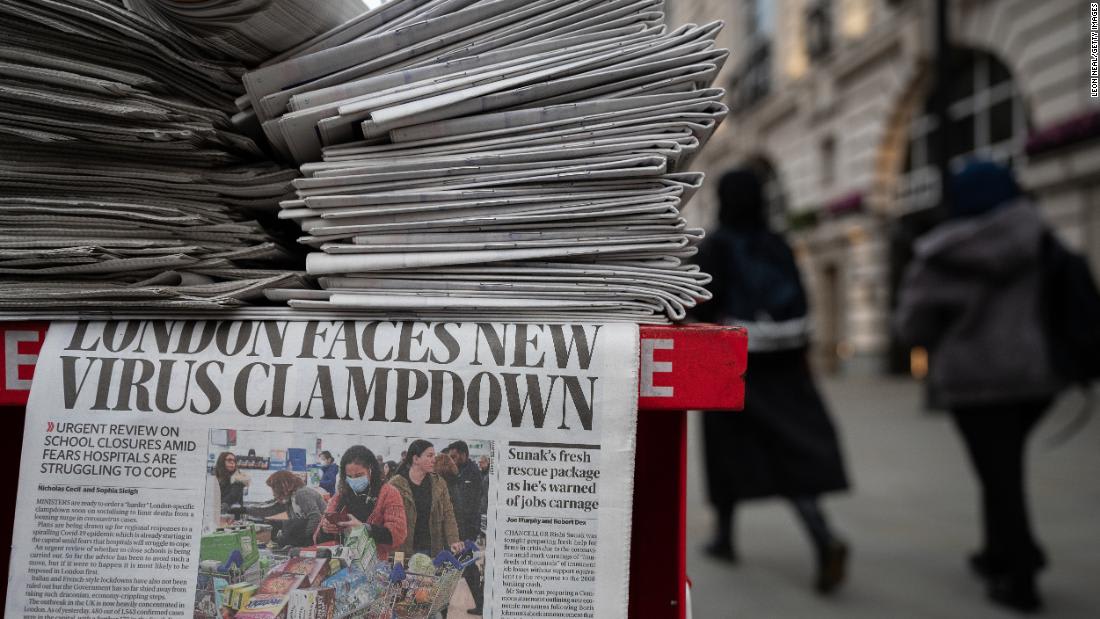 Cathay Pacific is canceling almost all passenger flights for two months as the novel coronavirus outbreak continues to decimate global demand for travel.

Hong Kong's flagship carrier announced Friday that it would reduce passenger flight capacity by 96% in April and May, saying it would start operating on a "bare skeleton" basis. Cathay Dragon, the company's regional airline, will also cut back by the same proportion.

The decision was made "in light of the severe drop in demand due to the ongoing coronavirus pandemic and multiple government travel restrictions," the company said in a statement Friday.

The reductions were largely expected. Cathay has already significantly shrunk capacity in recent months, cutting flights by 30% in February and 65% in March and April. The latest move extends previously announced cuts, the company said.

Last week, the company also reported brutal financial results for 2019, and warned that a "substantial loss" was projected for the first half of this year and that more flight reductions were likely. 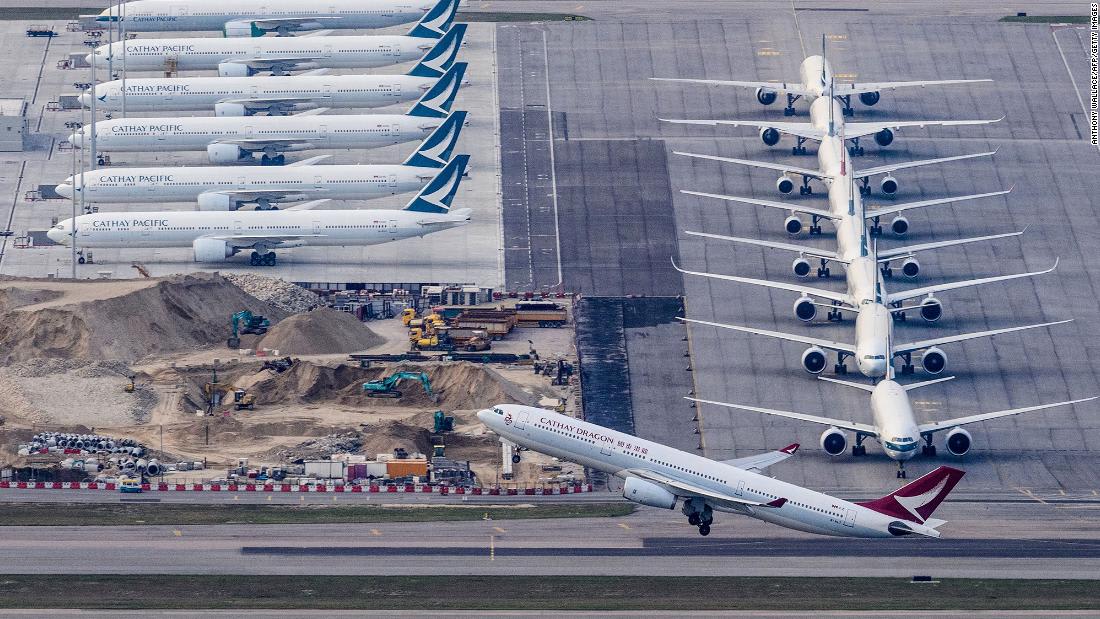 Thomas Bach, the president of the International Olympic Committee, said the organization is not considering canceling the quadrennial summer games in Tokyo due to the coronavirus.

He explained that the IOC is not making a decision yet because of the many question marks that remain surrounding the virus and its spread:

"What makes this crisis so unique and so difficult to overcome is the uncertainty. Nobody today can tell you what the developments are tomorrow, what they are in one month, not to mention in more than four months. Therefore it would not be responsible in any way to set a date or take a decision right now, which would be based on the speculation about the future developments."

Many of the world's biggest and most profitable sports leagues have postponed, delayed or canceled major events to help combat the spread of the virus, leading some to question if the Olympics should be held. The Games are set to begin in late July.

Read more about what could happen to the Olympics here

With cherry blossom season just kicking off in Japan, this would normally be a time where people flock to flower-viewing parties known as “hanami.”

But as authorities discourage large public viewings amid fears over the spread of the coronavirus pandemic, one website has come up with a creative solution.

They want everyone to experience Japan’s most beloved sakura spots virtually.

Weather News, which follows the cherry blossom trail as the flowers start blooming from Japan’s southwest until gradually making their way north, has uploaded dozens of free “hanami VR” videos.

These give those stuck inside a chance to experience everywhere from Kyoto’s Arashiyama neighborhood and Onshi park in Tokyo’s Ueno neighborhood to Osaka castle park and the moat of the Imperial palace in Tokyo from the safety of their own homes.

Cherry blossoms or “sakura” are celebrated in Japanese literature and art. As they bloom briefly, in Japan, they’re viewed as a metaphor for the ephemeral but beautiful things in life.

Asian low-cost airline HK Express is temporarily suspending all flights scheduled for March 23 to April 30 due to the coronavirus outbreak.

The carrier, which was acquired by Hong Kong-based Cathay Pacific last year, said in a news release that its decision was made "in light of the significant drop in travel demand" amid growing travel restrictions imposed by Hong Kong and various other governments across the world to curb the spread of the virus.

"Given all the challenges we have been facing, preserving our cash position is key to make sure we stay together as team," CEO Mandy Ng said.

Indian Prime Minister Narendra Modi asked all 1.3 billion people in the country to be vigilant and work together to combat the spread of the novel coronavirus in his televised address to the nation Thursday.

"We need to put in all our capacity and capability in protecting ourselves from the coronavirus," Modi said. "Everyone is contributing in their own way in the fight against this global pandemic. You too, must give your full contribution."

Modi made nine specific requests to both his people and the government -- a likely nod to the Hindu festival of Navaratri, which means nine in Sanskrit.

Here's what the Prime Minister requested: