Spanish authorities expect the so-called "peak" of the Covid-19 pandemic in the country to happen as soon as Wednesday.

Enrique Ruiz Escudero, senior health official of Madrid's Regional Government, told radio COPE on Monday that the number of cases in the country is expected to begin decreasing by the end of this week.

"We believe this week we'll reach the famous ‘peak’ - in which we see new cases, but less than the day before," he said.

Escudero explained the estimate is based on the correlation between the virus' maximum incubation period (14 days) and the beginning of isolation measures and school closures across the country.

Health workers test positive: Escudero also added that in Madrid, 600 health workers tested positive for Covid-19, and 1,400 others who were in direct contact with infected patients and are in preventive home isolation.

Nursing homes infected: Around 20% of all nursing homes in the Spanish capital of Madrid have registered cases of Covid-19, Ignacio Aguado, the Vice President of Madrid's regional government told radio "Onda Cero" Monday.

"The problem is that the people who live there are very vulnerable: our elderly. When the virus gets in there, it's devastating," he said.

Germany has reported 86 deaths and a total of 22,672 cases of novel coronavirus on Monday.

Lothar Wieler, the president of the Robert Koch Institute, the national agency for disease control and prevention said the average age of those deceased is 82 years old.

As Germany's cases continue to rise, Wieler once again pleaded for citizens to practice social distancing.

“Please keep a distance of at least 1.5 to 2 meters, please stick to the hygienic rules, wash your hands and sneeze into your elbow," Wieler said.

"In Germany we have a lot of test capacity, in comparison to other countries," he said. "Our test capacity is increasing all the time, the tests itself are there, but we have to test with a target.”

Health officials in Nigeria have issued a warning over chloroquine after they said three people in the country overdosed on the drug, in the wake of President Trump's comments about using it to treat coronavirus.

A Lagos state official told CNN that three people were hospitalized in the city after taking the drug. Officials later issued a statement cautioning against using chloroquine for Covid-19 treatment.

Drug not approved: President Donald Trump claimed at a White House briefing last week that the Food and Drug Administration had approved the "very powerful" drug chloroquine to treat coronavirus.

The FDA after the briefing issued a statement saying it had not approved the drug for use against Covid-19 and is still studying its effectiveness against the disease.

Price hikes: After Trump's comments, there was a surge of interest among people in Lagos keen to stock up on the medication, which has led to price hikes in the megacity of around 20 million inhabitants.

One man told CNN that in a pharmacy near his home on the Lagos mainland, he witnessed the price rise by more than 400% in a matter of minutes.

No evidence: The Lagos State Health Ministry issued a brief statement saying there was no "hard evidence that chloroquine is effective in prevention or management of coronavirus infection."

What is it used for? Chloroquine is used to treat malaria, lupus and rheumatoid arthritis. 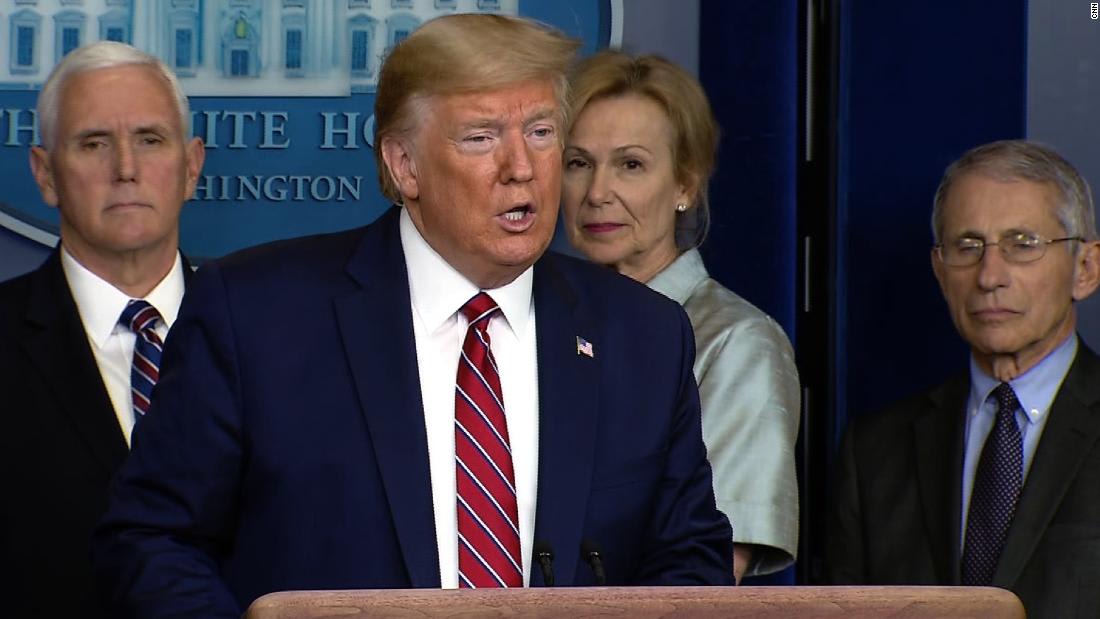 In Washington's new war, the coronavirus pandemic is out-sprinting frantic government efforts to cope with its tragic humanitarian and grave economic toll.

A failed Senate vote on a mammoth stimulus bill amid acrimony between Republicans and Democrats came as the virus trimmed the GOP majority with five members quarantined.

State and local leaders and front-line health workers meanwhile pleaded with President Donald Trump to rush lifesaving medical gear to them and their patients as US infections topped 32,000.

Trump responded, announcing the dispatch of large quantities of medical equipment to hard-hit states, and showed signs of settling into his role in offering compassion to a fearful nation -- before digressing into his normal political grudges.

A dark and disorientating weekend that stretched federal and local governments, the economy and the health care system to a breaking point, served to clarify the mind-numbing scale of the worst domestic crisis to hit the nation since World War II.

It ended with deeply ominous questions about the economy -- which appears to be tumbling into the abyss, and with fresh doubts over the President's capacity to lead and reassure the nation.

There are at least 34,354 cases of novel coronavirus in the United States, according to CNN Health's tally of cases that are detected and tested through US public health systems.

At least 414 people have died. The total includes cases from all 50 states, the District of Columbia and other US territories, as well as all repatriated cases.

At least seven states have 1,000 cases or more:

South Korea reported 64 more coronavirus cases from Sunday, raising the national total to 8,961, the Korea Centers for Disease Control and Prevention said on Monday in a news release.

It's the lowest daily figure since daily reported cases peaked at 909 on February 29.

The national death toll stands at 111, with seven deaths added on Sunday.

Among the 64 new cases, 24 are from Daegu, 14 from Gyeonggi Province, and 13 were confirmed through airport screening, according to the news release.

Millions of people across India have been placed under lockdown until the end of the month as efforts to halt the spread of the novel coronavirus in the country intensify.

Residents living in 75 districts across the country, including in major cities such as the capital New Delhi, Mumbai, Bangalore, Chennai, Hyderabad, and Kolkata have been placed under travel, work and movement restrictions until March 31.

Using data from the latest government census, which took place in 2011, more than 750 million people will be impacted by the new restrictions. Given that the data is from nine years ago, the actual number of people affected is likely to be much higher.

In the New Delhi metropolitan area, more than 16 million people have been asked to stay inside their homes. Public transportation, including the metro and rickshaws, have been suspended, and all shops, factories, places of worship and offices have been shut.

More than 12 million people could be affected in the city of Mumbai and 9 million in Bangalore, according to the census data.

The numbers: At least 341,000 people have contracted the novel coronavirus and over 14,700 have died, according to a tally by Johns Hopkins University, which is tracking cases recorded by the World Health Organization and additional sources.

Hong Kong introduces new controls: The city will ban most non-residents from entering as it struggles to contain a new wave of infections. Other parts of Asia have also introduced new measures this week amid fears of imported cases.

Olympic dreams hang by a thread: For the first time Monday, Japanese Prime Minister Shinzo Abe acknowledged that Tokyo 2020 may have to be postponed. Canada has already said it won't send a team even if the Games go ahead this year as planned.

US relief bill delayed: A key Senate vote related to a massive economic stimulus plan in response to the pandemic has been pushed back as lawmakers continue to wrangle over its contents.

Stock markets take a hit: European markets opened lower on Monday as the US Senate stalled on the stimulus plan for the US economy. The main markets all opened around 3% to 4% down, following losses in Asia and a big drop in US futures.

Indian cities go into lockdown: The capital New Delhi is among 75 districts in the country that will go into lockdown until March 31 in response to the coronavirus pandemic. Several districts are now enforcing a pre-existing law that makes it a punishable offence for four or more people to gather.

Australia urges halt to domestic travel: More than a thousand cases have been reported in the country as Prime Minister Scott Morrison announced the closure of non-essential businesses and urged people to avoid domestic travel. It's only the latest blow to Australians after an intense summer of wildfires in what Morrison described as "the toughest year of our lives."

Correction: This post has been updated to reflect that most travelers to Hong Kong will be banned from entering the territory from midnight on Wednesday.

Crowds descended on California beaches, hiking trails and parks over the weekend in open defiance of a state order to shelter in place and avoid close contact with others.

Instead, many public spaces were packed, prompting officials in some cities to order parks, recreation areas and beaches to close.

In response to the crowds, Los Angeles Mayor Eric Garcetti announced on Twitter late Sunday that he was closing sports and recreation at all LA City Parks. He said people should heed the closures and stay home.

"This weekend we saw too many people packing beaches, trails and parks," the mayor tweeted. "That doesn't mean gather elsewhere. This is serious. Stay home and save lives."

California is one of eight US states that have issued stay at home orders. Several countries around the world have also put in place similar measures.