The first case of coronavirus has been confirmed in Cox’s Bazar, Bangladesh.

According to the United Nations refugee agency, a local Bangladeshi woman was confirmed to be positive on Tuesday afternoon local time.

The hospital in the town of Cox’s Bazar is around one hour’s drive from sprawling camps which are home to nearly one million Rohingya refugees.

Many of them fled across the border to Bangladesh to escape violence in neighboring Myanmar. Currently, no coronavirus cases have been identified among Rohingya refugees, Louise Donovan, communications officer for UNHCR, told CNN Wednesday.

"The health and well-being of refugees is our top priority," Donovan said.
"While there are currently no suspected cases of Covid-19 in the camps, UNHCR takes the situation very seriously and is closely monitoring."

On Tuesday, the Bangladeshi government confirmed that most services in the refugee camps would be suspended, in an attempt to prevent an outbreak of the virus.

Mahbub Alam Talukder, the refugee relief and repatriation commissioner, confirmed to CNN that non-essential activities would stop, including educational programs and other advocacy work carried out by NGOs.

However, emergency work would continue. Nay San Lwin, a Europe-based Rohingya activist, said that markets in the camps had been closed, making it hard for the families to gather supplies.

"As markets are ordered to close, prices go up," Nayheld CNN. "Refugees are really worrying, but helpless."

All people entering and exiting the camps are now being closely controlled, Talukder said.

They have 47 beds ready and 342 beds on standby for potential coronavirus patients.

Talukder added that a Rohingya family of four from Australia -- who came to visit their relatives in one of the refugee camps -- was put in quarantine under UNHCR supervision.

Donovan said hygiene measures, communication and staff training have all been increased inside the camps, and planning is underway for additional medical facilities.

"There is an extremely limited capacity in Cox’s Bazar district to provide intensive care treatment for any medical condition, such as Covid-19," Donovan said.
"However, efforts are currently being employed to expand the existing treatment capacities, including higher levels of treatment in the camps."

Bangladesh currently has 39 confirmed cases of coronavirus, four of whom have died, data from the Johns Hopkins University shows. Myanmar confirmed its first two cases on Tuesday, imported from the UK and US, state-run newspaper Global New Light of Myanmar reported.ed.

At 11:59 p.m local time, New Zealand's alert Level 4 will go into force, placing "the most significant" restrictions on its people "in our modern history," Prime Minister Jacinda Ardern said.

A national state of emergency has been declared, schools will close, people have been told they must stay at home and non-essential businesses will shut.

The order comes as cases in the country rose by 30% on Wednesday. But with just 205 coronavirus cases reported in total and no deaths, New Zealand is responding much faster than other countries around the world.

In her statement announcing the measures, Arden acknowledged no other country has moved as fast to restrict daily life, but the trigger was early evidence of community transmission in New Zealand.

"Unlike so many other gravely inundated countries, we have a window of opportunity to stay home, break the chain of transmission, and save lives. It’s that simple," she said.

Flattening the curve: Ardern said the country needed to get "ahead of any potential over-run of our hospitals, and ahead of any deaths on New Zealand soil."

Break the chain: "You may not be at work, but that doesn’t mean you don’t have a job. Your job is to save lives, and you can do that by staying home, and breaking the chain," she said.

Act like you have Covid-19: "Every move you then make is a risk to someone else. That is how we must all collectively think," Ardern said.

New Zealand's swift action marks a drastic departure from some countries, such as the UK and US, which have been criticized for not acting quickly enough to stop outbreaks from accelerating in their own nations.

South Korea will require passengers arriving from the United States to undergo a 14-day quarantine starting from Friday.

Those arriving who have residence in South Korea will be allowed to stay at home, while those without will be required to stay in a government facility, the Central Disaster Relief Headquarters’ Disease Prevention team leader Yoon Tae-ho said on Wednesday.

In addition to the quarantine, short-term stay foreigners will be tested for the virus during entry procedures and will be allowed into the country if their test comes back negative.

South Koreans and long-term stay foreigners without symptoms will also be tested if they show any symptoms during the 14-day quarantine. They will be tested immediately upon arrival if presenting with coronavirus symptoms.

The government will continue monitoring the number of imported cases from the US and consider testing all arrivals if necessary.

A record deal: White House and Congressional leaders worked into the early hours of Wednesday morning to strike a deal on a $2 trillion stimulus package to give the US economy a much needed respite from the dire effects of the coronavirus pandemic and the measures enacted to limit its spread. More than 52,000 people have been infected with the virus throughout the country.

In the past 24 hours, the elements of the proposal have come into sharper focus -- $250 billion will be set aside for direct payments to individuals and families, $350 billion in small business loans, $250 billion in unemployment insurance benefits and $500 billion in loans for distressed companies.

Ordered indoors: The stimulus comes as more than half the population of the United States has been put under travel restrictions to stop the spread of the coronavirus. At least 15 states and 30 municipalities have ordered more than 166 million people, or 51% of the US population to stay home, according to data compiled by CNN using US Census population estimates.

At least two additional states and five municipalities will have orders going into effect later this week. When those take effect, more than 180 million people -- 55% of the US population -- will be impacted.

Billions at home as borders shut: It's not just the US -- 2.5 billion people worldwide are under coronavirus-related movement restrictions. Countries worldwide are asking citizens who do not work in "essential services" to stay at home unless absolutely necessary.

The most audacious of all these stay-at-home orders is likely in India, which has asked the majority of its 1.3 billion population to stay home for 21 days.

Manchester City manager Pep Guardiola has donated €1 million ($1.1 million) to help with the fight against the coronavirus in his native country Spain, a spokesperson for the English Premier League soccer club confirmed to CNN.

Spain is one of the worst hit countries from the pandemic.

Deaths from Covid-19 in Spain rose to 2,696 Tuesday with 39,673 cases recorded in total, according to health ministry data.

Spain has the third largest number of Covid-19 deaths of any country in the world, behind Italy and China.

South Korea’s health agency says the country can export testing materials as long as it doesn’t impede its own fight against Covid-19.

The director of the Centers for Disease Control and Prevention, Jung Eun-kyeong, said it was her understanding that the United States had requested diagnostic reagent for Covid-19 during South Korean President Moon Jae-in’s call with President Donald Trump Tuesday.

“Five diagnostic reagents have received emergency use approval, so nearly 20,000 tests are being conducted every day in South Korea, “ Jung said at a news conference Wednesday. “We can support as long as it does not impede the domestic prevention of the epidemic.”

Karl-Anthony Towns of the NBA's Minnesota Timberwolves said that his mother contracted coronavirus and is currently in a coma.

Towns said that his mother went to the hospital after not improving over a period of a couple days.

"She kept getting worse," Towns said. "Her fever was never cutting from 103, maybe going down to 101.9 with the meds ... her lungs were getting worse, her cough was getting worse. She was deteriorating."

Towns said that there was a day where it appeared his mother had turned a corner, but the condition of her lungs deteriorated further and she needed to be put on a ventilator.

She was later put in a medically-induced coma.

The two-time NBA All-Star shared his mother's story on social media in order to emphasize just how serious the global pandemic is.

"The severity of this disease is real. This disease needs to not be taken lightly. Please protect your families, your loved ones, your friends, yourself. Practice social distancing. Please don't be in places with a lot of people.

The organizers of a mixed martial arts competition held in front of 6,500 fans at an indoor arena in Japan are facing a backlash after ignoring calls for its cancellation.

“It is regrettable (that the event went ahead), as we asked them several times for cooperation,” Saitama Governor Motohiro Ono said in a statement.

Saitama prefecture requested the event be canceled before it was held and relayed the message to the Saitama Super Arena, which provides guidelines to events organizers on its website, but does not enforce a ban on public gatherings.

The K1 event organizers insisted they would take adequate measures to protect the thousands of attendees from the novel coronavirus by providing masks and making sure hand sanitizer was available, in a statement released on March 19.

On that same day, a central government expert panel called on organizers of large-scale events to exercise caution, including canceling plans, to prevent the spread of the coronavirus.

The country has also declared a state of national emergency.

The move comes as coronavirus cases in the country jumped by 30% on Wednesday, according to Ashley Bloomfield, New Zealand’s director of health. There were 47 new confirmed cases and three new probable cases, bringing the country’s count up to 205.

On Wednesday evening, New Zealanders received the following emergency alert on their phones. The message tells citizens to "act as if you have Covid-19."

"This message is for all of New Zealand. We are depending on you," it reads.

The alert signs off with the Maori phrase “Kia kaha," which means stand tall, or stay strong. 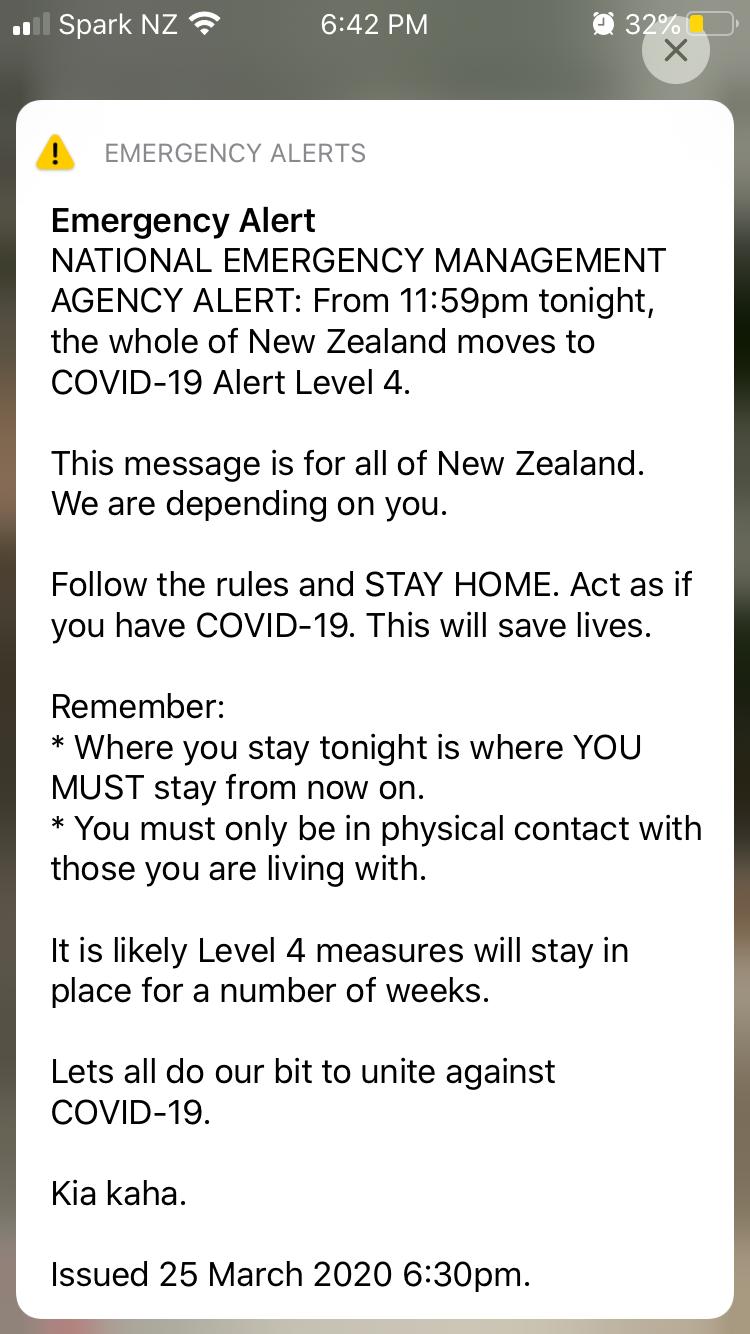