Prince Charles has been advised he was contagious with coronavirus starting on March 13, a royal source said today.

Clarence House said in a statement earlier that Charles has tested positive for coronavirus and is now self-isolating in Scotland.

The Palace said the monarch is in good health, but did not say if she had been tested. The Queen is 93 years old, and her husband, Prince Philip, is 98.

The royal source asked not to be named discussing the royal family’s medical conditions.

Roger Federer has announced he and his wife Mirka will donate 1 million Swiss Francs — or about $1.02 million — to help the most vulnerable families in Switzerland impacted by the Coronavirus outbreak.

“These are challenging times for everyone and nobody should be left behind”, the 20-time Grand Slam tennis champion said in a post on Instagram.

Federer’s donation comes as sports stars, clubs and associations from around the world continue to help relief efforts amid the ongoing pandemic.

Pep Guardiola – who manages the defending English Premier League champions, Manchester City – has donated €1 million, or $1.08 million, to help with the fight against Coronavirus in his native Spain.

The novel coronavirus appears not to be mutating quickly, according to at least one scientist.

Vineet Menachery, a scientist at the University of Texas Medical Branch, said there was no evidence that there have been any mutations that will make the virus more virulent or more transmissible at this point.

Speaking at a press briefing held by the American Society for Microbiology on Tuesday, Menachery said:

There are a handful of small mutations but nothing that seems to improve its ability to cause disease or transmit. This is consistent with what we see with coronaviruses. During the SARS outbreak, after the initial jump from animals to humans, it quickly set itself as a very similar virus across all the strains and so the virus is not having a selective pressure to change and so we're not anticipating huge changes that would make it more deadly or more virulent.

Tokyo governor Yuriko Koike has urged residents in the city to avoid making "non-essential outings" this weekend as the city reported an increase in its number of novel coronavirus cases.

Speaking at a news conference on Wednesday, Koike said it is now a "critical moment" to stop the infection rate from climbing. Tokyo residents are advised to work from home as much as possible, avoid social contacts and crowded places and refrain from going out at night to reduce the risk.

As of Wednesday evening local time, Tokyo reported 41 new cases of novel coronavirus, according to Koike.

Pakistan’s Prime Minister Imran Khan has been consistently rejecting calls for a nationwide lockdown claiming that an all-out closure of businesses would affect the “25% of the population that lives below the poverty line,” the country's daily wage earners who Khan said would lose their incomes in a heartbeat.

But for all intents and purposes, a lockdown is what seems to be in place in Pakistan:

This included the suspension of public transport, timed closure of gas stations and military troops deployed in all major cities to enforce these measures.

According to figures released by Pakistan’s Ministry of Health the number of patients diagnosed with coronavirus in Pakistan crossed 1,000 today. Ten days ago that number was at 53. At least seven people are also confirmed dead.

All major phone networks have changed their call tunes to messages asking people to wash their hands and the state TV has messages in regional languages explaining the importance of social distancing.

Mosques however have not been closed down and one of the largest clusters of the virus sprung up in the outskirts of the capital where a large congregation of preachers met, disregarding the government’s requests for three or more people not to gather in a public space.

Dr. Arshad Altaf, a public health specialist told CNN that there are roughly less than 3000 ventilators available in the entire country and while China has provided aid worth $4 million to Pakistan, alongside medical face masks and ventilators, this is still not enough to deal with the exponential growth of the virus.

Pakistan’s National Disaster Management Authority which is connected to the military has taken over the reins in dealing with the crisis and Altaf welcomed the move, “there has to be a multi-pronged effort, the govt cannot deal with this alone”

A state of emergency for Thailand will come into effect starting tomorrow, as the country combats the novel coronavirus outbreak, Prime Minister Prayut Chan-o-cha announced on Wednesday.

The state of emergency will be in place until April 30.

Prayut said supplies of food and other necessities will be "adequately available," and urged citizens to comply with the order to prevent the virus from spreading in the community.

However, he did not specify what new measures will be implemented.

"Some may feel they lose their rights and freedom, but this is for protecting you, your family’s lives, and that of every Thais," he said.

"If everyone understands, follows strictly and seriously, soon I am confident we will pass through this crisis together."

Peskov told reporters in a conference call that Putin had canceled a flight to St. Petersburg to work on the text of the speech and would address citizens in the coming hours.

The announcement followed a visit by Putin on Tuesday to a hospital for coronavirus patients in Moscow and a meeting with his top economic and political advisers.

Putin has previously insisted his country managed to stop the mass spread of coronavirus -- and that the situation was "under control," thanks to early and aggressive measures to keep more people from getting the disease. 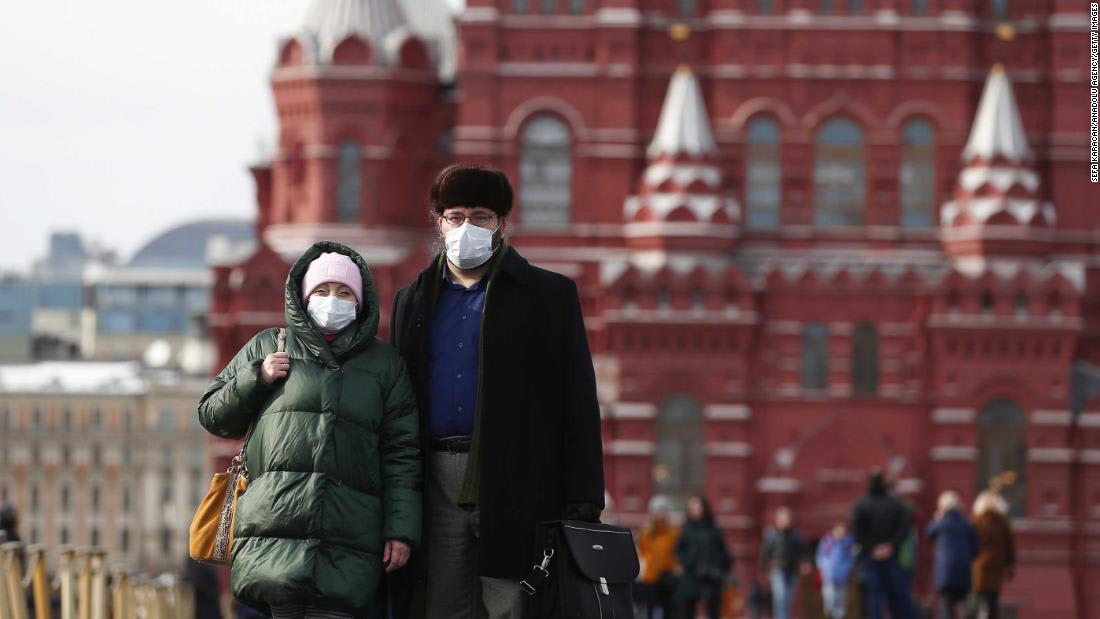 Why does Russia, population 146 million, have fewer coronavirus cases than Luxembourg?

A record deal: White House and Congressional leaders worked into the early hours of Wednesday morning to strike a deal on a $2 trillion stimulus package to give the US economy a much needed respite from the dire effects of the coronavirus pandemic and the measures enacted to limit its spread.

Spain's death toll climbs: Spain has overtaken China in the number of Covid-19 deaths, rising to the second highest worldwide after Italy.

Italy surpasses Hubei, issues jail threat: Italy now has more confirmed cases than the Chinese province of Hubei, the original epicenter of the pandemic. Rome announced strict new punishments to try and clamp down on the outbreak, including possible jail time for people who have the virus and violate quarantine.

Prince Charles tests positive: The Queen's son and the first in line to the British throne has tested positive for coronavirus and is now self-isolating in Scotland.

India lockdown: 1.3 billion people have woken up to a nation-wide lockdown in India. Under the new rules, all Indians must stay at home and all nonessential services such as public transport, malls and markets will be shut down for 21 days.

US sees deadliest day: At least 163 people died Tuesday, bringing the US death toll past 700, as the WHO warned the country could be the next epicenter of the virus. More than 52,000 people have been infected with the virus throughout the country.