Demand for coronavirus tests at some US commercial labs continues to exceed capacity, even as millions of tests have become available. Test turnaround times range from 24 hours to a week or more, according to labs contacted by CNN.

Quest Diagnostics: One of the largest US clinical laboratories said current turnaround time for coronavirus tests is on average four to five days, from the time of specimen pickup to the time results are delivered, though some results may not be provided for about a week.

“Although we are rapidly expanding testing capacity, demand for the testing is growing faster, and we cannot accommodate everyone who wants testing and meet tight turnaround time expectations,” Quest said in a statement.

Eurofins: A spokesperson for laboratory network Eurofins said its labs are running up to 5,000 tests a day, many in 24 hours, but also said, “due to the backlog, unprecedented demand, pressures on our supply chain, and shipping delays … our turnaround time has been pushed beyond what we normally experience. At most, we are looking at results in 72 hours.”

BioReference Laboratories: While there had been a backlog in its facilities, the company said it has cleared it within a week of making their testing for Covid-19 available and cut its turnaround time to 24 hours for inpatients and 48 to 72 hours for the general public.

Dr. Alex Greninger, an assistant professor at the University of Washington's Department of Laboratory Medicine, said unprecedented demand is the driving factor of such wait times for test results.

Faster delivery of tests is critical to conserve personal protective equipment, he said.

“It’s not just about testing but about getting results in a clinically actionable time frame. The faster you get results, the less protective equipment you use and the quicker you can get a patient properly isolated,” Greninger said.

With less than four months to go until the scheduled start of the Olympic Games on July 24, the fanfare around Tokyo 2020 had been well underway.

Tokyo was already covered with posters and fliers, hotels to house tourists were ready to receive guests and new venues like the Olympic stadium had been built. Tickets had been selling quickly among residents, too.

But then the coronavirus pandemic accelerated around the world.

Doubts set in: Nearly 70% of people in Japan did not expect the Games to be held as scheduled, according to a Kyodo News survey conducted last week.

This film predicted it: As speculation mounted over the Games' fate, a scene from the iconic 1988 anime film “Akira,” which spookily predicted not only Tokyo 2020, but that it would be canceled, trended online.

Postponement announced: A growing chorus of teams and athletes called for the Games to be postponed. That announcement finally came on Tuesday, when IOC president Thomas Bach and Japanese Prime Minister Shinzo Abe announced the Games’ postponement to 2021. They agreed to keep the name as Tokyo 2020 and said the Olympic flame would stay in Japan.

Unprecedented: The Olympics have never been rescheduled in peacetime. In 1916, 1940 and 1944, the Games were canceled because of world wars.

Questions remain: Japan must now prepare for the mammoth task of rescheduling the Olympics, but it is unclear who would cover the additional costs arising from the Games’ postponement.

Australia’s national identity is largely shaped by its geography. The land and people are, as the country’s national anthem states, “girt by sea” -- protected from the trials and tribulations of the outside world by oceans and distance.

The novel coronavirus pandemic, however, is perhaps the greatest challenge to that theory Australia has faced, unprecedented in the history of the world’s only continent-country.

By cutting off international flights, Australia has effectively lifted the drawbridge and isolated itself from the rest of the world.

To date, more than 2,300 people have been infected there, according to a tally by Johns Hopkins University. Prime Minister Scott Morrison’s government also established widespread restrictions on social gatherings, shutting bars, gyms and movie theaters and restricting restaurants to delivery or take out.

“There are many challenges we are facing now, which we’ve already discussed. But there are going to be many more and some of them yet haven’t even revealed themselves as to what the nature of those challenges are going to be,” Morrison said Wednesday.
“What as a government we’ve been seeking to do is put in place the right advice, the right structures, the right disciplines, the right processes, to ensure that we can make the best possible decisions that can stick and will ensure that we can best manage this crisis.”

Japan’s Prime Minister Shinzo Abe has spoken with President Donald Trump in a phone call about the postponement of the 2020 Olympic Games.

"Prime Minister Abe explained about the one-year postponement for the safety and security for the athletes, and the agreement of having the Olympics by end of 2021 summer," said Japan’s Chief Cabinet Secretary Yoshihide Suga, who spoke to the media following the 40-minute call.
"President Trump repeatedly mentioned the postponement was wise and excellent decisions. Both leaders confirmed close cooperation for the Tokyo Olympics to be held in complete form as the proof (of) human beings' victory in the fight against the coronavirus," Suga said.

Abe and Trump also spoke about cooperation for the development of a medical cure for the coronavirus.

With stores closed, runway shows canceled and global supply chains disrupted, much of the fashion industry has been rendered idle by the coronavirus pandemic.

Now, designers, luxury labels and fashion conglomerates are all stepping up to help overcome shortages of masks and other personal protective equipment (PPE) in some of the hardest-hit countries.

In the US, where health officials have warned that stockpiles of medical equipment may be insufficient despite manufacturers ramping up production, some medical workers have been forced to reuse masks between patients and even make their own.

New York Governor Andrew Cuomo took his appeal for assistance in the country's worst-hit state to Twitter, writing: "We need companies to be creative to supply the crucial gear our healthcare workers need."

His call was answered with offers to retool production and put sewing teams and unused resources to good use.

One of the first to respond was designer and "Project Runway" alumni, Christian Siriano. "If @NYGovCuomo says we need masks my team will help make some," he tweeted. "I have a full sewing team still on staff working from home that can help."

Just days after his online exchange with Cuomo, the designer posted a video of face mask production already underway. 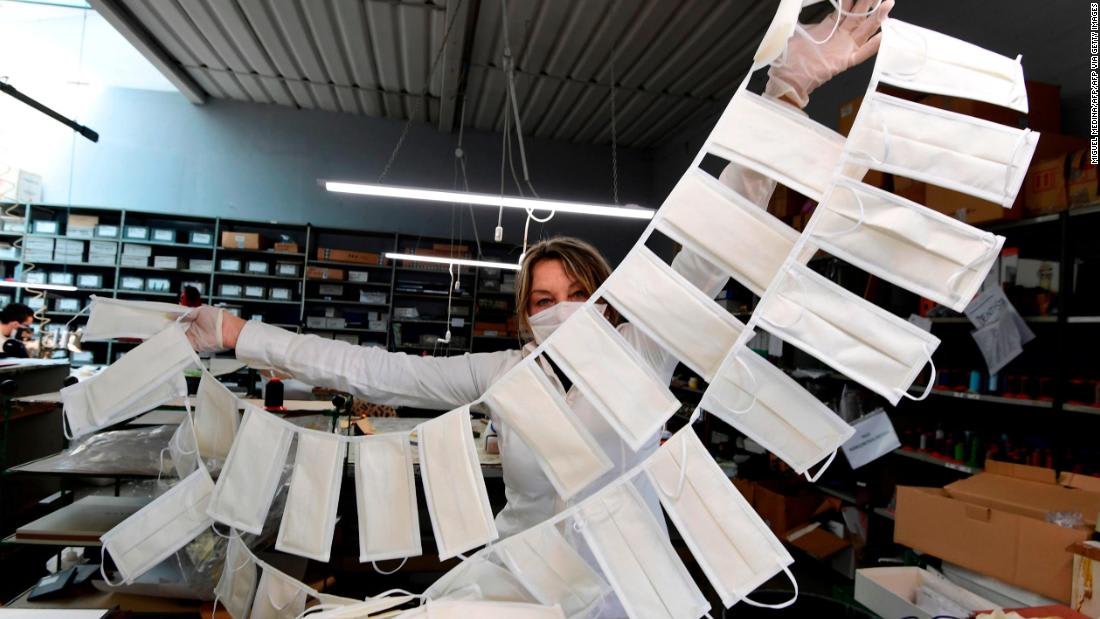 A US Federal Emergency Management Agency Administrator (FEMA) employee has tested positive for coronavirus, a spokesperson said on Tuesday.

FEMA is leading the federal operations for the coronavirus response on behalf of the White House task force, which is headed by Vice President Mike Pence.

Pence and other task force members were in the FEMA headquarters building in Washington around the same time as the infected employee, the spokesperson said.

However, FEMA said the employee did not come within six feet of the vice president or any other taskforce principal “for any period of time.”

"All areas visited by the vice president and other task force members were disinfected prior to their visits," the spokesperson said.

Pence and second lady Karen Pence both tested negative for the virus Saturday afternoon after a staff member of his office had tested positive.

The United States' coronavirus task force is receiving plenty of feedback from public health experts who are sounding the alarm over easing the social distancing guidelines next week, a source familiar with the matter said.

Although President Donald Trump has talked about reopening the country by Easter, the President hasn’t reached a final decision on exactly when the government’s guidelines would be relaxed to get the economy back up and running, the source told CNN.

Trump is hearing from advisers who are urging him to make Easter more of an “aspirational date,” the source added. When the President talked up the idea of packing churches on Easter, the source continued, he knew it was more wishful thinking than a realistic goal.

“He was being himself,” the source said.

The current thinking is that it’s unlikely Trump will relax the social distancing guidelines next week, when the 15-day period for those measures is scheduled to come to an end.

That kind of a move would likely spark fierce debate inside the task force, the source said.

Expanding testing: One idea being discussed inside the task force is dramatically expanding self-testing for the coronavirus on a massive scale, the source said.

That would provide public health experts with a wealth of data to make more informed decisions about restarting the economy.

The problem right now, the source said, is that very little data is available due to the slow rollout of testing across the country.

“We don’t have the testing to know what’s going on,” the source said.

As of 11:45 p.m. ET, there have been more than 422,000 people infected by the novel coronavirus worldwide, and over 18,900 have died, according to a tally by Johns Hopkins University, which is tracking World Health Organization (WHO) figures and additional sources.

Mainland China still has the most cases of any country -- as of the end of the day Tuesday 81,218 people there have been infected, 3,281 of whom died and 73,650 of whom recovered -- but the numbers in hard-hit Italy are getting closer. More than 69,000 people have been infected in Italy and at least 6,820 have died, according to Johns Hopkins.

The next epicenter: While Italy is the current epicenter of the virus, the WHO said it is possible it could shift to the United States. Last Wednesday, there were about 3,500 cases in the US, according to the WHO.

As of late Tuesday night ET, the country has at least 52,976 cases across all 50 states, the District of Columbia, Guam, Puerto Rico and the US Virgin Islands, according to a CNN tally. At least 705 people have died, including 210 in New York, 123 in Washington state and 46 in Louisiana.

The increase is likely due in part to both the virus' exponential spread and increased testing efforts country-wide.

The planet stays home: To combat the virus' spread, authorities across the US are ordering most residents to stay at home -- 55% of the nearly 330 million people living in the country will be subject to such measures. They're not alone -- a staggering 2.5 billion people -- nearly a third of the world’s population -- are under coronavirus-related movement restrictions. The most audacious of all these stay-at-home orders is likely in India, which has asked the majority of its 1.3 billion population to stay home for 21 days.

The 2020 Games, in 2021: On Tuesday, the International Olympic Committee president Thomas Bach and Japanese Prime Minister Shinzo Abe announced the Summer Olympic Games in Tokyo would be postponed until next year. They agreed to keep the name as Tokyo 2020 and said the Olympic flame would stay in Japan.

The Olympics have never been rescheduled in peacetime. In 1916, 1940 and 1944, the Games were canceled because of world wars.

As Japan now prepares for the logistical nightmare that is rescheduling one of the world's biggest and most popular events, Tokyo 2020 organizing committee chief executive Toshiro Muto said Tuesday that it was unclear who would cover the additional costs arising from pushing back the Games.

Alaska has recorded its first death due to Covid-19, according to the state’s chief medical officer.

This case brings the nationwide coronavirus death toll in the United States to 705.

Dr. Anne Zink announced in a Tuesday evening news conference that the patient had been living in Washington “for a while” and died there. Due to CDC standards on how coronavirus deaths are classified and to avoid miscounting, it is still counted as an Alaska death, according to Zink.

The state Department of Health and Social Services reports there are currently 42 confirmed Covid-19 cases in Alaska.