Ohio Gov. Mike DeWine thinks it’s possible schools may be closed for the rest of the academic year, according to an interview he gave this morning on "State of the Union."

"Absolutely. Look, the projections — and again, this is all projections, I'm just going by what medical experts are telling us. You know, this may not peak until the latter part of April or May. So we've informed the superintendents, while we've closed schools for three weeks, that the odds are this is going to go on a lot longer and it would not surprise me at all if schools did not open again this year," DeWine said.

The top infectious disease expert in the US did not rule out support a temporary national lockdown in an effort to curb the spread of coronavirus.

Dr. Anthony Fauci, the director of the National Institute of Allergy and Infectious Diseases, would like to see a "dramatic diminution of personal interaction," including interactions in bars and restaurants, according to an interview he did this morning on CNN's “State of the Union."

“I would like to see a dramatic diminution of the personal interaction that we see in restaurants and in bars. Whatever it takes to do that, that's what I'd like to see,” Fauci said.

A woman at an Australian supermarket allegedly pulls a knife on a man in a confrontation over toilet paper. A Singaporean student of Chinese ethnicity is beaten up on the streets of London and left with a fractured face. Protesters on the Indian Ocean island of Reunion welcome cruise passengers by hurling abuse and rocks at them.

The coronavirus risks bringing out the worst in humanity.

Never mind that Australia's toilet paper supply is plentiful, that the Singaporean has no links to the virus and that not a single passenger on the Princess cruise ship that docked in Reunion was infected.

Irrational and selfish incidents like these are likely the exception, not the rule, but an everyone-for-themselves mentality -- or each family, even each country -- appears to be growing, putting into question the world's ability to unite and slow the coronavirus' spread. 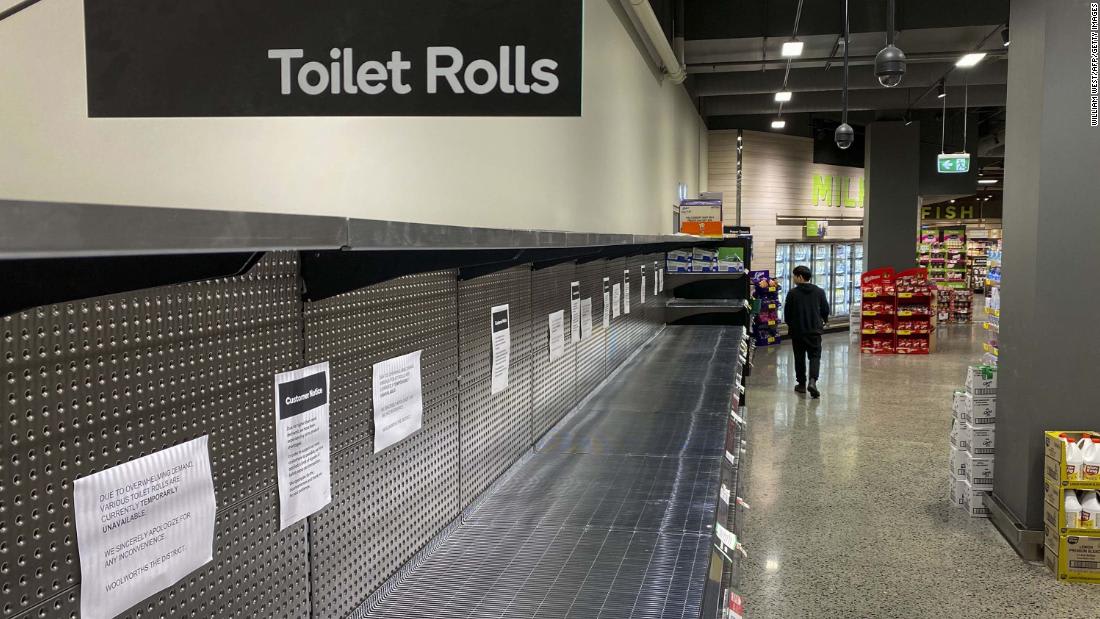 This pandemic risks bringing out the worst in humanity. Here's why we can be selfish and irrational

Italy has reported 3,497 new novel coronavirus cases and 175 deaths on Saturday, the highest number of new cases reported in a single day since the outbreak began.

Italy has now confirmed 21,157 cases, second highest in the world after China.

The Italian Ministry of Health said Saturday evening that 1,966 people have recovered from the virus and 1,441 have died. The ministry said 1,518 are being treated in intensive care units.

Correction: This post has been updated to include the correct number of new cases and deaths on Saturday, as reported by the Italian Ministry of Health.

The UK Foreign Office said Sunday that it was advising against “all but essential travel to the USA” in light of the travel restrictions placed by the US government on visitors from the UK.

“The FCO advise against all but essential travel to the USA, due to restrictions put in place by the US government with effect from 03:59 GMT 17 March in response to the outbreak of coronavirus,” the Foreign and Commonwealth Office said on its website.

The UK was initially excluded from travel restrictions introduced by the US, but Vice President Mike Pence announced Saturday that all travel from the United Kingdom and Ireland will also be suspended effective midnight on Monday.

Kurz announced major restrictions on movement in public spaces, urging Austrians to self-isolate. He also banned gatherings completely and put further limits on who can enter the country.

The measures will be based on a special law to be passed by the Austrian Parliament on Sunday, a government spokesperson told CNN.

"We have already announced that Austria must shut down to an emergency operation. We will also have to take further measures. Public gatherings will be completely prohibited for the time being," Kurz said on Twitter.

The freedom of movement will be "massively restricted." Sports grounds, playgrounds and other public meeting places will be closed completely.

Starting Tuesday, restaurants in Austria will be closed.

Entry requirements to Austria will be tightened further. Travellers from the UK, the Netherlands, Russia and Ukraine will no longer be allowed to enter Austria directly.

Flight connections to these countries will be discontinued.

In order to secure supplies in the long term, the retirement of military personnel is halted and a special task force will support the police.

Austria's Ministry of Health said Sunday there were a total of 800 confirmed coronavirus cases in the country. So far one death has been reported.

In a series of tweets, O'Hare International Airport thanked passengers for their patience during the "longer than usual" customs processing occuring at the airport Saturday.

Passengers arriving from overseas reported having to wait hours in long lines at the Chicago area airport.

The airport attributed the longer wait times to the "enhanced #COVID19 screening for passengers arriving from Europe."

During the delay, airport personnel and the Chicago police department were on hand to distribute water and snacks to travelers who were waiting to be processed, said the airport's tweet.

More European airlines have announced cancellations of flights to and from Spain, where the government announced strict restrictions on public life on Saturday.

There are at least 2,885 cases of the novel coronavirus in the United States, according to the state and local health agencies, governments and the U.S. Centers for Disease Control and Prevention.

According to the CDC there are 70 cases from repatriated citizens.

According to CNN Health’s tally of US cases that are detected and tested in the United States through US public health systems, there are 2,815 cases in 49 states, the District of Columbia and U.S. territories, bringing the total number of coronavirus cases to 2,885  in total, while 60 people have died.

West Virginia remains the only state yet to report a case of coronavirus.