Iran has recorded 3,111 new coronavirus cases in the past 24 hours, bringing the total number of cases in the country to 44,606, Health Ministry spokesman Kianush Jahanpoor told Iranian state television on Tuesday.

Jahanpoor said there had been 141 additional coronavirus-related deaths, bringing Iran's death toll to 2,898.

He added that 14,656 patients have so far been released from hospitals across the country, while another 3,703 hospitalized patients remained in critical condition.

At least 575 coronavirus deaths were reported in the United States on Monday, according to a count by CNN Health.

This is the most reported deaths in the US in a single day since the coronavirus outbreak began.

There have been a total of 3,004 virus-related deaths reported in the US during the outbreak.

On Monday, President Donald Trump said the country was facing a "vital 30 days" ahead, during which the results of his efforts to contain the virus would become known.

"Our future is in our own hands, and the choices and sacrifices we make will determine the fate of this virus and really the fate of our victory," said Trump.

The more Americans dedicate themselves now to social distancing, the quicker the country can return to normal, he said.

US social distancing guidelines were extended by another 30 days, to April 30, on Sunday.

A cricket stadium and a sports complex in northern India have been converted into "temporary jails" to hold those who violate the country's lockdown conditions, according to a senior police official.

The facilities are located at the Sector 16 Cricket Stadium and the Manimajra sports complex in the city of Chandigarh. They have been operational since March 24, and authorities say a total of 600 people have been detained so far.

"We round up people we find loitering on the street who are violating the lockdown conditions and bring them to the jail to brief them about social distancing, we provide them with food and tell them about proper sanitization, and they are let go by evening," said Chandrajit Singh, Chandigarh Police's public relations officer.

The police force has also been briefed to maintain social distancing measures while detaining those who violate the lockdown, Singh added.

"We don't file official charges against these violators, but if there are repeat offenders then action might be taken against them," Singh said. The jails will be operational as long as lockdown conditions are in place, he added.

In the state of Haryana, efforts have also been taken to keep migrants in temporary shelters.

More than 450 shelters have been set up across 22 districts in the state. Most of these shelters are housed in government buildings, and others have been set up in private properties offered by social organizations, according to Navdeep Virk, a senior police official in Haryana.

“These shelters have been set up for [the] migrant population as well as any other needy shelter-less person,” added Virk.

Haryana police say they have persuaded migrants attempting to leave the state to move into these shelter homes, and that they are facilitating the distribution of food, medicines and other essential items to almost 500,000 workers.

The coronavirus continues to place huge strain on society as we know it, as its effects ripple around the world. Here are some of the latest developments:

More flight cancellations: British Airways has suspended flights to and from London Gatwick airport, the second-largest in the UK.

Airlines have struggled during the coronavirus outbreak, cutting flights in response to travel restrictions and a sharp fall in demand.

On Monday, European budget airline easyJet announced it was grounding its entire fleet given the “unprecedented travel restrictions” caused by the pandemic.

Virus strikes younger demographics: Australia and New Zealand say a high proportion of those diagnosed with coronavirus in those nations are young people.

In New Zealand, 26% of confirmed cases are in people aged 20 to 29, and 21% of cases in Australia involve those in the same age range.

One possible explanation for the finding is overseas travel, which younger people engage in more than older demographics. In both New Zealand and Australia, the vast majority of cases recorded have been linked to overseas travel or other known cases, meaning there is limited transmission in the wider community.

Coronavirus could drive millions into poverty: Countries in East Asia and the Pacific will be dealing with a recession if they do not act immediately to combat the economic shocks caused by the novel coronavirus pandemic, the World Bank is warning.

It also estimates that the pandemic’s economic effects could drive millions of people in the region into poverty.

Much of the world is now encountering economic difficulties, but the crisis is particularly acute in Asia-Pacific because the region had already spent months dealing with the negative economic effects of the US-China trade war.

Indonesia is to ban most foreign nationals from entering and transiting through the country, as it steps up measures to limit the spread of novel coronavirus.

Speaking at a press conference, Foreign Affairs Minister Retno Marsudi said the restrictions would not apply to work permit holders, diplomats, and other official visitors, state-run Antara News Agency reported. He did not specify when the restrictions will be implemented.

"The inflow of migrant workers from various countries, especially from Malaysia, must be handled carefully, as it involves hundreds of thousands or millions of Indonesian migrant workers keen to return home," he said.

Indonesia currently has at least 1,414 confirmed cases of coronavirus, according to data collated by Johns Hopkins University.

Italian cities and towns throughout the country will lower their flags and hold a minute's silence on Tuesday to commemorate the victims of coronavirus, according to the Italian mayors' association.

The Vatican said it would also join the tribute.

"Today, in solidarity with Italy, the Holy See will raise their flags at half mast, mourning, to express their closeness to the victims of the pandemic in Italy and in the world, to their own families and those generously struggling to end it," the Vatican said in a statement.

According to a count by Johns Hopkins University, 11,591 people in Italy have died from coronavirus -- the highest death toll of any country.

In a news conference Tuesday, the spokeswoman for the island's Ministry of Foreign Affairs, Joanna Ou, called on the WHO to make the change.

Self-governing, democratic Taiwan is not a member of the WHO, and only around a dozen nations recognize it as an independent state. China's leadership refuses to maintain diplomatic ties with any country that recognizes Taiwan, which it sees as part of China.

Taiwan has been praised for its handling of the coronavirus outbreak, and only has 306 confirmed cases, according to a count by Johns Hopkins University.

Despite that, the WHO has not shared the information provided by Taiwan with the international community, according to Ou.

Countries were therefore unable to understand Taiwan's epidemic situation, its preventive policies and its border quarantine measures, she said.

"So what the WHO said in its statement that it is learning from all regions, including Taiwan, to share 'best practices' with the world, differs from the facts, because they haven't at all shared with other countries the information provided by Taiwan," Ou said at the press conference.
"This shows that the WHO still have political considerations when dealing with participation in technical expert meetings.

Ou also noted that the WHO includes Taiwan under China in its epidemic report, adding: "we have already expressed our severe protest regarding this."

Recent questions: Ou's words follow a recent interview, in which a WHO representative appeared to evade questions about Taiwan while speaking to a reporter from Hong Kong public broadcaster RTHK.

In response, the WHO put out a statement, saying:

"The question of Taiwanese membership in WHO is up to WHO Member States, not WHO staff. However, WHO is working closely with all health authorities who are facing the current coronavirus pandemic, including Taiwanese health experts."

Yuanfudao, an online education startup based in Beijing, has won a billion dollars in fresh funding from prominent investors including Tencent (TCEHY) and Hillhouse Capital.

The eight-year-old company, which runs an online platform for live tutoring and homework help, is now valued at $7.8 billion.

The investment is notable because startups in China have found it notoriously difficult to raise funds in recent months.

Over the past year, deal activity has slowed so much that it's come to be known as the "capital winter." Disruption from the coronavirus pandemic is prolonging the problem.

The online education industry, however, is widely expected to benefit as schools around the world remain closed and millions of children stay home.

"Previously, investors looked at (educational technology) as a niche industry," Adam Nordin, who covers the sector for investment banking at Goldman Sachs, said in a recent research briefing.

Not so much anymore, he added.

"We’re also seeing more interest from long-term investors, such as pensions and sovereign wealth funds, as well as family offices, all of whom appreciate the long-term secular drivers for the space." 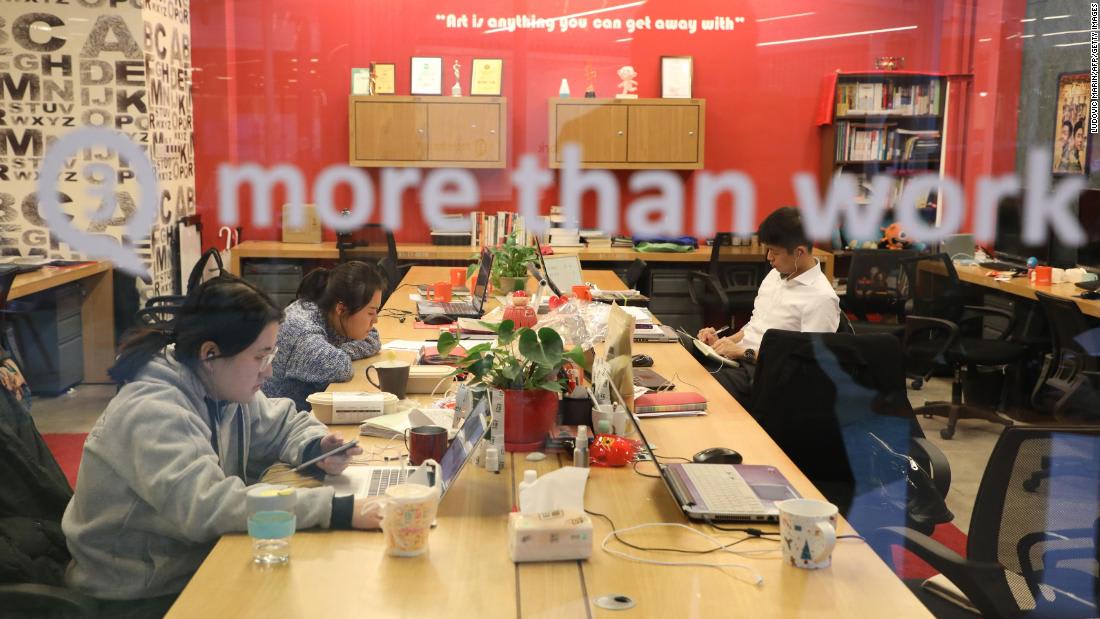 Chinese startups were already struggling to raise money. The coronavirus may be the last straw

The German city of Jena is to make wearing a mask mandatory in some places, amid fears about the spread of coronavirus.

In a statement posted on its website Monday, Jena's city hall said that in a week's time it would be mandatory to wear mouth-and-nose protection in shops, on public transport and in public buildings there.

The measure was requested by the health service, according to the statement. In addition to masks, scarves are also considered protection.

The mask rule does not apply across Germany as a whole.

Jena, in the Eastern state of Thuringia, says it has 119 coronavirus cases in its population of approximately 108,000 people.

Germany has at least 66,885 cases of coronavirus, according to data collated by Johns Hopkins University.