President Donald Trump finally leveled with America about the desperate reality of the coronavirus pandemic, warning of cruel weeks to come in one of the most chilling White House moments in modern history.

Even with blanket nationwide adoption of stringent mitigation efforts, between 100,000 and 240,000 Americans could face death in the coming weeks in a cascading nationwide ordeal, according to modeling explained by senior members of the President's emergency task force Tuesday.

It is in the nature of the presidency, that the commander-in-chief sometimes has to deliver grave news to the nation.

George W. Bush had to narrate the horror of the 9/11 attacks in 2001. Ronald Reagan movingly eulogized shuttle astronauts after a 1986 disaster. And John Kennedy kept his nerve to address the nation during a showdown with the Soviet Union over Cuba that threatened to erupt in nuclear war.

But no president for many decades has had to level with his country over such a sudden impending loss of American life in a medical emergency as Trump is now being forced to do -- after apparently coming to terms about the extent of the crisis himself. 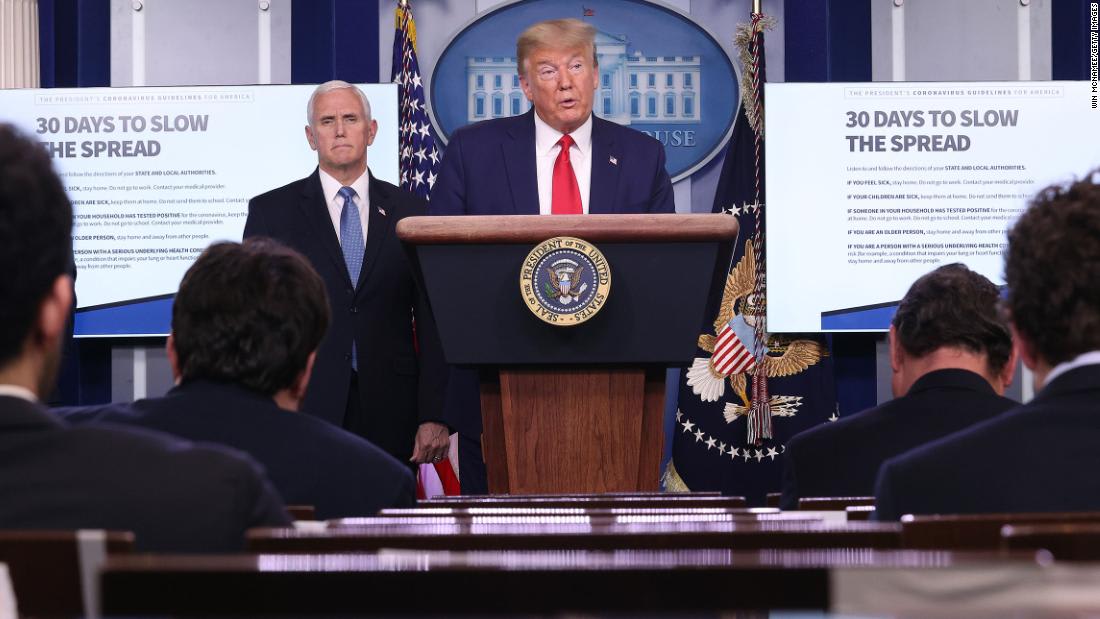 At least 11 million people could be pushed into poverty by the coronavirus pandemic, warned a new World Bank report released Monday.

In the worst-case scenario outlined by the Washington-based financial institution, the region could suffer its sharpest downturn in more than two decades, plunging much of Asia into a prolonged recession.

The bank's baseline forecast projects that regional growth could slow to 2.1% in 2020, compared to estimated growth of 5.8% in 2019. However, under its worst-case projection, the region's economy could contract by 0.5%, creating the potential for an extended crisis.

In China, the epicenter of the coronavirus outbreak, the bank projected a decline in growth to 2.3% in the baseline forecast for 2020. In the worst case, China's growth would almost disappear entirely at 0.1%, down from 6.1% in 2019.

Such a reduction would have profound consequences for the global economy. China is the world's second largest economy and a primary engine of global growth, meaning that any disruption to its economy will be felt worldwide. 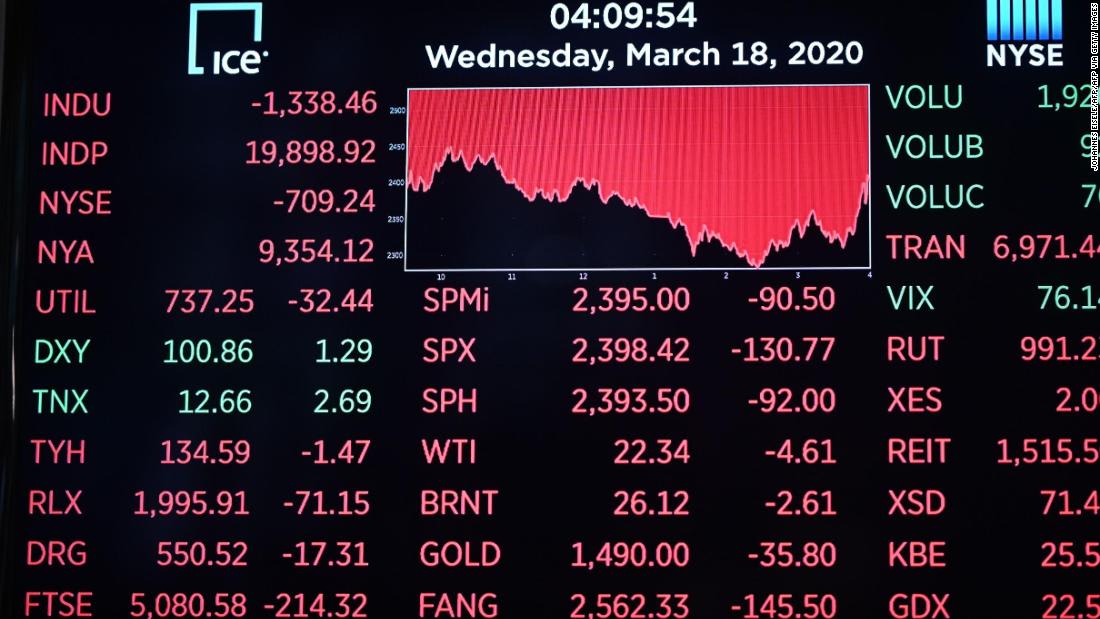 The situation for passengers onboard the Zaandam cruise ship is becoming increasingly dire, after eight people on the vessel were confirmed to be infected with the novel coronavirus.

The cruise ship also has 193 people who are experiencing influenza-like symptoms, the president of Holland America cruise line Orlando Ashford said in an op-ed in the Sun Sentinel newspaper. Four guests have died onboard, although the cause of their deaths is still unknown.

Jennifer Allan, the daughter of Gloria and Bill Weed, two passengers aboard the Zaandam, told CNN both of her parents started to get a fever about nine to 10 days ago. Gloria and Bill are both in their seventies.

“Since the first person got sick, everyone has been quarantined in their cabins, and they are not allowed to leave. They have an inside cabin. They have only been able to leave it once about five days ago for 30 minutes, but other than that it's basically been solitary confinement,” Allan said.
“People leave food outside their door so that nobody interacts with each other.”

Her father Bill's condition has worsened, Allan said. “My dad has developed pneumonia. He's getting worse. They need to get to land, they need to get medical attention sooner rather than later.”

Gloria tells her daughter that the nights have been difficult for Bill. “The nights have really, really been rough the past few nights, so he's not functioning very well in the morning, towards the afternoon he starts to get a little bit better,” Allan says. “Generally speaking, but it's really rough at night ... It's getting really scary for them right now."

Cuban officials announced Tuesday the country will suspend all international commercial flights to help combat the spread of coronavirus across the island. Foreign ships will also be required to leave the country.

Cuba has recorded 186 cases of the novel coronavirus, with six deaths, according to Johns Hopkins University.

The additional measures come one week after Cuba implemented a 30-day lockdown, restricting tourists and setting up strict quarantine measures for citizens returning to the country.

Cuba will also suspend this year’s May Day parade, Cuban President Miguel Diaz-Canel said on national TV on Tuesday, to avoid further spread of the virus.

How significant is the suspension? The annual parade has never been suspended on the communist-run island since Fidel Castro declared his socialist revolution in 1961, Cuban officials told CNN.

The May Day parade features hundreds of thousands of government supporters marching in front of the island’s top leadership in Havana’s revolution square.

More than 42,000 people worldwide have died from Covid-19, the disease caused by the novel coronavirus.

Here are the five countries with the highest death tolls from the outbreak:

Japan remains on the brink of an emergency as the numbers of coronavirus infections continues to increase in the country, a top government official said on Wednesday.

Chief cabinet secretary Yoshihide Suga said the virus must be controlled and that the government would do “whatever is necessary” to reduce the impact on the economy.

He said, however, that the current situation doesn't call for the declaration of a state of emergency.

The latest rise in people testing positive in Tokyo came as Japan recorded over 200 new coronavirus cases on the same day -- the biggest single-day jump so far, according to public broadcaster NHK.

Declaration of emergency: On Tuesday, Koike urged Japan’s Prime Minister Shinzo Abe to use Tokyo as a reference to decide whether to declare a state of emergency to deal with the coronavirus pandemic, NHK reported.

“Tokyo is on the verge of an explosive increase of infections. We are trying to prevent that situation and trying to prevent further spread (of the virus). A decision by the state is needed now,” Koike told reporters Tuesday.

As Covid-19 brings the world to a halt, some world leaders have spotted an opportunity to tighten their grip on power.

In Hungary, a bill passed on Monday which handed Prime Minister Viktor Orban the power to rule by decree -- indefinitely.

It gives him the authority to punish journalists if the government believes the reporting its not accurate and allows the government to hit citizens with heavy penalties for violating lockdown rules. It also prevents any elections or referendums from taking place while the measures are in effect.

The move led to calls for the European Union to act, with Italy's former Prime Minister, Matteo Renzi, going so far as to suggest the bloc kick Hungary out if the measures were not revoked -- something that's far easier said than done.

Orban's move is perhaps the most flagrant power grab to take place during this pandemic. However, other strongman leaders have spotted the opportunity to seize greater authority. 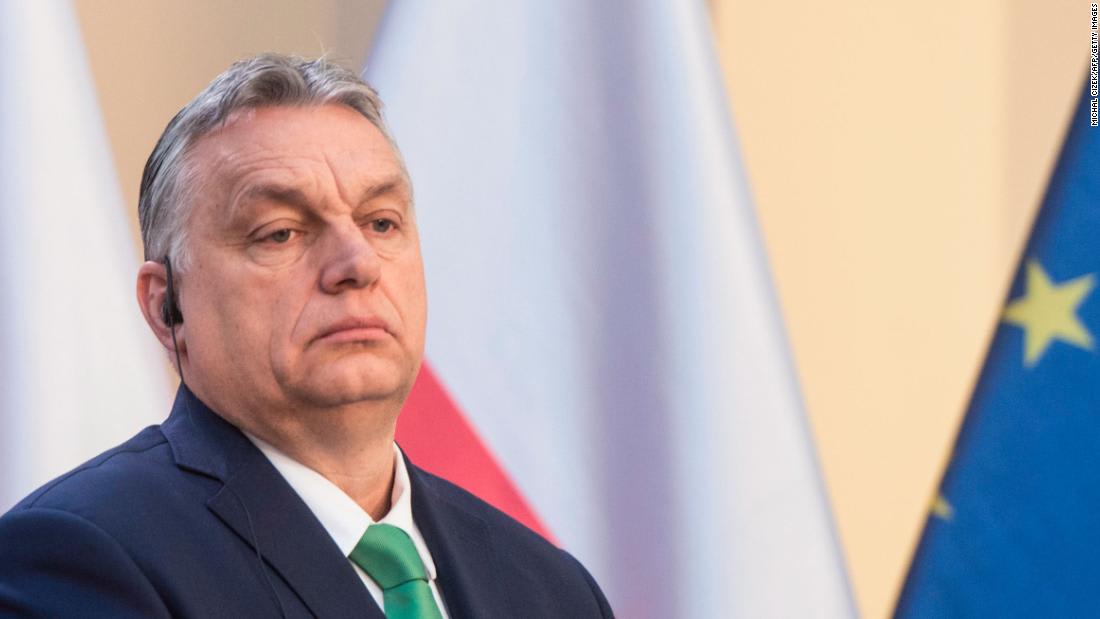 Power-hungry leaders are itching to exploit the coronavirus crisis

Tsai also announced Taiwan will be donating 10 million face masks to countries most in need.

The latest stimulus plan will act as a follow-up to the first round of economic measures introduced in early March to combat a potential coronavirus downturn.

As of Wednesday, the democratic, self-ruled island has reported 322 cases of Covid-19, which has killed five people.

The US state of Wyoming is now the only state in the country that hasn't reported any coronavirus-related deaths, after Hawaii reported its first fatality late Tuesday.

Wyoming, in the West of the country, is the least populated state in the US and known for its natural beauty, with famous national parks such as Yellowstone.

While the state has not reported any deaths, cases have risen in recent days to 120. The White House coronavirus response coordinator, Dr. Deborah Birx, urged rural communities on Monday to prepare for the spread of Covid-19, "even though you think it's not there.”

These US states have reported the most fatalities:

Note: The figures are according to CNN Health's tally of US cases that are detected and tested in the United States through US public health systems.

For the most up-to-date US numbers compiled by CNN, please check this map which automatically refreshes every 10 minutes: