The Chinese government has facilitated a donation of 1,000 ventilators that are expected to arrive at JFK Airport today, Cuomo said moments ago during a press conference.

"By the numbers we're not yet at the apex. We're getting closer," Cuomo said.

New York City's Javits Convention Center will have 2,500 beds and will be staffed entirely by the federal government, Cuomo said.

Sheryl Pardo was preoccupied with one fact as she boarded her flight; this would be the last time she saw her mother.

A surprise awaited her as she learned she was the only passenger on the plane because of the coronavirus pandemic. She met Jessica and Dion, two flight attendants who turned her trip into something to remember in a good way.

The American Airlines flight attendants bumped her up to first class and addressed her personally over the loudspeaker. Pardo spent the flight telling them about her mom and the loving, get-things-done person she was.

"I think in moments like this the pain of losing your mom is exacerbated by being in this frightening time," Pardo told CNN. "Other people's kindness is what's going to get us to through this."

"I want them to know how much it meant to me," the 59-year-old said. "It was super positive, which I didn't expect from that trip."

London Mayor Sadiq Khan has warned that the capital's public spaces will only remain open if the government's stay-at home order is adhered to.

"Our public spaces will only stay open if Londoners follow the rules," Khan tweeted Saturday. "If you were planning to meet people outside this weekend, don’t. If someone asks you to meet, say no."

Some context: The mayor's warning follows an earlier call by the British government for members of the public to stay at home over the weekend, amid concerns that the sunny weather could see an uptick in the number of people gathering outside.

“If you go out this weekend, you might catch more than the sun," Downing Street said in a tweet Saturday.

The UK National Police Chiefs Council (NPCC) has also confirmed that patrols will be taking place over the weekend to encourage people to follow the rules.

“Please continue to stay at home and only travel for essentials. We know the weather is going to be nice, but the sooner we can beat Covid-19, the sooner we can all go back to enjoying the great outdoors,” the NPCC said. 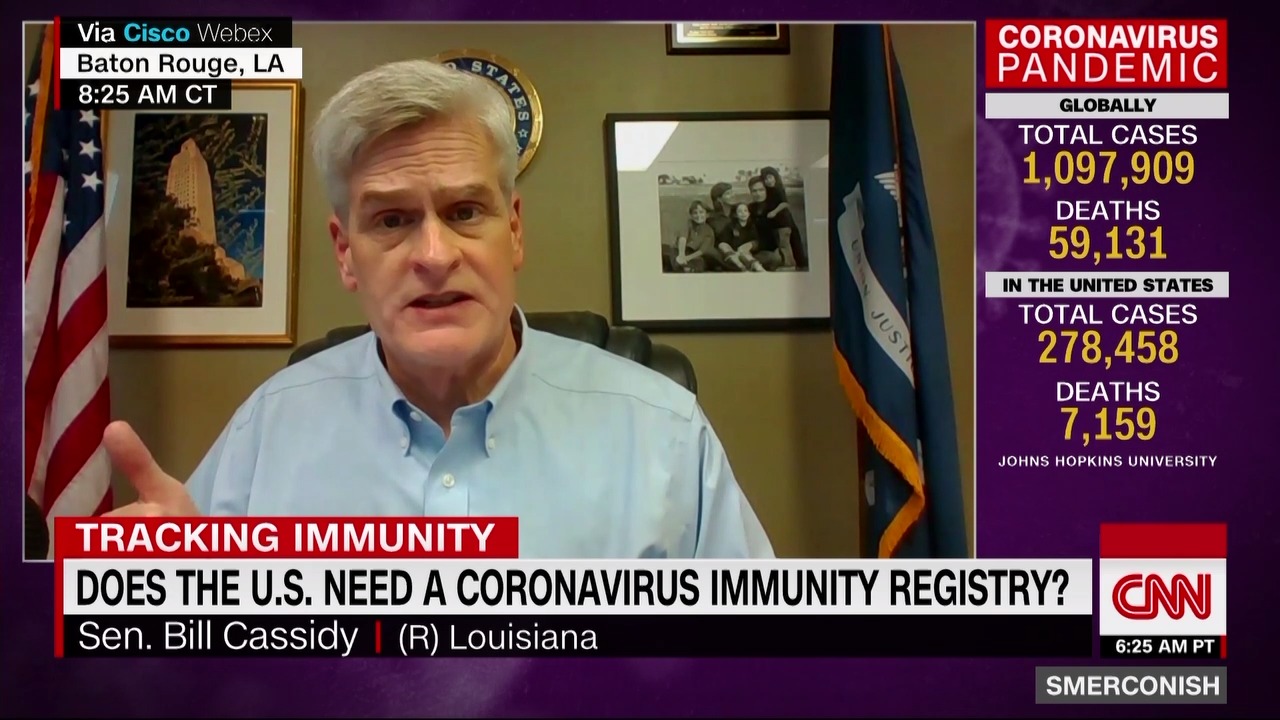 Sen. Bill Cassidy, a Republican from Louisiana, wants to create a registry to track who has recovered from the coronavirus.

"We strongly suspect that once somebody has been infected they're now immune," Cassidy said.

He said a registry would be set up similar to the one that is used to document vaccinations. Once a patient has recovered, their name would be added to the registry.

They could then return to work and help treat people with coronavirus without worrying about getting sick. He said this information would also help protect the rest of the population who do not have the virus.

Cassidy said there is some uncertainty around whether the presence of antibodies actually means a person won't get the virus again.

So far, 9,920 people have recovered from coronavirus in the US, according to Johns Hopkins University.

Spanish Prime Minister Pedro Sanchez has announced that the country’s state of alarm, which demands strict limits on people’s movements and continues the closure of schools and most businesses, will continue for a further two weeks, until April 26.

"We are facing the great crisis of our lives," Sanchez said in a nationwide address.

The state of alarm had already been extended until April 11. The government will ask the Spanish parliament to approve the extension on Tuesday.

Sanchez added: "Weeks of strict restrictions await us. We ask families to stay at home. To young people, to continue to study, to maintain momentum. To the elderly, to protect yourselves.”

He said that he understood how difficult it is for the nation to continue isolating at home for a further two weeks.

“These days test our serenity. They are frenetic days. They make us anxious for our friends and family. They are the most difficult days of our life,” Sanchez added.

Sanchez also said that the government was preparing a plan for the eventual resumption of economic and social activity, once the curve of the coronavirus pandemic flattened.

"Once the curve clearly descends, a new scenario will open, a second stage, the progressive return to a new social normality and to a reconstruction of our economy and the social impact it is having in the form of job losses," Sanchez said. “In reconstruction we will have to protect the most vulnerable. In this emergency, no one will be left behind. Our strength will come from the union between business, administration and the different regions." 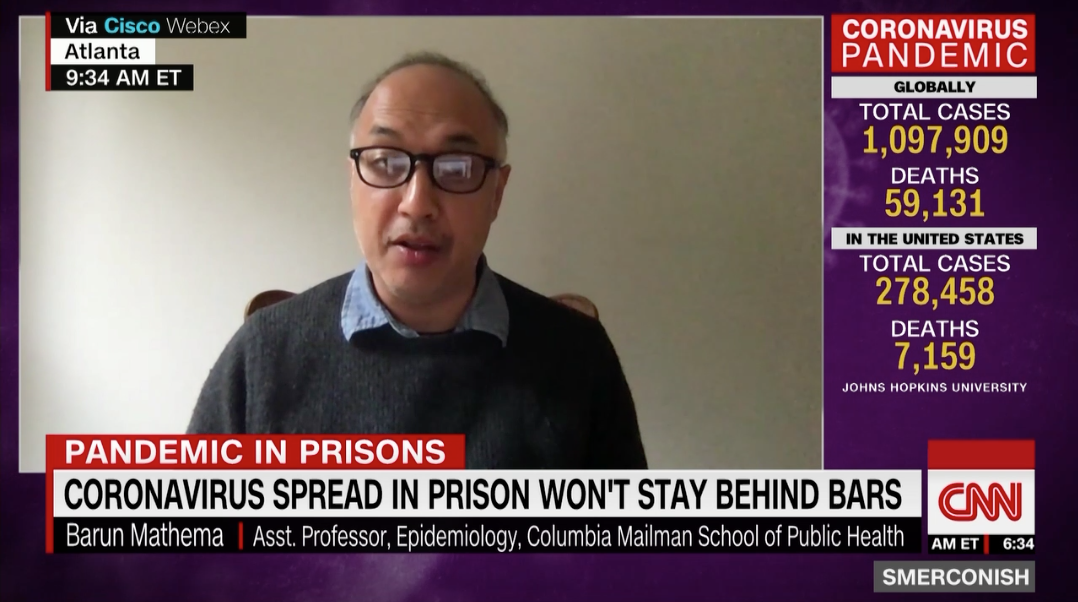 A US health expert is concerned that prisons and jails could cause the coronavirus to spread faster in those facilities and outside.

Dr. Barun Mathema, an assistant professor of epidemiology at Columbia University's Mailman School of Public Health, said that because of the high, concentrated number of people in these facilities, community spread is likely.

"The prison population in and of itself has a fairly sizable, vulnerable population within that, have a lot of chronic conditions, other types of infections," Mathema said. "We should also ensure that what happens in a prison, or a jail for that matter, does not pose an undue risk to the community. In this case, we know we have ample examples from many infectious diseases."

Once a virus or disease spreads within a prison, family members or staff can then bring it outside into the community.

Mathema said another reason why this could be a dangerous scenario is because of the frequency inmates are coming in and out of jails.

"It's particularly troublesome if we should see outbreaks, sort of occurring within jails, where sort of the incarcerated populations may be moving in and out," he said.

According to a 2018 report from the Bureau of Justice Statistics (BJS), nearly 2.2 million adults were held in America's prisons and jails at the end of 2016.

The United Kingdom has recorded 708 new deaths from coronavirus, the largest one-day rise since the outbreak began.

According to figures released by the Department of Health and Social Care, a total of 4,313 have now died in the UK. The figures are current to 5 p.m. (12 p.m. ET) on April 3, but were released a day later.

Letha Love, an Atlanta ICU nurse, said she was shocked by what she saw when she arrived.

"I wasn't expecting it to be the amount of people that it was and the severity of it," she told CNN this morning. "To hear the whole hospital calling codes all night, it's emotionally draining."

Love said she was originally planning to stay 3 to 6 weeks, but might return to Atlanta earlier.

"I do whatever it takes to protect myself so that I can go back to my kids healthy and strong. But this is a lot. It's a lot. And people need to take it serious," she said.

Love said most of the patients she has worked with in New York so far have been intubated, but she wants their family members to know that nurses and other health professionals are taking care of them.

New York currently has 103,169 coronavirus cases and 2,935 deaths, according to Johns Hopkins University.