New York has a total of 122,031 cases of Covid-19 across the state, Gov. Andrew Cuomo said at a press conference Sunday.

There were 575 new hospitalizations across the state, the governor said.

Of those hospitalized for Covid-19, 74% have been discharged, Cuomo said. 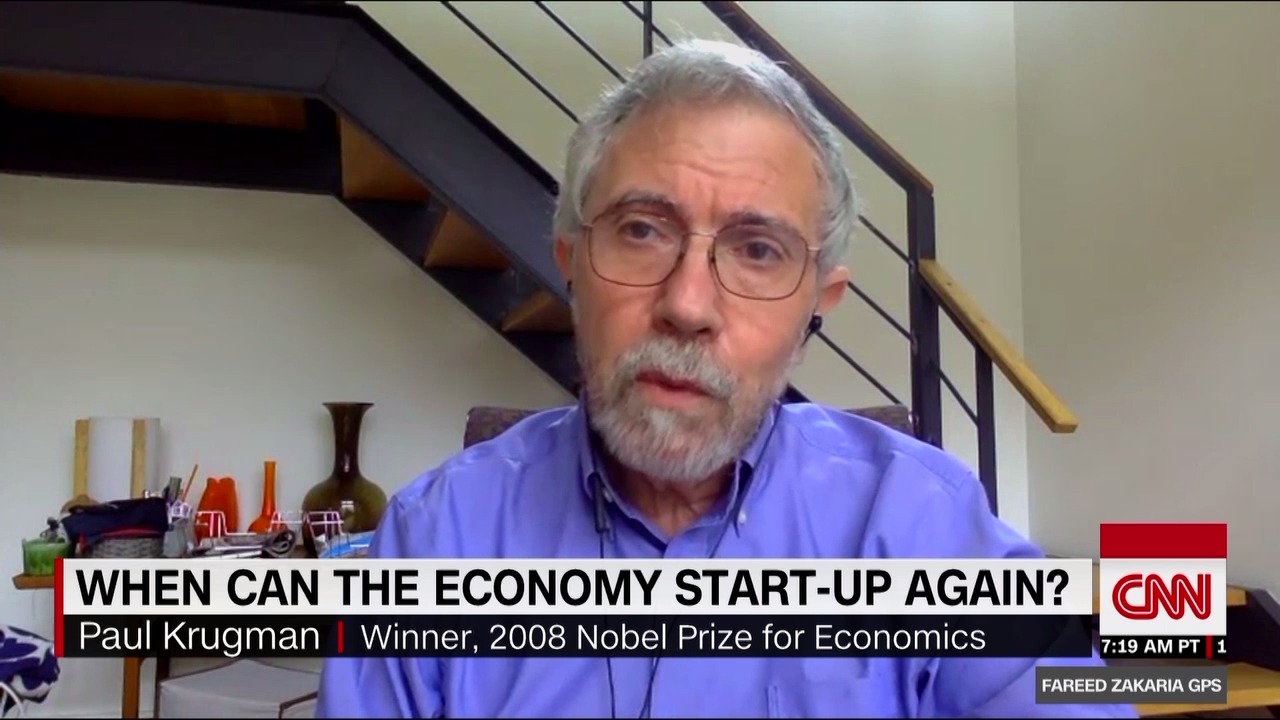 A renown economist is warning about the consequences of opening the economy back up too quickly after the coronavirus.

Paul Krugman, a New York Times columnist and winner of Nobel Prize for Economics in 2008, told CNN that it is better for businesses to stay shut down longer rather than starting prematurely and pointed to the flu pandemic in 1918.

"The cities that did more social distancing and stayed with it not only had much lower death rates, they did better economically," Krugman said. "So everything now says this is not the time to worry about GDP. Don't worry about dollars."

Krugman said opening the economy too fast would cause more deaths and a bigger economic slump.

The US surgeon general said this week is going to be the "hardest and the saddest" for "most Americans' lives," describing the upcoming grim period of the coronavirus pandemic in the United States as a "Pearl Harbor moment" and a "9/11 moment."

"I want Americans to understand that as hard as this week is going to be, there is a light at the end of the tunnel," Vice Admiral Jerome Adams said on "Fox News Sunday."

Officials are warning the next two weeks will be crucial in the fight to stop the spread of the virus. Early Sunday, the nationwide death toll had surpassed 8,500 people, with more than 312,000 infected, according to data compiled by Johns Hopkins University.

Some context: While speaking at Saturday's coronavirus task force briefing at the White House, President Trump said that this week and next will probably be the toughest in the fight against coronavirus and that "there will be a lot of death."

"This will be probably the toughest week between this week and next week, and there will be a lot of death, unfortunately, but a lot less death than if this wasn't done but there will be death," Trump said.

Defense Secretary Mark Esper said he supports the decision to relieve Navy Capt. Brett Crozier after he wrote a letter to Navy leadership warning about a coronavirus outbreak onboard.

Esper said there is an ongoing investigation and that acting Secretary of the Navy Thomas Modly lost faith in Crozier.

"I think acting Secretary Modly made a very tough decision, a decision that I support. It was based on his view that he had lost faith and confidence in the captain based on his actions. It was supported by Navy leadership," Esper told CNN.

Esper said more than half of the USS Theodore Roosevelt has been tested, and only 155 sailors have test positive for coronavirus. He said the crew is being treated even though it is not possible to evacuate the entire ship at one time.

"You actually cannot do that because there's nuclear reactors to be run, you have very sensitive equipment, you have weapons on board that ship," he said. "So it's how you manage the crew, make sure you're protecting them, segregating, treating those that need treated while at the same time maintaining the readiness of the ship in case it's called upon to get to sea quickly."

Esper said that Crozier story was not true. He said once the Navy was aware of the first case of coronavirus, military leadership was involved to make sure there was access to supplies and testing kits.

"They were all in in terms of providing support to this crew, this ship, as it arrived in port. So I disagree with that assumption. I have a lot of faith and confidence in the Navy leadership," Esper said.

Esper said a new commander will be on the USS Theodore Roosevelt soon.

Some background: Crozier was relieved April 2.

Modly told reporters the reason Crozier was being removed was for showing "extremely poor judgment" and creating a "firestorm" by too widely disseminating the memo detailing his concerns, copying some 20 to 30 people.

The United Kingdom's coronavirus death toll has risen by 621 according to new figures released by the Department of Health and Social Care.

This is less than Saturday’s reported increase of 708.

By the numbers: In total, there have now been 4,934 recorded deaths from coronavirus in the UK.

The number of confirmed cases of coronavirus is now at 47,806 – which is an increase of 5,903 on Saturday’s figures.

Defense Secretary Mark Esper said “many” ventilators to be used in the coronavirus response have "deployed with the USNS Comfort and Mercy in New York and Los Angeles, respectively."

"They are with our field hospitals," Esper said this morning on CNN. "We have several field hospitals deployed in New York, Seattle, New Orleans, and Dallas. And then we provided several hundred more that are prepositioned and ready to go, particularly with regard to New York City, when they're needed. As you may know, HHS has several thousand ventilators in stock right now and they plan on delivering those first.”

Esper said “we're probably sitting on a few hundred,” ventilators that have still not shipped as they wait for requests to send the remaining ventilators once other federal stocks are depleted.

Some context: Despite having committed to transferring 2,000 ventilators in military stocks to the Federal Emergency Management Agency and the Department of Health and Human Services to fight the coronavirus outbreak, the Pentagon had not shipped any of them as of this past Tuesday because the agencies have not asked for them or provided a shipping location, the Pentagon's top logistics official said during a briefing last week.

The Netherlands has recorded a significant drop in the number of new coronavirus deaths, according to new figures from the Dutch National Institute for Public Health and the Environment.

The Institute says 115 new deaths were recorded in the past 24 hours. That compares to 164 for the previous day.

Among the deceased patients recorded in the past day are three people between the ages of 25 and 50. “They all had serious underlying health conditions,” the Institute said.

By the numbers: The total number of reported deaths from coronavirus is now at 1,766.

Overall, there are 17,851 confirmed cases of coronavirus in the country.

Calderwood was photographed by a Scottish newspaper near her family’s second home – which is in a different part of Scotland.

She has issued a statement to “apologize unreservedly” for her actions.

“While there are reasons for what I did, they do not justify it and they were not legitimate reasons to be out of my home,” Calderwood said. “While I and my family followed the guidance on social distancing at all times, I understand that I did not follow the advice I am giving to others, and I am truly sorry for that.”

Livingstone says everyone needs to follow the social distancing rules, adding that “individuals must not make personal exemptions bespoke to their own circumstances”.

“The legal instructions on not leaving your home without a reasonable excuse apply to everyone,” he said.

Some context: Scotland’s government has imposed rules, preventing people from leaving their homes during the coronavirus crisis unless it is for essential food, health or work reasons.

A priest in the Lombardy region of Italy has been celebrating mass in an empty church, except for photographs of parishioners he has taped to the pews.

Don Giuseppe Corbari told CNN that the idea of having pictures of his faithful came to him because “we've started holding masses without the faithful since February 24.”

He said he found delivering mass to empty pews was difficult at the beginning.

“I felt isolated, it didn't seem real to me,” Corbari said.

Corbari said when he thought to ask parish members to send him their pictures, he didn’t expect the response he got.

“I didn't expect such a collaborative reaction. I was inundated by pictures, and I printed them. ...now I see that other parishes, even around the world, are doing similar things," he said.

So far, the church, Santi Quirico e Giulitta a Robbiano di Giussano, has been broadcasting mass over the radio but it plans to start live streaming soon.