Police in Pakistan have arrested dozens of doctors and medical staff protesting a lack of personal protective equipment (PPE) in their fight against the Covid-19 pandemic.

The demonstrations took place in the city of Quetta in Pakistan’s southwestern province of Balochistan. Senior police official Razzaq Cheema confirmed the arrests to CNN.

In response, The Young Doctors Association (YDA) has announced an immediate boycott of all medical services in Balochistan.

The protest comes a day after 13 doctors in Quetta contracted the novel coronavirus.

Covid-19 in Pakistan: According to the Ministry of Health, 3,277 cases of Covid-19 have been diagnosed in the country and 50 people have died.

He is the first major Arab politician to die of Covid-19.

The UN Support Mission in Libya (UNSMIL) said Jibril died after a “battle with the coronavirus infection.”

“Dr. Jibril was particularly dedicated to building civil society and promoting the inclusion of women and young Libyans in politics. Dr. Jibril was a friend and mentor to many and participated most recently in the UN-facilitated Political Dialogue Forum. He will be greatly missed,” Acting Special Representative of the Secretary-General and head of UNSMIL Stephanie Williams said in a statement Sunday.

Here's some background: On March 27, the NFA announced that Jibril tested positive for Covid-19, adding that he was in “stable health on the course to recovery.”

Jibril, 67, served as interim Prime Minister of the opposition government that led the country through the civil war until the first post-Gadhafi elections were held in 2012.

There have been 2,274 new cases of coronavirus in the past 24 hours In Iran, bringing the total number of cases to 60,500, Health Ministry spokesman Kianush Jahanpoor announced on state TV Monday.

Iran has the highest reported number of Covid-19 cases and deaths in the Middle East.

Jahanpoor added 24,237 patients so far have recovered and have been released from hospitals across the country.

If you're just joining us now, here's what has happened since our last catch-up.

US edges towards grim milestone: At least 9,648 people have died in the U.S. from coronavirus, according to Johns Hopkins University's tally of cases. The country has at least 337,646 cases of coronavirus.

The totals include cases from all 50 states, the District of Columbia and other U.S. territories, as well as all repatriated cases.

Without citing evidence, he said it's a "great" and "powerful" anti-malaria drug "and there are signs that it works on this, some very strong signs."

Spain coronavirus outbreak slows down further: The coronavirus outbreak in Spain continues to slow down, with Health Ministry figures showing 637 have died from Covid-19 in the past 24 hours, bringing the total to 13,055 deaths. That represents a rise of 5.1% on Sunday’s numbers, the lowest daily rise, percentage-wise, since early March.

The novel coronavirus outbreak in Spain continues to slow down, with figures released by the Spanish Health Ministry showing 637 have died from Covid-19 in the past 24 hours, bringing the total to 13,055 deaths. That represents a rise of 5.1% on Sunday’s numbers, the lowest daily rise, percentage-wise, since early March.

The Ministry’s data shows there are now 81,540 active cases, an increase of 1,279 from Saturday – the smallest daily rise since March 14. The rise in the number of new cases has been declining in percentage terms since March 24.

There was also a slowdown in the number of people admitted to intensive care units in the past 24 hours, with Spanish authorities counting only 70 new cases -- the lowest increase since March 16.

Some 40,437 people have now recovered from the virus, the health ministry also reported. 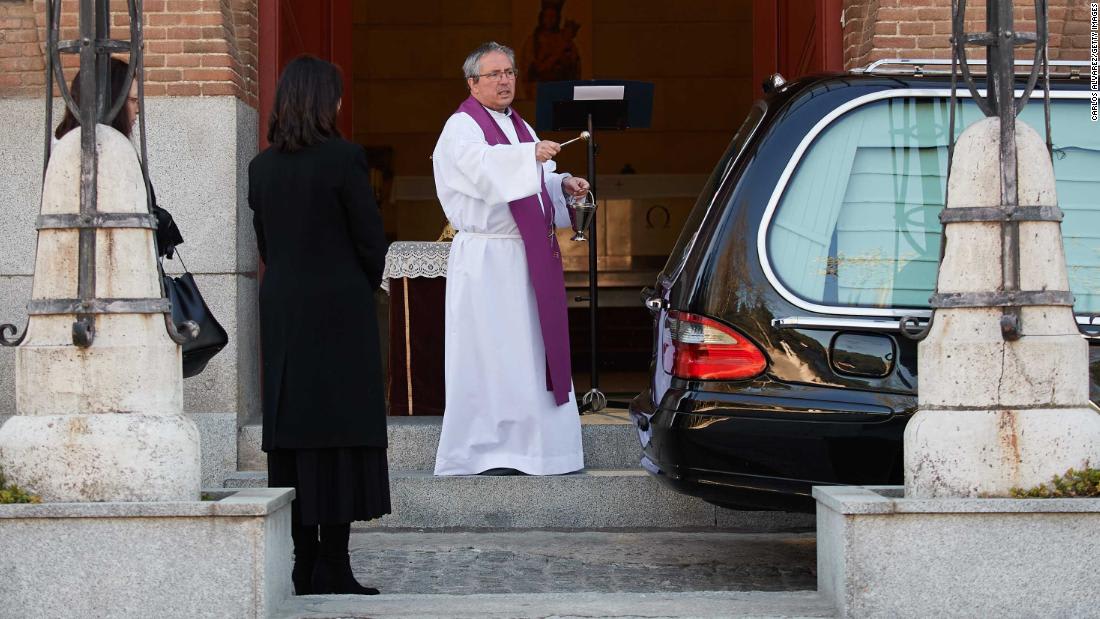 Drive-thru funerals in the epicenter of Spain's coronavirus pandemic

There are at least 337,646 cases of coronavirus in the U.S, according to Johns Hopkins University's tally of cases in the United States. At least 9,648 people have died in the U.S. from coronavirus.

The totals includes cases from all 50 states, the District of Columbia and other U.S. territories, as well as all repatriated cases.

Large numbers of people flocked to popular tourists sites and major cities across China over the country's holiday weekend, despite warnings from health authorities that the risk posed by the coronavirus pandemic remains far from over.

Images from the Huangshan mountain park in Anhui province on Saturday April 4 showed thousands of people crammed together, many wearing face masks, eager to experience the great outdoors after months of travel restrictions and strict lockdown measures.

Such was the rush to get into the popular tourist spot, that at 7.48 a.m., authorities took the unusual step of issuing a notice declaring that the park had reached its 20,000 person daily capacity, and would not be accepting any more visitors, according to state media Global Times.

Restaurants and parks packed: Meanwhile in Shanghai, the famous Bund waterfront was packed with shoppers and tourists, after weeks of being near deserted. Many of the city's restaurants that were shuttered only days ago also appeared to be doing a brisk trade, with several requiring reservations.

A similar story played out in the capital Beijing, with locals flocking to the city's parks and open spaces.

Caution urged: The abrupt return to apparent normality comes more than three months after the virus was first detected in the Chinese city of Wuhan. The outbreak, which has since spread around the world infecting more than a million people, saw much of China brought to a near standstill in an effort to contain transmissions.

At its peak, thousands of new cases were recorded in China every day. However, in recent weeks the rate of infection has slowed significantly. On Monday, China reported just 39 new cases, all but one of which were imported. To date, China has recorded 82,641 cases and 3,335 deaths.

But while the government is slowly relaxing restrictions, Chinese health experts have urged the public to continue to practice caution. 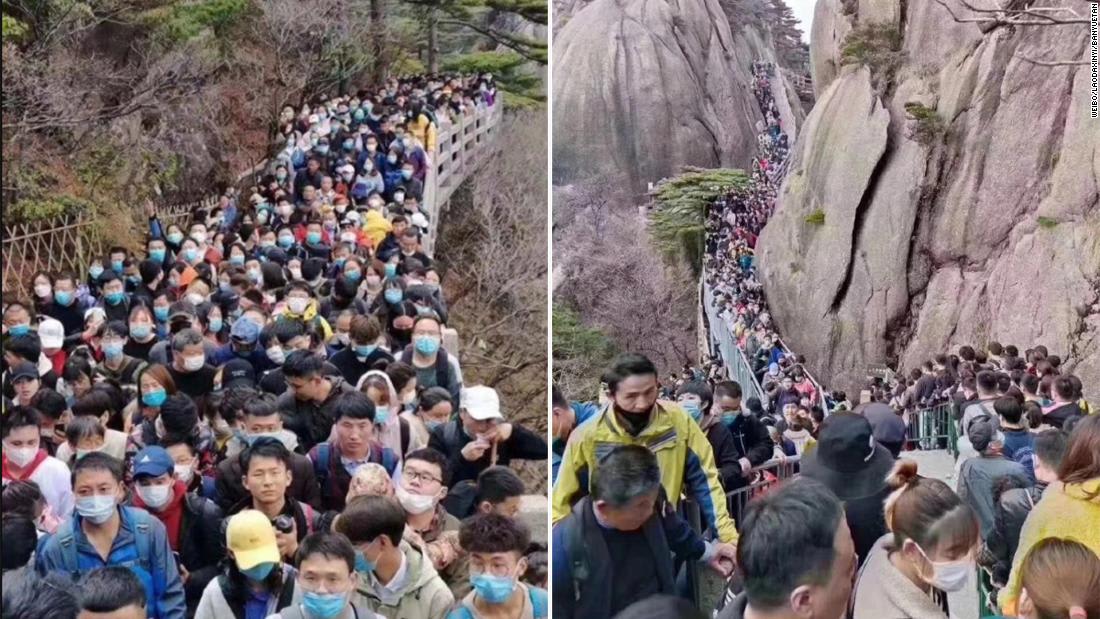 South Korea’s football captain, Son Heung-Min, will carry out mandatory military service with the Marine Corps in his homeland as football’s coronavirus shutdown continues, his agent has confirmed to CNN.

The 27-year-old returned to South Korea on Saturday 28 March and is in the process of completing his 14 days in self-quarantine.

“He will move to Jeju Island as soon as he has completed self-quarantine, and will receive three weeks of basic military training at the 9th Brigade of the Marine Corps beginning on 20th April,” said his agent.
“Basic military training in the army is usually scheduled for four weeks, but the Navy (the Marine Corps) has been changed to three weeks from 2019,” he added.

Military service: Under South Korean law, all able-bodied men between the ages of 18 and 35 are required to perform at least 21 months of military service.

However, any South Korean athletes who win Olympic medals or Asian Games titles are exempt from military conscription.

Son, who represents English Premier League side Tottenham Hotspur at club-level, earned his exemption in 2018 when he led South Korea to win the football gold medal at the Asian Games in Indonesia.

Despite the exemption, athletes are still required by law to serve a mandatory four-week national service in the South Korean military – albeit with the Marine Corps being an exception of three-weeks.

Premier League suspended: On Friday it was confirmed the England’s Premier League season had been indefinitely suspended amid the ongoing pandemic with the League announcing it would resume play “only when it is safe and appropriate to do so.”

Spanish-bought ventilators and other medical equipment held in Ankara by Turkish authorities will take off for Spain on Monday, Spanish foreign minister Arancha González Laya said in an interview with Spanish network Antena 3.

The equipment is expected to be available for distribution among regional governments in Spain on Tuesday. The ventilators, produced by a company in Turkey, have been held by local authorities in Ankara since Friday.

On Friday, the foreign minister said the ventilators would not arrive on time because “the Turkish government understands that they are a priority for the treatment of its patients.”

However, Ankara said that the exporting company lacked the proper authorization because Turkey introduced strict controls on the export of medical equipment a month ago, as the novel coronavirus in the country started to worsen.

The situation was resolved late on Saturday, with the Spanish foreign minister tweeting thanks to her Turkish counterpart for authorizing the export.

“We will always stand by our friend Spain,” Turkish foreign minister Mevlut Cavusoglu tweeted back. “We will overcome these difficult times together.”