The New York City Police Department has lost its 12th member to a suspected case of coronavirus.

NYPD Auxiliary Police Officer Ramon Roman died on Sunday from coronavirus-related complications, according to a daily coronavirus report from the NYPD.

Nearly 20% of its uniformed workforce is out sick.

The city is a hot spot for the virus, with more than 68,000 cases and 2,700 fatalities. The city's hospitals have been struggling to maintain the space, personnel and equipment to treat the growing number of patients.

Yesterday, 6,974 uniformed members of the NYPD were out sick, accounting for 19.3% of the department's uniformed workforce, according to the report. That number has jumped from 12% on March 28.

UK cabinet ministers were not told about Prime Minister Boris Johnson’s deteriorating condition until nearly an hour after he was taken into intensive care, said Michael Gove, Minister for the Cabinet Office.

Appearing on Sky News, Gove was asked whether the government had been upfront with the public about Johnson’s condition, and whether it too was taken by surprise.

“Yes we were," he replied. "The (daily coronavirus) briefing that was given at 5 o’clock, was given at a time when we didn’t know about the deterioration in the prime minister’s condition.”
“We were informed subsequently. The prime minister was admitted to intensive care at 7 o’clock, and that information wasn’t given to us in government -- to those in the cabinet -- until just before 8 o’clock.”

Johnson is still in intensive care, and has received oxygen support.

If you're just joining us, here are the latest developments since our last catch-up.

Concern in Britain: UK Prime Minister Boris Johnson remains in intensive care with coronavirus and has been treated with oxygen, said Michael Gove, Minister for the Cabinet Office. He is not on a ventilator, according to Gove.

US braces for worst: State and health officials have warned that this week may be the hardest yet, and that the coming weeks will be crucial in stemming the virus' spread. The situation is most dire in New York, where at least 4,758 people have died, according to the latest data. Funeral homes have been overwhelmed because of increased demand.

France outbreak worsens: France has not yet reached the peak of its coronavirus outbreak, according to health minister Olivier Veran, who said "we are still in a worsening phase of the epidemic." Deaths have spiked dramatically in the country -- 833 people died from the virus within 24 hours, Veran said yesterday.

Milestone in China: The country where the pandemic began recorded no new deaths yesterday for the first time since January. There were also no locally transmitted infections found yesterday; all new cases were imported from abroad. And tomorrow, the epicenter city of Wuhan will finally lift its lockdown after three months.

India relaxes drug export: India has partially lifted export restrictions on the drug hydroxychloroquine, after imposing a blanket export ban on the drug on Saturday -- just as President Donald Trump requested more to be released to the US.

Doctors attacked: Meanwhile, frontline doctors in India are being attacked and harassed by their communities, due to fears that they may be infected after working with coronavirus patients.

New Zealand controversy: The health minister was demoted and called himself "an idiot" after breaking nationwide lockdown rules by driving to the beach with his family.

Fear in Japan: The country recorded another 252 cases yesterday, and the Prime Minister is expected to declare a state of emergency today. Doctors warn that there isn't enough testing, and many say the emergency declaration may be coming too late.

Doctors in India are being attacked and harassed by their communities, due to fears that they may be infected after working with coronavirus patients.

Last week, a mob in the central state of Madhya Pradesh pelted doctors with stones while they were treating a suspected coronavirus patient.

And a doctor in the city of Surat, in the western state of Gujarat, was harassed by her neighbors on Saturday, according to a senior police official.

"The doctor claims that the neighbors accused her of having the coronavirus and were yelling at her, but the neighbors say that they were angry because the doctor's dog had attacked them," said police commissioner R B Brahmabhatt.

The neighbors were arrested on Sunday and released on bail.

Medical staff in the capital New Delhi also say they have been ostracized and discriminated against. Some doctors have even reported being evicted, or faced threats that their electricity will be cut off.

For weeks, state and federal authorities have urged the public to avoid violence or stigmatizing medical staff, and have praised frontline workers -- but the attacks have continued.

"In this hour of crisis, doctors and nurses in white clothes are a form of God, they are putting themselves in danger to save us," said Prime Minister Narendra Modi on March 25.
"If you see people treating them badly go there and make them understand. Doctors, nurses and medical staff save our lives and we can never repay their debt."

British Prime Minister Boris Johnson was moved to an intensive care unit on Monday after his condition with coronavirus symptoms "worsened," his office said.

By Tuesday morning, Johnson, 55, was still in the ICU and had received oxygen support, Michael Gove, Minister for the Cabinet Office, said in an interview with the BBC.

Here's everything we know:

“One of the reasons for being in intensive care is to make sure that whatever support the medical team consider to be appropriate, can be provided,” Gove said.

Hospitalized on Sunday: Johnson was first admitted to St Thomas' Hospital in London on Sunday evening for what he said were "routine tests" after his coronavirus symptoms persisted 10 days after testing positive.

Intensive care: He was moved to the intensive care unit on Monday at around 7 p.m., Downing Street said. The decision was made by the leader's medical team after his condition worsened over the afternoon on Monday.

Change in condition: The move strikes a sharp contrast to earlier reports on Johnson's condition. During his period of self-isolation, Downing Street had said that Johnson's symptoms were "mild," and on Sunday said his hospitalization was just a "precautionary step."

Who is running the country? While Johnson is in hospital, Foreign Minister Dominic Raab is deputizing for the prime minister "where necessary."

“The prime minister has a team around him who ensure the work of government goes on,” Gove said.
“Dominic (Raab) takes on the responsibilities of chairing the various meetings the PM would’ve chaired but we’re all working together to implement the plan that the PM has set out,” he said.

Johnson was working less last week: The prime minister had a “stripped back diary” last week and was following the medical advice of his doctors, Gove told BBC Radio.

“And all last week he was following the advice he was being given by his doctors -- he had a stripped back diary in order to make sure the appropriate medical advice could be followed.”

“He is receiving the best possible treatment,” Gove said.

Japanese automaker Toyota announced that it will start producing 500-600 medical face shields per week using injection molds and 3D-printing, with plans to ramp up production over time.

"Toyota will do what it can to help efforts on the front lines of treatment and in limiting the further spread of Covid-19, which has become society's biggest priority," said the company in a statement.

These measures will be largely carried out in Japan, though there are also similar efforts being made in overseas factories and branches.

The statement said Toyota will leverage its supply chain to distribute thermometers and other protective equipment. The firm is also working with ventilator manufacturers to try and increase productivity.

Toyota is also considering using its vehicles to transport people from their homes to medical facilities or quarantine centers, so fewer potentially infected people are on public transit or taxis.

As the US military was embroiled in controversy over its handling of an outbreak of coronavirus on one of its Pacific aircraft carriers, China was resuming operations in the South China Sea.

In the past week, the English language website of the People's Liberation Army (PLA) has posted stories on large-scale naval exercises and the sinking of a Vietnamese fishing boat. In addition, it also announced the ramping up of military industries in Wuhan, the original Chinese epicenter of the pandemic.

US military controversy: The US aircraft carrier USS Theodore Roosevelt passed through the South China Sea on its way to Guam, where it is now docked after more than 170 Covid-19 cases were reported on board.

The Roosevelt's commander, Capt. Brett Crozier, was stripped of his command last week after a memo he wrote warning that urgent action was needed to protect the lives of his crew was leaked to the media.

This could be an opportunity for China: Some analysts have suggested that in the South China Sea, even short-term pullbacks can create an opening the PLA could take advantage of.

"I think China is exploiting the US Navy's coronavirus challenges to improve its position in the South China Sea by giving the appearance it can and will operate there at will while the US is hamstrung," said Carl Schuster, a retired US Navy captain and a former director of operations at the US Pacific Command's Joint Intelligence Center.

China has consistently pushed back at the suggestion it is attempting to use the pandemic to gain geopolitical influence. 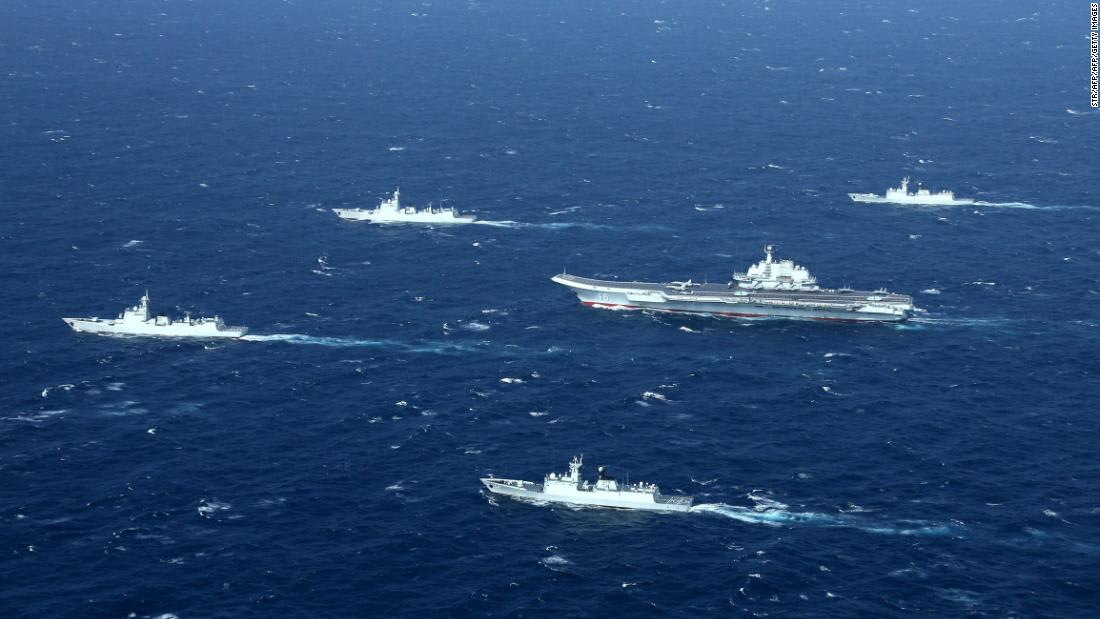 France has not yet reached the peak of its coronavirus outbreak, health minister Olivier Veran said today.

"We are still in a worsening phase of the epidemic," Veran told broadcaster BFM TV.

The country's containment measures and emergency restrictions would last as long as necessary, he said.

Prefects -- states' representatives in a region -- have banned most gatherings. It will be up to the prefects to decide on a case-by-case basis whether they need to to tighten measures like imposing curfews or banning farmers’ markets, said Veran.

This comes after deaths spiked dramatically in France; 833 people died from the virus within 24 hours, Veran said yesterday. The day before, 518 people died.

Editor's note: Peter Bergen is CNN's national security analyst, a vice president at New America and a professor of practice at Arizona State University. The opinions expressed here are his own.

Around the world, some religious gatherings continue to take place, despite widespread knowledge that large groups of people facilitate in spreading the coronavirus -- and in defiance of government restrictions on such gatherings.

In Israel, ultra-Orthodox Jews continue to hold crowded religious gatherings despite the government banning such meetings, according to the New York Times. Predictably, Covid-19 may be spreading up to eight times faster among Israel's ultra-Orthodox Jews than it has among the general population.

In the Pakistani financial capital of Karachi, which has a population of around 15 million, the provincial government ordered a lockdown during Friday prayers when the faithful typically gather in mosques. On Friday, enraged worshippers clashed with police as they tried to enforce the lockdown.

In Baghdad, Iraq, abaya-clad women crowded the shrine of Imam Musa al-Kadhim in late March while implying their faith kept them safe from the coronavirus.

And in the US, a church in Louisiana held services this Sunday despite stay at home orders from Louisiana's governor because of the pandemic. Channeling his inner Franklin D. Roosevelt, the pastor told hundreds of his parishioners, many of whom had arrived on more than two dozen buses, that they had "nothing to fear but fear itself." 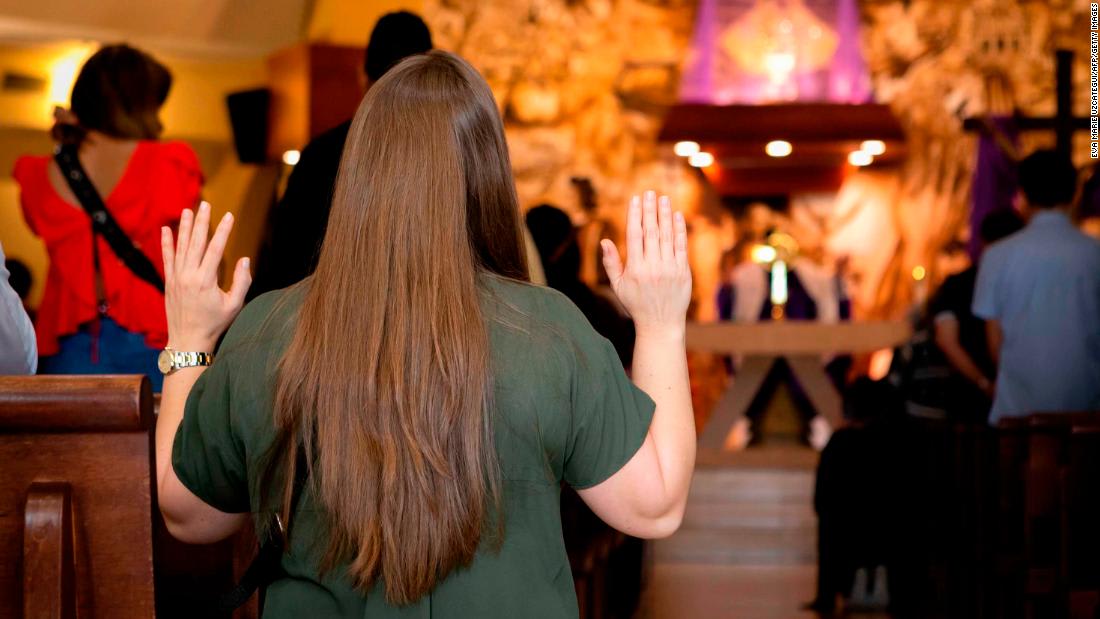 Opinion: Religious gatherings around the globe inflame the virus