US Surgeon General Jerome Adams said by the end of this week, the will have been two million coronavirus tests completed across the United States.

“We are going to be at two million tests this week and it's rapidly ramping up with the commercial industry coming on board. We’re also seeing more people doing antibody testing," Adams said on CBS today.

“I’ve talked with Admiral Giroir, I speak with him every day, he’s our testing czar every day. He assures me that by the end of this month we should be not only doing just diagnostic testing but also having good surveillance testing across the country,” Adams said on Tuesday.

“We are in fact doing surveillance testing in some parts of the country where they haven't seen a big increase in cases. We're not there yet. But we're moving in the right direction,” he added.

Michigan’s largest health care system has about 1,500 staff members staying home because they have symptoms consistent with Covid-19.

“We are following CDC guidelines and asking staff to stay home when they are sick and/or have COVID-19 symptoms,” Media Relations Director Beaumont Health Mark Geary told CNN.

Meanwhile, Henry Ford Health System reports more than 700 staff members have tested positive for coronavirus, according to reporting from the Detroit Free Press.

The coronavirus pandemic is overwhelming, and one of the most excruciating parts for many people is the feeling of utter helplessness in the face of widespread suffering and hardship.

Here's how to help seniors and people with disabilities in your community during the coronavirus pandemic.

CNN’s Impact Your World has compiled a list of donation opportunities and tips to help those affected by the crisis. You can read the full list here.

Formula One has placed 50% of its staff into temporary furlough whilst the sport’s Chief Executive, Chase Carey, will take a significant voluntary salary cut as part of measures to reduce costs during the coronavirus crisis.

In addition, Formula One directors and executives have voluntarily agreed to take a 20% pay cut.

The furloughing of staff will be in place to the end of May.

Staff will use the UK Government’s Coronavirus Job Retention Scheme, which pays those placed on temporary leave 80% of their wages, to a maximum of £2,500 a month, in a bid to help companies retain their workforce and prevent redundancies during the crisis.

Races cancelled and postponed: The current F1 season is yet to start, with two races cancelled – Australia and Monaco – and six more postponed – Bahrain, Vietnam, China, Netherlands, Spain and Azerbaijan – so far.

The season is now scheduled to begin with the Canadian Grand Prix in Montreal on Sunday 14 June, however, organizers have said they will make a decision after the Easter weekend on whether to proceed with the race.

Formula One has said it hopes to resume racing in the European summer and is working on a reduced and rejigged calendar of 15 – 18 Grands Prix, with the anticipation that the season end date will extend beyond the original end date of Sunday 29 November.

The sport’s rules dictate a minimum of eight races must be held for a season to be defined as a World Championship.

Dr. Jerome Adams, the US Surgeon General, urged Wisconsin voters to maintain a safe six-foot distance from other voters and wear a face cloth or covering as they head to the polls.

Wisconsin is holding its primary as scheduled today despite public health concerns.

In an interview on "Today," Adams said "as a black man, I know that people have died for the right to vote. This is very important to our entire country."

"If you're going to exercise your right to vote, do it as safely as possible," Adams told NBC's Savannah Guthrie.

Some background: Every other state with an election scheduled for April postponed their contest or shifted it to by-mail voting only.

But Republicans in Wisconsin who have insisted on holding the election on schedule won two legal battles yesterday, as the state Supreme Court blocked Democratic Gov. Tony Evers' bid to delay it until June and the US Supreme Court reversed a lower court's ruling that gave voters six extra days to return their ballots by mail.

But Monday's court decisions mean Wisconsin is pressing forward — though votes won't be counted until at least April 13.

US Surgeon General Dr. Jerome Adams said that the majority of people in the United States are "doing the right thing" by staying home, social distancing and following other mitigation measures to help fight the coronavirus pandemic.

"Over 90% of the country is actually doing the right thing right now," Adams told ABC's George Stephanopoulos during an appearance on Good Morning America on Tuesday.

"I want the American people to know there is a light at the end of this tunnel and we feel confident if we keep doing the right thing for the rest of this month that we can start to slowly reopen in some places," Adams said Tuesday morning.

The US coronavirus death toll is nearing 11,000 as the country prepares for what the President said will be a "difficult" week and a half. But White House officials say they are encouraged by parts of the country that leaned in heavily to social distancing measures and are now seeing a slowdown in the rate of growth of coronavirus cases.

"I'm seeing mitigation work," Adams said Tuesday. "I am so impressed. I know I've said it a couple times with Washington and with California. Their public health officials there should be applauded because they've given us the blueprint for how we deal with this and the rest of the country."

Police in Italy say they are concerned about criminal organizations, or Mafia, infiltrating "basic needs" sectors of industry and society under financial pressure during the coronavirus lockdown.

"The danger is high because mafia organizations have already started investing in sectors that are still essential during the Covid-19 lockdown: the agriculture-food chain, the supply of medicines and medical equipment, road transport, funeral services, cleaning, sanitation and waste disposal companies", the head of Italian Police, Franco Gabrielli said.

These are sectors that don't require a lot of specialization, so "criminal groups can easily be able to offer services at competitive prices because the companies they control do not comply with environmental, social security and safety at work regulations.”

According to Gabrielli, mafia organizations, in particular the ‘most dangerous’ of them, the ‘Ndrangheta, "could finance the liquidity crisis of large companies, but also of small and medium-sized enterprises, which may not be able to meet their payments due to the lockdown."

By the end of the emergency lockdown, the criminal associations could have polluted the economy, controlling companies previously not infiltrated,” he warns.

Schools around the world have been shut to prevent the spread of the novel coronavirus, but one team of scientists is questioning whether the havoc the closures are causing to millions of people is actually worth it — suggesting that the impact on the pandemic might be smaller than previously thought.

A new study by researchers at University College London said recent modeling studies of Covid-19 suggest that school closures alone would prevent only 2% to 4% of deaths — far fewer than other social distancing interventions.

The research, published in The Lancet Child and Adolescent Health medical journal late on Monday, reviewed 16 studies looking at past epidemics of SARS, MERS and seasonal flu, as well as others modeling the spread of the novel coronavirus, and found that the evidence to support national closures of schools to combat Covid-19 is "very weak." 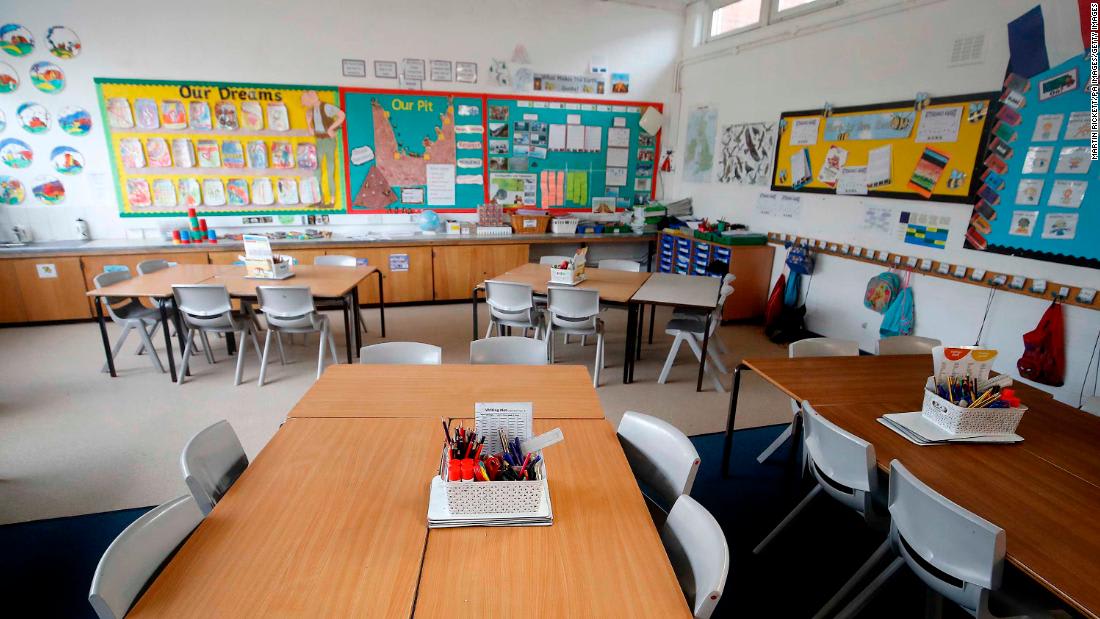 School closures may only have a small effect on stopping coronavirus, study says

US Surgeon General Dr. Jerome Adams said the US can "get back to some sense of normalcy" when a strong public health infrastructure is put in place, including widely available testing.

"We know that normal is going to be a different normal whenever we do re-open. We know that once we get a vaccine we can get more back to the way we treat flu season," he said in an interview on “Good Morning America" today.

"We've got promising therapeutics, hundreds of trials going on across the country and we know that once we get testing out there more widely available ... and once we have a strong public health infrastructure in place to follow up positive tests and isolate case contacts that we will be able to get back to some sense of normalcy," Adams told ABC's George Stephanopoulos.

Adams added US officials are "closely" watching how China and South Korea are reopening after strict coronavirus lockdowns.