Children diagnosed with coronavirus in the US typically have mild cases, the Centers for Disease Controls and Prevention said in a report released Monday.

However, some severe cases in children are being reported and three children have died, the analysis said.

Cases in children make up less than 2% of reported cases in the US, according to the report.

It analyzed 149,760 laboratory-confirmed cases in the US between February 12 and April 2.

Symptoms such as cough and fever were not reported as often in the pediatric cases as in adults, and children also seem to have a lower rate of hospitalizations for the virus, according to the report. 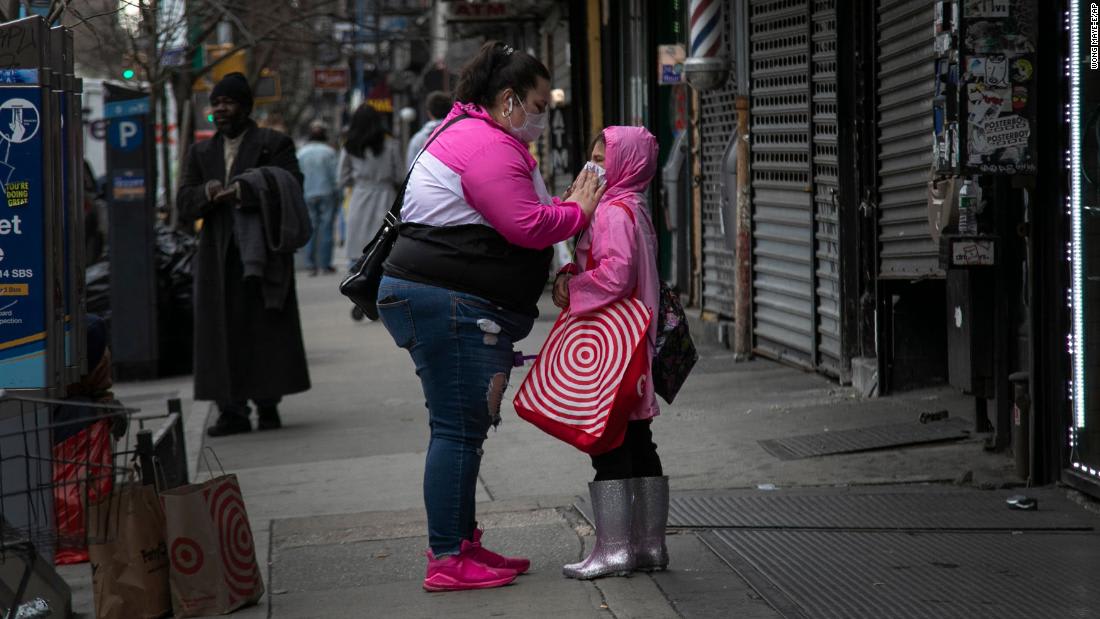 Most cases of coronavirus in children are mild but severe cases have been reported, CDC says

There are at least 368,449 cases of coronavirus in the US, according to Johns Hopkins University's tally of cases.

The US death toll from the virus is nearing 11,000, as the country prepares for what the President has warned will be a "difficult" week-and-a-half -- according to Johns Hopkins' tally, 10,993 people have died.

The total includes virus cases in all 50 states, the District of Columbia and other US territories, as well as all repatriation cases.

Wyoming is the only state not to have reported a death from coronavirus.

A likely underestimate: Health experts warn that the national count of Covid-19 deaths in the US may be an underestimate, as the coronavirus pandemic continues to spread.

Reporting data can lag by an average of one to two weeks, according to the latest guidance from the US Centers for Disease Control and Prevention. 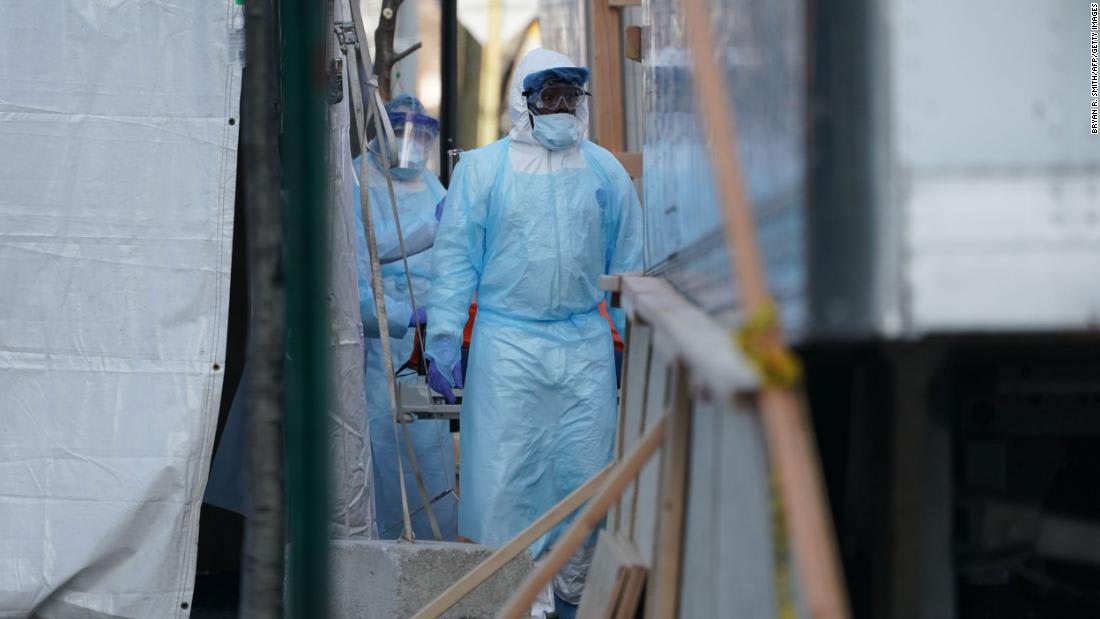 US coronavirus death count likely an underestimate. Here's why

“In testing times, we often observe that the best of the human spirit comes to the fore; the dedication to service of countless nurses, midwives and other health workers, in these most challenging of circumstances, is an example to us all,” she said in a statement.

The Queen says she and her family send their “enduring appreciation and good wishes” to all health workers for their “selfless commitment and diligence”.

Her comments follow a rare televised address on Sunday, in which the monarch called for unity in the face of the pandemic.

The 93-year-old monarch's son and heir, Prince Charles, tested positive for coronavirus last month, and spent time in self-isolation as a result, but has since recovered.

Iran is in talks with other countries about exchanging prisoners amid the coronavirus pandemic, according to Mahmoud Abbasi, the Deputy Justice Minister for Human Rights and International Affairs.

"Given the current sensitive situation and outbreak of coronavirus, we are in talks with countries to exchange prisoners," Abbasi said, according to state news agency IRNA.

Abbasi said 2,600 Afghan convicts were “prepared to leave for their countries, and some Central Asian states have agreed to exchange prisoners,” according to IRNA. He added that the prisoner exchange was justifiable within “the framework of humanitarian policies of Iran.”

Here's some background: Iran has the highest reported number of Covid-19 cases and deaths in the Middle East, with more than 60,000 cases and a death toll of more than 3,700.

The country has temporarily released tens of thousands of prisoners in an attempt to curb the spread of the virus.

German officials warned today that the country should expect to see a rise in coronavirus deaths because of outbreaks in care homes and assisted living facilities.

There will likely be no letting up of new cases in the coming days, warned the president of the Robert Koch Institute, a federal government research agency.

There were 3,834 new cases and 173 deaths yesterday, the institute said.

That brings the national total to 103,375 cases and 1,810 deaths, according to data from Johns Hopkins University.

These figures don't reflect the number of active cases, as many patients have since recovered and been discharged from hospital; rather, it represents the total number of infections since the pandemic began.

Germany has enough intensive care unit beds: Lothar Wieler, head of the Robert Koch Institute, said the country has sufficient ICU capacity for the time being.

"I am happy about each bed and each ventilator,” he said. However, he cautioned that capacity could run out in the future.

The chief minister of India's capital territory Delhi announced that the government will ramp up its testing to mimic South Korea's strategy.

“If we do not test, we will not know who has been infected and who hasn’t been,” said Chief Minister Arvind Kejriwal.

Kejriwal acknowledged that the administration was dealing with a shortage of testing kits, adding that their orders for almost 50,000 kits are finally being delivered.

The Delhi government will start rapid testing for about 100,000 people starting this Friday.

The government has also provided local police with the contact information of 27,702 people who have been placed under self-quarantine, to ensure there are no violations.

Delhi currently has one of highest concentrations of infections in the country, with 523 confirmed cases and seven deaths. The national total stands at 4,778 cases and 136 deaths.

South Korea has been regarded as a model for testing. The country implemented widespread, aggressive testing when the outbreak hit, setting up drive-through test sites. It led to a lot of early detection, which experts say has helped the government stem the spread of the virus.

The state of emergency will last from today through May 6, and be in place across seven virus-hit prefectures, including Tokyo.

Abe had announced yesterday that he would make the declaration today, as the country sees increasing spikes in cases.

Under the declaration, "basic economic activity" will still continue, with public transport and supermarkets remaining open. People are urged to stay at home and not make unnecessary trips.

The New York City Police Department has lost its 12th member to a suspected case of coronavirus.

NYPD Auxiliary Police Officer Ramon Roman died on Sunday from coronavirus-related complications, according to a daily coronavirus report from the NYPD.

Nearly 20% of its uniformed workforce is out sick.

The city is a hot spot for the virus, with more than 68,000 cases and 2,700 fatalities. The city's hospitals have been struggling to maintain the space, personnel and equipment to treat the growing number of patients.

Yesterday, 6,974 uniformed members of the NYPD were out sick, accounting for 19.3% of the department's uniformed workforce, according to the report. That number has jumped from 12% on March 28.

UK cabinet ministers were not told about Prime Minister Boris Johnson’s deteriorating condition until nearly an hour after he was taken into intensive care, said Michael Gove, Minister for the Cabinet Office.

Appearing on Sky News, Gove was asked whether the government had been upfront with the public about Johnson’s condition, and whether it too was taken by surprise.

“Yes we were," he replied. "The (daily coronavirus) briefing that was given at 5 o’clock, was given at a time when we didn’t know about the deterioration in the prime minister’s condition.”
“We were informed subsequently. The prime minister was admitted to intensive care at 7 o’clock, and that information wasn’t given to us in government -- to those in the cabinet -- until just before 8 o’clock.”

Johnson is still in intensive care, and has received oxygen support.