After a day of gains, US stocks lost steam into the close and finished the day lower.

Here's where they ended up:

It's a shortened trading week for US markets, which will remain closed for Good Friday.

Remember: As stocks settle after the trading day, levels might still change slightly.

There are now 15,865 confirmed cases of the coronavirus in California, Gov. Gavin Newsom announced in a press conference today.

An additional 31 more people have died, bringing the state’s total number of deaths to 374.

Newsom reminded residents to practice social distancing and to stay at home to help bend the curve.

Newsom also announced that the state is putting out new guidelines and guidance to help people deal with stress during the crisis. It will have a checklist for adults, caregivers, and children.

At least 16 hotlines are also available for people to help support residents.

Illinois Gov. J.B. Pritzker today announced that in the last 24 hours, the state had 73 Covid-19 related deaths, their largest single-day increase to date.

The governor also said a member of his office has learned they have coronavirus, he announced at a news confernece today.

According to the governor, the individual began to feel unwell on March 26th and was immediately sent home. Everyone in the governor's office was sent home the same day as well.

The person who tested positive "continues to self isolate at home, and it has now been 12 days since that person left the office. And none of our remaining in-office staff have demonstrated symptoms," Pritzker added. 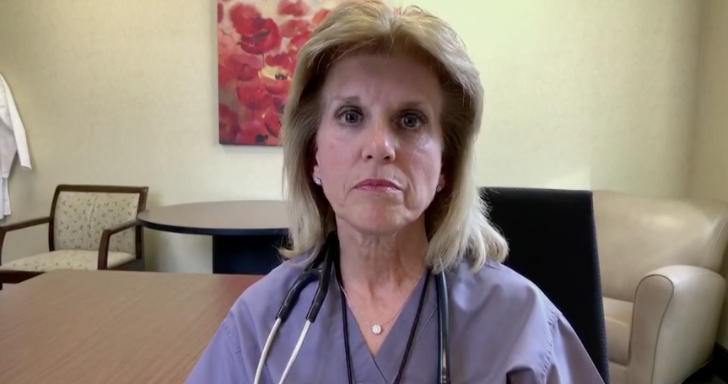 A New Jersey nurse who treated three of her family members with coronavirus said she was fortunate to have the opportunity to be with them while they were sick, while many other patients with the virus cannot see their loved ones.

Acito said she was able to celebrate her mother-in-law's 89th birthday in the hospital. Other doctors and staff sang to her and gave her a piece of cake.

"Having the ability to be with my mother-in-law during the last days was special for me," Acito said. "The rest of the family was happy to know she was not alone and she was being celebrated with her last birthday here on Earth," she later added.

Because no visitors are allowed in hospitals, Acito said it is important for nurses and medical staff to be the stand-in family for patients.

"It is so important to let them know you're here while you're in the room," Acito said "If they can communicate, to ask them about their family, to offer them the opportunity to FaceTime with their family. It just brings more meaning every time you walk into a patient room," she said.

At least 12,021 people have died in the US from coronavirus according to a tally from Johns Hopkins University.

There are at least 383,256 cases of coronavirus in the US

At least 90 passengers are still onboard the Coral Princess after the cruise ship docked Saturday, according to Princess Cruises.

New CDC guidelines, which require cruise travelers to fly on charter planes or take private transportation, are making it more difficult for those individuals to get home.

The 90 passengers still onboard the Coral Princess are international guests who remain on the ship because of current travel restrictions, Princess Cruises said. They are awaiting clearance from their home countries, the cruise line told CNN.

In response to CNN’s request, Princess Cruises is looking into whether or not any Americans remain on the ship.

Additionally, another 93,000 crew members remain at sea on 114 cruise ships that are in and around US waters, according to the US Coast Guard.

Miami-Dade Mayor Carlos Gimenez expressed frustration with the new CDC guidelines during a virtual press conference, saying that these passengers and crew need to get off the ships and get home.

Gimenez said he asked the cruise lines to allow crew members to go home and keep skeleton teams on the ships to minimize the risk of an outbreak.

According to the US Coast Guard, the majority – about 90 – of the cruise ships with tens of thousands of crew members on board are in Miami’s area of responsibility.

The utter mess that the Wisconsin primary became shows how the coronavirus pandemic can interfere with our normal election routine.

Wisconsin is voting in its primary election in the middle of a pandemic. Meanwhile, every other state with an election scheduled for April postponed their contest or shifted it to by-mail voting only.

But most voters and election boards are not used to people voting by mail. If we want them to for the November elections, we need to prepare now.

This means that only about 24% had their ballots mailed to them. Of these, 18% voted absentee (i.e. they had to request their ballot). The other 6% voted in all mail elections (i.e. ballots were automatically sent to them).

Most states, however, do allow for voters to receive their ballot by mail without an excuse. In total, 33 states allow no excuse require absentee voting (28 states including Wisconsin) or have all mail voting (5 states). These states consist of 65% of all the electoral votes in the electoral college. Of the closest 15 states in 2016, 91% of all electoral votes are allotted to states that allow no excuse absentee voting or are all mail.

There are some notable exceptions that don't allow no excuse absentee voting like New York and Texas (where there have been efforts to expand voting by mail), but they are not the rule.

This leaves the majority of states with two choices. Obviously, there could be drastic moves to shift states to all mail voting (a step Maryland has been taking).

An easier path is working within the framework of no excuse absentee voting. It's about ensuring that voters understand that they need to request a ballot in most states to get a ballot sent to them. It's about getting election boards the funds and manpower to count ballots that were sent through the mail.

Without those steps, we could end up with what we're witnessing in Wisconsin.