El Salvador is extending its nation-wide quarantine another 15 days amid the coronavirus outbreak, according to a tweet from the Press Secretary of the Presidency late Monday.

In a separate tweet, El Salvador’s Presidential House said the country’s National Civil Police is complying with Bukele’s orders to be more strict with those who do not follow quarantine orders.

The Presidential House said those who do not comply will be sent to contingency centers, where they will have to spend 30 days in quarantine.

The meeting, to be held by teleconference, will include representatives of Russian research institutes and medical centers that are working on vaccine development and drug-treatment regimens, Peskov said in a conference call with reporters. Ministerial-level officials will also take part, he added.

Putin has been working remotely from his Novo-Ogaryovo residence outside Moscow.

Putin wishes UK Prime Minister speedy recovery: The Kremlin on Tuesday released the text of a letter from Putin to British Prime Minister Boris Johnson, who is currently in intensive care undergoing treatment for coronavirus. In the letter, Putin told Johnson his "energy, optimism and sense of humor" will help defeat the illness.

Iran has been seeing a “flattening off” of the number of new coronavirus cases, the WHO East Mediterranean Regional Office (EMRO) said in a press conference on Tuesday.

"Due to an impressive scaling up of many of the control measures, we have seen a flattening off of the number of cases in Iran and in fact, some suggestion, in recent days of perhaps a decline in the number of new cases,” said Richard Brennan, Acting Regional Emergency Director for WHO EMRO.

Iran is the worst affected country in the Middle East, with the highest case count and death toll.

Jahanpoor said there are 2,089 new cases of coronavirus in the past 24 hours, bringing the total number of cases to 62,589.

If you're just joining us, here are the latest developments since our last catch-up.

Japan declares state of emergency: PM Shinzo Abe has officially declared a state of emergency until May 6 across seven virus-hit prefectures, including Tokyo. "Basic economic activity" will still continue, with public transport and supermarkets remaining open. People are urged to stay at home and not make unnecessary trips.

Spain’s coronavirus case and death rate is increasing again: The rate of new infections and deaths from the novel coronavirus in Spain has increased after a week-long decline. Some 743 people have died in the past 24 hours – a 5.7% increase in total deaths.

Italy reports health worker deaths: Ninety-four doctors have died of coronavirus, the Italian Association of Doctors said Tuesday. Twenty-six nurses have also died after contracting the virus, according to the Italian Federation of Nurses.

Concern in Britain: UK Prime Minister Boris Johnson remains in intensive care with coronavirus and has been treated with oxygen, said Michael Gove, Minister for the Cabinet Office. He is not on a ventilator, according to Gove, who himself is self-isolating after a member of his household displayed coronavirus symptoms.

US braces for worst: State and health officials have warned that this week may be the hardest yet, and that the coming weeks will be crucial in stemming the virus' spread. Nearly 11,000 people have died, and funeral homes have been overwhelmed.

Outdoor exercise restricted as France’s outbreak worsens: The mayor of Paris has said that from Wednesday, people wishing to exercise outdoors in the French capital will have to do so before 10 a.m. or after 7 p.m. local time. France has not yet reached the peak of its coronavirus outbreak, according to health minister Olivier Veran, who said "we are still in a worsening phase of the epidemic."

Milestone in China: The country where the pandemic began recorded no new deaths yesterday for the first time since January. There were also no locally transmitted infections found yesterday; all new cases were imported from abroad. And tomorrow, the epicenter city of Wuhan will finally lift its lockdown after three months.

India relaxes drug export: India has partially lifted export restrictions on the drug hydroxychloroquine, after imposing a blanket export ban on the drug on Saturday -- just as President Donald Trump requested more to be released to the US.

New Zealand controversy: The health minister was demoted and called himself "an idiot" after breaking nationwide lockdown rules by driving to the beach with his family.

UK Cabinet minister Michael Gove says he is “isolating” himself because one of his family members has started to display coronavirus symptoms.

On Twitter, Gove said: “In accordance with the guidance, I am isolating at home after a member of my family started to display mild symptoms of coronavirus on Sunday. I have not displayed any symptoms and am continuing to work as normal.”

Gove is one of several UK officials to self-isolate or test positive for Covid-19. Health Secretary Matt Hancock had also tested positive for the coronavirus, and England's Chief Medical Officer Professor Chris Whitty said in a tweet on March 27 that he had coronavirus symptoms and would be self-isolating at home for seven days.

Gove appeared on TV and radio news shows in the UK on Tuesday morning to provide an update on the Prime Minister’s condition.

Johnson in intensive care: UK Prime Minister Boris Johnson was moved to an intensive care unit Monday after his condition with coronavirus symptoms "worsened," his office has said.

Johnson, 55, was first admitted to St Thomas' Hospital in London on Sunday evening for what he said were "routine tests," saying on social media that he was in "good spirits."

But the apparent change in the leader's health has shocked the nation, with politicians from his party and the opposition voicing their support for the leader, as the country battles an outbreak that has killed more than 5,000 people.

The rate of new infections and deaths from the novel coronavirus in Spain has increased after a week-long decline, data from the Spanish Health Ministry released on Tuesday shows.

Figures released by the ministry show that 743 people have died in the past 24 hours – a 5.7% increase in total deaths. This is a slight acceleration on Monday’s data, which recorded 637 new deaths – a 5.1% increase on the previous day’s total deaths.

The number of active cases has also gone up from 81,540 to 83,504, representing a growth of 2.4% on Monday’s numbers. That also shows an acceleration compared to Monday, where there was only a 1.6% increase

Jump in ICU patients: There was also a jump in the number of patients admitted to intensive care units in the past 24 hours, with Spanish authorities counting 130 new cases. Monday saw the lowest daily increase since March 16, with only 70 new cases in Spanish ICUs.

Some 43,208 have now recovered from the virus, according to the health ministry.

Ninety-four doctors have died of coronavirus, the Italian association of doctors said Tuesday. Twenty-six nurses have also died after contracting the virus, the press officer of the Italian federation of nurses said, adding that there were 6,549 infected nurses in total.

As of Monday, the total number of healthcare workers infected by coronavirus is 12,681, according to the Italian Institute of Health.

Protective equipment shortage: A lack of proper protective gear has made contagion inside healthcare facilities a contributor to the rampant spread of the virus. Some of the best health structures in Europe are in northern Italy, but they were pushed to near collapse with the sheer number of Covid-19 patients in need of urgent care.

A school district in Missouri has suspended the home delivery of meals to students following the deaths of two school bus drivers.

The Ferguson-Florissant district serves students in a northeastern suburb of St. Louis.

One driver who supported food distribution at McCluer North High School died after testing positive for coronavirus, said a letter from the district Superintendent Joseph Davis.

The second driver died after a prolonged illness unrelated to coronavirus -- but had symptoms of the virus before death, according to the letter.

The suspension will last through April 10, and is meant to keep students, families and the employees of the district safe, the letter said. 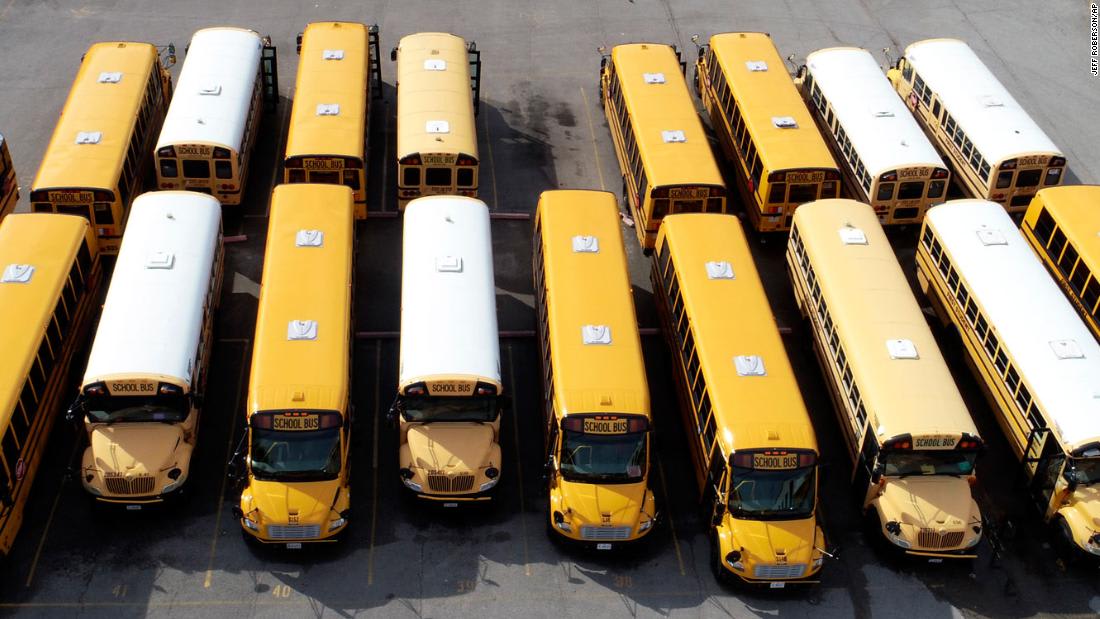 The US coronavirus death toll is nearing 11,000 as the country prepares for what the President said will be a "difficult" week and a half.

But White House officials say they are encouraged by parts of the country that leaned in heavily to social distancing measures and are now seeing a slowdown in the rate of growth of cases.

"We are not only seeing remarkable progress in Washington state and in California where the numbers remain low and steady," Vice President Mike Pence said yesterday. "But we are also beginning to see a leveling."

There are now more than 368,000 cases in the US, according to Johns Hopkins University.

"I don't think anyone has ever mitigated the way I've seen people mitigate right now. It's never happened in this country before. I am optimistic. Always cautiously optimistic," said Dr. Anthony Fauci, head of the National Institute of Allergy and Infectious Diseases.

Read more about the situation in the US here: 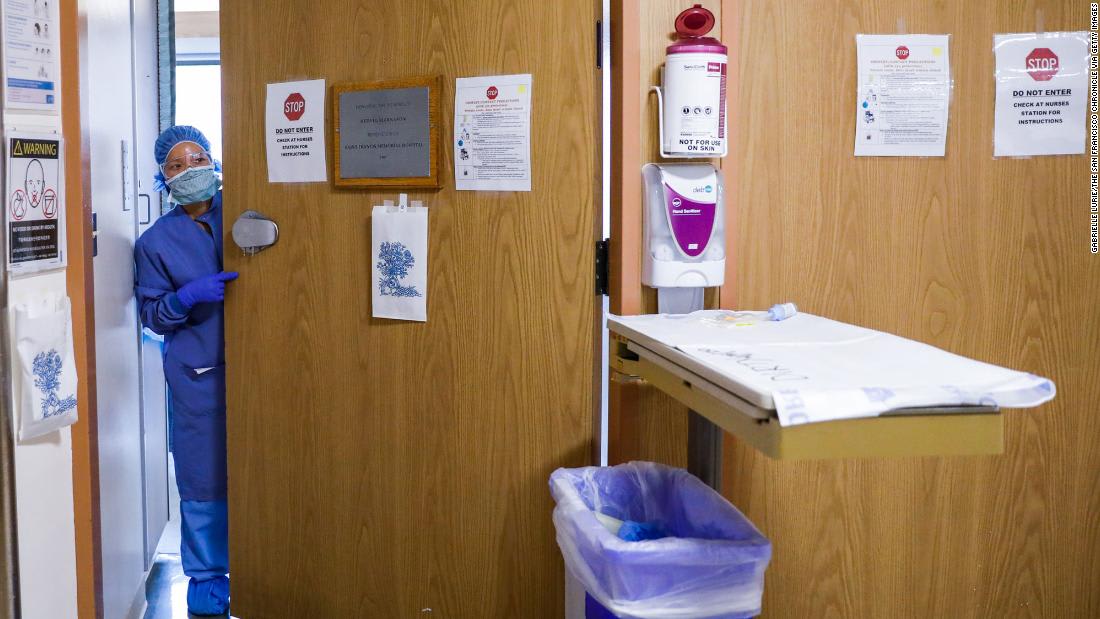