US Immigration and Customs Enforcement told congressional staff Tuesday that it’s reviewing cases of individuals in detention who may be vulnerable to the coronavirus, following repeated calls from lawmakers to release detainees.

The agency, in an email obtained by CNN, told the congressional staff that it has instructed its field offices to "further assess and consider for release certain individuals deemed to be at greater risk of exposure, consistent with CDC guidelines, reviewing cases of individuals 60 years old and older, as well as those who are pregnant.”

“Additionally, efforts to identify other individuals who may be more vulnerable to COVID-19, based on risk factors identified by the CDC, other than age and pregnancy, are ongoing, based on the recommendations of CDC,” ICE said.

Nineteen detainees in ICE custody have tested positive for coronavirus, according to the agency. 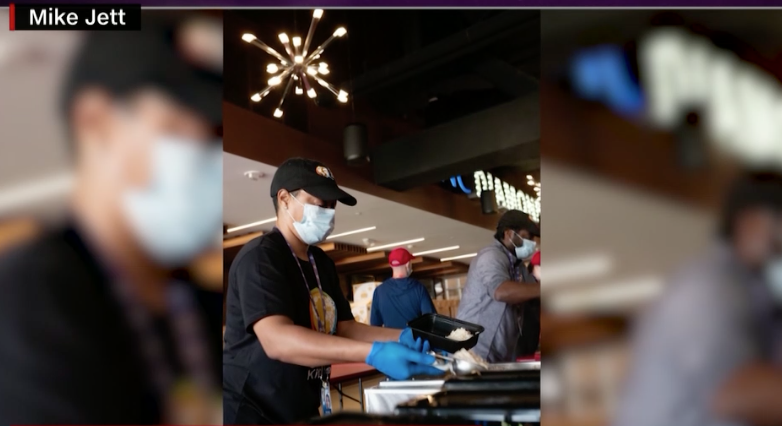 Famous chef José Andrés has teamed up with Nationals Park in Washington, DC, to distribute thousands of meals to people in need during the coronavirus pandemic.

Andrés is the founder of World Central Kitchen, a charity that has been serving low income communities battling the virus in more than 25 cities across the country.

He said it is important to help people during this pandemic because there are less volunteers and less resources for those experiencing homelessness. Andrés said his charity is not only providing meals, but also giving people hand sanitizer and educating them about social distancing.

"If we are not careful, we may have a humanitarian crisis as many people are losing their jobs and as many NGOs are not able to be providing services that normally they provide," Andrés said.

The charity delivers some food, but has also partnered with elderly homes and is in the process of partnering with delivery companies.

Having a kitchen at the National's stadium allows Andrés to bring food to not just people in Washington, DC, but also in Virginia and Maryland.

Andrés said keeping everyone safe and healthy is a priority.

"We've been getting experience in how to do it right, protecting our teams, and also protecting the people receiving our meals," he said.

California Gov. Gavin Newsom announced that shipments of ventilators will arrive in hotspots in New York, New Jersey and Illinois as early as Tuesday night, as his state began flying a surplus of 500 ventilators to states in need.

He continued: “The Vice President was correct ventilators are going to DC, Delaware, ventilators are going to Maryland, and likely Nevada. So that was the determination; it was done through the collective wisdom of our partners at FEMA ... it was done in collaboration with their expectation and needs of what is required of the moment on the ground, based upon that data, and that collaborative engagement, we made this determinations working together, including with the vice president and his (White House coronavirus) task force.”

Newsom said the 500 ventilators are being loaned after the state was able to refurbish and purchase sufficient equipment for the states own needs.

“Because we feel we're adequately resourced for the moment — again, in a dynamic world, where things can change, and we're confident that the number of ventilators that we currently have in possession are adequate to the task in the very short term," he said.

The ventilators being shipped are part of California’s own supply, and are being distributed as a loan.

President Donald Trump met by telephone with leaders from the banking industry Tuesday about Paycheck Protection Program loans for small businesses after the program had rocky rollout.

The program was initially met with confusion and a bit of pushback from some banks who claimed they didn’t have enough information about the program, or guarantees that they would ultimately be paid back by the government.

JP Morgan Chase told its customers last week it would not be able to start accepting applications for the loan when the program rolled out Friday, because it was “still awaiting guidance from the SBA and the US Treasury.”

But that confusion seemed to be cleared up by Tuesday, when the bank’s Chief Operating Officer Gordon Smith thanked the SBA and Treasury Department for working with the bank “seven days a week late, late into the night in very close partnership to make sure that we could deliver the program.”

Treasury Secretary Steven Mnuchin told reporters the issues were due to “a lot of new users coming onto the system.”

“They’re all getting authenticated. We’ll get them all approved,” he said.

During the meeting, Trump acknowledged that there had been a few issues, but wrote them off as normal.

“There are a few glitches, very few,” the President said. “Any little glitch we had worked out within minutes. Within hours. There were a couple, a little on applications. They wanted to work it a little bit differently, banks had some suggestions and it was all done probably I would say 100% of it in the first day.”

Work on a new round of payouts for small businesses is already in the works, Trump and Mnuchin said.

"My team and I have been working hard to reduce the number of individuals housed in state correctional facilities," the governor said.

He continued: "We are doing everything that we can to protect those individuals who remain incarcerated in these facilities, and we are focused on protecting our corrections and juvenile justice staff with PPE and medical checks as they perform a vital function to keep our communities safe."

After a day of gains, US stocks lost steam into the close and finished the day lower.

Here's where they ended up:

It's a shortened trading week for US markets, which will remain closed for Good Friday.

Remember: As stocks settle after the trading day, levels might still change slightly.

There are now 15,865 confirmed cases of the coronavirus in California, Gov. Gavin Newsom announced in a press conference today.

An additional 31 more people have died, bringing the state’s total number of deaths to 374.

Newsom reminded residents to practice social distancing and to stay at home to help bend the curve.

Newsom also announced that the state is putting out new guidelines and guidance to help people deal with stress during the crisis. It will have a checklist for adults, caregivers, and children.

At least 16 hotlines are also available for people to help support residents.