Spain will soon start the process of de-escalation of the current lockdown measures in place to mitigate the novel coronavirus pandemic in the country, Spanish Prime Minister Pedro Sanchez said today, as he asked Parliament to approve his request to extend the country’s state of emergency until April 26.

“We have reached the peak and now the de-escalation begins,” Sanchez told a nearly empty Spanish Parliament Thursday, as most lawmakers are working from home.

He cautioned however, that return to normal life would be “gradual”, in line with the severity of the current health crisis.

“The climb has been difficult, as the descent will also be.”
“We are facing the biggest threat to the planet’s public health since the flu of 1918,” Sanchez said, explaining that the resumption of normal activity would only happen in phases. “The last thing we should allow is a step backwards because that would be more than a setback” but “it would be a rebound”, for the virus.

The head of the Spanish government went on to say that “Europe cannot afford to look the other way,” when it comes to the novel coronavirus and called on MPs to unite and advocate for a united European response to the crisis. “The European Union is in danger if there is no solidarity against the virus.”

The Spanish Prime Minister told opposition MPs that his government is “working on a plan” to slowly bring the country back into some form or “normality” but warned: “We can’t even know what kind of normality we’re returning to.”

Spain has been the world's second most heavily affected country by the coronavirus pandemic so far, after the US. Almost 150,000 confirmed cases of the virus have been detected and the death toll currently stands at 14,792.

The number of confirmed coronavirus cases in Russia has risen by more than 1,000 in a single day, with the country's coronavirus tracking headquarters announcing a total of 10,131 infections in the country.

On Wednesday morning, there were only 8,672 confirmed cases in the country. So far, Russia has recorded at least 63 fatalities from the virus.

Russian President Vladimir Putin previously said his country had acted early to keep the virus under control, but Russia has gradually stepped up measures to contain its spread, closing borders and directing citizens to stay at home.

A special flight chartered by the US government to repatriate American citizens from Russia departed Moscow this morning, according to the US embassy.

“It's been a long night at the airport in Moscow as we've worked to get folks on this charter flight home to family and friends in the United States,” US Ambassador John Sullivan said in a statement posted on Twitter by embassy spokesperson Rebecca Ross.
“My sincere thanks to everyone who helped.”

Separately, a flight on Aeroflot, Russia’s national carrier, landed late on Tuesday at New York’s JFK airport carrying Americans returning from Russia. An earlier Aeroflot flight to New York had been cancelled at the last minute by Russian aviation authorities.

“We are working hard to confirm who was on the Aeroflot flight and reconcile that against the list of U.S. citizens and Lawful Permanent Residents who registered for our charter flight,” the US embassy in Moscow said in a statement.

Russia has officially confirmed 8,672 cases of novel coronavirus, according to Johns Hopkins University.

Bangladesh has imposed lockdown restrictions on its southern district of Cox’s Bazar, in an attempt to prevent the spread of coronavirus from reaching the sprawling and crowded refugee camps that house about 1 million Rohingya people.

Under the restrictions, which went into effect on Wednesday, all roads, waterways and air routes are sealed for any in- and outbound public transport, Deputy Commissioner for Cox’s Bazar Kamal Hossain told CNN.

“People are advised to stay inside their homes,” he said.

Food supplies, medicine and other life-saving emergency services are exempted.

“People may experience inconvenience in the beginning but in the long run it will save their lives. Food and medical services are open in full swing in Rohingya camps. As the camp areas are overcrowded, it is important to protect the area from coronavirus,” Hossain said.
“District administration has asked all concerned to ensure the well-being of Rohingya community during this difficult time.”

The announcement comes about two weeks after the district reported its first coronavirus case. Bangladesh has more than 200 cases of Covid-19 and 20 deaths, according to Johns Hopkins University.

The camps, located about an hour’s drive from Cox's Bazar city, are home to as many as 1 million displaced people -- the largest such refugee settlement in the world.

Many of the refugees have been languishing in the overcrowded camps since fleeing persecution and violence in neighboring Myanmar.

There are concerns that an outbreak in the camps – where social distancing is almost impossible and there is limited access to adequate hygiene and health facilities -- would be disastrous.

Non-essential services in the camps have stopped: In late March, the Bangladeshi government confirmed that most services in the refugee camps would be suspended, in an attempt to prevent an outbreak of the virus. However, emergency work would continue.

UNHCR is building an isolation and treatment center in the camps: The UN refugee agency said the facility, which will provide care for up to 200 people, will help the refugee and local population. “We are in a race against time,” said UNHCR country representative for Bangladesh, Steven Corliss in a video statement.

Cobra, the UK government’s emergency committee, will meet today to discuss options to review coronavirus restrictions -- but the culture minister has downplayed the likelihood they will be lifted.

The restrictions on people’s movements were announced by Prime Minister Boris Johnson almost three weeks ago, and are due to be reviewed by Monday.

"We’ve always said though, that we would review these measures on a periodic basis," culture minister Oliver Dowden told BBC TV on Thursday.
"Cobra will meet today to determine that process – what evidence to consider.
"But I think you will have seen … these measures are starting to work. Now is not the time to be changing course."

A Downing Street spokeswoman said the Cobra meeting will be held "virtually".

No possibility: Scottish First Minister Nicola Sturgeon said she doesn’t think there is any possibility or likelihood that the restrictions will be lifted soon.

Sturgeon told Sky News today it’s important the current rules remain in place for the time being. "We don’t yet have enough data from what has happened so far to know for sure the impact they’re having. And of course we continue to see the number of deaths from coronavirus rising," she said.

Newly-elected UK opposition Labour leader Keir Starmer has called on the government to publish its strategy to end the coronavirus lockdown.

“I’m not calling for precise timings, but the strategy. This is incredibly difficult on people and we need to know that plans are in place, and what they are,” he said today in a tweet.

The British government brought in coronavirus containment measures for an initial three-week period on March 23.

More than 61,000 coronavirus cases and at least 7,000 deaths have been recorded in the United Kingdom, according to Johns Hopkins University.

British scientists have pushed back against an influential new coronavirus model that predicts the UK will be the worst-hit European country, with a death toll from Covid-19 possibly much higher than previously thought.

The grim forecast came from the Institute for Health Metrics and Evaluation (IHME) at the University of Washington's School of Medicine in Seattle on Tuesday. It predicted 66,314 people would die of Covid-19 in the UK by early August.

The British government's plan for tackling the epidemic has been largely informed by a study from the Imperial College London, which said that a lockdown and social distancing measures would -- hopefully -- limit the number of deaths to between 20,000 and 30,000.

Models likely to change "dramatically": Several high-profile scientists in the UK have already voiced their concerns over the IHME model.

Professor Sylvia Richardson, of Cambridge University and the co-chair of the Royal Statistical Society Task Force on Covid-19, told the Science Media Centre the projections are based on "very strong assumptions about the way the epidemic will progress."

She said the model was "based mostly on using the experience in other countries to fit a smooth curve to the counts of deaths reported so far in the UK, rather than any modeling of the epidemic itself."

"Methods like this are well known for being extremely sensitive, and are likely to change dramatically as new information comes in," Richardson added. 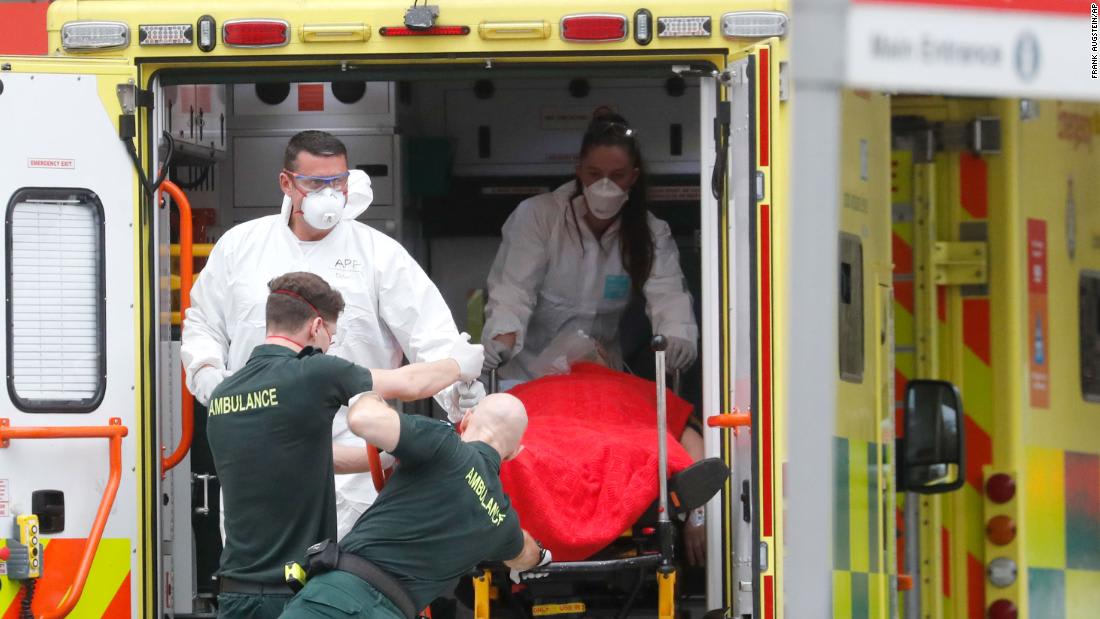 New US model predicts much higher Covid-19 death toll in UK. But British scientists are skeptical

A man in New Zealand has been sentenced to three months in jail after spitting at police, according to a New Zealand Police statement.

The man pleaded guilty to aggravated assault against police in a hearing on Thursday at New Plymouth District Court on the country's North Island.

Although police didn't explicitly say the incident was coronavirus-related, they eluded to the current outbreak in their statement.

"In the current environment we have identified spitting as an escalating risk to both police officers and the community and it will not be tolerated," the statement said.

In New Zealand, a person could face 14 years in jail if they spit or cough on another person and infect them with a disease.

Other cases: In a separate incident on Wednesday, police said two teenagers were being spoken to by police when one said that he had Covid-19, and spat in the face of the officer.

"As a result of this assault, the officer will no longer be able to perform his duties within the community and will be in self-isolation for 14 days from his family," police said in a statement.
"Such behaviour is extremely concerning and dangerous. Police staff should not be targeted in such a way and we need to ensure the community is safe from such behaviour.

New Zealand has 1,239 confirmed and probable coronavirus cases, including one death.