President Trump approved disaster declarations for Alaska and Idaho due to Covid-19.

These are the 53rd and 54th federal disaster declarations approved by the President in response to the coronavirus pandemic.

So far, 49 states, the US Virgin islands, the Northern Mariana Islands, the District of Columbia, Guam and Puerto Rico have all received a federal disaster declaration.

Wyoming is the only state that does not have a federal disaster declaration. However, Gov. Mark Gordon has asked for the federal government to approve his request for one.

The declaration would provide "the opportunity for assistance from the US Army Corps of Engineers for the construction of temporary medical facilities, if needed," Gordon said.

"It also opens up our opportunity to receive additional federal resources and services for individuals," Gordon added.

The US has never had all 50 states under federal disaster declarations simultaneously. 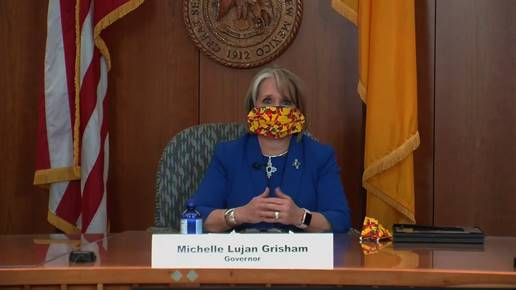 “We are wearing them… to demonstrate that we take this very seriously," she said

Kansas Gov. Laura Kelly's administration filed a lawsuit this afternoon with the Kansas supreme court over an order that sought to limit religious gatherings in the state, the Democratic governor announced at a press conference Thursday.

"After consulting with my chief counsel this afternoon, I have instructed him to file suit against the Legislative Coordinating Council in order to ensure that politics does not continue to hinder our ability to save Kansas lives," Kelly said.

The state's Legislative Coordinating Council, composed of House and Senate leaders, voted along party lines Wednesday to throw out the order after the state's attorney general issued a memo advising law enforcement and prosecutors not to enforce Kelly’s order, the memo said.

"The actions of the Republican legislative leaders jeopardize both the health and safety of Kansas," Kelly warned. "We do not have time to play political games during a pandemic."

The governor's order came on the heels of news that three of Kansas’ coronavirus clusters were tied to church-gatherings, according to Lee Norman, secretary of Kansas Department of Health and Environment.

"The physical church itself, while sacred and beloved, has never defined Kansans' deep and abiding faith," Kelly wrote today on her Twitter account.

"I encourage Kansans of all faith traditions to embrace alternate forms of worship," the post said.

The death occurred April 5 at Bellevue Hospital, according to the city’s Department of Corrections. The department has a permanent facility at Bellevue.

"Our deepest condolences go out to the detainee's family in their time of grief," Peter Thorne, the city’s DOC Deputy Commissioner of Public Information, told CNN in a statement. "The safety and well-being of those in our custody remains our number one priority."

A Department of Corrections spokesperson told CNN Thursday that it was not identifying the inmate pending family notification, but noted that the inmate was admitted to Bellevue on March 26.

The spokesperson also said that all inmates and staff are screened for potential Covid-19 symptoms upon entry to any facility on Rikers.

As of last Friday, face masks are being distributed to all staff and inmates, the spokesperson said.

"Today is a day that the history books will look back on as a good day for New York City," Council Speaker Corey Johnson said. "This is a step forward, this is progress, this is the right thing to do."

The jail, which is on an island in the East River, has become a symbol of the ills of pretrial detention, most famously in the case of Kalief Browder. Browder took his own life after spending three years incarcerated at Rikers Island without being convicted of a crime.

The jail is also notorious for its violence and poor conditions. The US attorney's office for the Southern District of New York reached a settlement with the city in 2015 after a multi-year investigation found adolescent inmates were not protected from "the rampant use of unnecessary and excessive force by New York City Department of Correction staff and violence inflicted by other inmates."

The Texas Health and Human Services Commission has adopted an emergency rule to temporarily allow more nurse aides to work in long-term care facilities, according to a press release from Gov. Greg Abbott's office.

The rule allows nursing facilities to hire people to provide nurse aide services without completing a full certification program within their first four months of employment.

This will expand the amount of direct care workers and help combat critical staffing shortages at long-term care facilities, according to the release.

Utah Gov. Gary Herbert has issued an executive order requiring everyone traveling into the state to register their travel plans with the state.

The order applies to all adults starting Friday morning, whether they arrive by air or by ground.

In a press release, the governor’s office says all visitors will get instructions on how to register via an automatic text message when they arrive in the state.

“Our goal is to trace potential cases of Covid-19 in inbound travelers,” Herbert said.

The state says they will share only general information they collect on travel, with no personally identifiable information released publicly.

Universal Orlando Resort and Universal Studios Hollywood in Florida will remain closed at least through May 31 due to the coronavirus pandemic, the company said Thursday.

The company also address employee compensation during the closure.

Louisiana Gov. John Bel Edwards announced Thursday he approved the first grant from the governor’s Covid-19 Response Fund, which will help a nonprofit organization feed children through the summer across South Louisiana.

The fund issued a $100,000 grant to the Three O’Clock Project, which expanded its meal distribution services after some public school systems shuttered their cafeterias.

“Feeding our state’s children is one of the many challenges we have faced during this Covid-19 pandemic. Daily nutrition is essential to fighting child hunger, and this grant will ensure that Louisiana’s children will still receive meals during this challenging time in our state,” Edwards said.

Baker announced on Thursday that a new hospital site will open at the Boston Convention Center on Friday which will have a total of 1,000 beds; 500 will be used for medical and 500 for the homeless/unsheltered population.

The medical beds will be dedicated to those who were in the hospital and are now recovering, but need a lower level of care. The site will be called Boston Hope.

Massachusetts has also received 100 more ventilators from the federal stockpile and five have been donated from Boston Children’s Hospital, Baker said.

Some context: In his briefing on Wednesday, Baker cited a report from the Pioneer Institute that said as many as 25% of the state’s working population could be unemployed by June.