If the US ends social distancing and other coronavirus mitigation strategies by May 1, as President Donald Trump has encouraged, case numbers in the country could rebound, officials warned.

The projections are based on new modeling scenarios run by the Institute for Health Metrics and Evaluation (IHME) at the University of Washington that assume social distancing policies will end from next month.

The projections are based on new modeling scenarios run by IHME that assume social distancing policies will end from next month.

"If we were to stop at the national level May 1st, we're seeing (in models) a return to almost where we are now sometime in July, so a rebound ... Definitely there's a very substantial risk of rebound if we don't wait to the point where most transmission is near zero in each state."

The research center plans to release state-level analyses based on the new models next week, Murray said.

The warning comes after Trump said he wanted to reopen the country's economy, despite many researchers and medical staff saying it's far too early for such a move.

"I would love to open (the economy). I have not determined anything, the facts are going to determine what I do. But we do want to get the country opened, so important," Trump said at a briefing on Friday.

The African community in the southern Chinese city of Guangzhou is on edge after widespread accounts were shared on social media of people being left homeless this week, as China's warnings against imported coronavirus cases stoke anti-foreigner sentiment.

In Guangzhou, Africans have been evicted from their homes by landlords and turned away from hotels -- despite many claiming to have no recent travel history or known contact with Covid-19 patients.

CNN interviewed more than two dozen Africans living in Guangzhou, many of whom told of the same experiences: being left without a home, being subject to random testing for Covid-19, and being quarantined for 14 days in their homes, despite having no symptoms or contact with known patients.

Fears of an imported second wave: This comes amid heightened media coverage of the so-called second wave of coronavirus cases, emanating from infections outside China.

The fears aren't unfounded -- Hong Kong, not far from Guangzhou, has been hit hard by a second wave. At the start of March, there were only 150 cases in the city of 7.5 million, suggesting the crisis had eased. Now it has 990 cases -- and many were imported from overseas. 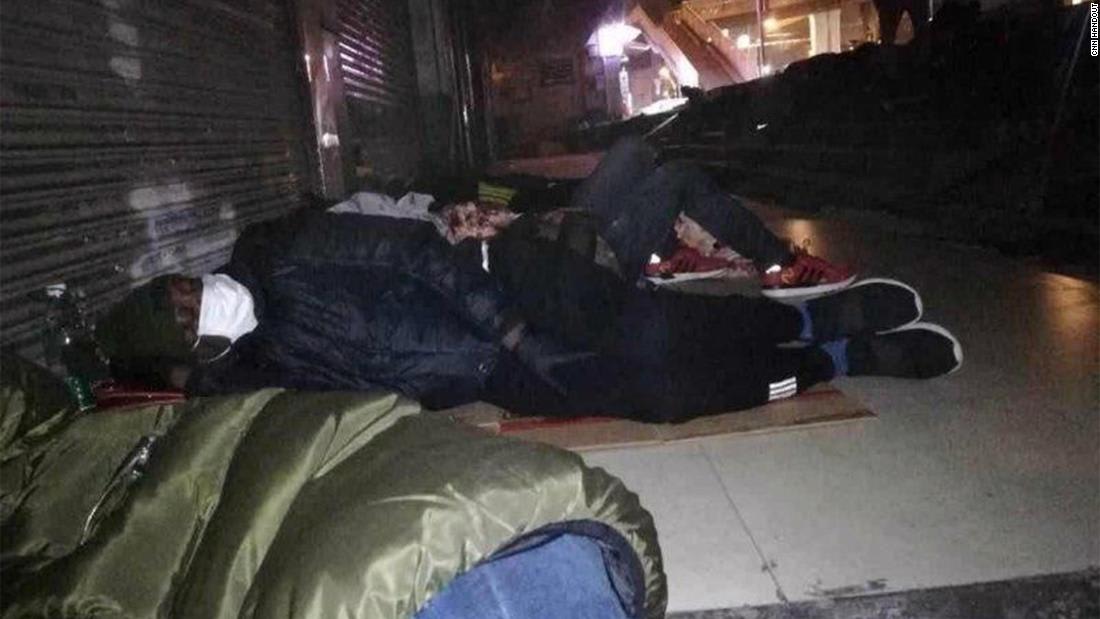 With lockdowns and movement restrictions in place across the world, people are having to find new ways to exercise.

Viki Bell teaches karate in Melbourne, Australia -- but her dojo is closed because of the country's social distancing rules.

Instead she has started teaching classes virtually, with her students practicing the moves in their own homes on the other side of the camera.

Julia Basa has used the same strategy. She teaches Zumba -- a mix of dance, pilates and aerobics -- in Melbourne, but lately has had to hold sessions online from her backyard.

Other places are getting more creative. One neighborhood in the UK town of Frodsham has started doing daily dance and fitness sessions outdoors -- everyone on the road, following a resident instructor, but carefully standing a number of feet apart to adhere to social distancing criteria.

When the beat drops, these health care workers know it's all about the footwork.

Medical professionals across the country are participating in dance challenges on social media. It's helping them share smiles and blow off steam during the demanding coronavirus pandemic.

In scrubs and swag, nurse Kala Baker lip-syncs and dances in TikTok challenges to hits like "Savage" by Meg Thee Stallion at Mercy Hospital in Springfield, Missouri.

Baker says her challenges, which she films after clocking out, help create solidarity with health care professionals across the country -- especially in states hit hardest by coronavirus. She sees it as a way to "bring joy to a really dark place right now."

"I have never felt more connected with health care workers; we all feel like we are all one big team all over the world," she said. "We are trying to do it together." 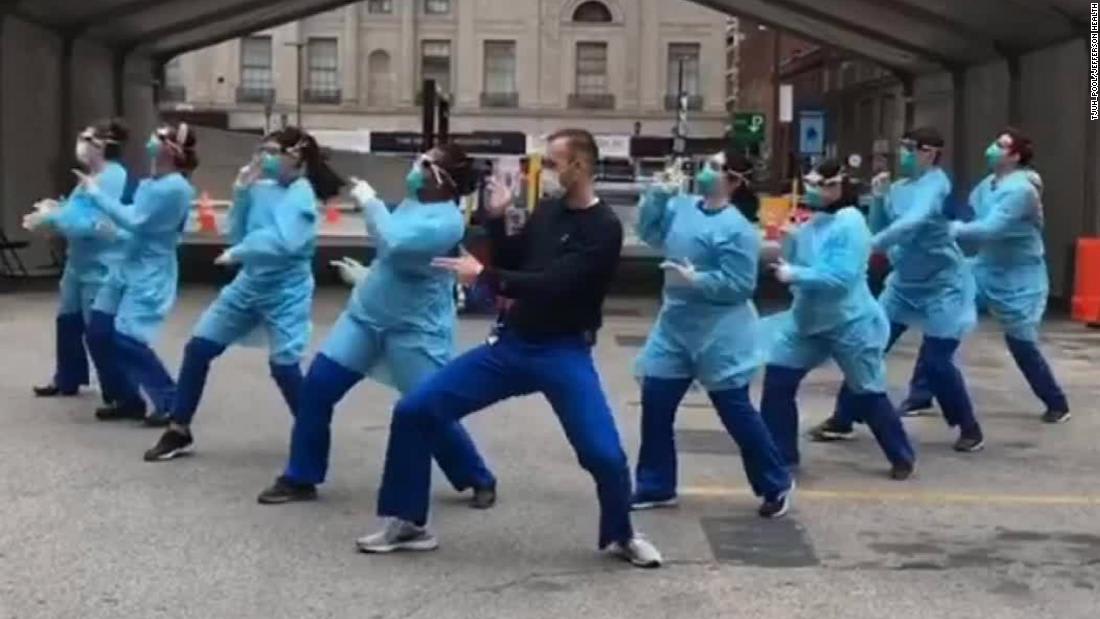 The coronavirus has infected close to 1.7 million people globally, and killed more than 102,000. The US has passed half a million cases, and many other countries are still reporting record numbers of new cases each day.

If you're just joining us, here are the biggest headlines from today:

People in the Czech Republic can now shop at hardware and bicycle stores, play tennis and go swimming. Austria plans to reopen smaller shops after Easter. Denmark will reopen kindergartens and schools from next week if coronavirus cases remain stable, and children in Norway will return to kindergarten a week later.

These nations are among the first in the West to start feeling their way out of the limits on daily life imposed by governments to curb the spread of the coronavirus.

How did they get here?

The countries preparing to ease restrictions had something in common: they were among the first in Europe to implement lockdowns or severe social distancing measures, and rapidly scaled up coronavirus testing, said Dr. Peter Drobac, a global health expert at the Oxford Saïd Business School.

Other countries looking to follow their path and avoid a second wave need to meet three general criteria, he said: 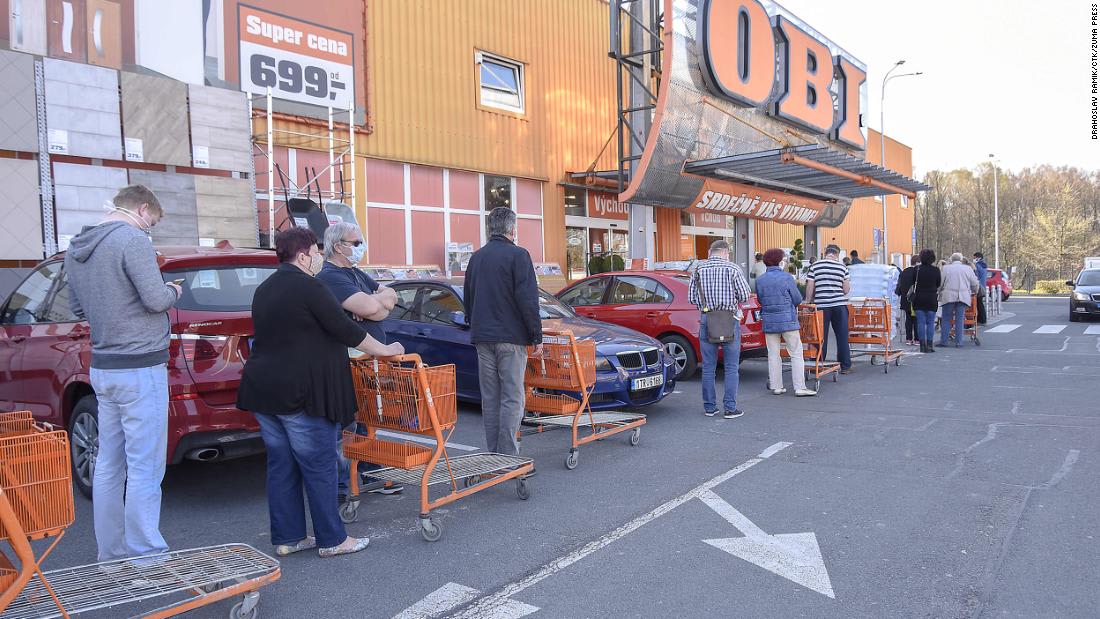 These countries are reopening -- here's how they're doing it

Everyone in the Californian city of Beverly Hills must now wear face coverings whenever they go outside.

The order went into effect late Friday local time, and includes essential workers. Face coverings like a scarf, bandana or cloth are required for all outings, including walks through the neighborhood.

“We believe this action will help to protect and ultimately save lives,” Mayor Lester Friedman said in a statement. “While we continue to ask our community members to remain at home, those who do go outside and the people they encounter will be safer.”

This differs from the Los Angles County mandate announced by Mayor Eric Garcetti on Tuesday, which does not require residents to wear face coverings while alone outside.

As the coronavirus pandemic continues, the situation in early hotspots like China and South Korea is improving as the countries move away from the peak of infection.

However the struggle is intensifying in India and Japan.

The national total is now 7,600 cases and 249 deaths, according to data from Johns Hopkins University.

It was the fourth day in a row that Japan had set a new peak, and took the national total to 6,717 cases and 105 deaths.

Mainland China reported 46 new cases yesterday -- 42 of which were imported from abroad.

There were also three deaths and 34 new asymptomatic cases, which are counted separately from confirmed cases.

The country now has 81,953 cases and 3,339 deaths from the coronavirus, according to the National Health Commission. Of those total cases, 77,525 have recovered and been discharged from the hospital.

South Korea reported 30 new cases yesterday, bringing the national total to 10,450, according to data from the Korea Centers for Disease Control and Prevention and Johns Hopkins University.

Two more crew members on the USNS Mercy hospital ship docked in Los Angeles have tested positive for the coronavirus -- taking the total to three, the US Navy confirmed on Friday.

The ship is being used to treat non-coronavirus patients to help ease the burden on hospitals.

"The Covid-positive crew members are currently isolated off-ship, and will continue to self-monitor," Navy spokesman Andrew Bertucci said.
"The ship is following protocols and taking every precaution to ensure the health and safety of all crew members and patients on board."

The cases will not affect the ability for USNS Mercy to receive patients, Bertucci told CNN.