Citing numbers from the New York metropolitan area, Dr. Anthony Fauci told CNN he has "cautious optimism" the nation may be seeing a decrease in the rate of hospital admissions, patients admitted to intensive care and those needing intubation – resulting in the curve of cases decreasing.

Fauci did say the nation is still seeing some hot spots in various locations.

“If you look at the pattern of the curves in other countries, once you turn that corner, hopefully you’ll see a very sharp decline. And then you start thinking about how we can keep it that way and prevent it from resurging,” Fauci said.

As the President debates when to recommend the guidelines instituted by governors across the nation should be relaxed, Fauci told CNN there has to be a “gradual re-entry” or a “rolling re-entry.”

“You’re trying to balance two things: you wanna make sure you don’t do something prematurely and precipitously, at the same time you pay attention to the need to get back to normal,” he said.

Fauci, the nation’s top infectious expert, added the nation cannot at one time drop the various restrictions put in place or there is an “extraordinary risk” of another major outbreak. He said different parts of the country will have to do it in different ways, partly depending on whether those locations have seen major outbreaks already or are facing future ones.

The top infectious disease doctor in the US says reopening the country will be a gradual process and restrictions will be lifted depending on where you are in the country.

Dr. Anthony Fauci, the director of the National Institute of Allergy and Infectious Diseases, told CNN this is not a "one size fits all" decision.

Fauci said he believes this approach is needed to try to prevent a "rebound" or second wave of coronavirus cases. He said there will be people who do get infected after restrictions are loosened, but by reopening gradually, there will be time to identify those cases and isolate them.

"If you start, and when one starts, to relax some of the restrictions, we know that there will be people who will be getting infected. I mean, that is just reality," Fauci said.

Fauci said "it's so difficult to make those kinds of predictions" regarding when these measures will begin, but he hopes to reassess the situation at the end of April.

"We are hoping that at the end of the month, we can look around and say, okay, is there any element here that we can safely and cautiously start pulling back on? If so, do it. If not, then just continue to hunker down," he said.

Italian Prime Minister Giuseppe Conte says this Easter is like none other because of the coronavirus outbreak.

Conte shared his sympathy to those affected by the crisis in an Easter message on Facebook.

“To those who suffer today, to those who have an empty chair in front of them, to those who struggle in the hospital wards to remove tears and pain from their community,” he said.

“We miss the smiles of relatives, the hugs of friends, the beautiful traditions of our country, the handshakes in the church, in the square, at the bar. The sacrifices that each of us makes on this important Sunday are a gesture of authentic commitment to what really matters and that we will be able to recover soon," Conte added.

He said that while this Easter is different, we will get through this together.

“Today will not be like the other times, and tomorrow won’t be either, when we hold on to what we care about. Together we will do it," Conte said.

Italy has reported more than 19,000 coronavirus deaths, according to a tally from Johns Hopkins University.

“The PM has been discharged from hospital to continue his recovery, at Chequers,” the spokesperson said. “On the advice of his medical team, the PM will not be immediately returning to work. He wishes to thank everybody at St. Thomas’ for the brilliant care he has received."

The spokesperson added: “All of his thoughts are with those affected by this illness.”

Johnson's fiancée, Carrie Symonds, thanked the British National Health Service after a "very dark" week, she said Sunday in a series of tweets following his discharge from the hospital.

Symonds said, "I cannot thank our magnificent NHS enough. The staff at St Thomas’ Hospital have been incredible. I will never, ever be able to repay you and I will never stop thanking you."

Johnson issued a statement Saturday thanking the National Health Service staff at St. Thomas' Hospital following his treatment for coronavirus, saying "I can't thank them enough. I owe them my life," according to the UK Press Association.

This is the first known statement from the Prime Minister since he entered hospital last Sunday night.

Some context: Johnson announced he tested positive for the novel coronavirus on March 27. He said he was experiencing "mild symptoms" and would continue leading the country, while self-isolating in his apartment in Downing Street.

But 10 days later, 10 Downing Street announced the 55-year-old was not getting better and was taken to St. Thomas' Hospital in London. He was moved to an intensive care unit (ICU) the next day after his condition deteriorated.

Johnson spent three nights in intensive care and received "standard oxygen treatment," according to his spokesman, but did not require mechanical or invasive ventilation.

He was moved out of the ICU on Thursday night. On Friday, a spokesperson said the Prime Minister was "able to do short walks" in between periods of rest and waved his thanks to staff.

The Spanish government has stated to loosen some of the toughest restrictions on people’s movements imposed because of the coronavirus pandemic starting this week.

Spain has been one of the hardest-hit countries, with hundreds of new deaths being reported every day and the highest death-rate in the world per million inhabitants.

People who can’t work at home and whose places of employment are reopening may return to work after the Easter holidays. The move is aimed at such sectors as construction and manufacturing – but non-essential retail outlets, bars and places of entertainment must remain closed. Restaurants can only offer take-out. Hairdressers will only be able go to clients’ homes but can’t open their salons and banks will have a minimum service with only a few branches open.

The government announced over the weekend that police would begin handing out 10 million protective masks at metro stations and other transport hubs to workers after the Easter break, while reiterating guidance on social distancing and regular washing of hands.

Prime Minister Pedro Sanchez has cautioned that a return to normal life would be “progressive.”

“We can’t even know what kind of normality we’re returning to,” Sanchez said last week.

“The climb has been difficult, the descent will also be,” Sanchez told Parliament last week as the state of emergency was extended to April 26. Sanchez has warned that it may need to be further extended.

South Korea announced Sunday that the government will form a vaccine development support group this week, which will involve members of government, academia, industry, research institutions and hospitals.

The joint support group will be led by the Ministries of Health and Science to form a quick decision-making system to aid in the development of treatment in South Korea.

Earlier in the week, President Moon Jae-in held a meeting during which he vowed to “provide all the financial, administrative, and policy support” for the development of a vaccine, according to Health Minister Park Neung-hoo.

"If we put their efforts together, we can develop both the vaccine and treatment in the fastest time possible," Park said at a briefing on Sunday. Such cooperation would cut down the time taken for administrative reasons and provide infrastructure or resources needed, Park said.

Race for a vaccine: This week, a study published in The Lancet medical journal warned that coronavirus lockdowns across the globe should not be completely lifted until a vaccine for the disease is found.

China's draconian restrictions on daily life appear to have halted the first wave of Covid-19 across much of the country, but the researchers used mathematical modeling to show that premature lifting of measures could result in a sweeping second wave of infection.

Pope Francis has said the world needs to be united in the face of the coronavirus pandemic, in a special address after Easter mass on Sunday.

“This is not a time for indifference, because the whole world is suffering and needs to be united in facing the pandemic,” the Pope said during his address, known as "Urbi et Orbi" (To the City and the World).

The Pope also called for an “immediate global ceasefire” and an end to weapons manufacturing.

Francis called on international leaders to relax sanctions and reduce or forgive debt for poorer countries.

In light of the present circumstances,” the Pope said, “may international sanctions be relaxed, since these make it difficult for countries on which they have been imposed to provide adequate support to their citizens, and may all nations be put in a position to meet the greatest needs of the moment through the reduction, if not the forgiveness, of the debt burdening the balance sheets of the poorest nations.”

Francis remembered those who are sick and have died due to Covid-19, as well as doctors, nurses and health care workers.

Images and a live streamed video from the Vatican showed an empty St. Peter's square.

The UK is “likely to be one of the worst, if not the worst, affected countries in Europe,” Jeremy Farrar, director of the Wellcome Trust and a UK government adviser said Sunday.

"The numbers in the UK have continued to go up, I do hope that we're coming close to the number of new infections reducing, and in a week or two the number of people of people needing hospital reducing," he said, adding that he hoped the number of UK deaths would plateau and start to fall in a couple of weeks.

Some 9,875 people have died of coronavirus in the UK, and almost 80,000 cases have been confirmed, according to figures from Johns Hopkins University.

He told BBC's Andrew Marr that Germany had so far managed to keep its numbers low by introducing testing at a "remarkable" scale early on and isolating those who had contracted the virus.

Farrar also said a second or third wave of coronavirus was "probably inevitable."

He said he thought a vaccine will be available during autumn this year, but that it will not be available on the scale required to protect people around the world. 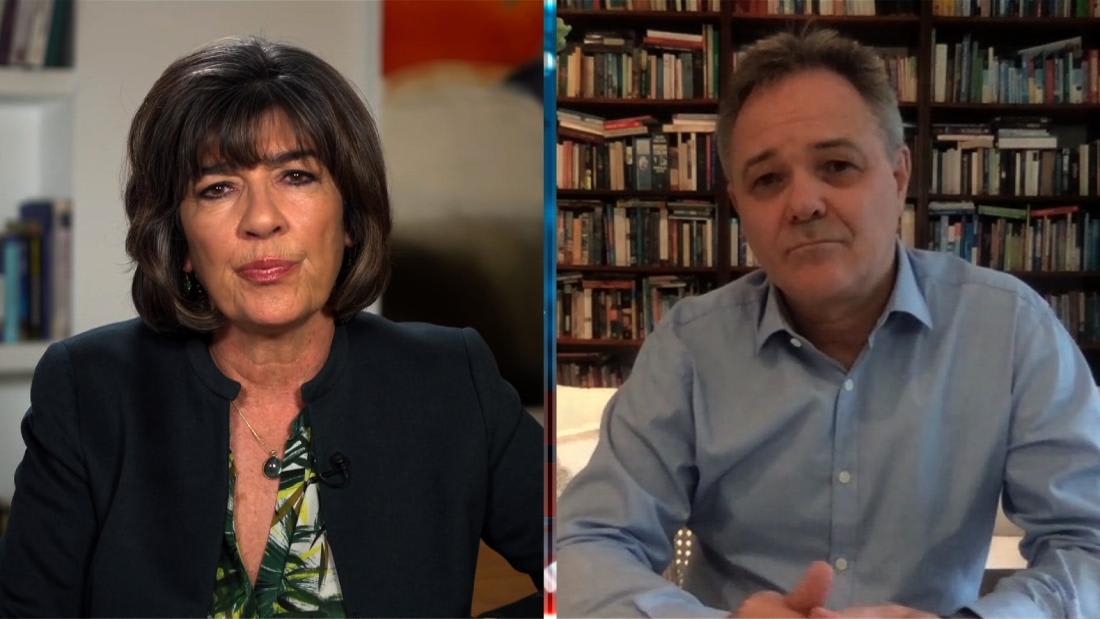 Spain recorded 619 deaths due to coronavirus in the past 24 hours, according to new data from the Spanish Health Ministry on Sunday.

This is the highest daily death toll for the past three days and represents a 3.7% increase. The total number of fatalities stands at 16,972.

Lockdown extended, but restrictions eased: The nationwide lockdown has been extended to almost the end of April, for a total of six weeks. But the government, pointing to a much slower rate of increase in the number of deaths and of new cases, will ease restrictions on Monday for some workers, allowing construction sites and factories to resume activity.