Hong Kong reported no new confirmed cases of novel coronavirus on Monday for the first time in more than six weeks, according to a statement by the city's Centre for Health Protection.

As of Monday, the total number of reported coronavirus cases in Hong Kong remained at 1,025, including four deaths.

Despite that, the CHP is encouraging residents to continue to maintain an appropriate social distance and avoid social activities like meal gatherings to reduce their risks of getting infected.

"Given that the situation of Covid-19 infection remains severe and that there is a continuous increase in the number of cases reported around the world, members of the public are strongly urged to avoid all non-essential travel outside Hong Kong," the CHP added.

Germany started to ease its lockdown restrictions on Monday, allowing businesses and shops to reopen as the country takes small steps back to normalcy.

Shops up to 800 square meters in size can reopen, so long as they have hygiene and social distancing measures in place.

Bookshops, car dealerships and bike stores are also allowed to reopen regardless of their size. In some regions of Germany, zoos are reopening. The reopening of shops and businesses varies from state to state.

This comes after the government last week said the virus in the country was "manageable."

The Robert Koch Institute, Germany's national agency for disease control and prevention, reported Friday that each person infected with Covid-19 is now infecting fewer that one other person on average.

"Imagining that the situation is getting better would be a mistake," the prime minister said at his news conference on Sunday.

Philippe said that France had passed the peak of the epidemic. But the country is not going to return to normal soon because right now there is no vaccine and no treatment, he warned.

France has suspended all non-essential business until May 11.

Philippe said May 11 won’t be the end of the confinement, but a new phase. He said that measures for after May 11 will be announced in a couple of weeks and will be based on three main principles: social distancing, massive testing and isolation of people who have tested positive.

The prime minister indicated that schools won’t be reopening everywhere after May 11 and, in any case, would be operating differently. Authorities were considering options such as telling students to attend class on alternate weeks, or using bigger classrooms than usual.

The prime minister also announced that visits to nursing homes would be reauthorized as of Monday, but would be severely restricted. For example, physical contact would not be allowed, he said.

If you're just joining us, here's the main news to break since our last catch-up.

A kangaroo was spotted bouncing through an almost deserted South Australian city on Sunday amid the coronavirus lockdown, according to police.

With much of the country being told to stay at home, Adelaide -- a coastal city of more than 1.2 million people -- has become a much more attractive place for the country's iconic animal to hang out.

The kangaroo was caught on CCTV camera on Sunday morning. Officers watching the footage just happened to see the marsupial bouncing down the nearly empty streets, a South Australian police spokesperson told CNN.

Every now and then, kangaroos are spotted in Adelaide's suburbs, but it's not usual to see them bouncing down the central city streets, the spokesperson said.

"It was quite unique," the spokesperson said, adding that it was likely the quiet of the coronavirus lockdown that had drawn the kangaroo to the city.

Singapore has preliminary confirmed 1,426 new coronavirus cases as of midday on Monday, according to the country's Ministry of Health.

The vast majority of new cases are work permit holders residing in foreign worker dormitories, the ministry said in a statement.

Only 16 cases are Singaporeans or permanent residents.

Hospital leaders in the United Kingdom have criticized the government for making announcements about personal protective equipment supplies that cannot be delivered amid “critically low” stocks in some health trusts.

NHS Providers, which represents hospital trusts and ambulance services, says health workers need certainty about what they can expect.

“Bitter experience over the last few weeks has shown that until a consignment of gowns has landed, the boxes have been checked and the equipment tested, the NHS can’t count on the gowns being available for use at the front line,” NHS Providers chief executive Chris Hopson said.
“Given the current uncertainties over gown manufacture and supply, due to global shortages, we suggest that any future announcements on what gowns might be available for delivery, when, just focus on what we can be certain of.”

The NHS Confederation, which also represents hospital trusts and other NHS services, says the government’s announcements are making the situation worse.

“It would have been better had the government not made the announcement in the first place -- we know shipments in this supply chain are unreliable and even when they do arrive they are not always what is expected. In future the NHS will expect announcements when supplies have arrived not promises about what may or may not be delivered,” NHS Confederation chief executive Niall Dickson said.
"It now looks more likely that supplies of fluid repellent gowns could run out in some places but everything that can be done will be done to protect patients and staff.”

The UK government has faced intense criticism for its response to the coronavirus crisis, including the current shortage of PPE in hospitals.

Culture Secretary Oliver Dowden told Sky News on Monday that the government is “working around the clock” to deal with the issue, including delivery of a plane load of supplies that are stuck in Turkey.

“Of course we would have wanted this flight from Turkey to take off yesterday. There’s been logistical challenges at the Turkish end, but we’re confident it will take off later today,” Dowden said.

The UK has reported more than 121,000 coronavirus cases, including 16,095 deaths, according to Johns Hopkins University.

While millions of people around the world are cutting their own hair and inventing new recipes amid the Covid-19 pandemic, thousands of the world's commercial airplanes are also getting much-needed rest.

Qantas has shared a video revealing how its planes are being maintained and cared for while grounded during Australia's lockdown measures.

John Walker, the airline's Melbourne-based Head of Line and Intermediate Maintenance Operations, shared that the planes are getting plenty of TLC while they sit in hangars waiting for global travel to resume.

"When you park an airplane, it's not just like parking a car," Walker explains. "You don't just switch it off and lock the doors."

The planes are towed periodically around so that their wheels can rotate, and service members clean the inside and outside of the aircraft. Depending on the model of the plane, its engine must be turned on either every 15 or 30 days, and the cockpit window is covered in tinfoil so the front of the aircraft won't get too hot. 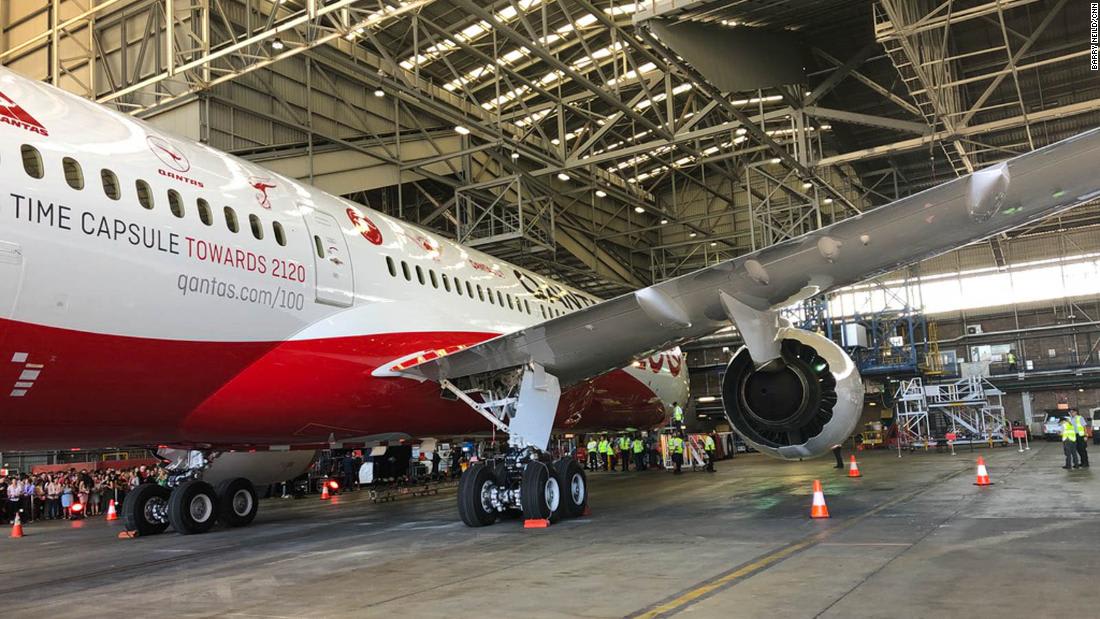 For weeks, Sydney's beach lovers have had to stay away from the sand and surf.

But starting Monday, some beaches in the city's eastern suburbs will be open for "exercise purposes only," according to the local authorities.

Three weeks ago, all Randwick City beaches were closed to discourage large groups congregating at the beach.

"Living along the coast, I know how important our beaches are to the mental and physical health of so many in the community," said Mayor Danny Said.
"The past three weeks have been difficult as we’ve all had to make changes and sacrifices to our daily routines."

Not back to normal: Even though beachgoers are allowed back, they must maintain a distance of 1.5 meters (4.9 feet) between each other, limit groups to two people and move on once they have completed their exercise. Sitting or sun-bathing on the sand will not be permitted, the council said in a news release.