Germany reported 1,785 new coronavirus infections today -- a relatively low number compared to just a week or two ago when new daily cases were double that figure.

The country also reported 194 deaths today. That raises its total to 143,457 reported cases and 4,598 deaths, according to the Robert Koch Institute, Germany's center for disease control and prevention.

Around 3,700 more patients have recovered from Covid-19, according to the Robert Koch Institute. The government has emphasized the importance of keeping the number of recovered patients higher than the number of new infections.

Oktoberfest is canceled: Germany's iconic Oktoberfest event -- the world's largest beer festival -- will be canceled this year due to the pandemic, Bavarian Minister-President Markus Soeder said.

The annual festival, which usually runs for more than two weeks in September through the first Sunday in October, celebrates traditional German food, dancing, beer and clothing. Every year, attendees flock from around the world to Munich, capital of the southeastern state of Bavaria.

The novel coronavirus has now infected more than 2.47 million people and killed at least 170,000 worldwide, according to Johns Hopkins University.

The crisis is starting to abate in parts of Asia, such as Hong Kong, but continues to ramp up in the United States and other regions of the world. If you're just joining us, here's the latest:

Trump says he'll freeze immigration: The US President tweeted that he would sign an executive order temporarily suspending all immigration into the country. The White House declined to provide further information and the Department of Homeland Security didn't respond to a request for comment. It's not clear what mechanism Trump will use to suspend immigration, how long such a suspension could last or what effect this will have on the operation of US border crossings and on those who already hold green cards.

UK PPE: Government minister Simon Clarke said the country will not run out of personal protective equipment, but conceded the “margins can be tight." This comes after hospital chiefs around Britain warned that some stocks of PPE are "critically low."

Indian reporters infected: More than 50 journalists have tested positive for coronavirus in the Indian financial capital, Mumbai. They were covering the pandemic, leading press associations to call for greater protections for the media.

Oil recovers: After the oil market crashed yesterday in the worst day on record, US oil prices are back in positive territory to trade at $1.65 a barrel. The pandemic has caused oil demand to drop so rapidly that the world is running out of room to store barrels. At the same time, Russia and Saudi Arabia flooded the world with excess supply.

Pakistan spikes: Pakistan reported 796 new cases in the past day, marking the country's biggest single-day jump in cases so far.

Hong Kong stays cautious: The semi-autonomous Chinese city reported no new cases yesterday, raising hopes that the second wave seen in March could be over. But authorities are taking no chances, and extended social distancing rules for 14 more days.

Jack Ma steps in: The founder of Alibaba and one of China's richest men is donating millions of face masks and test kits to the World Health Organization to help fight the pandemic, he announced on social media.

Strongman leaders around the world are using the coronavirus crisis to stifle journalists, a leading press freedom watchdog has warned, as it bemoaned a missed opportunity to highlight the severity of the outbreak in its early days in Wuhan, China.

Reporters Without Borders (RSF) criticized China for censoring early coverage of the coronavirus outbreak, telling CNN Business that the global pandemic could have been averted or lessened had journalists had more freedom in the country.

It also condemned Hungarian President Viktor Orbán for securing sweeping new powers to punish journalists in the wake of the crisis, and singled out US President Donald Trump and Brazil's Jair Bolsonaro for their attempts to "denigrate the media and encourage hatred of journalists" in their respective countries.

"If there had been a free press in China, if these whistleblowers hadn't been silenced, then this could have been prevented from turning into a pandemic," RSF's UK bureau director Rebecca Vincent told CNN Business, as the group unveiled its annual assessment of media liberty in 180 countries.

"Sometimes we can talk about press freedom in a theoretical way, but this shows the impact can at times be physical. It can affect all of our health," she said.

Early censorship: Chinese officials downplayed the severity of the virus in its early weeks, while police targeted "rumormongers" and censors deleted any commentary that questioned the official line.

Wuhan's mayor Zhou Xianwang later said he understood the public was "unsatisfied with our information disclosure."

"Reporting the truth at the earliest possible moment would have allowed the rest of the world to react probably earlier and probably more seriously," Vincent said. "The consequences (of stifling media freedom) are actually deadly." 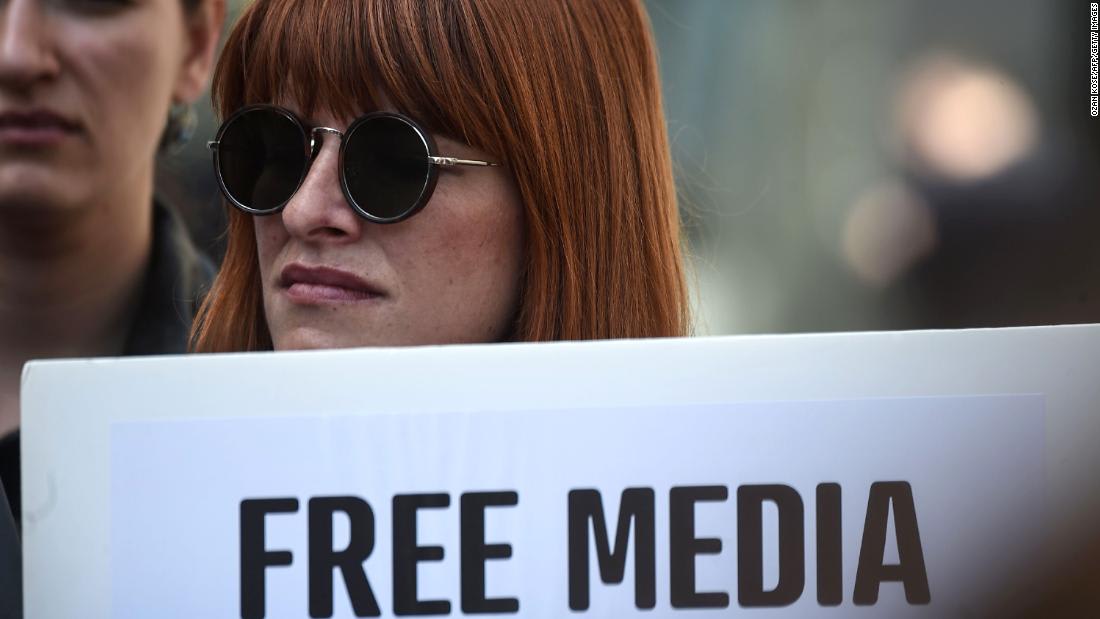 A free press in China could have prevented the coronavirus pandemic, media watchdog says

UK government minister Simon Clarke said the country will not run out of personal protective equipment, but concedes the “margins can be tight."

This comes after hospital chiefs around the country warn that some stocks of PPE are "critically low."

Clarke said on a Sky News segment that the government was doing everything it could to supply PPE where it’s needed.

“We’re not going to run out. We’re making sure it gets to the front line. We recognize that the margins can be tight. But we are confident that we can keep supplying everybody with what they need,” he told Sky News.

Clarke added that the government had sent planes to collect shipments of PPE from Turkey, and that it had also received 140,000 medical gowns from Myanmar.

Mandy Thorn, vice chair of the National Care Association, warned that while the situation has improved in recent days, there are still issues with accessing affordable PPE.

The coronavirus pandemic has put a damper on many activities, including Hong Kong's anti-government protests.

But anger in the city has not gone away, nor has the protest movement gone completely dormant, even as restrictions on gatherings and a desire to avoid infection has put a temporary halt to the kind of mass demonstrations seen in 2019.

Just as the extradition bill which sparked last year's protests gave a shot in the arm to a movement that was looking all but defeated, recent moves by Beijing and the Hong Kong police have also reinvigorated opposition in the city.

Covid crisis eases: This comes as the city begins to consider relaxing coronavirus restrictions, with local cases dwindling to just a handful per day.

While there have been small, sporadic protests throughout winter and into spring, even with the pandemic concerns, a major rally on July 1 could be the first major test of the protest movement's ongoing public support this year.

July 1, the date of Hong Kong's 1997 handover from British rule to China, has traditionally been a day of protest, with tens of thousands taking to the streets every year.

A strong turnout this year, in defiance of both the government and the virus, could be a sign that Hong Kong is in for another summer of discontent. 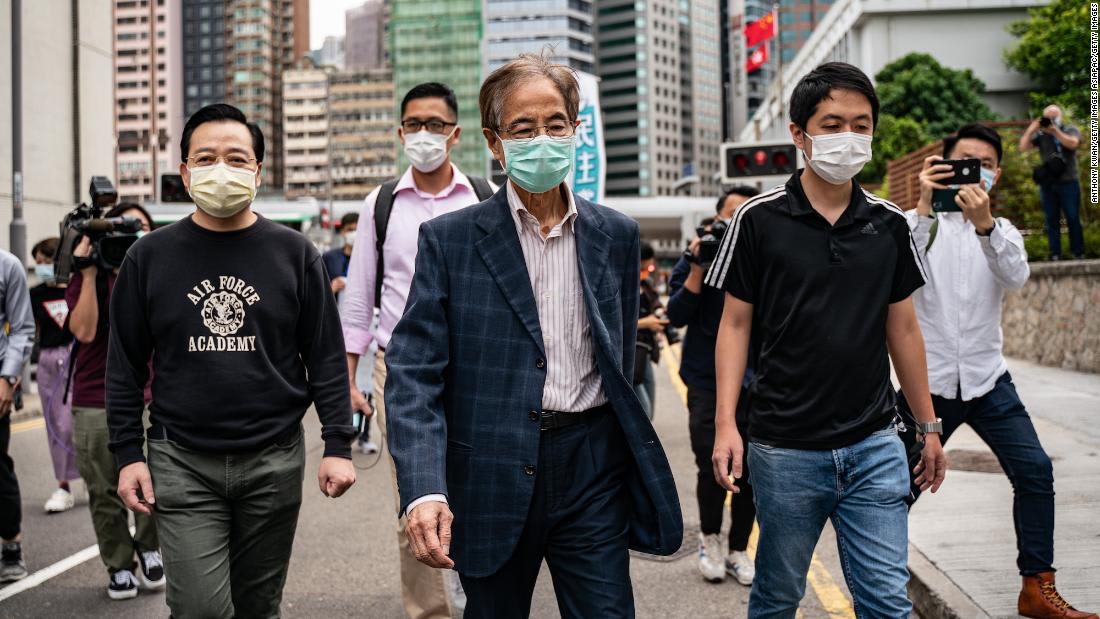 As coronavirus crisis starts to pass, Hong Kong may be set for another summer of discontent

US oil prices are back in positive territory on Tuesday after a stunning collapse Monday that saw levels crash below zero, trading at the lowest level since NYMEX opened futures trading in 1983.

US oil futures popped more than 100% -- albeit to trade at just $1.65 a barrel. The May contract for West Texas International, which expires Tuesday, finished regular trading Monday at -$37.63 a barrel.

The June contract, which is now being traded more actively, rose 4.5% to $21.35 a barrel during Asian trading hours, still a troublesomely low number.

The coronavirus pandemic has caused oil demand to drop so rapidly that the world is running out of room to store barrels. At the same time, Russia and Saudi Arabia flooded the world with excess supply. Analysts also attributed Monday's plunge to frantic last minute trading because of the quickly expiring May contract.

"Regardless of what OPEC does, there will be structural demand loss for oil due to less travel," wrote Stephen Innes chief global markets strategist at AxiCorp in a Tuesday research note.
"At a minimum, oil prices will be the last asset class to recover from lockdown."

Futures for Brent crude, the global benchmark, moved slightly lower to $25.39 a barrel on Tuesday.

Japan has refuted a statement by the International Olympic Committee that it will share the costs of delaying the 2020 Olympic Games.

Speaking to reporters on Tuesday, Japanese Chief Cabinet Secretary Yoshihide Suga said Japan had not reached an agreement with the IOC on addressing the additional costs resulting from the delay, and that discussions were ongoing.

"The IOC and Japan-side have agreed that the handling of the situation including the costs from the delay is a shared task, and that both sides will assess and discuss together," he said.

Earlier, the IOC had published a statement on its website saying that Japanese Prime Minister Shinzo Abe had agreed to shoulder the costs of delaying the Olympics under existing agreements.

Abe and IOC president Thomas Bach agreed on March 24 to postpone the Olympics until 2021 following weeks of mounting pressure to delay the Games amid the coronavirus pandemic.

A total of 53 journalists tested positive for Covid-19 last week in in Mumbai, India, according to the local council body Brihanmumbai Municipal Corporation.

BMC said it had tested 167 journalists in the city who were reporting on the crisis. Those who tested positive are now in isolation.

"It is shocking that more than 50 journalists of electronic media, particularly camera persons, have been found corona positive in Mumbai. Every journalist should take proper care," tweeted senior cabinet minister Prakash Javadekar yesterday.

"As can be seen the pandemic shows no signs of dying away, and journalists are forced to continue to work to provide news and information to the public. While some of us have the privilege of working from home, many journalists have still to venture out in hazardous zones and common spaces, and require immediate protection," said the letter.

Maharashtra state, of which Mumbai is the capital, has recorded the highest number of cases in India. At least 4,666 people have tested positive in the state and 232 have died.

Pakistan reported 796 new coronavirus infections in the country's highest single-day jump in cases during the epidemic, according to the health ministry.

The South Asian country has recorded 9,216 cases and 192 deaths, according to Johns Hopkins University.

According to data available on the health ministry's website, the average number of tests per day in Pakistan since April 15 was at 6,000, a number which the ministry has announced is due to increase.