Georgia Gov. Brian Kemp said on Monday that certain businesses in the US state could reopen as soon as Friday -- catching local mayors and officials off guard.

The mayors of Albany and Augusta, both Georgia cities, told CNN they were surprised by Kemp's announcement.

"We were all caught off guard quite frankly surprised that the governor moved as swiftly as he did to open the state back up," Augusta Mayor Hardie Davis Jr. said.

State Rep. CaMia Hopson from Albany also criticized the move, saying reopening "may be beneficial to our economy but is in no way beneficial to the health of our city."

"I’ve already heard from several health care workers who have worked tirelessly, risking their lives to care for those who have been impacted by Covid-19, feel that this is a slap in their faces," she said.

Hopson added that the city doesn't have the capacity to support a potential surge in cases if the reopening causes further infections -- and she believes a statewide shelter-in-place order should continue for several more weeks.

"We appreciate all of the support that the state has provided us during this crisis; however, we cannot safely get people back to work without making sure people in Albany, Georgia, especially our health providers, can stay safe.”

Park staff in Tampa, Florida, were patrolling closed parks when they noticed someone working out in a park downtown.

It was NFL star Tom Brady, said Tampa Mayor Jane Castor in a briefing on Monday.

"Now, I always tell people, I’m not one to gossip so you didn’t hear this from me," she said.

"But you know our parks are closed down and so a lot of our parks staff, they patrol around just to make sure that people aren’t doing contact sports and things like that, and saw an individual working out in one of our downtown parks. And she went over to tell him that it was closed, and it was Tom Brady."

Brady was given a citation for being in the park, she added.

The 42-year-old is widely considered the greatest quarterback of all time, spending almost his entire NFL career -- 20 seasons -- with the New England Patriots, winning six of the nine Super Bowls he reached.

He is now the quarterback for the Tampa Bay Buccaneers, after signing a multi-year contract with the NFL team in March.

US President Donald Trump made several false claims at his White House coronavirus briefing on Monday. Here's a fact check on what he said:

Trump said people were talking about the need for more coronavirus testing because they want to damage him politically. Asked why he sees the bipartisan outcry over testing as a personal attack, Trump said, "It's not bipartisan. It's mostly partisan."

Fact check: Concerns about testing are indeed bipartisan. The Republican governors of Ohio, Nebraska, Maryland and Massachusetts, as well as Republican Congress members, have all spoken out about the need for more testing.

Trump said he hadn't "left the White House in months" except to send off the USNS Comfort, a hospital ship sent from Virginia to aid New York.

Fact check: Trump held five campaign rallies in February and one on March 2. He left the White House on several occasions in March.

Trump said the US used to have a $500 billion trade deficit with China, citing this figure as evidence of how he believes the US has been taken advantage of economically under previous administrations. Trump claimed before he took office, China "came in and they took $500 billion a year for many years, anywhere from $200 (billion) to $550 billion a year out of our hides." 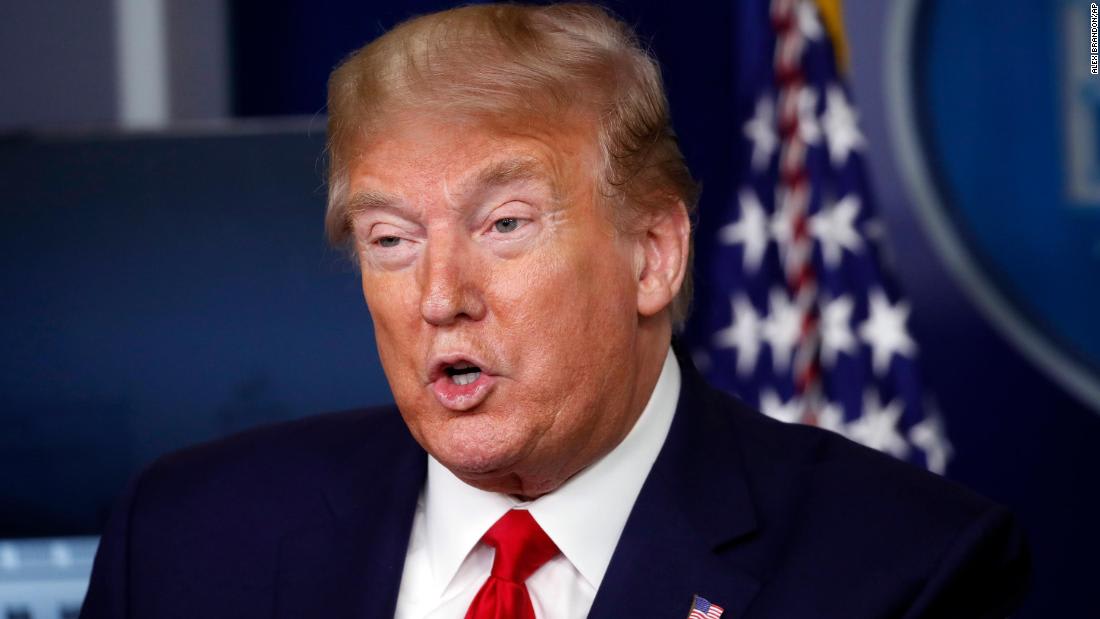 Alibaba founder Jack Ma, the billionaire who helped usher e-commerce into China, announced today that he is donating millions of masks and test kits to the World Health Organization.

In a post on Chinese social media platform Weibo, Ma said he and Alibaba would donate 100 million clinical masks, 1 million N-95 masks, and 1 million test kits to the WHO. "One world, one fight," the post read.

This isn't the first coronavirus aid that Ma and Alibaba have supplied:

Who is Jack Ma? Ma is China's most famous entrepreneur and -- with a fortune of nearly $40 billion -- one of the country's richest people.

After two decades building Alibaba into a $460 billion e-commerce business, Ma retired from the role of executive chairman and pivoted full-time to philanthropy.

He started the Jack Ma Foundation in 2014, and has cited the Bill and Melinda Gates Foundation as an inspiration for his charitable endeavors.

People living under coronavirus lockdown measures are adapting as best they can -- but six foreign tourists took an unusual approach by hiding out in a cave in India.

The group lived in a cave near Rishikesh, a town in Uttarakhand state in northern India made famous by The Beatles, for nearly a month before they were found and quarantined by the police on Sunday, according to a police official.

The tourists -- four men and two women from France, Turkey, Ukraine, the US and Nepal -- were initially staying at a hotel, but ran out of money and took refuge in the cave, said Mukesh Chand, spokesperson for Uttarakhand police.

"They had been living in the cave since March 24, the police found them on Sunday and moved them to Swarg Ashram near Rishikesh, we have asked them to self-quarantine for two weeks as a precaution but the group seemed healthy," Chand told CNN.

The group were rationing their remaining money to buy food and other items, he added. 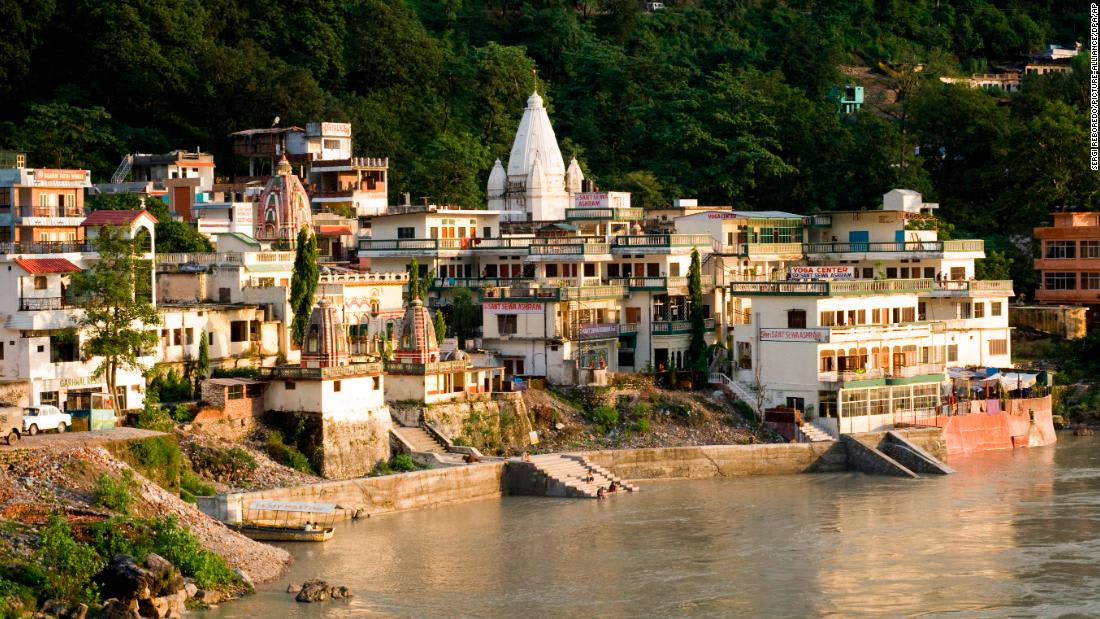 Comprehending the toll the coronavirus has taken is complicated. The following numbers may help you make sense of it. 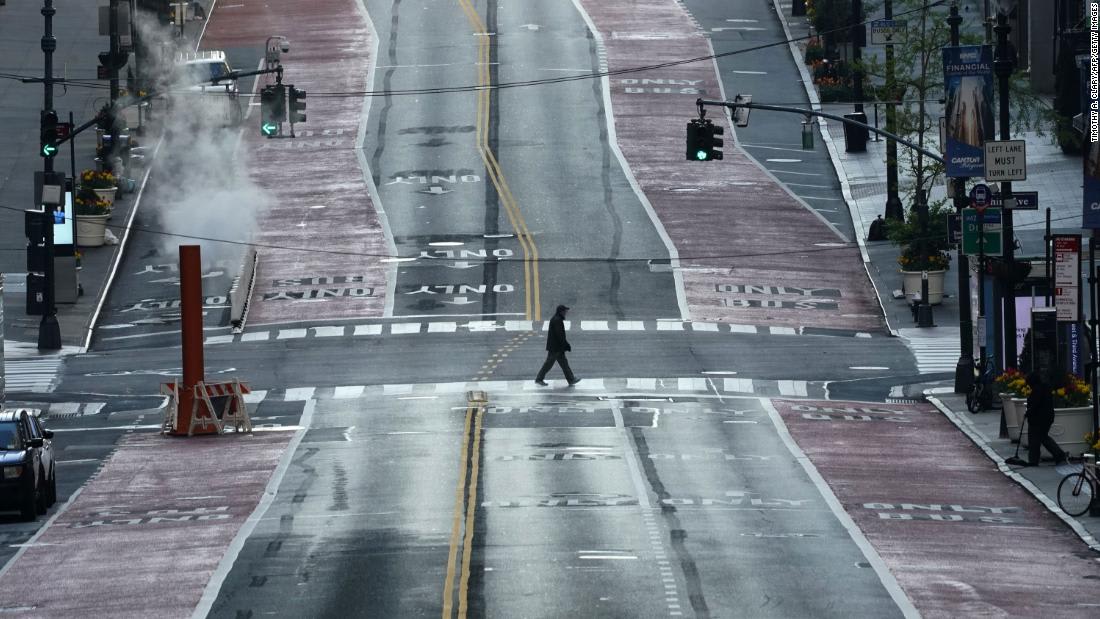 Here's the devastating impact of the coronavirus pandemic

The scene in front of the Pennsylvania statehouse Monday was anything but social distanced.

Hundreds of protesters gathered on the steps of the Capitol building in Harrisburg as police barricades blocked people from advancing closer to the doors. One green rig with the words "Jesus is my vaccine" spray-painted above its front fender drove down 3rd Street, its horn blaring in support.

The demonstrators defied Pennsylvania's statewide stay-at-home orders, calling for a swift end to the government-imposed closures of regular business and for America to "open up."

Similar events have taken place in state capitals across the country, including in Michigan, Texas, Maryland, and Washington, with upcoming protests in additional states.

The organizers have an ally in US President Donald Trump, who over the weekend defended the protesters as "good people" and called on citizens to "LIBERATE" their states. He has also been talking about reopening the American economy for weeks.

The gatherings represent the efforts of a patchwork of conservative groups and individuals. Much of the organizing is done within Facebook groups, including several connected to right-wing activists that have organizational footprints in Ohio, Pennsylvania, Minnesota, Iowa, Missouri and other states. At least one rally saw Confederate flags on display.

Yet as word of the anti-quarantine protests has gained traction on talk radio and in other conservative media, more mainstream conservative figures and groups have glommed on to the phenomenon, amplifying the demonstrations and lending organizational support to existing events. 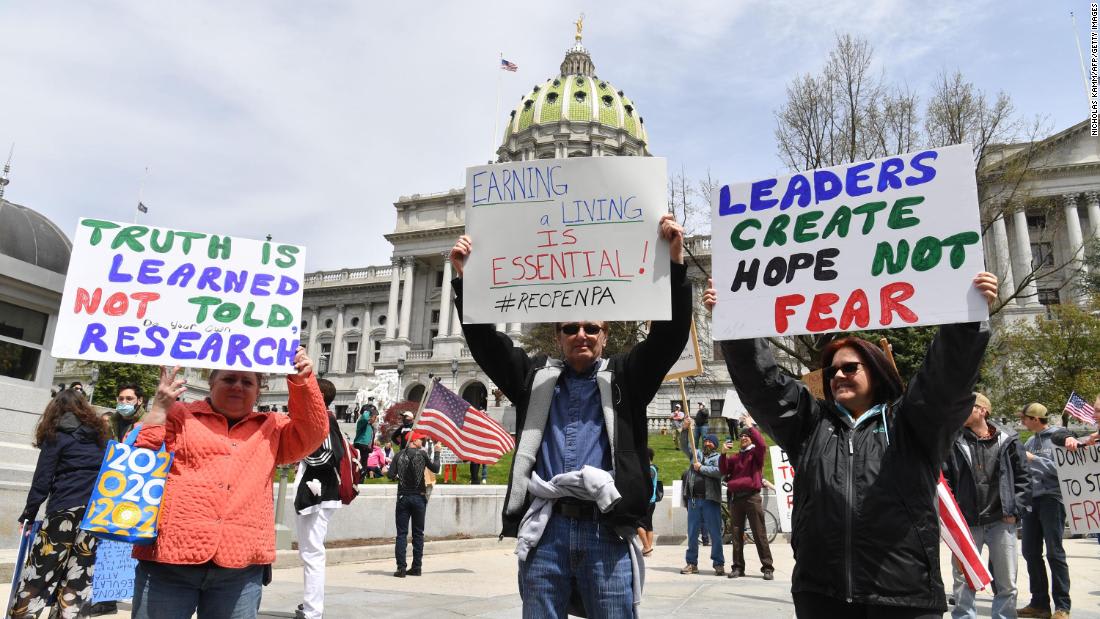 US President Donald Trump said late Monday night that he will sign an executive order temporarily suspending immigration to the US, as the nation battles the health and economic effects of the coronavirus pandemic.

He added that the measure was done "in light of the attack from the invisible enemy," or the coronavirus pandemic, and to protect US jobs.

It's unclear what mechanism Trump will use to suspend immigration and it is also unclear how long such a suspension could last.

CNN has reached out to the White House to find out what the President means, and what effect this will have on the operation of US border crossings, and on those who already hold green cards.

The coronavirus pandemic has brought the world to a halt, as countries scramble to contain its impact on health and the economy.