From Monday next week, wearing a face mask on public transportation and in stores will be mandatory in all 16 states in Germany.

Over the past few weeks, German Chancellor Angela Merkel has advocated that people wear masks.

Last week, the federal state of Saxony in the east of the country pushed ahead, making wearing of masks compulsory to curb the spread of coronavirus.

Since then, more and more state leaders have implemented the wearing of masks in their states. Bremen became the last federal region to support the initiative and its senate is set to approve the decision on Friday.

Germany has reported more than 150,000 coronavirus infections, according to Johns Hopkins University. The death toll has risen to 5,094, the country’s center for disease control, the Robert Koch Institute said on Thursday.

For years, northern India -- especially the capital New Delhi -- has been battling air pollution with levels hitting the hazardous mark during the winter season.

Now, during a nationwide coronavirus lockdown, air pollution in the region has dropped to a 20-year low, according to data published by NASA.

In a series of maps, NASA plotted the aerosol levels in northern India during the same six-day period of March 31 to April 5 from 2016 to 2020.

"We knew we would see changes in atmospheric composition in many places during the lockdown," said Pawan Gupta, a Universities Space Research Association scientist at NASA’s Marshall Space Flight Center in Huntsville, Alabama. "But I have never seen aerosol values so low in the Indo-Gangetic Plain at this time of year."

The Indo-Gangetic Plain stretches across the north of India.

The report tracks the aerosol optical depth (AOD), which is the measure of how light is absorbed or reflected by airborne particles as it travels through the atmosphere.

According to the report: "AOD levels in northern India at the beginning of April were significantly below the norm for this time of year and the lowest in 20 years of MODIS observations. Ground observation stations in India have also reported a decrease in particle pollution in the region”.

MODIS is an instrument used to monitor large-scale changes, such as what proportion of the earth's surface is covered by clouds each day.

The drop in pollution levels comes as India enters its fifth week of lockdown. On March 25, the Indian government imposed a strict nationwide lockdown halting all construction activities, public transport and industry.

India isn't the only place to see cleaner air. Lockdowns restricting travel and industry imposed to halt the spread of coronavirus have resulted in unprecedented reductions in deadly air pollution around the world, new analysis shows. 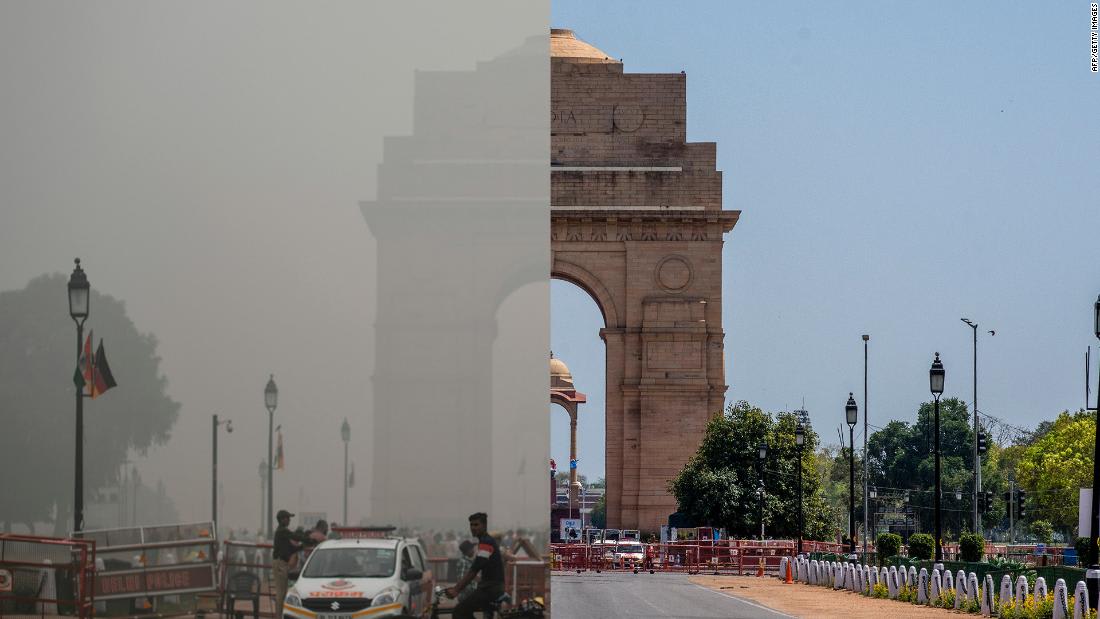 Germany’s coronavirus death toll has risen to 5,094, the country’s center for disease control, the Robert Koch Institute, said on Thursday. That’s an increase of 215 deaths in the past 24 hours.

Meanwhile, the number of new infections remains relatively moderate, with 2,352 cases recorded in 24 hours. Around 3,800 additional patients have recovered from the disease.

German Chancellor Angela Merkel is set to address the German parliament on her government’s response to the pandemic on Thursday morning local time.

Germany has reported more than 150,000 coronavirus infections, according to Johns Hopkins University.

At least three inmates in India have had their prison sentences suspended due to the coronavirus pandemic. But instead of lodging attendance at the police station in person, they will check in with their investigating officers over WhatsApp.

According to Delhi High Court orders issued this week, the convicts in three separate cases will need to check in with their investigating officers via WhatsApp video call and send proof of location via Google Maps if the video call cannot take place.

Once the interim suspension period is over, the convicts must surrender before the concerned jail superintendent, according to the order.

India has been in a nationwide lockdown which started at midnight on March 25. It was set to end on April 14 but was extended to May 3.

That brings the total number of reported infections in the country to 12,631, including 712 cases linked to the the Diamond Princess cruise ship.

The total death toll is now 300, including 13 fatalities related to the ship.

The background: In the past few weeks, Japan's coronavirus cases have spiked -- dashing hopes that the government's initial virus response had succeeded in controlling its spread.

Last week, a team of government experts warned the country could see more than 400,000 coronavirus-related deaths if measures such as social distancing are not taken. Most deaths, they warned, could result from a lack of ventilators.

Read more about the situation in Japan: 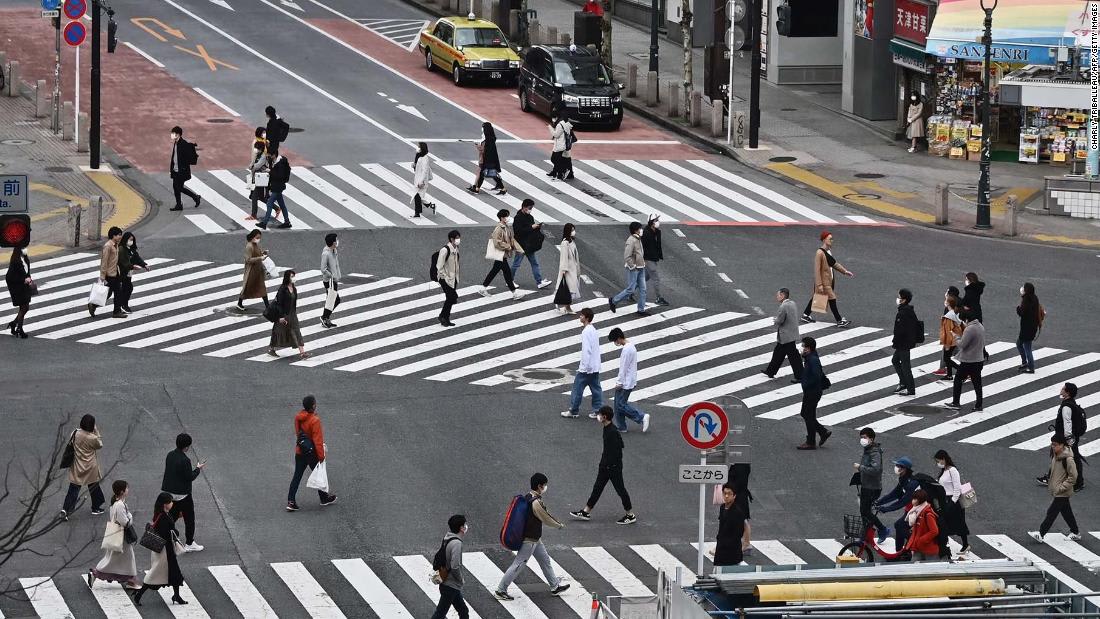 Alarming new signs are emerging that the Trump administration is shunting science aside in the battle against coronavirus.

In Wednesday's most stunning development, a top administration official working on a vaccine claimed he was ousted after resisting efforts to push unproven drugs promoted by US President Donald Trump and his conservative media cheerleaders as "game changer" treatments.

That news was followed by a bewilderingly inconsistent White House briefing. Conflicting messages on when to reboot the economy, the need for testing and the possibility of a resurgence of the virus combined with Trump's effort to suppress facts that jar with his insistence that the end of a nightmare likely to last many more months is near.

In another bizarre twist, Trump produced Robert Redfield, director of the US Centers for Disease Control and Prevention, to walk back his remarks that the coronavirus challenge could be more difficult in the fall.

Trump claimed that Redfield had been "totally misquoted" by the media. But under questioning from reporters, Redfield confirmed that he had in fact made the remarks that angered Trump.

"I'm accurately quoted in The Washington Post," Redfield conceded, as Trump countered that the headline was wrong.

It accurately described Redfield warning that if a coronavirus resurgence came at the same time as the flu season, hospitals could be overwhelmed.

The President also openly clashed with his top public health officials on the likelihood of the virus returning for another assault in the fall -- saying only "embers" of disease were likely that could be easily put out. 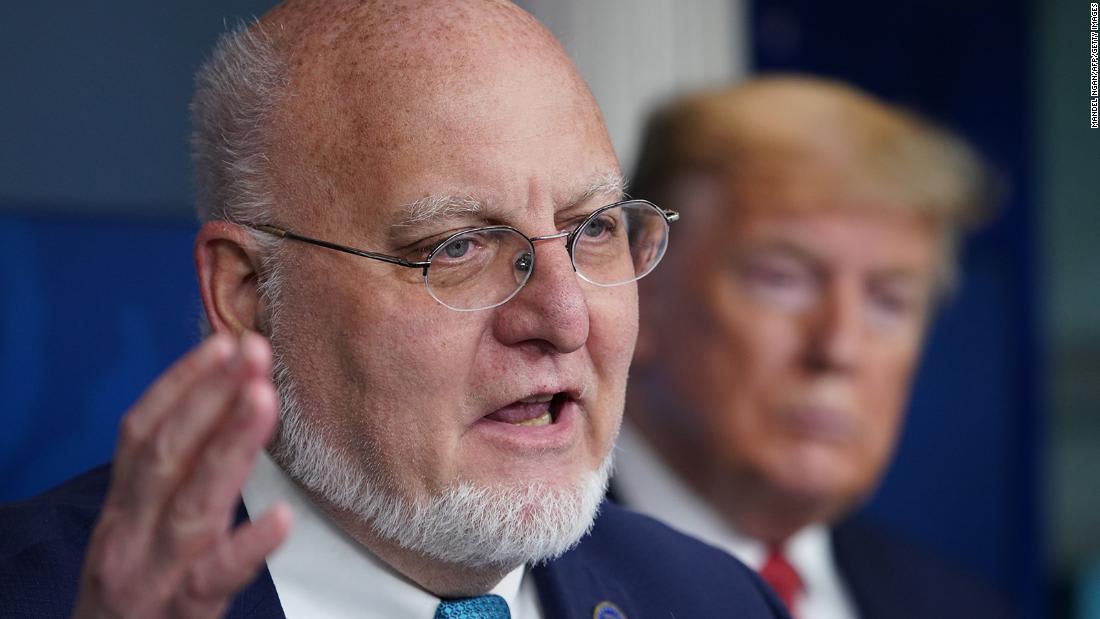 Shocking photos show seven bodies in the open back of a pick-up truck in Philadelphia, which were transported from a local hospital to the medical examiner’s office Sunday.

The Philadelphia Department of Health confirms the incident and the number of bodies in the truck. “The transportation of the bodies in that manner is a breach of protocol,” said James Garrow, spokesman for the Department of Public Health.

"The Medical Examiner’s Office regularly works with hospitals throughout Philadelphia to ensure that bodies are treated with the utmost dignity and respect," Garrow told CNN on behalf of the Medical Examiner's Office. "The Health Department is appalled that this happened, and strongly reminded the referring hospital of the existing protocols. This is not normal or acceptable."

More than 10,000 coronavirus cases, including at least 394 deaths, have been recorded in Philadelphia, according to Johns Hopkins University. The cause of death of the bodies in the photos is unknown.

The bodies were being transported from Einstein Medical Center Philadelphia to an overflow storage area, according to a spokesman from the hospital. The cause of death of the deceased is not known at this time.

The photos, taken by the Philadelphia Inquirer, show bodies stacked in the flatbed of a pick-up truck outside of the Philadelphia Medical Examiner's Office overflow storage area. In one of the pictures, individuals wearing masks are moving a body to the edge of the flatbed where a gurney waits to transport the body. DOH spokesman Garrow confirmed that these pictures are, to the best of his knowledge, of the incident.

"Upon learning of this incident, Einstein immediately launched an investigation to understand all the details related to this matter," a spokesman for Albert Einstein Healthcare Network, told CNN. "As a result of that investigation, we swiftly ended our contract with the funeral home responsible for this occurrence."

The spokesman did not name the funeral home that Einstein says is responsible for the transportation of the bodies, but confirmed they did question Einstein employees as well as their contacts from the funeral home and the Medical Examiner’s office.

"We are equally appalled by these photographs and as a hospital in the epicenter of the Covid-19 pandemic in Philadelphia, we understand these unprecedented healthcare challenges, and all patients should be treated with respect and dignity at every stage and this should never happen," said the Einstein spokesman, adding that the individuals depicted in the Philadelphia Inquirer's pictures are not Einstein employees.

The City of Philadelphia is not investigating this incident as the protocol on the transfer of bodies is clear, said Garrow.

"The transferring hospital was reminded of the long-standing protocols for body transport and they are working with their contractor to ensure this doesn’t happen again."

At least 21,393 coronavirus cases have now been recorded in India, according to the Ministry of Health and Family Welfare.

What else is going on in India?

A 100-year-old World War II veteran who died from Covid-19 lost his twin brother to the flu pandemic a century earlier, his grandson said.

Philip Kahn is the oldest veteran in Nassau County, New York, according to his family, and had been fearful of another pandemic happening in his lifetime, his grandson, Warren Zysman, told CNN.

"It was something he brought up quite frequently," Zysman said. "I would have conversations with him, he would say to me, 'I told you history repeats itself, 100 years is not that long of a period of time.'"

Kahn and his twin brother, Samuel, were born on December 5, 1919. His brother died weeks later, his grandson said.

The 1918 influenza pandemic, caused by a virus previously known as the "Spanish flu," killed an estimated more than 50 million people globally and about 675,000 in the United States, according to the Centers for Disease Control and Prevention. As of April 22, more than 46,000 Covid-19 deaths have been recorded in the US and about 19,000 fatalities in New York state, according to Johns Hopkins University's tally.

Kahn was a sergeant in the US Army Air Force during WWII, Zysman said, and acted as an engineer and co-pilot, keeping war planes fueled. He received two Bronze Battle Stars for his service in WWII, his grandson said. After the war, he worked as an electrical foreman to help build the World Trade Center, Zysman said. In Long Island, Kahn lived on his own and walked one to two miles a day, Zysman said.

He was very aware of what was happening with coronavirus since he watched the news all the time, and in the last days before his death on April 17, Kahn experienced coughing and respiratory symptoms of the virus, his grandson said.