US Secretary of State Mike Pompeo has criticized China previously for its handling of coronavirus, but tonight he was clearer than ever, saying, "China caused an enormous amount of pain, loss of life, and now a huge challenge for the global economy and the American economy as well by not sharing the information they had."

Pompeo, appearing on Sean Hannity’s show on Fox, added, "I am very confident that the Chinese Communist Party will pay a price for what they did here, certainly from the United States."

Pompeo has previously said "there'll be a time for recriminations" when asked if China should pay for the damage of the pandemic, but his language tonight is more direct in saying they will pay a price.

The top US diplomat said, "You should know we still don't have full transparency from the Chinese Communist Party, we are concerned there are things we don't know and we haven't been able to get our team on the ground to do the work that it needs to do."

European Union leaders agreed on Thursday to create a massive coronavirus recovery fund worth trillions rather than billions of euros.

But they did not endorse "coronabonds," the controversial debt-pooling instrument that countries such as Italy and Spain hoped for.

French President Emmanuel Macron said it was critical that the EU worked together in the face of the crisis, warning that "if we abandon part of Europe, all of Europe will fall."

Italian Prime Minister Giuseppe Conte, a fierce critic of the Europe-wide response to the pandemic that has hit his country so hard, expressed satisfaction with Thursday’s virtual summit.

He said the Council's decision to launch the recovery fund was "important" to help some of the hardest-hit countries.

"It's important because this is a necessary and urgent tool. It is absolutely necessary Italy is the first in line to ask for this," he said in a short video statement.

Coronabond controversy: The leaders agreed that the financing would be built into the EU’s next seven-year budget, rather than special instruments including the so-called "coronabonds."

Macron explained resistance to coronabonds by saying: "There is a consensus on the need for a strong, coordinated response of around 5 to 10 points of GDP, but there are disagreements on the means. Not to be too technical, but one of the questions is: Should the European debt serve to finance loans or real money transfers? If the European Union increases its debt to finance loans, this is insufficient. Because they would only be creating more debt to the countries they would be granting loans to."

The Czech government on Thursday laid out its plans to lift restrictions that had been imposed to curb the spread of coronavirus.

Starting Monday, some shops, gyms without locker rooms and showers, libraries and outdoor areas in zoos and botanical gardens will be reopened.

Religious services for a maximum of 15 people will also be allowed.

From May 11, all shops in shopping malls and those larger than 2,500 square meters (26,900 sq ft) will reopen, as will restaurants, bars and cafes that have outdoor patios.

From May 25, hotels, theaters, tattoo and piercing parlors will reopen, and weddings "under specific hygienic terms" will be allowed to go ahead, the statement says.

The Czech Republic has reported 7,187 coronavirus cases, including 210 deaths, according to data from Johns Hopkins University.

South Korea recorded no deaths from the coronavirus on Thursday for the first time in 40 days, the Korea Centers for Disease Control and Prevention said on Friday.

The country also recorded a fourth consecutive day of single-digit new cases, suggesting a potential slowdown of the outbreak.

The country has now reported 10,708 cases, according to Johns Hopkins University.

According to the KCDC, fewer than 2,000 of those are active cases, with the majority of total infected patients having recovered.

The country's government has been among the most ambitious when it comes to providing the public with free and easy testing options. Experts have attributed South Korea's decline in new cases to its early testing efforts, a successful example of what is now commonly referred to as "flattening the curve."

Hawaii’s state tourism agency, typically dedicated to welcoming visitors, is now paying for them to leave.

The Hawaii Tourism Authority has set aside $25,000 for the costs of sending tourists away if they refuse to abide by the state’s 14-day quarantine.

Outbound travel arrangements are being handled by the non-profit group Visitor Aloha Society, the state said in a news release.

Nineteen people have been flown back to their airports of origin since the beginning of the outbreak. In some cases, the violators have been prosecuted for misdemeanors and forced to pay a fine.

The Visitor Aloha Society arranges for the travel back home, and pays for the ticket if the visitor can't afford it.

The United States has reported at least 868,395 cases of the novel coronavirus, including 49,861 related deaths, according to Johns Hopkins University.

The totals include cases from all 50 states, the District of Columbia and other US territories, as well as repatriated cases and those in the US military.

Hafiz Mohammed Naseerudin says that after a police officer assaulted him for being a Muslim and blamed him for spreading the coronavirus, he was left lying on the road for almost an hour.

Naseerudin, 44, had gone to pick up some vegetables from his friend's house in Humnabad, in the southern Indian state of Karnataka, when he says an officer stopped him on his scooter.

Other vehicles were on the road, Naseerudin says -- he believes he was stopped because of his religion.

"I am an imam, so I look and dress very Muslim. I also have a long beard," he says. "The cop started hitting me and saying that it is because of me and my community that this disease is spreading."

Nagesh D L, police superintendent of Bidar district where Humnabad is located, says the officer has been suspended while an inquiry was conducted into the incident. Naseerudin says he called the police from hospital to make a statement, but Nagesh claims they did not receive any complaint.

Naseerudin is not alone: As fears over the coronavirus mount in India, some Muslims, who make up roughly 200 million of the country's 1.3 billion population, have been targeted in Islamophobic attacks and accused of spreading the virus.

In the capital New Delhi, volunteers distributing ration kits to Muslim families say they face harassment from police and are scared to go out. In Punjab, Muslim milk producers say they have been threatened by villagers, their houses have been raided by police, and people are scared to buy their produce.

While these incidents have been mostly isolated, the virus fears are only amplifying existing prejudices, playing into growing Hindu nationalism which in recent years has seen India's Muslim societies increasingly marginalized. 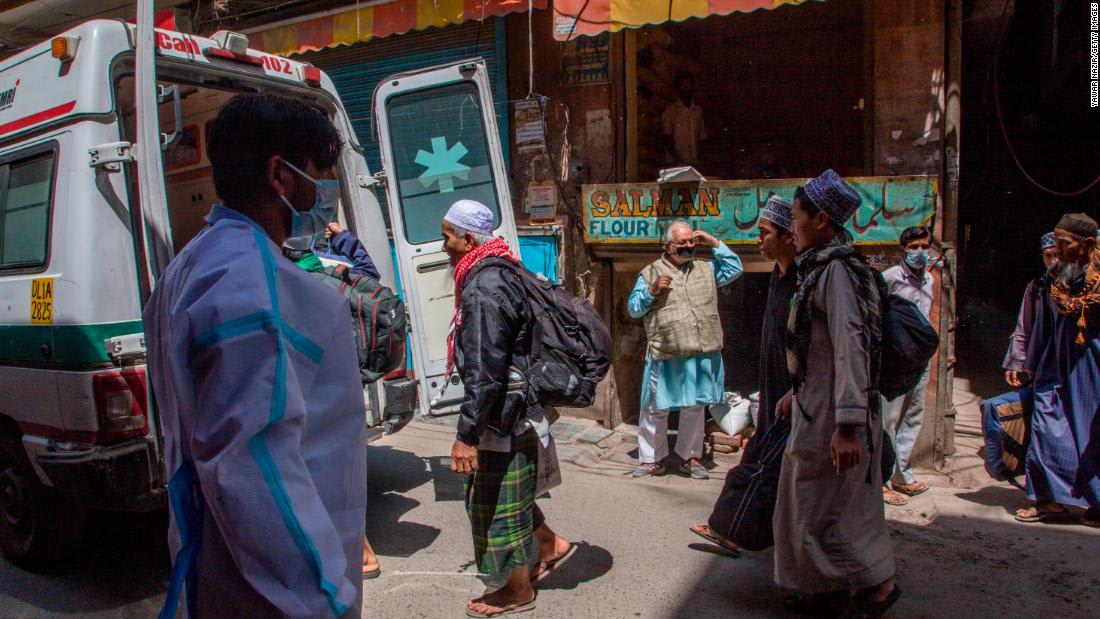 Mayor Bill de Blasio said that May will be a "decisive" month for New York City, adding, "I feel very good about things getting substantially back to normal by September."

De Blasio said that "somewhere between, you know, the end of May and the beginning of school is going to be a point where we start to loosen up," speaking on a radio program Thursday.

The mayor said the reopening process will be done in slow, careful stages.

De Blasio rehashed the city’s "aggressive" plan to get testing done by hopefully the hundreds of thousands, and reiterated that the federal government needs to help the city in terms of testing resources.

The testing sites the city set up in minority communities are seeing a good response, he said, adding that new sites he previously announced will come online soon, including those in New York City Housing Authority communities.

De Blasio also added that the "status quo before Covid-19 is not acceptable to me," addressing the racial disparity he says has been exposed by the virus.

The world is "weeks to months" away from knowing what drugs will work to fight Covid-19, said Dr. Maria Van Kerkhove, the technical lead for the World Health Organization's coronavirus response.

The WHO is tracking a number of studies that are trying to determine exactly how many people have been infected around the world, Van Kerkhove said.

According to one study in Germany, the number of people who have antibodies that show they've had the coronavirus infection ranges from 2% or 3% up to 14% of the population, she said during CNN's coronavirus town hall earlier tonight.

"What’s interesting about this is that these numbers, this seroprevalence, is a lot lower than some of the earlier models had predicted that would have suggested that this virus was circulating a lot more, and that much more of the population was already infected." Van Kerkhove said. "So these studies right now are not actually showing us that."

Seroprevalence is the number of people in a population who test positive for a disease.

The WHO is also closely monitoring the hundreds of Covid-19 drug trials.

It’s critical that the studies are done and done well, Van Kerkhove said.

"So we can get to the answer that everybody needs," she said. The results, she added, "can't come soon enough." But the world is "weeks to months" from knowing what works.