The governor also reported an additional 249 deaths bringing the total to 5,863.

“We see continued flattening,” the governor said today. “We cannot ease up one bit on our social distancing.”

Murphy said a lot of the folks who tested positive have now “battled and won” against the virus.

“We need to see more progress and more slowing before we can begin implementing any effort to get ourselves on the road to the new normal that awaits our state on the other side of this pandemic," he added. “Those curves are all going largely in the right direction." 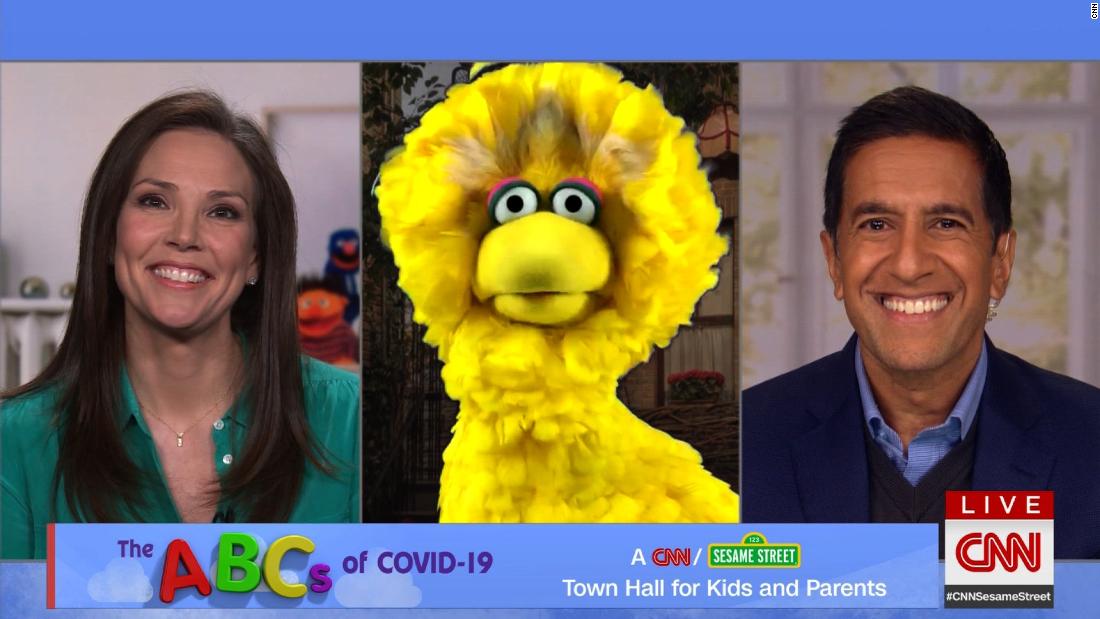 CNN partnered with Sesame Street for a special town hall about coronavirus to give kids the opportunity to learn more about the pandemic and ask questions.

"The ABC's of Covid 19: A CNN/Sesame Street Town Hall for Kids and Parents" aired on Saturday morning and tackled issues including education, anxiety, screen time and play dates.

The 90-minute program featured experts and Sesame Street characters -- including Elmo, Abby Cadabby, Rosita and Grover. Together, they answered questions submitted by families.

Florida Gov. Ron DeSantis says Florida should receive a shipment of antibody test kits on May 1.

The antibody testing kit company first had to send kits to New York before they could fulfill order for Florida, DeSantis said.

“We have now been confirmed that we will have the antibody tests that the state has ordered,” DeSantis told reporters today at a press conference.

Florida has had at least 30,839 cases and 1,055 deaths due to coronavirus, according to a tally from Johns Hopkins University.

Italy has recorded another 415 coronavirus-related deaths over the past 24 hours, the Civil Protection Agency said on Saturday.

That’s a record low number of deaths in a one day period, with only an increase of 1.6%. There were another 2,357 new infections, which is also a decrease. The total number of cases in Italy stands at 195,351, the agency said. There have also been 26,384 total deaths, according to a tally from Johns Hopkins University.

The Fulton County Public Health Department has reported that 23 residents at the Fulton Center for Rehabilitation and Healthcare in Gloversville, New York, have tested positive for coronavirus.

“Numerous residents at the Skilled Nursing Facility tested positive for the virus and the situation is being actively managed by the Center’s administration with direct oversight by New York State Department of Health, Bureau of Communicable Disease and Healthcare Epidemiology and Infection Control staff,” the Health Department said in a release.

Fulton County Public Health Director Laurel Headwell is in communication with facility directors and is monitoring "the scope of the situation," the release said.

"Monitoring of all residents and staff is ongoing,” the Health Department said.

“Other area healthcare facilities have been notified. The Department will provide more details as they become available on Monday and Tuesday of next week,” the release continued.

New York Gov. Andrew Cuomo said to increase the capacity of labs, the state needs more collection mechanisms, and he will sign an executive order to authorize all independent pharmacist in the state to be collection sites for testing

There are roughly 5,000 pharmacies in New York and some larger chains have already been doing it, he said.

“Just a quick clarification, the tests at the pharmacies will be diagnostic tests, positive negative, not antibodies tests," Cuomo said. “You will be able to go into a pharmacy and get a test, the parlance is the sample will be collected at the pharmacy, the pharmacy then sends it to a lab, the lab conducts the test.”

Cuomo said he had a great meeting with the federal government this week where a division of labor template was established for ramping up testing.

The state will take responsibility for getting labs in their state functioning, and also regulating them, the governor said.

The federal government is taking responsibility of making sure national manufactures have the tests reagents the vials swabs and all the equipment that is needed for labs.

The state is already doing more tests per capital than any other state or country. Cuomo said.

New York is doing more tests per capita than any other country in the world, Gov. Andrew Cuomo said at a news conference today.

Cuomo said the state is currently testing an average of about 20,000 people per day. This includes both diagnostic and antibody tests.

He said the goal is to expand testing even further with federal partnership to be able to conduct 40,000 tests per day.

Cuomo said President Trump "understood the federal government had a role" in testing and that they came up with a "division of responsibility" when the two leaders met at the White House on April 21.

"The states take responsibility for the labs in their state and getting those labs functioning," Cuomo said.

He said the states would regulate those labs while the federal government would ensure manufacturers were making enough supplies "to send to our labs so our labs can actually function," Cuomo said.

"We need the national manufacturers to have the reagents, the test kits and that's what the federal government is doing," he added.

Antibody testing is also expanding across the state for frontline workers, Cuomo said.

The antibody testing will expand to four hospitals and health care systems, he added.

The number of hospitalizations across New York, the state hit the hardest by the pandemic, continue to fall, Gov. Andrew Cuomo said moments ago during a news conference.

Despite this positive development, 437 people died in New York yesterday from the virus, Cuomo added. That number is up from 422 on April 24.

"This number is, as you can see, call it flat, call it flat with a slight decline, if you're looking for a silver lining. But this is just terrible, terrible horrific news," Cuomo said.

In terms of hospitalizations, Cuomo said, "All the numbers are basically saying the same. That we are, in fact, on the down side of the mountain."

There are at least 906,551 cases of coronavirus and 52,042 deaths in the US, according to Johns Hopkins University's tally.

As states begin to include “probable deaths” in their counts, so will the university. In the upcoming days, these changes may show as surges of deaths in the United States.

The totals includes cases from all 50 states, the District of Columbia and other US territories, as well as repatriated cases and those in the US military, veterans hospitals and federal prisons.