There have long been drive-thru theaters, fast food restaurants and even, in some places, pharmacies.

Now, in Texas, there's a drive-thru zoo -- at least temporarily.

The San Antonio Zoo announced it is giving families the opportunity to pack up their cars and drive-thru the park for a limited amount of time.

Visitors will be able to see lions, tigers, and bears, all from the security of inside their vehicle, as they listen to an audio guided tour. They will also be able to buy food and drinks curbside throughout the park.

"This is a very unique and safe way for families to see the zoo while we are closed from the comfort of their own car," Tim Morrow, president and CEO of San Antonio Zoo, said in a news release.
"This new, creative way to see the zoo will be a gradual step towards our plan to reopen to foot traffic when we are given the 'green light' and the time is right."

The zoo has been closed to the public since March 14 due to the pandemic, and as a result has taken a massive financial hit.

Proceeds of the new drive-thru experience will help the zoo continue to care for their animals, according to the news release. It has also allowed for the zoo to hire back some furloughed employees, Morrow told CNN in a statement.

Some 712 cases and 13 deaths are linked to the Diamond Princess cruise ship.

Japan saw its numbers spike this past month, and is under a state of emergency nationwide until May 6.

The country's health care system is struggling to keep up with the sheer number of patients; one doctor told CNN that 90% of his requests for tests have been denied, and that people are being turned away from hospitals.

Prime Minister Shinzo Abe warned yesterday that unless the pandemic is contained, it would be "impossible" to host the Olympic Games next year.

The novel coronavirus has infected more than 3.19 million people globally and killed more than 227,000. If you're just joining us now, here are the latest developments:

The CEO of Gilead Sciences, the maker of experimental drug remdesivir, said in an open letter today that the company’s existing supply of the drug could cover at least 140,000 treatment courses for Covid-19 patients.

The company offered the same number earlier this month.

The estimate is based on 10 days of treatment with the drug, which is the protocol used in a key remdesivir trial sponsored by the US National Institutes of Health.

On Wednesday, top infectious disease expert Dr. Anthony Fauci announced early results from that trial showing that remdesivir effectively shortened the duration of Covid-19. After Fauci’s announcement, the New York Times reported that the Food and Drug Administration is planning to issue an emergency-use authorization for the drug.

“Our existing supply, including finished product ready for distribution as well as materials in the final stages of production, amounts to 1.5 million individual doses,” Gilead CEO Daniel O’Day wrote on Wednesday. “We had estimated that this would be 140,000 treatment courses based on a 10-day treatment duration.”

The number of potential treatments is complicated by the fact that another trial of remdesivir, released by Gilead on Wednesday, found that five days of treatment appeared as effective as 10 days. That could effectively double the supply of the drug, which is infused through an IV.

The drug was originally developed to treat Ebola, but it was never shown to be effective for that.

In his open letter, O’Day expressed optimism about the future of the drug, writing that Wednesday’s results “open up many opportunities to explore the utility and potential of remdesivir.”

The Lufthansa Group announced Wednesday it will require all passengers and flight attendants to wear face masks onboard, starting May 4.

The airline said in a statement it recommends wearing masks before and after a flight at the airport.

“Despite numerous adjustments to the service processes, this distance is not always possible on a flight, so this measure serves as additional protection for all travelers,” the company said.

Lufthansa has also been in discussions regarding a government bail-out, German government officials told CNN earlier this week.

The airline told CNN it had no comment about the matter but previously said it is losing around 1 million euros ($1.09 million) of its liquidity every hour and that fewer than 3,000 passengers a day are currently flying with the airline, compared to its average of 350,000 per day.

Starting Tuesday, around 400,000 people have gone back to work, some children have returned to school, and takeaway shops and cafes have reopened.

But it’s definitely not back to pre-Covid life.

Wellington, the country’s capital city, remains extremely quiet, with few pedestrians out and few cars on the road. In the city center, it feels deserted -- like a public holiday.

In the city -- known for its coffee culture -- some cafes have reopened, but many remain shuttered. Those that have opened have strict rules -- some require customers to order through an app so it’s a contactless transaction, and customers aren’t allowed in the store.

On a regular, pre-Covid weekday, the New Zealand Parliament grounds would be packed with people eating their lunch. But on Thursday morning, the grass at the legislature looked overgrown, and there were few people around.

Many Wellington workers are public servants, meaning that many are not allowed back into the office under the eased restrictions.

Has New Zealand "eliminated" the virus? Case numbers in the country have dropped to the low single digits -- suggesting "we've achieved our goal of elimination," said Ashley Bloomfield, New Zealand's director general of health, on Monday.

He added that "elimination" does not mean zero cases, but means "we know where our cases are coming from." Since April 1, there is only one case where authorities are still investigating the source of infection, he said.

While many businesses are allowed to reopen in the US state of Georgia, some black small business owners are struggling with the decision, especially since black Americans appear to be at higher risk when it comes to Covid-19.

Glenn Singfield II, of Albany, Georgia, said although his family is hurting financially, they will keep their restaurant, The Flint, closed until they can come up with a plan to keep employees and customers safe.

"I support my governor, mayor, all that," he said. "However, we have to do what's best for our community and our people and our employees."

Albany has been hit hard by Covid-19 cases -- and Singfield II said he has lost people close to him and his family to the virus.

"Anybody getting sick and passing away or getting sick period, it would hurt us personally," Singfield II said.

The decision to reopen: Georgia Gov. Brian Kemp, a Republican and ally of US President Donald Trump, was among the last governors to sign a shelter-in-place order on April 2. He announced last week he would allow certain businesses in the state -- including nail salons, massage therapists, bowling alleys and gyms -- to reopen.

Kemp's decision has been widely criticized, and even Trump, who has been pushing for businesses to reopen as soon as possible, said last week that he "strongly" disagreed with Kemp. 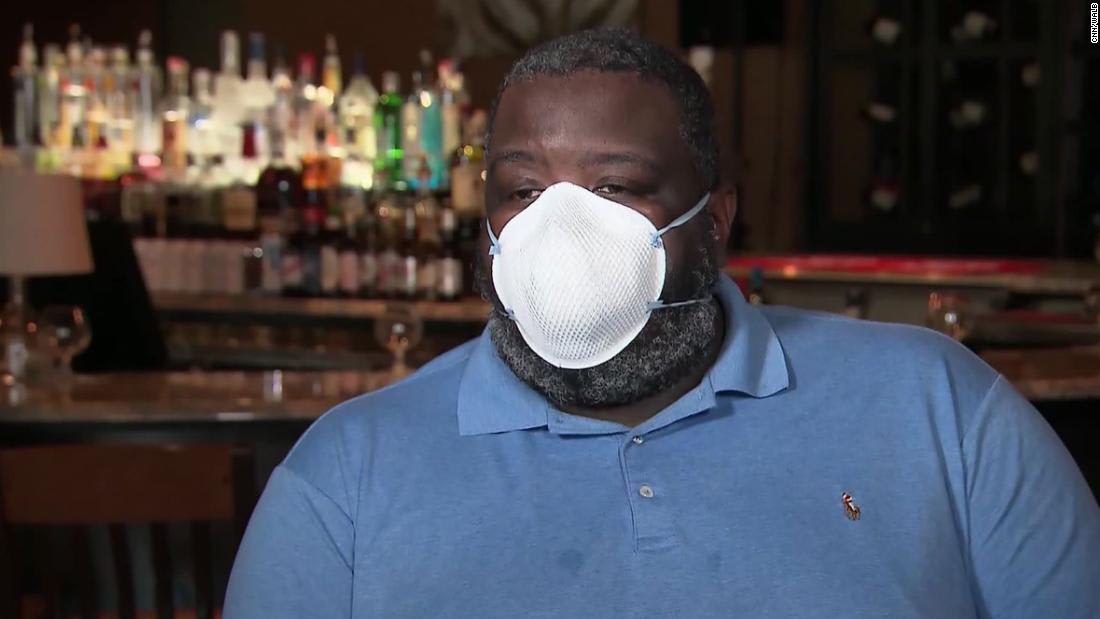 Black-owned businesses in Georgia struggle as the state reopens

That brings the official national total to 82,862 cases and 4,633 deaths. That doesn't reflect the number of active cases, but rather the total number of infections since the pandemic began; so far, 77,610 patients have recovered and been discharged from hospital.

Another 33 new asymptomatic cases, which are counted separately, were also reported yesterday.

Fears of a second wave: The situation in China appears to have calmed down mostly, with local transmissions dropping close to zero and cities slowly reemerging from lockdown.

The country announced yesterday it will hold it biggest annual political meeting in May following a two-month delay -- the strongest signal yet from the government that it considers the coronavirus outbreak to be under control.

But beneath the surface, fears about a potential second wave of infections remain high.

As of Wednesday, a total of 1,660 imported cases have been reported, mostly Chinese nationals returning from overseas. In many cities, all overseas arrivals are required to go into mandatory quarantine for at least two weeks.

How bad is the coronavirus economy? The worst ever, says US Fed Chairman Jerome Powell.

"We are going to see economic data for the second quarter that is worse than any data we have seen for the economy," Powell said. "There are direct consequences of the disease and measures we are taking to protect ourselves from it."

The recovery will be long and painful, but the economy could begin to bounce back significantly in the third quarter as businesses reopen, he added. While we won't go back to pre-coronavirus levels for quite some time, the third quarter could provide some economic relief.

"We will enter the new phase -- and we are just beginning to maybe do that -- where we will begin formal measures that require social distancing will be rolled back, gradually, and at different paces in different parts of the country. And in time, during this period, the economy will begin to recover," Powell said.

American minorities threatened: Powell also noted that unemployment shot higher for minorities in the United States -- much faster than it has for white Americans.

Just a few months ago, the US labor market was the best-ever for minorities, Powell noted. Now, minorities are among the first to lose their jobs as stay-at-home orders have shuttered restaurants, movie theaters, retailers and many other businesses.

"It is heartbreaking, frankly, to see that all threatened now," Powell said. "All the more need for our urgent response and also that of Congress, which has been urgent and large, and to do what we can to avoid longer run damage to the economy."

Powell noted that people "who are least able to bear it have been the first to lose their jobs, and they have little cushion to protect themselves.

"That is a very big concern," Powell said.