At least 1,069,534 cases of coronavirus have been recorded in the United States, including 63,001 deaths, according to Johns Hopkins University.

See CNN's interactive map of cases in the US:

CNN's global town hall on the coronavirus has now concluded.

Scroll through our posts to catch up on what happened during the town hall.

The United States and the world could have done a better job of mitigating the dire impact of the coronavirus pandemic, Bill Gates said.

"If you use January and February properly and did community testing, you didn't have to go through this horrific economic cost," Gates said on CNN's global town hall. "Tools can be developed enough that an epidemic like this one could have been stopped at very small numbers."

In an article he wrote for The New England Journal of Medicine, Gates said it would likely cost billions of dollars in order to be better prepared for a pandemic like this one.

However, he said that compared to the cost of the US defense budget, such an investment would prove frugal.

"For something that's not even 5% of the defense budget, (or even) below that, you can have pandemic preparedness, innovation, stockpiles, simulation that at least for this threat would have been overwhelmingly successful," he said.

CNN's Anderson Cooper announced before the close of the network's coronavirus town hall that he is a new father.

Wyatt was born three days ago and was named after Cooper's father, he said Thursday night.

"My son's middle name is Morgan which is a family name on my mom's side. I know my mom and dad like the name Morgan because when I was going through their things recently I found a list they made when they were trying think of a name for me. That's Wyatt Morgan cooper, my son. He was — he was 7.2 pounds at birth, and he is sweet and soft and healthy, and I am beyond happy," Cooper said.

Cooper added: "As I gay kid, I never thought it would be possible to have a child and I"m so grateful for those who paved the way. It's an extraordinary blessing she and all surrogates to give to families. My surrogate has a beautiful family of her own, amazing husband. I'm so thankful for the support she has given Wyatt and me. She has kids of her own. My family is blessed to have this family in our lives. I do wish my mom and dad and brother were alive to meet Wyatt, but I like to think they can see him. I imagine them all around each other smiling and laughing and watching, looking down on us. Happy that their love is alive in me and Wyatt and that our family continues."

Ahead of expected Labor day protests, Hong Kong’s Chief Executive Carrie Lam said the city has been able to withstand the coronavirus pandemic but might not be able to bear a return of political violence.

Hong Kong was rocked last year by pro-democracy, anti-government protests with escalating violence and anger on all sides. The pandemic has put a damper on protests, but anger in the city has not gone away nor has the protest movement gone completely dormant -- even as restrictions on gatherings and a desire to avoid infection has put a temporary halt to the kind of mass demonstrations seen in 2019.

Microsoft co-founder Bill Gates warned tonight that relaxing social distancing policies too soon would lead to unnecessary deaths and future peaks in US states that are moving too quickly to return to normal life.

"Because people are going to go back to more association in some places in the country it's very likely that there'll be future peaks as well," Gates said, speaking at CNN's global town hall.

"That's right. There will be deaths in the summer and in the fall," he added, when asked by CNN's Anderson Cooper if those peaks would mean "more deaths than there would have been otherwise."

Gates warned that if warm weather slows the spread of the virus in the summer, as some experts predict, it could cause Americans to be “lulled into complacency” that could prove dangerous in the fall.

"Very quickly you can get yourself back into exponential growth," he said.

Speaking at CNN's coronavirus town hall, Bill Gates said he believes that the novel coronavirus pandemic is likely to affect poorer countries and communities much greater than wealthy ones.

"Like most bad things, poor countries will probably have it the worst and the poorer lower income people in the United States will have it worse," Gates said.

"(A) low-income student probably is not getting online instruction as much as the suburban kid. The household you're confined to is probably very different," he said.

One in six residents in the US state of Tennessee are currently unemployed, according to Gov. Bill Lee.

Lee said that 400,000 of those job losses were a result of Covid-19 and its impact on the state, during a town hall sponsored by CNN affiliate WKRN.

Like many other states, Tennessee has faced challenges paying out unemployment claims. According to Lee, the state had to upgrade its system to accommodate what he described as the three different "pieces" or types of unemployment claims -- state, federal and the self employed.

The Tennessee system was upgraded last weekend and now expects to process and pay out 300,000 claims this week, said Lee. The governor acknowledged there are still claims that need to be processed but says a "majority of Tennesseans" are getting their claims this week.

Some 30.3 million Americans have filed for unemployment over the past six weeks -- representing roughly 18.6% of the US labor force -- as businesses have laid off and furloughed workers during stay-at-home orders across the country. 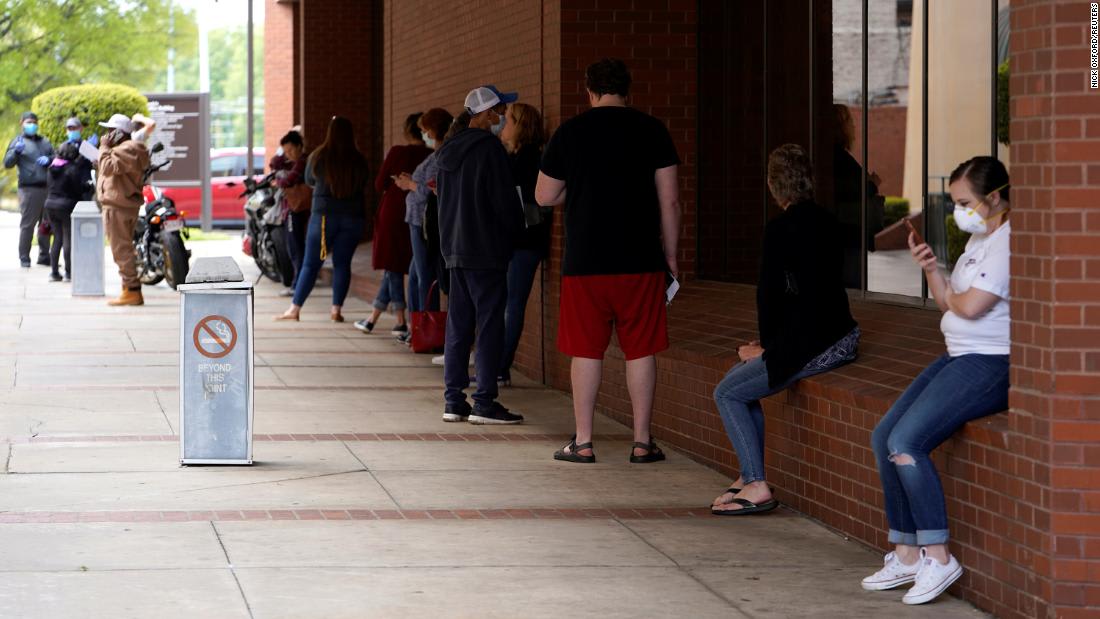