Matt Hancock, the UK's Health Secretary, proudly announced on Friday that the country had hit an ambitious coronavirus testing target that it had set itself at the beginning of the month.

On April 2, after weeks of criticism that the UK was lagging behind its European counterparts like Germany on testing, Hancock told the nation that he was "setting the goal of 100,000 tests per day, by the end of this month. That is the goal and I am determined that we will get there."

Today, Hancock said from that same podium that the UK had beaten that goal by more than 22,000.

Striking an upbeat tone, Hancock said: "I knew it was an audacious goal, but we needed an audacious goal." Critics might point out that the goal wasn't the only thing to come out of Hancock's mouth that could be called audacious. In the numbers counted, thousands of tests have been sent out to members of the public, but not necessarily returned.

Jonathon Ashworth, the opposition Labour party's shadow health secretary, has already issued a statement, accusing the government of fiddling the numbers. "Increasing testing is an important milestone. But many would have expected the 100,000 promise to have been met by actually carrying out testing, not simply because 39,000 kits had been mailed out."

The issue of testing didn't need to become so political.

When the UK gave in to pressure to reverse its March 12 decisions to abandon mass community testing on April 2, it didn't need to set itself a specific target or a specific deadline. Indeed, it seems very unlikely that any scientific or medical advice would have produced a round number like 100,000 or a neat date such as the end of a month. These promises were based on political choices made by the government and it is entirely reasonable that critics expected the target to be met.

It is, however, also reasonable for critics to point out that the date and the number of tests carried out is entirely arbitrary and what really matters is a coherent purpose for those tests being carried out — such as rolling out a contact tracing program.

So, while the UK government can be proud of its extraordinary expansion of testing in such a short period of time — and no one can deny that more testing is undeniably a positive thing — it's reasonable that critics would find any backslapping for simply keeping its own promise somewhat unedifying.

The UK transmission rate has fallen below one — which means that the number of new infections in the community is falling, National Medical Director of NHS England Stephen Powis said on Friday.

"We have begun to get on top of this virus," Powis said at the daily government coronavirus briefing. Powis also highlighted that the number of deaths was beginning to "trend downwards."

A word of caution: In his first remarks after returning to work Monday, UK Prime minister Boris Johnson warned that the country was at "the moment of maximum risk" and suggested restrictions would need to remain in place for the time being in to avoid a second peak of infection.

The UK's lockdown measures are due to be reviewed again by May 7.

UK has met its target to test 100,000 people a day for coronavirus by the end of April, UK Health Secretary Matt Hancock said during the daily Downing Street briefing on Friday.

The total number of coronavirus infections in the UK has reached 177,454 cases, an increase of 6,201 from the day before, Hancock said. At least 27,510 people have died from the virus in the UK.

The Health Secretary added that now that the UK is past the peak of infections, the National Health Service has begun restoring services it halted in order to dealt with the coronavirus pandemic.

The World Health Organization said it still considers the coronavirus pandemic a public health emergency of international concern, WHO's highest level of alarm for the world.

Houssin added that there is still much to learn about the transmission of the coronavirus.Currently, there is no vaccine nor licensed therapeutics for the treatment of Covid-19.

Assessing the response: On Thursday, WHO reconvened the committee of independent international experts to assess the state of the coronavirus pandemic and review WHO's recommendations on how to respond.

Officials said the committee would meet again in 90 days, or sooner, if needed.

Additionally, earlier today, WHO confirmed to CNN that it has not been involved in China's investigations of the origins of the novel coronavirus — but it "would be keen" to participate in such studies.

These live updates have been running nonstop for 24 hours a day, seven days a week, for 100 days.

This has been a collaborative effort among CNN journalists worldwide — starting with Hong Kong and going on to London, New York, Washington DC, Atlanta and Los Angeles.

Thank you to all of our readers. Thank you to team behind the scenes making sure you get the latest reporting from CNN on this global pandemic.

The Indian government has extended its nationwide lockdown by two more weeks until May 17, but has issued exemptions for certain areas and activities, according to Ministry of Home Affairs.  The current measures were set to expire on May 3.

Most travel by air, rail, metro and inter-state movement by road will continue to be prohibited and all schools and colleges will remain closed along with theaters, malls and places of worship.

The Ministry of Home Affairs will allow movement of people by air, rail and road only for select purposes. Over the last few days, the government has arranged for transportation for stranded migrant workers, students and tourists to travel back to their homes.

The government has eased most restrictions in areas the government calls “green zones,” which have not reported new cases of Covid-19 in the previous 3 weeks.

The classification of certain districts into red or orange zones will be evaluated every week. In orange zones, limited movement of individuals and vehicles will be allowed. In red zones, where most activities have been restricted for the past six weeks, will continue to be so.

Across all zones, industrial activities involved in the manufacturing of essential goods — such as pharmaceuticals, medical devices, construction activities, standalone shops and agricultural activities — are permitted. In red zones, e-commerce firms can continue supply of only essential goods.

The order also prohibits movement of individuals for non-essential services from 7 p.m. to 7 a.m. local time during the duration of the lockdown. Local authorities have been asked to issue bans on gatherings of more than four people.

McDonald’s will reopen 15 of its restaurants in the UK on May 13 in a limited capacity and with delivery only, McDonald’s UK and Ireland CEO Paul Pomroy said today.

The company plans to introduce new measures to keep its staff safe. Clear screens and floor markings will be introduced in specific areas, and additional protective equipment, including non-medical grade face masks, will be provided. Contactless thermometers will be used on arrival at work for every shift.

McDonald’s will also be introducing social distancing measures for all of its delivery and service partners.

“We will increase how often these procedures are completed and provide all employees with updated training on restaurant cleanliness and sanitization. All restaurants will be deep cleaned before reopening,” said Pomroy.

McDonald’s plans to return with fewer staff and a limited menu.

Special trains are being organized by the Indian government to ferry stranded migrants, students, tourists and pilgrims across India.

The Ministry of Home Affairs announced in an order today that the Railway Ministry will begin running special trains and ensure safe movement of people.

“The Ministry of Railways will issue detailed guidelines for sale of tickets; for social distancing and other safety measures to be observed at train stations, train platforms and within the trains,” said the Home Ministry.

Some background: The Indian government had suspended all passenger trains in India in March as the country headed to a nationwide lockdown. In the past two weeks, certain restrictions have been eased. Various states have also arranged buses to transport their residents back home.

The cost of a three-course meal at Bord For En (Table For One), a pop-up restaurant in Sweden opening May 10, is left to the diner's discretion.

And that is diner, singular, just like the restaurant's name suggests.

Rasmus Persson and Linda Karlsson are responsible for the unique concept. Located in Värmland, roughly 350 kilometers (217 miles) from Stockholm, the restaurant -- a single table and chair -- is situated in a lush meadow.

The promise and premise is no interaction with others. This is an individual experience meant to be enjoyed in isolation.

There's no waitstaff and nary another guest in site. Throughout its limited run (it will be open through August 1), one person a day will be served so Persson and Karlsson can give their full focus to the guest.

The couple is not trying to turn tables and won't allow spectators.

"We want to avoid the feeling of being watched while you eat your food. We all are facing difficult times and there are people who have lost their jobs, a loved one or even their mind."

Persson and Karlsson devised the Table for One concept several weeks ago when Karlsson's parents showed up at the couple's home as Covid-19 spread around the globe.

They decided rather than let Karlsson's at-risk parents inside the house, it would be prudent to set up a table for them outside in the garden a safe distance away. 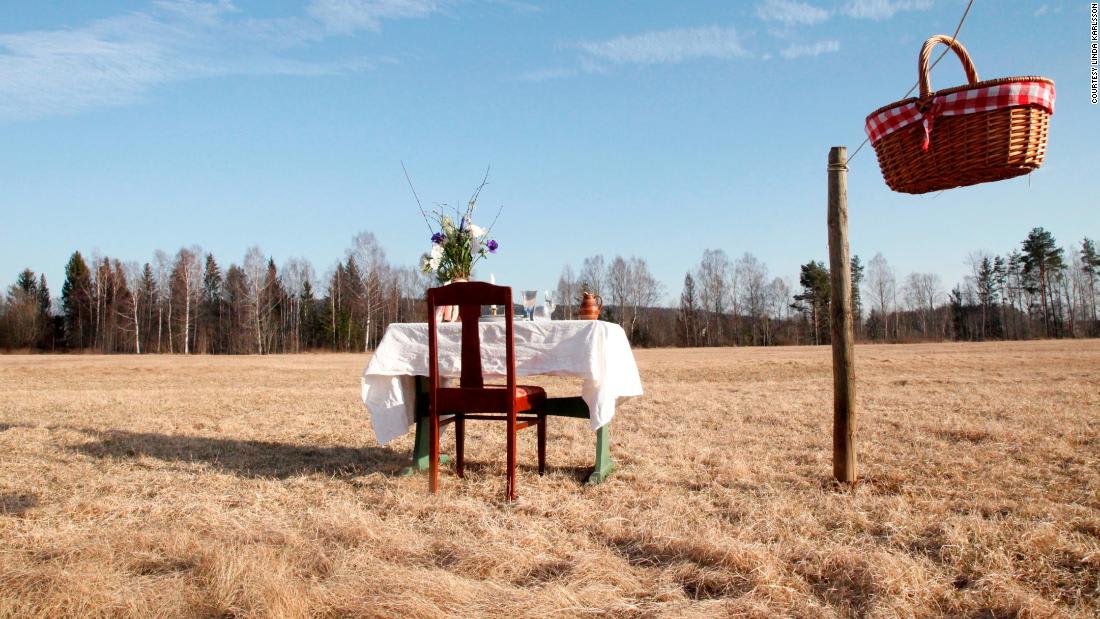 Table for one? Sweden pop-up restaurant to serve solo diners only