More than 1 million Florida workers have filed for unemployment benefits, according to the Florida Department of Economic Opportunity (DEO) website.

The state has received 1,025,657 unique unemployment claims for the period between March 15 and May 2, the DEO site says.

Miami-Dade County leads the state with 66,842 unemployment claims filed. The hospitality industry has been hit the hardest with 115,313 claimants in "accommodation and food services" filing for unemployment throughout the state, the DEO website says.

To date more than $700 million has been paid to claimants, about 60% of which was funded by the Federal Pandemic Unemployment Compensation program.

The state of Illinois has reached an agreement with a handful of banks that will allow residents without bank accounts to cash their stimulus checks free of charge, Gov. J.B. Pritzker said during a Sunday news conference.

One in five Illinois households are either underbanked or unbanked, Pritzker said.

Other banks are welcome to join the agreement, Pritzker said.

Ronald Reagan National Airport in Washington has announced that American Airlines will only use the center concourse at the airport, or gates 23-34, beginning Monday. As result, due to reduced activity, the airport will temporarily suspend flight operations from Terminal C, Gates 35-45.

This closure will include gate 35X, American’s commuter gate that required passengers to be bused to and from their planes.

New York Sen. Chuck Schumer is calling for the federal government to stop predatory lenders from preying on people who are in desperate need of emergency funds as the coronavirus pandemic continues to cause economic hardship for millions of Americans, in a press release issued Sunday.

“The coronavirus crisis is creating a desperate situation for countless Americans and New Yorkers, but it is also creating nefarious opportunity for greedy loan sharks who smell proverbial blood in the consumer waters,” Schumer said.

He said that "loan sharks" will stop at nothing to drown everyday consumers and small businesses “in a cascade of debt that could far outlast the coronavirus itself."

Schumer wants the nation’s federal regulators, including the Consumer Financial Protections Bureau (CFPB) and the Federal Trade Commission (FTC), to act and stop rolling back regulations that enable predatory lenders to prey on people.

There were 19,417 new coronavirus tests conducted in Illinois within 24 hours, which is the highest number ever performed in a single day, Gov. J.B. Pritzker said during a Sunday afternoon news conference.

Pritzker said that 2,994 new coronavirus cases were reported Sunday for a total of 61,499.

An additional 63 deaths were reported for a total of 2,618 coronavirus deaths, Pritzker added.

Scams on the rise: Officials in Illinois have heard of several coronavirus-related scams including door to door sales of testing kits and fake products to treat the virus, Pritzker said.

There have been instances of people soliciting donations for fake charities and fraudulent efforts to obtain stimulus checks, according to Pritzker.

The state Attorney General will use the power of his office to hold people accountable for their actions during the coronavirus pandemic including attempts to scam people, Pritzker added. 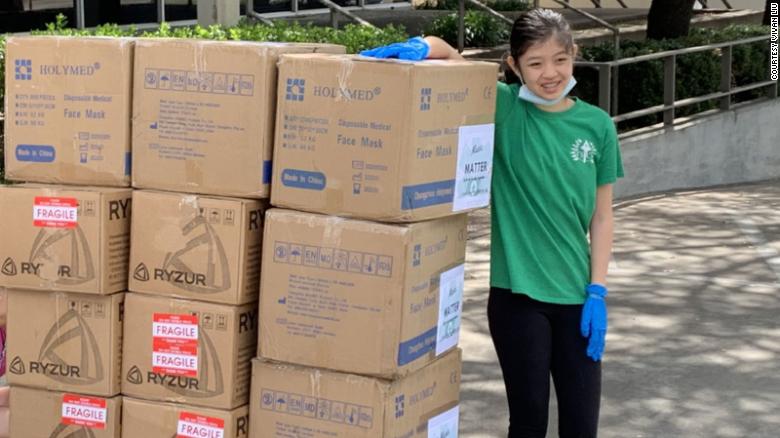 Most ninth-grade girls worry about schoolwork, friends and crushes. Lately, however, Valerie Xu has focused on face masks.

The 15-year-old from Addison, Texas, says she wanted to do something about the lack of protective gear for medical workers during the coronavirus pandemic. She also wanted to combat stories stigmatizing Asian Americans during the outbreak.

Armed with resourcefulness and a teenager's urge to fit in, Xu raised donations and delivered 10,000 protective masks to a Dallas medical center.

Some background: The donation drive started with a conversation Xu had with a family friend, a Florida emergency room doctor who was forced to wear the same protective mask for several days.

"This really amazed me in America," Xu told CNN. "We're supposed to be considered the richest country in the world, yet doctors and nurses fighting on the front line cannot get proper protection."

Since Xu wanted to make a local impact, she launched a GoFundMe to purchase masks for the UT Southwestern Medical Center, the largest facility near her home.

So far, it has raised more than $3,800. Xu researched vendors in China and picked two suppliers, donating $1,200 of her own money to the cause.

Some businesses will start to reopen in Spain on Monday as the country starts "Phase Zero" of loosening coronavirus restrictions.

Following eight weeks of strict confinement since a country-wide state of emergency was declared on March 14, the process of transition in Spain will be gradual.

The four phases will be determined by a “series of indicators, such as the strategic capacities available in the healthcare system," officials say.

Some of these indicators include being able to test and identify sources of contagion and the ability to isolate and control those sources.

Some other context: Spain's Ministry of Health said another key to reopening the economy is the availability of hospital beds.

For every 10,000 residents, hospitals have to be able to add between 1.5 to 2 intensive care unit beds, and between 37 to 40 beds for severely ill patients, as outlined by the Ministry.

Across Spain, masks will be mandatory on public transport as of Monday.

Here are some of the reopening guidelines for businesses:

Asset management company and hotel group Ashford Inc. announced on Saturday that it will return all funds provided by the Small Business Administration due to the agency's recently changed rules, according to a press release.

Calling the federal guidance “inconsistent,” the company defended itself and said that Congress designed the Paycheck Protection Program to allow companies that own multiple hotel properties to obtain separate loans for each property.

Ashford said that they could not have known that appropriations would be insufficient to cover other businesses.

“Ashford management had no intention of crowding out any business from gaining equal access to the PPP funds,” the company said.

The Wall Street Journal and the Dallas Morning News first reported the news on Ashford.

Connecticut closed 11 state parks Saturday as limits were reached for proper social distancing, according to the state's Department of Energy and Environmental Protection (DEEP).

Sleeping Giant and Southford Falls state parks, both near New Haven, were among those closed early. All these parks were reopened Sunday morning.

DEEP has only closed two state parks indefinitely, both because geographic features made it difficult to maintain a safe distance.

If the crowds at parks continue, there may be indefinite closures, Healey said.

"That’s an option that’s on the table," Healey said. "We want to keep them open during this public health crisis, but we want to do it as safe as possible."