The Philippines has temporarily suspended all passenger and commercial flights to and from the country starting from 8 a.m. local time Sunday, to prevent the spread of coronavirus, the country's airport authority said.

The Philippines currently has 8,928 confirmed coronavirus cases and 604 deaths, according to the country's Department of Health.

Thailand began to ease some of its month-long coronavirus restrictions today, as Covid-19 cases in the country continue to fall.

Bangkok and provinces can consider reopening certain businesses and loosening restrictions on daily life -- including the sale of alcohol, which had been prohibited under the Emergency Decree -- according to the Tourism Authority of Thailand (TAT),

Here's how the resumptions will work:

The extended Emergency Decree will run until midnight on May 31.

A curfew from 10 p.m. local time until 4 a.m. is still in effect. A ban on "high-risk transmission areas" such as cinemas, zoos, water parks, public swimming pools, gyms and beauty clinics remains in effect.

Almost everyone knows the lyrics to Queen's "We Are the Champions." Now, the band has turned the song on its head, as a tribute to workers on the frontline fighting coronavirus.

Brian May, Roger Taylor and Adam Lambert teamed up to release "You Are The Champions" on Thursday, in a new version of the classic song.

All proceeds made from the song will go towards the Covid-19 Solidarity Response Fund for The World Health Organization.

Queen and Lambert were scheduled to be on the European leg of their Rhapsody tour, but the ongoing pandemic led the musicians to postpone the dates. This song, though, was recorded while May, Taylor and Lambert were all self-isolating in separate cities.

The British government wants you: To cut lettuce from the fields, pick berries from the bushes and load boxes of fresh produce into cold storage warehouses.

While many people hunker down at home, reloading the internet sites of grocery stores to secure a home delivery slot or dreading the socially distanced, masked visit to a supermarket, it's easy to lose sight of the supply chain and where that food is coming from.

As Covid-19 cases surpass 170,000 in the United Kingdom, British farmers are facing spring cut off from the Eastern European migrant workers that make the harvest possible. But with thousands of Brits laid off or furloughed, the UK government now says its official policy is to try to get locals onto the fields.

Sally Penfold, 45, was until recently a waitress at a restaurant in Hastings. After the UK government lockdown took effect, she lost her job.

Penfold is one of several people seeking work at a family-owned farm in Kent, southeast England.

"I was fed up with being indoors, not earning any money," said Sally Penfold, 45. "I just wanted to get out there and do some kind of work. I think providing food for the nation is quite an honorable thing to do." 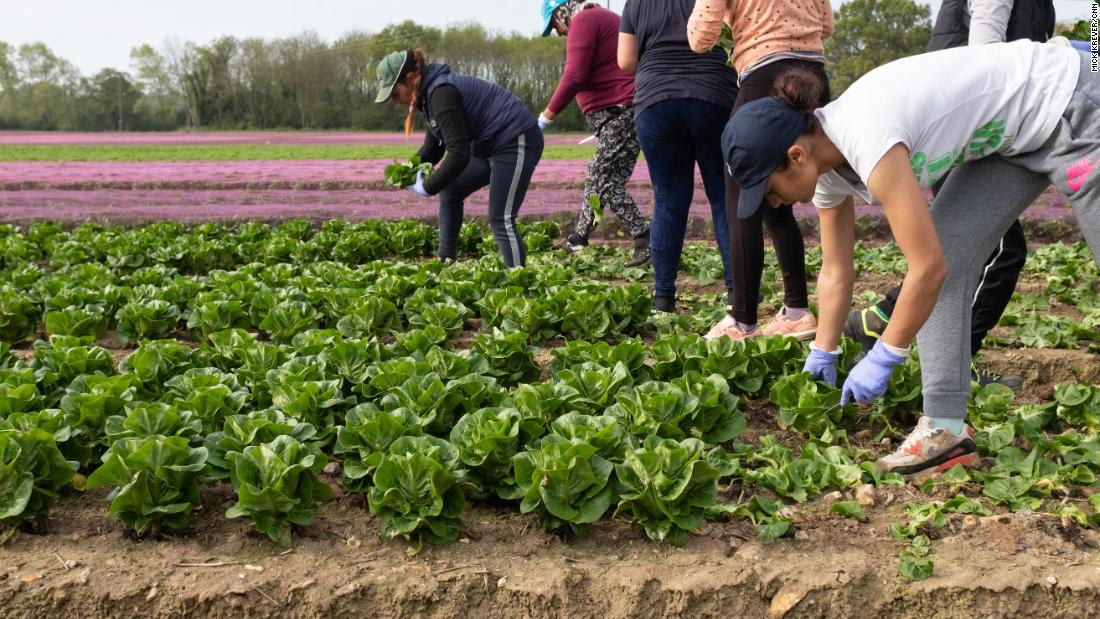 A few weeks ago, they were engineers, chefs and waitresses. Now they're farming

With much of the world's human population stuck at home during the coronavirus pandemic, one Japanese aquarium is exploring a new way to ensure its inhabitants don't get too used to the peace and quiet.

In an appeal this week, Tokyo's Sumida Aquarium asked for volunteers to FaceTime its 300 spotted garden eels, which have had limited interactions with humans since the aquarium was forced to close in March.

"As the (aquarium) has been closed for a long time, the animals aren't seeing any other people other than the staff ... they're beginning to forget about humans," the aquarium said in a statement.
"The garden eels in particular have started to burrow themselves into the sand and hide even when aquarium (staff) pass by their tank," they added.

This, the aquarium says, is a problem -- the eels' newfound shyness means staff are unable to check up on the fish and make sure they are healthy.

The novel coronavirus has infected more than 3.4 million people worldwide and killed at least 243,000, according to data from Johns Hopkins University.

Here are the five countries with the highest figures:

Some countries are still responding to spikes in cases and deaths while in others, people are returning to normal life. Here's what the pandemic looks like in Asia Pacific:

India: The nationwide lockdown, affecting 1.3 billion people, was scheduled to lift on Sunday, May 3 -- but has since been extended to May 17. However, restrictions have eased in some low-risk areas that haven't had new cases in three weeks.

China: Mainland China was the first country in the world to go under lockdown. Now, with its daily cases in the low single digits, some cities are easing their restrictions and tourist favorites like Beijing's Forbidden City are reopening. However, some limitations remain, such as daily visitor caps and health checks. More than 1 million people flocked to Shanghai's attractions over the Labor Day weekend.

Singapore: The city-state plans to ease restrictions over the coming weeks, with business to resume more fully from June 1. Employers and companies will be under strict requirements to reduce the risk of infection. Some residents will be allowed to exercise in public areas from May 5 and from May 12 select services will be allowed to resume, including food manufacturing, food delivery and takeaway, laundry services, and hairdressers.

Australia: Restrictions have loosened in some states and the federal government is considering ending the nationwide lockdown early. In Queensland state, residents are allowed to go out for recreational activities like picnics or boating. While people are still expected to observe social distancing, residents flocked outdoors today, eager for fresh air after weeks at home.

Malaysia: The country will allow the majority of businesses to reopen Monday. Those that involve close contact like movie theaters or nightclubs will remain closed. Malaysia has started rounding up undocumented immigrants to prevent the spread of coronavirus.

Japan: The nationwide state of emergency was set to lift on May 6, but Prime Minster Shinzo Abe said on Friday that the government plans to extend it for about a month -- a decision is expected on Monday. Japan's cases have spiked in recent weeks and on Saturday it reported 289 new coronavirus cases and 34 deaths.

New Zealand: Prime Minister Jacinda Ardern said the country had "eliminated" the virus, but has urged people to be vigilant. Police say they have had more than 1,000 reports of people breaking the ban on mass gatherings as level 3 restrictions continue.

There are now significantly more American deaths from Covid-19 than there were US troop fatalities during the Vietnam War. Meanwhile, Vietnam still hasn't recorded a single death.

With so many lives at stake, it's time the United States looked to those countries in the Asia Pacific region that have successfully controlled the pandemic to figure out how to save ourselves and the economy.

Several places in the Asia-Pacific, including Australia, China, New Zealand, South Korea, Taiwan and Vietnam, have reported suppressing the reproduction number -- the average number of people who will catch the disease from a single infected person -- to below 1, without the need for continued, widespread lockdowns.

They are now rapidly and successfully suppressing outbreaks of the disease by isolating those who are infected and their contacts who are likely to be infected.

It's as if there are two worlds.

How have these countries succeeded to date?

Many have adopted nationwide public-health standards, using mobile technologies, professionalism of government, widespread use of face masks and hand sanitizers, and intensive public health services to isolate infected individuals or those likely to be infected.

Testing has played an important role, but has not been the decider it is sometimes portrayed to be in the United States.

Editors note: Jeffrey Sachs is a professor and director of the Center for Sustainable Development at Columbia University. The opinions expressed in this commentary are those of the author; view more opinion articles on CNN.

It's a popular argument heard at protests denouncing state shutdowns, fueled by those who say news outlets are overreacting to coronavirus:

The flu kills more people than coronavirus. Why shut down the economy for this?

Here are several reasons why coronavirus is more dangerous than the flu -- and why extra precautions are needed:

Coronavirus is much more contagious.

Coronavirus has killed at a much faster rate.

Between October 2019 and early April 2020, the flu killed up to 331 people a day, according to the preliminary CDC numbers.

From February 6 through April 30, the coronavirus killed an average of more than 739 people per day in the US.

Coronavirus can be spread for many days without symptoms.

With the flu, people typically start feeling sick one to four days after infection, with symptoms often showing up within two days, the CDC says. That means people will know they're sick fairly soon and will likely stay home.

But with coronavirus, symptoms typically appear four or five days after exposure, and the incubation lasts up to 14 days.

You can get a flu vaccine but not a coronavirus vaccine.

Unlike the flu, there's no option to get a vaccine for the coronavirus to protect against infection or to reduce the severity of symptoms. At the earliest, it'll be months before a coronavirus vaccine might become publicly available.