Most of Vietnam's 22 million students returned to class today after a three-month closure to tackle Covid-19, the state-run Vietnam News Agency reported.

Eighteen of the country's 63 provinces and centrally-run cities will open all schools starting today, while 30 others are reopening primary schools and kindergartens as secondary students went back in late April.

Ten other localities including the main cities of Hanoi and Ho Chi Minh City will resume primary schools and kindergartens later.

VNA reports many schools have "rearranged desks while others had to consider dividing classes into smaller ones" but that many schools are facing "difficulties in keeping the minimum distance of one metre among students due to the shortage of teachers and classrooms."

In addition, some schools changed class schedules and will continue to teach through the internet and televised classes.

Spanish authorities in the Balearics are testing travelers to one of the islands, Formentera, which is advancing to "phase one" of the lockdown de-escalation measures laid out by the government last week.

Spain has implemented one of the strictest lockdowns in Europe but now with some restrictions beginning to ease, four of the country’s islands, three in the Canaries -- La Gomera, La Graciosa and El Hierro -- and Formentera in the Balearics are jumping to the more advanced "phase 1."

These four islands will see an earlier easing of restrictions because they “have not had any new cases in many days, and very few, or no new infections” Fernando Simón, the country’s director for health emergencies said on Sunday.

Travelers taking the ferry from the island of Ibiza to Formentera were subjected to a “rapid antibody test,” to determine if it had been in contact with the virus.  A CNN team making the trip on the ferry this morning were administered the mandatory test, along with all other passengers.

Spain is testing everyone travelling to the "phase 1" islands and only residents and essential workers are allowed to make the trip.

The tests are one of the measures implemented by the central government in Madrid to prevent new infections and are expected to be carried out every day, a spokesman for the Ibiza health department said.

Travelers who test positive will be stopped and required to get a PCR (polymerase chain reaction) test to check if they currently have the virus or if they had it in the past.

Following seven weeks of strict confinement since a countrywide state of emergency was declared on March 14, the process of transition in Spain will be gradual and asymmetrical, and decided by the government in conjunction with the country’s 17 regions.

Most of Spain enters "Phase 0" today, with only limited openings of some small businesses. Across Spain, masks will be mandatory on public transport as of today.

Japanese Prime Minister Shinzo Abe said in a task force meeting today that the country will extend its state of emergency until May 31.

Abe said he will review the infection status around May 14 to see if the order can be lifted beforehand.

The Japanese leader said the high vigilance and stay-at-home policy remain unchanged in 13 high-infection prefectures, while the rest of the nation will see gradual resumption of economic and social activities.

British Prime Minister Boris Johnson will say the discovery of a coronavirus vaccine is the “most urgent shared endeavor of our lifetimes” at an international pledging conference on Monday.

The UK is currently the biggest global donor in the efforts to find a vaccine, pledging £388 million ($483 million) for research, according to a Downing Street statement.

"To win this battle, we must work together to build an impregnable shield around all our people, and that can only be achieved by developing and mass producing a vaccine," Johnson will also say while co-hosting Monday’s event.
"It’s humanity against the virus -- we are in this together, and together we will prevail."

The virtual conference is aiming to raise $8 billion, and is being co-hosted by the UK, Canada, France, Germany, Italy, Japan, Norway, Saudi Arabia, and the European Commission.

The UK money allocated to funding a vaccine is part of a larger fund worth £744 million ($926 million) to “help end the pandemic and support the global economy,” the statement also said.

The UK has also pledged approximately £330 million ($411 million) annually over the next five years to Gavi, the international organisation founded by Bill and Melinda Gates, which improves access to vaccines for children in the world’s poorest counties.

"I’m not going to comment," Wallace said in an interview with BBC Radio Four on Monday, while at the same time conceding that the world "shouldn't be surprised."

Wallace went on to say he did not think it was yet the time to conduct a "post-mortem" on the pandemic.

"Let’s get through it," he said. "By me speculating or talking about China or anybody else is not going to help the fight against coronavirus."
"I genuinely think that lessons from this outbreak ought to be learned, but after the event, both the international community and indeed ourselves should then take a reflection of what the consequences are," Wallace also said.

Pope Francis today prayed for peace within family homes amid widespread social distancing restrictions around the world, as countries try to control the spread of the novel coronavirus.

In particular, the Pope spoke out against domestic violence during his daily mass at the chapel at his residence, the Casa Santa Marta.

"Today we pray for the families, in this time of quarantine. The family closed in their homes, trying to do many things, (to) be creative with children, with everybody in order to go forward," the Pope said.
"And there is also the other thing, that sometimes there is domestic violence. We pray for the families, so that they continue in peace with creativity and patience in this quarantine."

The mass was delivered with no faithful present amid ongoing social distancing restrictions.

Covid-19 has infected more than 3.5 million people worldwide and killed at least 247,000. If you're just joining us now, here are the latest developments:

The corononavirus death toll has overwhelmed health care workers, morgues, funeral homes, crematories and cemeteries. Body bags pile up across the city that became epicenter of the pandemic. 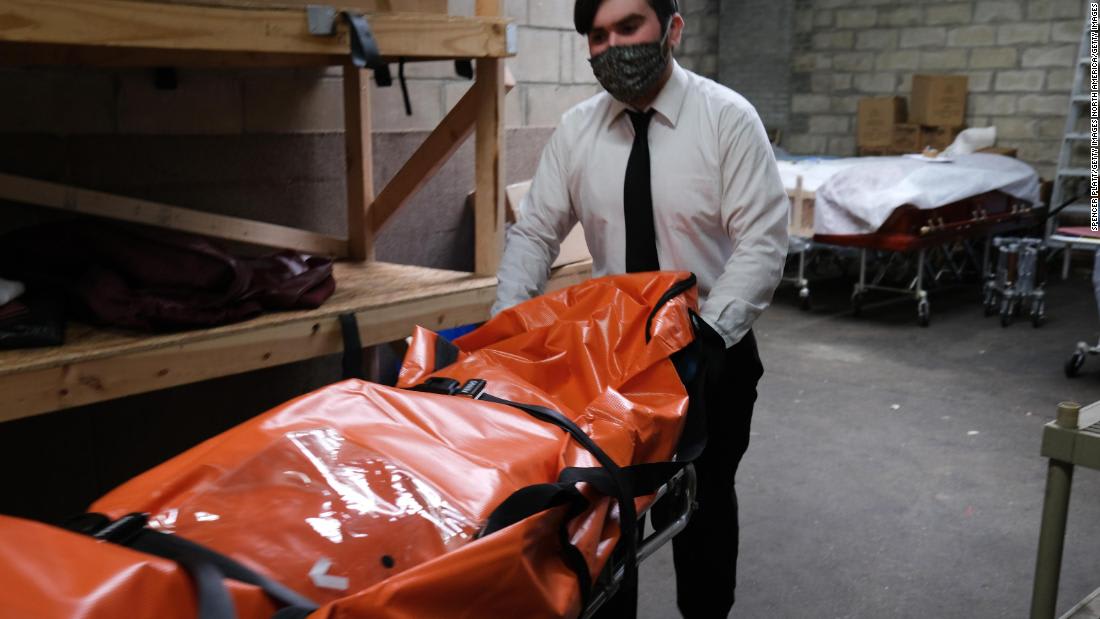 'So many more deaths than we could have ever imagined.' This is how America's largest city deals with its dead

Russia reported 10,633 new coronavirus cases on Sunday, its fourth record single-day increase in a row, in what is becoming a major headache for President Vladimir Putin.

The country's total number of cases is now 134,687, the seventh-highest number in the world, in a dramatic turnaround from the situation back in March.

A total of 1,280 deaths have now been recorded, the country's coronavirus response headquarters said in a statement, adding that around 50% of the cases were asymptomatic. Moscow, the country's worst-hit city, accounts for more than half of total cases.

Last week, Russia extended its isolation period through May 11.

"The daily increase in cases has relatively stabilized but this mustn't calm us down, the situation is still very serious," Putin said. "The peak is not behind us, we are about to face a new and grueling phase of the pandemic ... the deadly threat of the virus remains."

On Thursday, as the number of cases passed 100,000, Russian Prime Minister Mikhail Mishustin appeared on state television informing Putin by video conference that he'd tested positive for the virus. 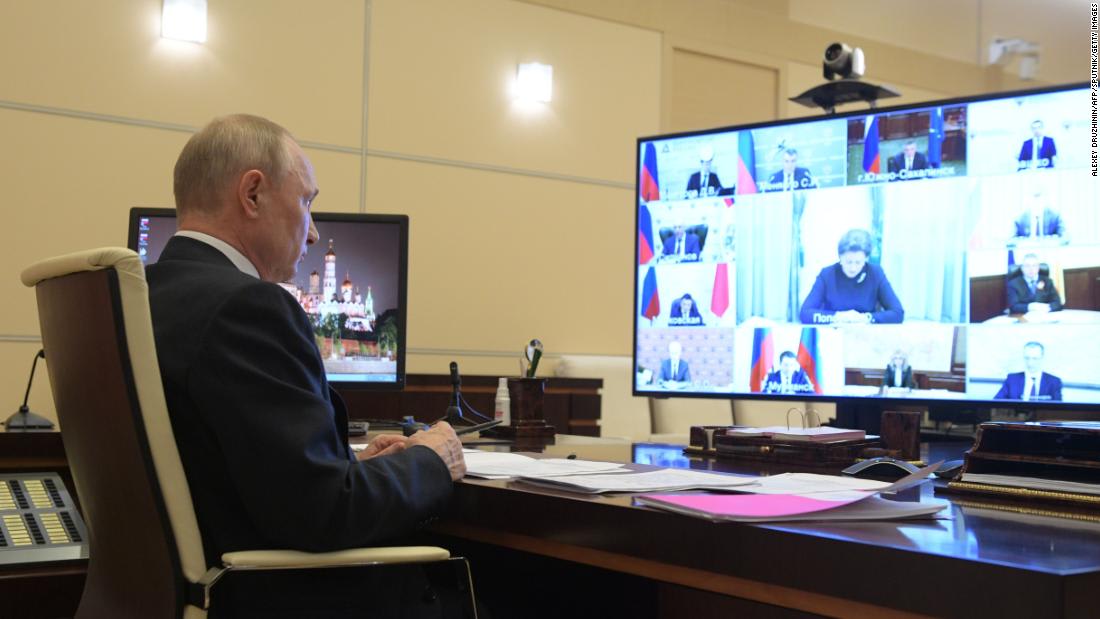 Russia adds over 10,000 cases in another record single-day increase