New Delhi authorities have imposed a 70% tax on the retail price of alcohol, referring to the levy as a "special corona fee" according to an order issued Monday by the Delhi government.

Any resident of India's capital city will have to pay the tax to purchase alcohol after social distancing measures were violated on Monday, as liquor stores reopened after five weeks.

Chaos ensued after liquor shops opened for the first time in five weeks on Monday in Delhi, with scores of people queuing up outside stores without adequate social distancing, according to a senior district official.

“It’s unfortunate that chaos was witnessed at some shops in Delhi today ... If we come to know about violations of social distancing and other norms from any area, we will then have to seal the area and revoke the relaxations there,’’ Arvind Kejriwal, the Chief Minister of Delhi said in an address on Monday.

India has been under a nationwide lockdown since March 25. The country has reported a total of 46,433 coronavirus cases, including 1,568 deaths, according to the Ministry of Health and Family Welfare.

Australian Prime Minister Scott Morrison said that the most likely origin of the coronavirus outbreak was a wildlife wet market as he called for an independent review into the origins of the pandemic.

"The most likely (origin) has been in a wildlife wet market," he said Tuesday.
"What’s really important is that we have a proper review, an independent review, which looks into the sources of these things in a transparent way so we can learn the lessons and to ensure that, were there to be a virus pandemic potential that would originate anywhere else in the world, we can learn the lessons from that," he said.
"That’s what Australia is focused on."

Two leading theories: Morrison's comments follow recent claims from the Trump administration that the novel coronavirus originated from a laboratory, despite scientists in both China and the West saying the virus likely originated in bats.

A senior official in the Office of the Director of National Intelligence (ODNI) acknowledged Monday night that the US has evidence to support both leading theories of where the Covid-19 outbreak originated.

The official also noted the outbreak "does not appear to have been purposeful.”

In a statement Thursday, the ODNI said that the "Intelligence Community also concurs with the wide scientific consensus that the Covid-19 virus was not man-made or genetically modified."

Scientists in China and the West have pointed to research indicating that the virus is likely to have originated in bats and jumped to humans from an intermediate host -- just like its cousin that caused the SARS epidemic in 2002 and 2003. 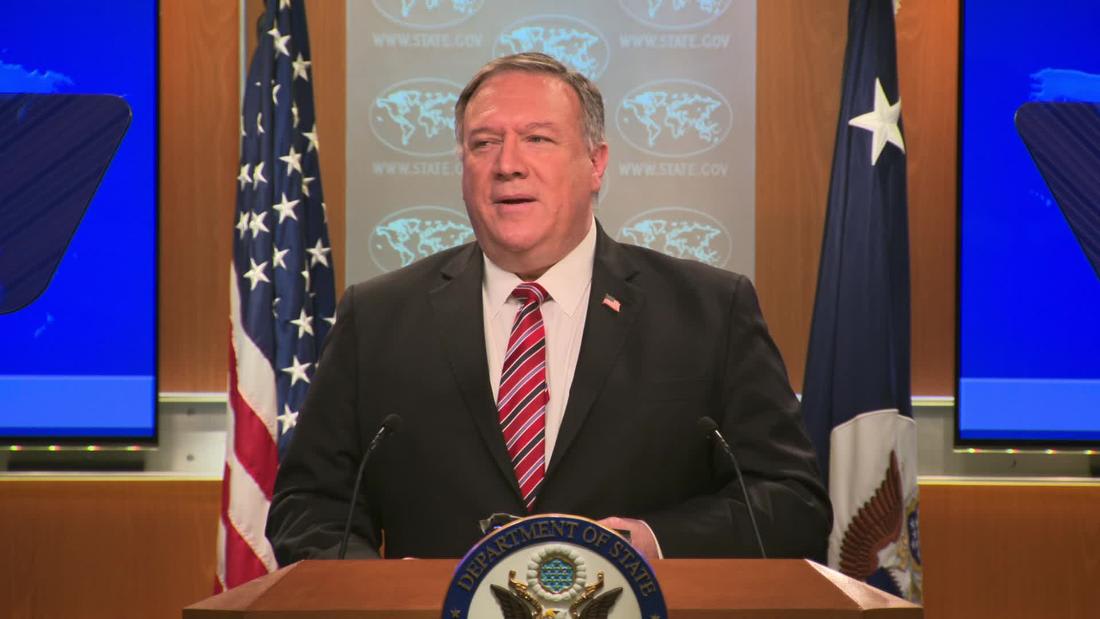 When Keisuke Arai switched to working from home during the coronavirus pandemic, he began bickering more with his long-term girlfriend.

Suspecting he wasn't alone, the Tokyo-based tourism operator wondered how couples across Japan were coping under lockdown, as they adjusted to being together 24/7 under the same roof.

On April 3, he got his answer as the hashtag #coronadivorce -- where people largely ranted about their partners -- started trending on social media.

In response, Arai's company, Kasoku, started advertising hundreds of empty vacation rentals to stressed-out couples to give them space away from each other.

"We wanted to prevent people from divorcing," says Arai. "The idea behind the vacation rentals is so that married couples can gain some much-needed time and space to think about their relationships."

As Japan scrambled to contain an uptick of coronavirus cases in April, businesses shuttered and the tourism sector was hit especially hard as travelers stayed away. As of Tuesday, 15,943 cases and 534 deaths had been recorded nationwide, according to the health ministry.

With no clear end in sight to the coronavirus pandemic or Japan's state of emergency, Arai is banking on bringing in the bucks -- and saving some relationships on the way. 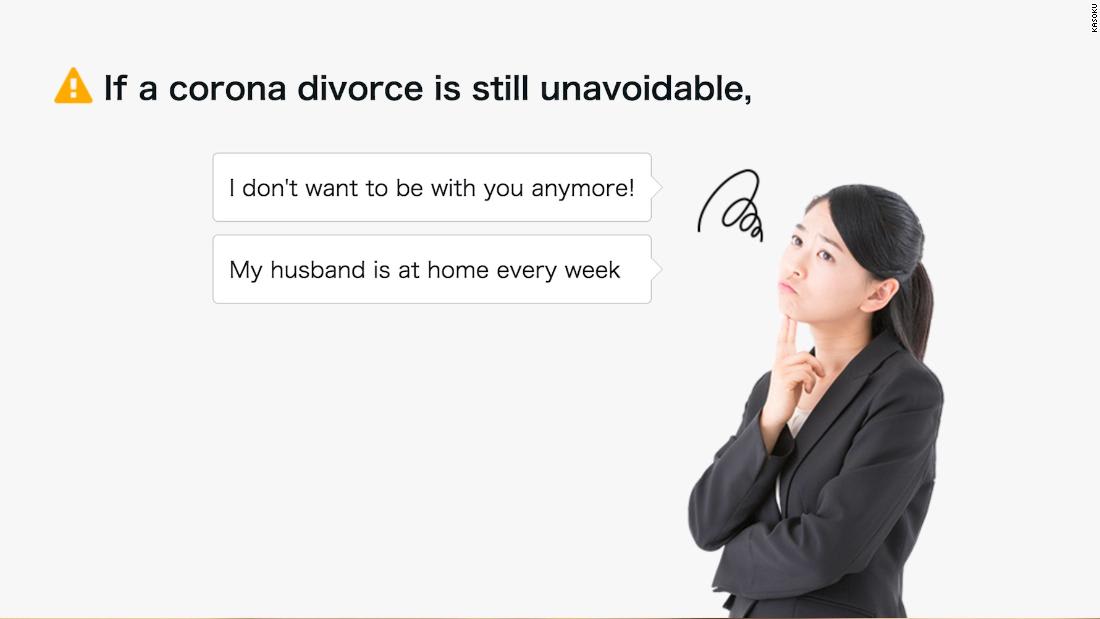 Pakistan recorded 1,315 new coronavirus cases in the past 24 hours in its largest single-day increase on record, according to the country’s health ministry.

The spike in cases comes as the ministry said testing had increased by 9,893 tests in the past day.

Country under lockdown: In a short address to the nation Monday, Prime Minister Imran Khan announced that he plans to “ease restrictions” on the ongoing national lockdown to “help the economy and daily wage earners.” Pakistan’s lockdown is scheduled to run through May 9. 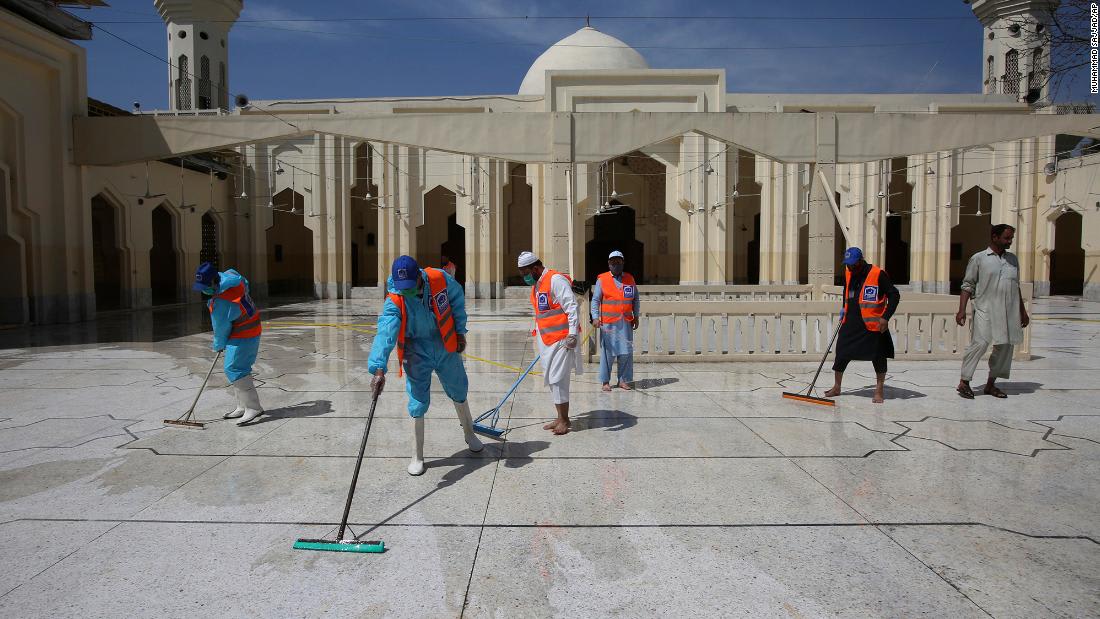 In Pakistan's fight against Covid-19, religion might not be helping

It's the first time since World War II that a New Zealand leader has attended Australia's national Cabinet meeting, according to Ardern.

According to Morrison, Ardern was invited to join the meeting to share New Zealand's experience with fighting the coronavirus.

For several weeks, the leaders have been discussing the possibility of a "travel bubble," which would allow people to travel between the two countries without quarantine restrictions.

"There is still a lot of work to be done before we can progress an idea like that, but it's obviously being floated because of the benefits it would bring," Ardern said on Tuesday.
"If we can find a way to make it work with Australia, then that would give that sense of normality, if we can make it work."

Morrison also said the bubble was "some time away."

What's the benefit of a "travel bubble"? Both countries almost completely shut their borders to foreigners in March, a huge blow to their respective tourism industries. But with both appearing to have successfully brought their coronavirus outbreaks under control, politicians are now talking about when borders could be opened to each other. 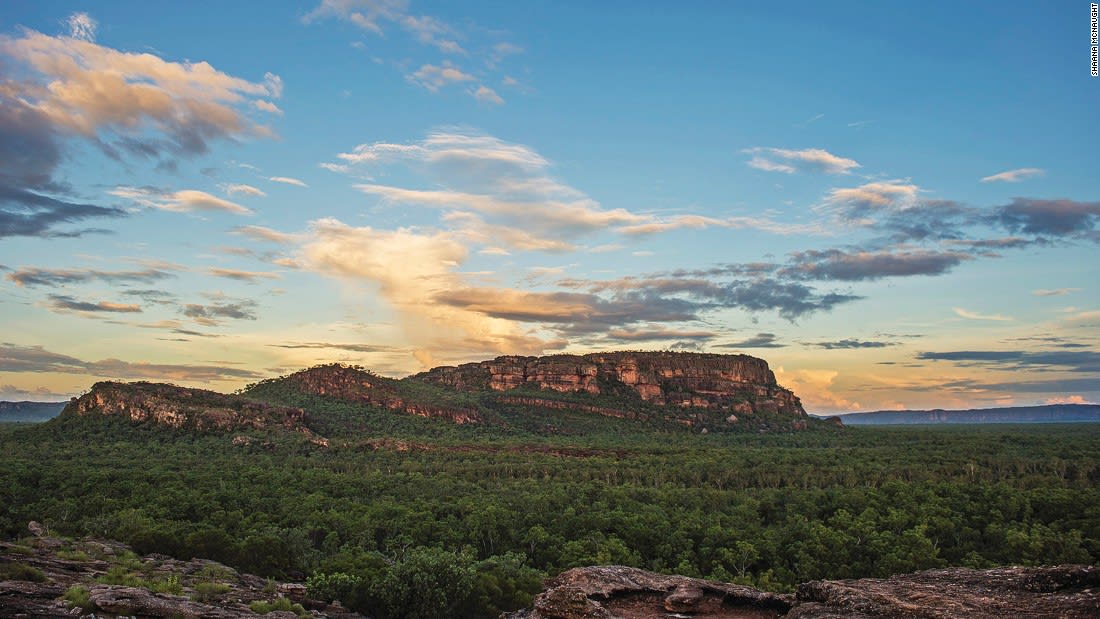 India recorded 3,900 new coronavirus cases in the past 24 hours in the country's biggest single-day spike, according to the Ministry of Health and Family Welfare.

Prior to today, India's highest single day jump in numbers was 2,644 cases in 24 hours, recorded on May 3.

According to the Indian Council of Medical Research, the country has now conducted more than 1,190,000 coronavirus tests.

Slum cases rise: The total number of cases of coronavirus in Mumbai's Dharavi, one of Asia's largest slums, stands at 632, including 20 deaths, as of 7 p.m. local time Monday.

On Monday, 42 new cases of coronavirus were reported. The slum saw the highest single-day jump on Sunday with 94 cases, including two deaths, according to Kiran Dighavkar, a senior municipality official.

Dharavi has undertaken a massive screening drive to identify cases.

Some 350 private clinics have been set up to screen residents and refer them to the municipal body for isolation when necessary. As of April 29, 70,000 people had been screened, Dighavkar tweeted.

Millions of people across Europe were returning to some semblance of their former lives Monday as more countries across the continent began to reopen after weeks or months of coronavirus-related lockdowns.

What's going on around Europe:

Italy: "Phase 2" of Italy's plan to ease restrictions began Monday, with more than 4 million people expected to return to work, some public transport services restored, and many businesses set to reopen, Italy's Prime Minister Giuseppe Conte announced on Facebook. Although industries such as textiles and manufacturing are restarting, many non-essential stores remain closed. While bars and restaurants were allowed to reopen from Monday, they can only offer takeaway.

Germany: German hairdressers opened Monday after weeks of shutdown, but customers are not able to walk in -- they now need an appointment and in Berlin have to fill out a questionnaire. One salon in Hamburg said it was "overrun" by customers, while Udo Walz, a hairdresser to the stars in Berlin, told CNN his salons were booked out for the next three weeks.

Greece: Traffic increased on Greek streets Monday as small stores including hair salons, flower shops and bookstores reopened and lines formed outside electrical appliance retailers, Reuters reported. Greece, which has been praised for its coronavirus response, is planning to welcome tourists again this summer.

United Kingdom: The UK, meanwhile, has not relaxed restrictions yet but is also making plans for returning to work. A draft government plan is looking at staggered starts, maximizing work from home and hygiene measures such as two-meter distancing and physical screens, according to British media reports. 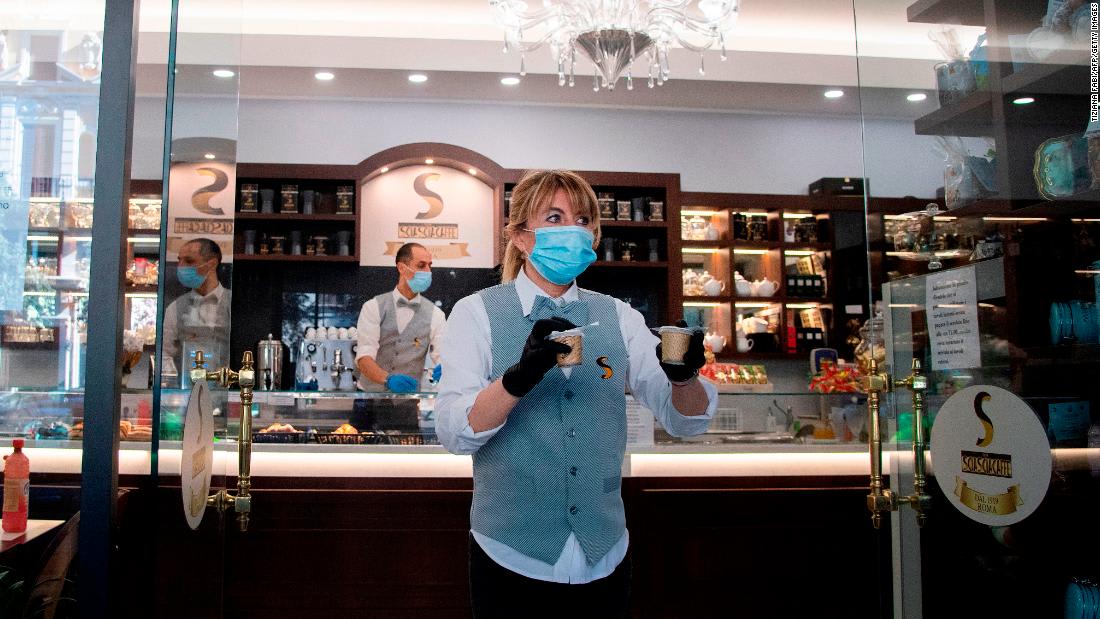 Europe is in a new phase of reopening, but it's hardly a return to normal

A man accused of shoving an Austin, Texas, park ranger into the water while the ranger was explaining to a crowd the need for social distancing is embarrassed by his actions, his lawyer said.

A video that gained attention after it was posted on social media includes the moment a young man pushes the ranger into a lake at Commons Ford Ranch Metro Park last Thursday afternoon.

According to an arrest affidavit, ranger Cassidy Stillwell was talking to a crowd of people, described as "unlawfully drinking and smoking," on a dock near Lake Austin. It's unclear from the affidavit whether Hicks was part of that group mentioned in the affidavit.

Amid the cross talk in the video, Stillwell is heard telling the crowd on the dock to "disperse yourselves" in the grassy area nearby because they were not maintaining physical distance of six feet. Some respond with "Will do" and "I got you, man."

The ranger's instructions are interrupted when the man pushes him into the shallow, murky water. The ranger holds on to the man's arm and pulls him in, the video shows. The man, clad in a swimsuit, scrambles out of the water and rushes away.

Attorney Mark Hull told CNN in a statement Monday he looks forward to telling Hicks' side of the story.

"He is embarrassed about his actions and has the utmost respect for law enforcement, particularly during these unprecedented times," Hull said.

Texas has reported at least 32,781 coronavirus cases, including 901 deaths, according to Johns Hopkins University.

Los Angeles is still 80% short of its goal to provide 15,000 hotel rooms for its homeless population, a month after the county announced the initiative.

On April 8, Los Angeles County launched “Project Roomkey,” a partnership between the state, county, and the Los Angeles Homeless Services Authority to secure hotel and motel rooms to be used as temporary shelters to prevent the spread of the coronavirus during the pandemic.

“Project Roomkey aims to not only protect high-risk individuals, but to also prevent the spread of the deadly virus in our communities and protect the capacity of our fragile hospitals and healthcare system,” the county said.

While the goal was to secure 15,000 rooms with state and federal funding, the latest news release from LA County shows that only 2,711 rooms have been secured.

“To date, we have 30 properties with 2,711 rooms that will be made available to the most vulnerable. As rooms become operational, vulnerable residents are moving in every day,” said a LA County spokesperson.

On LA's Skid Row -- the nation's biggest concentration of homeless people --100 coronavirus infections have been confirmed, a shelter executive told CNN on Monday. The growing number of infections have raised fears of an outbreak among the city’s homeless community. The county has a homeless population of about 60,000 people.

In a news conference on Monday, Mayor Eric Garcetti announced that the city secured a large hotel in downtown LA, providing 460 more rooms.

The county now has a total of 3,171 rooms with the new addition, which is roughly 20% of its goal.

A LA County spokesperson says negotiations with hotel and motel owners are ongoing.

“We believe that this urgent humanitarian initiative is housing more people more quickly than ever before in our region’s history,” LA County said in a statement.

California has reported at least 55,884 coronavirus cases, including 2,278 deaths, according to Johns Hopkins University.