Ian Haydon, a 29-year-old living in the Seattle area, joined CNN's global town hall to explain what motivated him to participate in a vaccine trial for the virus.

Haydon said he was one of 45 healthy people selected to participate in the phase 1 trial after thousands volunteered.

He said he was just trying to do his part to stop the virus' spread.

"My motivation for wanting to participate in this trial is pretty simple: this is one way that I can help out, and I'm very fortunate to be in good health. If stepping up can speed up a vaccine, that seems like the right thing to do," he said.
"The weight of the world is on these vaccines right now. No one knows if this is going to be the one. But I think the people involved in the study clearly know they’re involved with something historical here."

Dr. Deborah Birx, a White House coronavirus task force official, hopes that the United States will have conducted more than 8 million tests for the virus before the end of the week.

"I think I've been very encouraged about two parts of the testing. One, the dramatic increase and the number of tests we're doing per week. We hope this week to get closer, over 8 million. We're going up. We're about 2.5% of all Americans having been tested. That is increasing by half a percent every week so we can get close to other countries and their 3%," Birx said.

Dr. Deborah Birx, a member of the White House coronavirus task force, said on CNN's global town hall that the Trump administration was still in the editing process regarding a draft recommendation from the Centers for Disease Control and Prevention on how to reopen the United States after the coronavirus pandemic.

"We're working with the CDC on a whole series of products," she said. "Those are still being worked on. No one has stopped those guidelines. We're still in editing."

A senior CDC official told CNN Thursday that the Trump administration would not implement the 17-page recommendation.

"We are used to dealing with a White House that asks for things and then chaos ensues. A team of people at the CDC spent innumerable hours in response to an ask from Debbie Birx," the official said.

Birx said that the decision was made not to implement the recommendation because the editing process had not been completed.

"It was more about simplification to make sure to make sure that American people as well as public health officials understand the guidelines," she said.

Birx said that they were also devoting special attention to "surveillance for asymptomatic individuals."

"That was a very new element that we really felt very strongly had to be included because of the ever-increasing evidence of asymptomatic spread," she said.

The novel coronavirus could kill as many as 190,000 people in Africa during the first year of the pandemic if containment measures fail, the World Health Organization warned on Thursday.

“While Covid-19 likely won’t spread as exponentially in Africa as it has elsewhere in the world, it likely will smoulder in transmission hotspots,” Dr. Matshidiso Moeti, the WHO Regional Director for Africa, said in a statement.
“Covid-19 could become a fixture in our lives for the next several years unless a proactive approach is taken by many governments in the region. We need to test, trace, isolate and treat.”

The WHO predicted that between 29 million to 44 million Africans could be infected in the first year. As many as 5.5 million of these people could require hospital treatment, a number that would overwhelm the medical capacity of most places on the continent.

A survey done in March of health services in Africa found an average of nine intensive care unit beds per 1 million people in 47 African countries.

“These would be woefully inadequate,” the WHO said.

A total of 44 US states are expected to partially reopen by Sunday -- nearly the entire country.

But the coronavirus crisis isn't getting better everywhere. There are signs of improvement in 16 states -- but the situation is deteriorating in many more ...

Things are getting better in states like Montana, New York, and Colorado. In these places, some schools are starting to reopen as new daily cases plateau or drop.

But things are getting worse in places like Minnesota and Puerto Rico, where cases were up 50% between last week and the week before. States like Texas and Washington aren't as hard hit, but cases are still increasing by 10% to 50% week-on-week. Only a few states -- like California and Florida -- are holding steady. 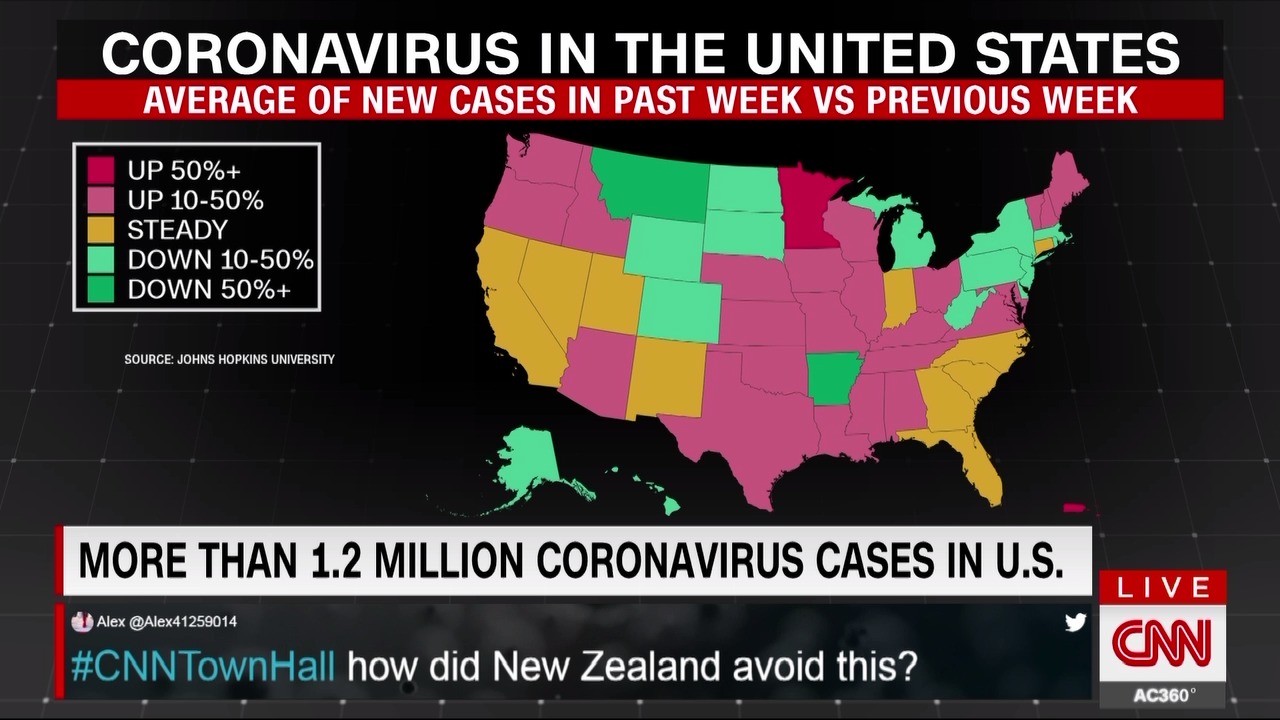 How to watch: The town hall will air on CNN, CNN International and CNN en Español. It will stream live on CNN.com's homepage and across mobile devices via CNN's apps, without requiring a cable log-in. You can also watch on CNNgo, and subscribers to cable/satellite systems can watch it on-demand.

We'll also be covering it with live updates here.

The Dalai Lama will hold his first spiritual teaching in mid-May after suspending it in February due to the coronavirus pandemic.

The Dalai Lama's office announced on Wednesday that the Tibetan leader will hold public teaching on May 16 and 17, but via live webcast.

“At the request of individuals and groups from around the world, His Holiness the Dalai Lama has graciously consented to give a two-day teaching," according to the announcement.

The Dalai Lama canceled all his public engagements “until further notice” on February 12 after his personal physician and others advised him to due to the coronavirus outbreak. He has not made any public appearances since late January.

The exiled Tibetan spiritual leader in a statement on Sunday called for a “coordinated, global response” to fight the pandemic, and urged people to focus on "what unites us as members of one human family."

If you're just turning in, here is the latest on the coronavirus pandemic across the globe:

Canada is sending hundreds more troops to long-term care centers in Quebec and Ontario as coronavirus outbreaks contribute to a growing crisis in seniors’ homes.

Despite efforts to shore up staffing and improve conditions, there are still hundreds of outbreaks at seniors’ centers across Canada with dozens of deaths reported daily.

Canadian Defense Minister Harjit Sajjan said more than 1,600 soldiers would be deployed by next week, the majority to centers in the Montreal area.

'We're all in and going as quickly as we can," Defense Minister Harjit Sajjan said today during a press conference from Ottawa.

"This is not a typical Canadian Armed Forces operation," Sajjan added, echoing the words of Canadian Prime Minister Justin Trudeau who last month said soldiers should not be taking care of seniors.

But Trudeau added that for now, Canada has no choice but to do just that as the crisis in seniors’ homes continues. Nearly four in every five Canadians who have died of Covid-19 have been residents of long-term care facilities.

Canadian military commanders say they have ‘stripped’ armed forces bases across the country of military medical personnel. They will be supported by other military staffers for logistics and operations requirements.

Canada’s top public health official warned this week that deaths would continue to rise even though the epidemic has been slowing in Canada with only hundreds of new cases per day outside of long term care homes.

“We know that the doubling time is now probably around 20 days so the epidemic itself is decelerating. But unfortunately and tragically what’s happening right now is that those who have been infected are coming to the end of their clinical outcome. With so many long term care facilities affected I think that the number of deaths will continue to increase,” said Dr. Theresa Tam, Canada’s Chief Public Officer.