South Korean authorities have identified another 12 locally transmitted infections of Covid-19 linked to nightclubs in the capital Seoul.

Authorities are particularly worried that the virus was widely transmitted when people started returning to the bars and clubs of the Itaewon nightlife district from the end of April.

A total of 131 positive cases have emerged in this cluster since May 6, according to the South Korean Centers for Disease Control and Prevention (KCDC). The KCDC has conducted 35,000 tests -- 15,000 alone on Wednesday -- in an attempt to quickly trace and contain this outbreak.

Anonymous testing: The government is urging citizens who visited the area from April 24 through May 6 to get tested and is allowing people to remain anonymous. Some of the clubs where the virus spread are frequented by members of South Korea's LGBT community, which sparked a backlash against gay people in local media and lead some to fear they would be outed.

The government of the local city of Incheon, which borders Seoul, said that 14 of the 131 cases are linked to one private academy instructor who visited clubs in Itaewon. The patient initially hid his movement but his GPS location tracking revealed his place of work in Incheon, a city bordering Seoul.

Vice Health Minister Kim Gang-lip said earlier that Incheon city announced it would pursue legal action against the tutor and if found guilty, he could be punished with up to two years in prison.

A total of 10,991 infections and 260 deaths have now been reported in the country, according to the Johns Hopkins University tally. The KCDC said Thursday that 29 cases were identified in the previous 24 hours, 26 of which were locally transmitted.

Read more about how the club outbreak stoked homophobia: 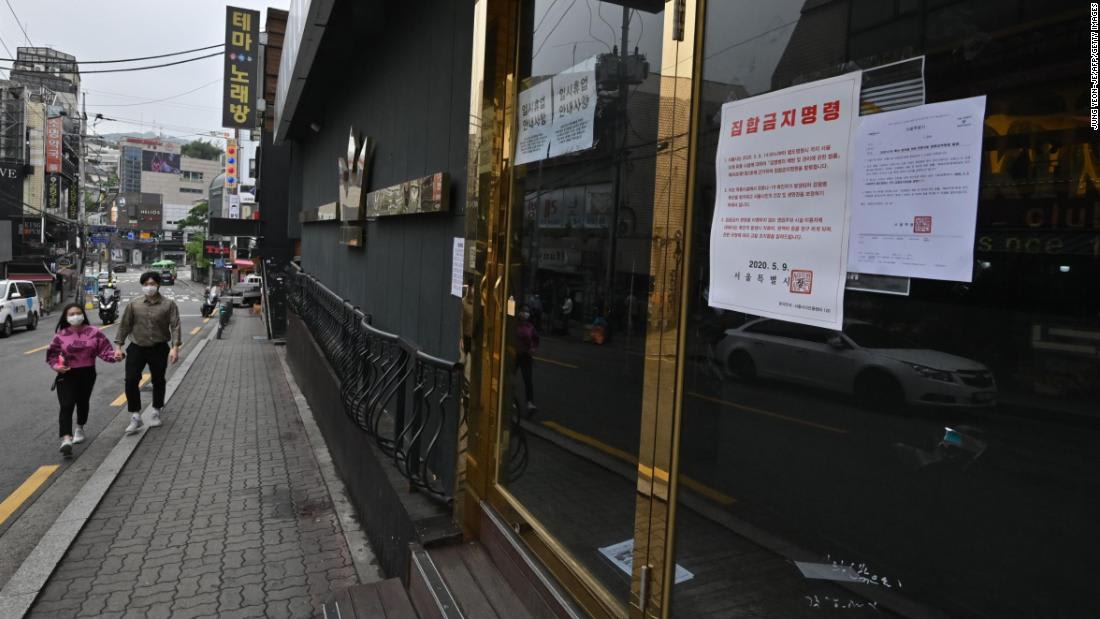 At least 21,030 new coronavirus cases and 1,763 deaths were reported in the United States on Wednesday, according to Johns Hopkins University.

That brings the country's total to at least 1,390,406 recorded infections and 84,119 fatalities as a result of contracting the virus.

A viral video from Japan aims to show how easily germs and viruses can spread in restaurants when just one person is infected.

The experiment simulates the atmosphere at a buffet restaurant or on a cruise ship. It was conducted by the public broadcasting organization NHK in conjunction with health experts.

The video shows 10 people coming into the restaurant, with one singled out as the "infected" person. Each participant goes about the buffet as they normally would, not considering a potential contamination.

At the end of the video, the participants are cast under black lights illuminating where the "infection" has spread.

The substance, used to signify the germs, can be seen on food, serving utensils and platters, and even on the faces of some of the participants. 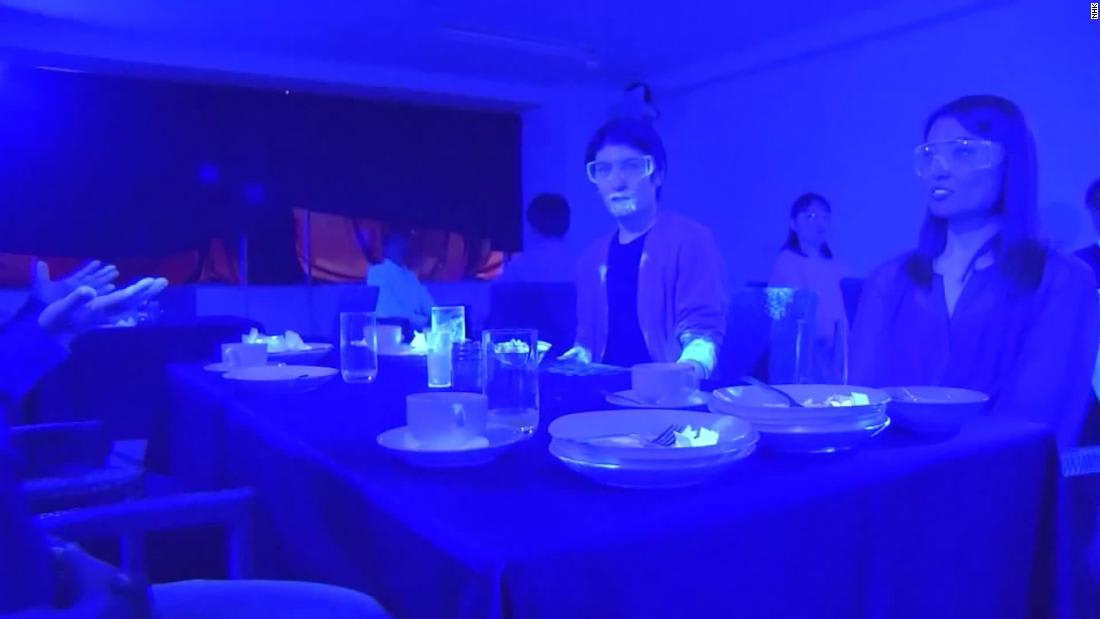 One of the cases was found in Jilin province, which has been under partial lockdown since a new cluster of infections emerged over the weekend. The other two cases were reported in neighboring Liaoning province.

Passengers may not be cruising the oceans, but around 61,100 crew members are currently stuck onboard 91 cruise ships in US waters and ports, according to the Coast Guard.

Many cruise ships are stuck due to regulations imposed by the US Centers for Disease Control and Prevention following outbreaks that occurred on ships.

Read more about how the pandemic is affecting cruise ship employees: 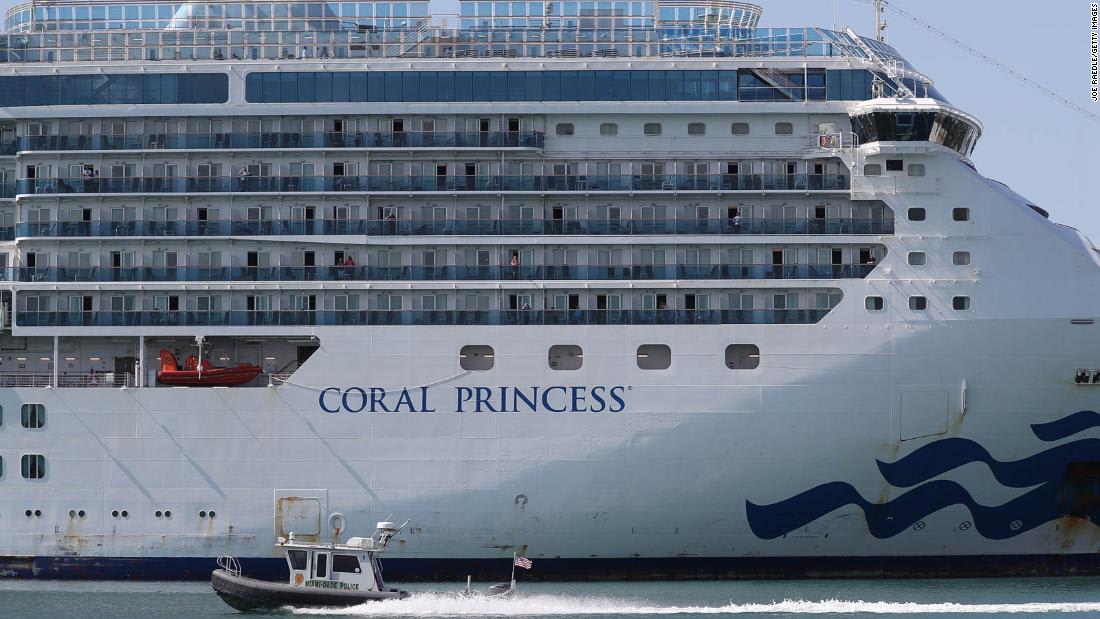 Cruise passengers have gone home, but the crews that looked after them are still stuck at sea

The coronavirus pandemic has been tied to an increased incidence of an inflammatory syndrome among children in Italy in a new study, and the researchers warn that similar outbreaks of this rare but serious illness can be expected in other nations.

The study, published in the medical journal The Lancet on Wednesday, found cases of the syndrome appeared to increase 30-fold in the Bergamo province of Italy shortly after the coronavirus pandemic spread to the region.

The syndrome, now frequently referred to as multisystem inflammatory syndrome in children, resembles another childhood condition known as Kawasaki disease.

Dr. Lucio Verdoni of the Hospital Papa Giovanni XXIII in Bergamo and colleagues studied the cases of children diagnosed with Kawasaki disease at the hospital between January 1, 2015 and April 20, 2020.

The data showed that the incidence rate of Kawasaki disease diagnoses was about 0.3 per month before the coronavirus pandemic, and then 10 per month afterwards between March and April of this year -- a very large increase.

"Outbreaks of Kawasaki-like disease might occur in countries affected by the SARS-CoV-2 pandemic, and might present outside the classic Kawasaki disease phenotype," the researchers wrote in the study.
"This condition might be serious and requires prompt and more aggressive management," they added. "Future research on the cause of Kawasaki disease and similar syndromes should focus on immune responses to viral triggers."

Dr. Jeffrey Burns of Boston Children’s Hospital and other experts told CNN Wednesday that the condition appears to be a post-viral syndrome that may develop several weeks after a Covid-19 infection.

The Chilean health ministry said that 2,660 new cases of novel coronavirus were recorded by authorities inside the country on Wednesday -- the highest number in a single day since the pandemic began.

A total of 34,381 people have been infected by the virus in Chile, 346 of whom have died, according to the ministry.

Chilean health minister Jaime Mañalich said that the spike prompted authorities to place the capital of Santiago and some of its surrounding areas under a seven-day mandatory quarantine, which President Sebastian Piñera said will start Friday.

Additionally, all press staff assigned to the Presidential palace of La Moneda will be completing a preventive 14-day stay-at-home order, after a member of the media tested positive for coronavirus, Piñera's office said on Wednesday.

The novel coronavirus has infected more than 4.3 million people worldwide, bringing countries to a standstill. Here are the latest headlines:

Parents, hospitals and clinics should expect to see more cases of a mystifying condition that seems to be affecting children after a bout with Covid-19, doctors said Wednesday.

The condition, called multisystem inflammatory syndrome in children, appears to be a post-viral syndrome, said Dr. Jeffrey Burns, a critical care specialist at Boston Children’s Hospital who has been coordinating a global group of doctors who compare notes on the condition.

It has affected at least 100 children in the United States, most of them in New York. But doctors in Kentucky, Massachusetts, Michigan and elsewhere have also reported cases.

“This multisystem inflammatory syndrome is not directly caused by the virus,” Burns said. “The leading hypothesis is that it is due to the immune response of the patient.”

Symptoms include: Persistent fever, inflammation and poor function in organs such as the kidneys or heart. Children may also show evidence of blood vessel inflammation, such as red eyes, a bright red tongue and cracked lips.

Not all of the affected children have tested positive for the coronavirus, but reports from Europe and from several cities in the United States show a link.

“There seems to be delayed responses to Covid infections in these kids,” said Dr. Moshe Arditi, a pediatric infectious diseases expert at Cedars-Sinai Medical Center in Los Angeles.

Burns believes more cases will turn up as Covid-19 affects more people. It’s a rare condition, but rare consequences of viral infections are seen more often when millions of people are infected.

“We can expect that each of the epicenters will see clusters of these emerging roughly four to six weeks later,” Burns said.

Most children are not seriously affected by the syndrome, Burns said. Most don’t even need treatment in the intensive care unit, he said, although a small number have died. “We do have proven treatments that we can use and are using,” he said. They include blood thinners and immune modulators.

The US Centers for Disease Control and Prevention is preparing a Health Alert Network notification to send to doctors across the country, an agency spokesman confirmed. Burns said the World Health Organization is also working to define the syndrome and alert doctors so they will know what to look for and how to treat it.

While the syndrome has features in common with Kawasaki disease and toxic shock syndrome, it’s different, Burns and Arditi both said. It will be important to study, because the response could help explain why children are so much less likely to be severely affected by Covid-19 than adults are.

“Understanding the child’s immune response could be a key to vaccine development and could also be a key to therapy for adults to understand why children are able to fight (Covid-19) off so well,” Burns said.