The Czech government has lifted the country's coronavirus state of emergency, which had been in place since March 12.

Some restrictions will, however, remain:

The Czech Republic has so far recorded 8,475 coronavirus cases, with 298 deaths, according to the country’s health ministry.

Taiwan has said it will postpone its bid to join the World Health Organization, after the secretariat did not invite the island to attend the World Health Assembly, which takes place Monday, according to the island’s Foreign Minister Joesph Wu.

"After careful deliberation, we have accepted the suggestion from our allies and like-minded nations to wait until the resumed session before further promoting our bid," Wu said at a press conference on Monday.
Wu noted that the length of the meeting had been shortened this year due to Covid-19 and that "understandably, countries want to use the limited time available to concentrate on ways of containing the pandemic."

"Deep regret": He added that "the Ministry of Foreign Affairs expresses deep regret and strong dissatisfaction that the World Health Organization Secretariat has yielded to pressure from the Chinese government and continues to disregard the right to health of the 23 million people of Taiwan."

Taiwan said 29 countries had "expressed support for Taiwan’s WHO participation" with officials including Japan’s Prime Minister Shinzo Abe, US Secretary of State Mike Pompeo and New Zealand Foreign Minister Winston Peters speaking out for the island.

"Our actions speak for themselves—Taiwan can help, and Taiwan is helping," said Wu, adding that Taiwan "took the initiative to provide epidemic prevention and containment supplies to countries in need."

Taiwan says it will continue its bid to join the World Health Organization "later this year when meetings will be conducted normally, to make sure there will be full and open discussion."

There are at least 1,486,742 cases of coronavirus in the US, according to Johns Hopkins University's tally of cases in the United States, and at least 89,564 people have died in the US from the virus.

The UK is likely missing between 50,000-70,000 Covid-19 cases because it has not updated its list of coronavirus symptoms, a professor who leads the Kings College London Covid Symptom Tracker app said Monday.

Professor Tim Spector told BBC Radio 4's Today programme that his team's app has listed "about 14 symptoms which [they] know are related to having a positive swab test and these are not being picked up by the NHS." These include symptoms such as the loss of smell and taste and severe muscle pain and fatigue.

Professor Spector said the app is the "largest source of data" in the UK, with more than 1.5 million signed up to offer information about their response to the virus.

Citizens in the dark about symptoms: He said that UK citizens are not aware of the full spectrum of symptoms due to the lack of testing and the advice to only self-isolate if they have a high-fever or cough.

"There's no point telling people to be alert if they don't know the symptoms," he added.

Other countries expand lists: Professor Spector noted 17 other countries, the WHO, the EU and even the CDC altered and expanded their list of symptoms a few weeks ago.

Since the UK began testing, 243,695 people have tested positive for the virus, according to the latest figures from the Department of Health and Social Care.

Spector advised that "Public Health England ... get in line with the rest of the world and make people more aware."

He estimated that there are 100,000 cases of infected people in the UK at present and stressed that "there are still people out there who can infect others and we do have to be very vigilant," as some parts of the UK begin to ease their lockdown.

Some 69 out of 209 employees at an agricultural producer near St. Brieuc in northwestern France have tested positive for coronavirus following a mass screening, according to the local health authority.

An employee at the unnamed factory in Brittany was admitted to the local hospital on May 13, the health authority says.

Meanwhile, 34 employees have tested positive for coronavirus at the Tradival slaughterhouse in Fleury-les-Aubrays south of Paris, according to the local health authority.

News of the two clusters of cases comes as France enters its second week of "deconfinement," as the measures which had seen people confined to their homes, only allowed to leave when carrying a form justifying their movements, are relaxed.

On Sunday, Singapore reported 682 cases. The Ministry of Health said the lower number of cases today is due to "fewer tests being processed as one testing laboratory is reviewing its processes following an earlier apparatus calibration issue."

Singapore has a total of 28,343 reported cases and 22 deaths, according to the Johns Hopkins University tally.

Making up a significant portion of the Singaporean workforce, 1.4 million migrant workers live in the city-state, mostly employed in construction, manual labor and housekeeping. Of these, about 200,000 live in 43 dormitories, according to Minister of Manpower Josephine Teo.

Read more about the plight of Singapore's migrant workers: 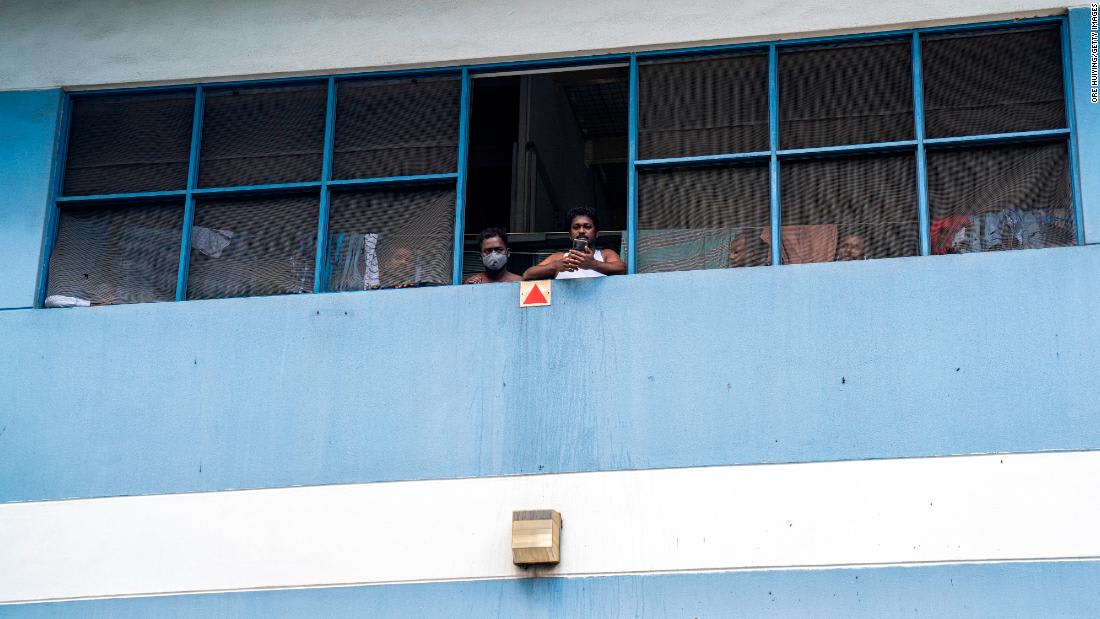 Tens of thousands of Singapore's migrant workers are infected. The rest are stuck in their dorms as the country opens up

The Chinese city of Wuhan has conducted more than 400,000 nucleic acids tests within the first three days of a citywide campaign to test all residents for Covid-19, the Wuhan Municipal Health Commission said today.

The testing drive comes after several new local cases were reported this month, sparking concern that the coronavirus could still be spreading in the city of 11 million people, where the virus emerged at the end of last year.

Who is being tested? The Wuhan government said that the citywide tests will apply to most permanent and temporary residents who were never tested before, and will exclude children under the age of 6.

How will it work? The tests are conducted free of charge, and only those who test positive will be notified by authorities, the local government said. All samples will be stored in a secure and independent server to safeguard privacy, authorities added.

Last Thursday, leading Chinese business publication Caixin reported that Wuhan will carry out the citywide testing in waves. Over a period of 10 days, each district will stagger their tests in an effort to prevent a resurgence of the virus.

The Acropolis in Athens reopened for visitors today after temporarily closing due to the coronavirus outbreak.

More than 200 archaeological sites in the country will resume business today, according to the Greek Ministry of Culture.

They are the first cultural sites to return to normal operations, followed by open-air cinemas on June 1, museums on June 15 and art events on July 15, Culture Minister Lina Mendoni said.

The sites will operate from 8 a.m. to 8 p.m. local time with safety measures, according to the instructions of the country's National Public Health Organisation.

These include keeping a distance of 1.5 meters (5 feet) between people and ensuring a maximum number of visitors per archaeological site.

There will also be special rules for sanitary facilities, while mask wearing and the use of hand sanitizer are recommended.