Denmark is accelerating its reopening by loosening border restrictions, allowing some schools to resume classes, and reopening other public spaces ahead of schedule.

The move was announced by the Danish government in a news release overnight, following hours of negotiations with parliamentary leaders.

Denmark is now starting phase 2 of reopening: This includes opening cultural activities such as museums, theaters, movie theaters, and zoos, which were previously scheduled to reopen June 8.

Starting next Monday, border restrictions will be eased to allow foreigners who own a summerhouse in Denmark to visit, as well as foreigners with a Danish partner or relative.

On Wednesday, high-school students will be allowed to return to school. Other spaces like amusement parks, adult education centers, and various recreational classes will also reopen.

To mitigate the risks of reopening, areas considered high risk -- like nightclubs and pools -- will remain closed.

Dip in hospitalizations: The government gave no clear explanation for the accelerated opening but the country has seen a steady decline in the number of hospitalizations due to Covid-19.

The government noted that appropriate restrictions can be reintroduced if virus transmissions begin to resurge.

Plot 87 occupies a barren corner of Milan's austere main cemetery. Here, the soil has been freshly turned to make new graves, 120 in all, the morning we visited. Another body was to be buried that afternoon.

Here lie those who succumbed to coronavirus in Milan, but whose bodies have yet to be claimed.

With morgues filled to capacity, and more dying each day at the peak of the outbreak, authorities in Italy's coronavirus hotspots had little choice but to bury the unclaimed dead like this. If their families come forward to claim the bodies once the epidemic is over, the remains will be exhumed and reburied.

At least 15 facilities have been closed and their patients relocated after inspections by the Italian Police health force found that many failed to follow coronavirus protocols, including providing enough protective equipment for staff and dedicated quarantine areas for suspected coronavirus patients.

In the hard-hit town of Nembro, in the foothills of the Alps, is Nembro Nursing Home Foundation. Of 87 residents there, 34 died of the virus. 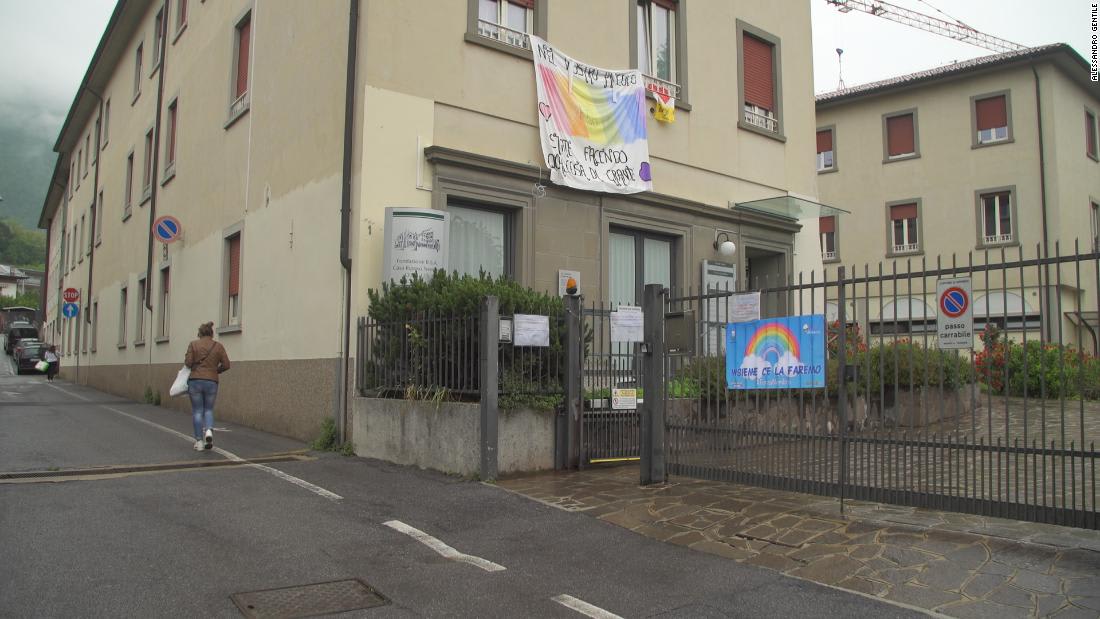 UK-based airline EasyJet will restart a “small number” of flights starting June 15, it announced in a statement.

The initial schedule will mainly be made up of domestic flights in the UK and France.

“These are small and carefully planned steps that we are taking to gradually resume operations,” EasyJet CEO Johan Lundgren said in a statement.
“We will continue to closely monitor the situation across Europe so that when more restrictions are lifted the schedule will continue to build over time to match demand, while also ensuring we are operating efficiently and on routes that our customers want.”

New rules will be in place when flights resume, including mandatory face masks for all passengers, cabin crew and ground staff. The airline also says that initially, there will be no onboard food service.

Suspended operations: The airline grounded all 334 of its planes in Europe in March as a result of travel restrictions across the region due to the pandemic.

Before the pandemic, it operated about 2,000 flights a day on more than 1,000 routes across 36 countries, mostly in Europe.

A man in Singapore was sentenced to death for drug trafficking last week via a call on the Zoom videoconferencing app as the country's courts hold sessions remotely due to coronavirus restrictions.

Punithan Genasan, a 37-year-old from Malaysia, received the death sentence last Friday after being found complicit in trafficking 28.5 grams of heroin in 2011, according to Singapore’s Supreme Court.

The court described him as "the mastermind behind the drug transaction."

Genasan's legal representatives confirmed to CNN that the sentencing had been handed down through a Zoom call.

“In line with measures to minimize the further spread of Covid-19, the courts have been conducting hearings, including hearings on criminal matters remotely," said a Supreme Court spokesperson. "It was the first criminal case where a death sentence was pronounced by remote hearing in Singapore.”

Singapore on lockdown: Many public facilities in Singapore remain closed, although the city-state is slowly entering a phased resumption of business.

Singapore has reported at least 29,364 confirmed Covid-19 cases and 22 deaths, according to Johns Hopkins University.

Thousands of people have been left homeless in the wake of Cyclone Amphan, which slammed into India's eastern coast on Wednesday afternoon, as authorities race to provide relief efforts in communities already stricken by the coronavirus.

Amphan, which was the most powerful cyclone ever recorded in the Bay of Bengal before it weakened, ripped apart homes, tore down trees, washed away bridges and left large predominately rural areas without power or communications.

Large-scale evacuation efforts throughout India and neighboring Bangladesh appear to have saved many lives, but it could take days to realize the full extent of the deaths, injuries and damage from the cyclone.

Cyclone Amphan is a disaster bigger than the coronavirus outbreak, said Mamata Banerjee, the chief minister of India's West Bengal state on Wednesday.

The virus, which continues to spread through both countries, has complicated the emergency response, as relief teams grapple with how to get people to safety while also protecting them against the risk of Covid-19.

Pradeep Jena, special relief commissioner for Odisha state, said emergency services had to balance saving lives from the cyclone with saving lives from the coronavirus. In evacuation centers, Jena said they were trying to keep the elderly and pregnant women separate from the rest of the population and were working hard to obtain adequate soap. 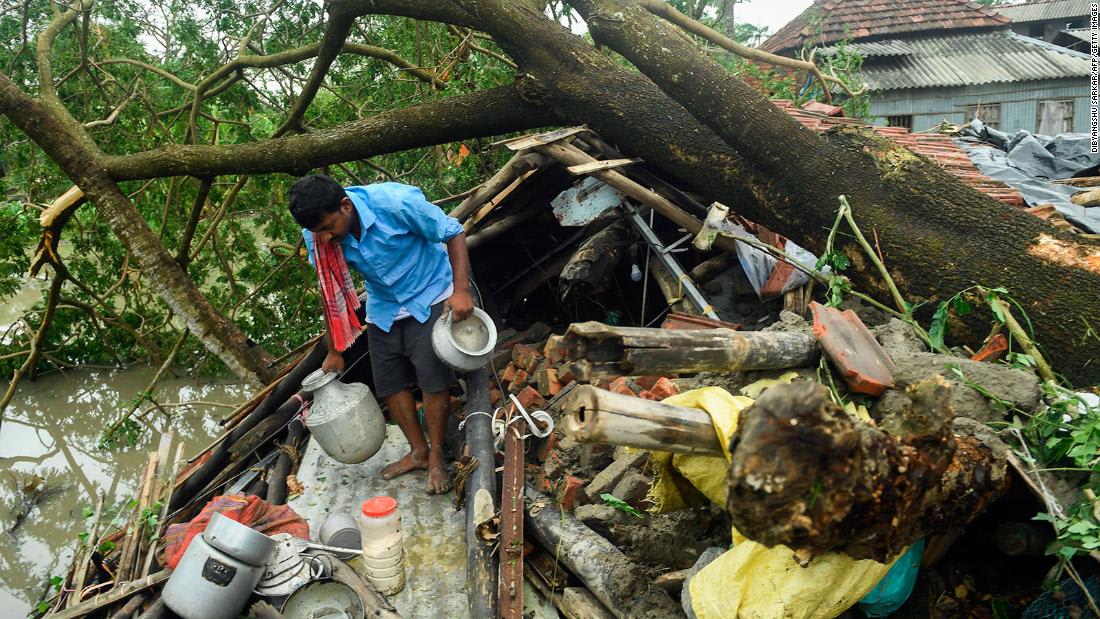 In an interview with BBC Sport, International Olympic Committee President Thomas Bach said he understands why the Tokyo Olympics would need to be canceled if the Games cannot be held in the summer of 2021.

Bach said Japan’s Prime Minister Shinzo Abe had made it clear to him that next summer was the “last option” for the Olympics in Japan.

In April, Abe said it would be "impossible" to hold the Olympics unless the coronavirus pandemic was contained.

"Quite frankly, I have some understanding for this, because you cannot forever employ 3,000, or 5,000, people in an organizing committee," Bach told BBC Sport.

Bach added, "You cannot every year change the entire sports schedule worldwide of all the major federations. You cannot have the athletes being in uncertainty."

In the interview, Bach also said reorganizing the Olympic games was a "mammoth task" and a scenario of holding the games behind closed doors remains as "speculation."

At least 5,000,038 cases of Covid-19 have now been recorded globally, according to data compiled by Johns Hopkins University.

These 5 countries are reporting the highest number of cases:

Editor's note: Michael Bociurkiw is a global affairs analyst, former spokesman for the Organization for Security and Cooperation in Europe and host of the podcast Global Impact. The opinions expressed here are his.

The World Health Assembly (WHA) -- the biggest event on the global health agenda -- held on Monday and Tuesday this week, can be easily summed up: The Trump administration threatened to take the UN agency off life support as it fights a global pandemic -- and Chinese President Xi Jinping threw it a new lifeline.

Xi -- widely criticized for his government's failure to sound the alarm over the situation in Wuhan, where the novel coronavirus outbreak began -- was able to manipulate the 73rd WHA into a much-needed PR makeover for China.

Meanwhile, the United States walked away, threatening to pull funding and membership from the World Health Organization (WHO) -- potentially hobbling its ability to deliver a robust response to the ongoing Covid-19 pandemic.

Trump has already withdrawn the US from other UN agencies -- such as the United Nations Educational, Scientific and Cultural Organization (UNESCO) and United Nations Human Rights Council (UNHCR) -- and from such landmark agreements as the Paris climate accord.

In a wider context, what we saw play out at the WHA was more proof of the Trump administration's abdication of America's traditional role as guarantor of globalization -- and the unwitting creation of a void for the Middle Kingdom to exploit. 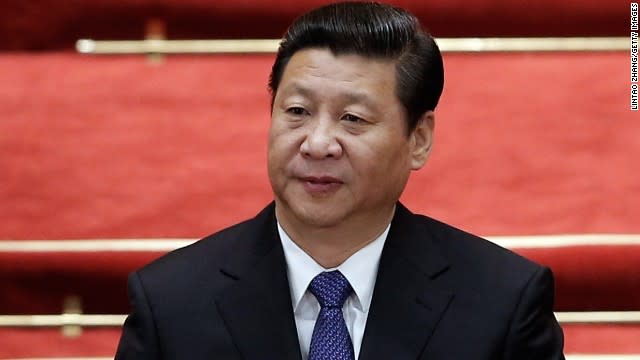 Is China the new leader on the world health stage?