The biotech company partnered with the National Institutes of Health to develop the vaccine, and reported this week that volunteers are showing positive results. If future studies go well, the vaccine could be available to the public as early as January, according to Moderna's chief medical officer.

Here's how it works: This vaccine produces neutralizing antibodies, which bind to the virus, thus disabling it from attacking human cells and preventing infection.

The human body actually produces antibodies against coronavirus quite readily, Fauci said -- that's why a large number of people spontaneously recover from the virus by themselves.

The trial results: The Moderna trial vaccinated dozens of participants and measured antibodies in eight of them. All eight developed neutralizing antibodies to the virus at levels reaching or exceeding the levels seen in people who've naturally recovered from Covid-19, according to the company.

"Although the numbers were limited, it was quite good news because it reached and went over an important hurdle in the development of vaccines. That's the reason why I'm cautiously optimistic about it," Fauci said.

Memorial Day is around the corner and each state has unique rules and regulations around how people can celebrate at places like beaches and state parks.

CNN has produced a resource here that shows where each state stands on reopening.

"Florida's beaches are technically open, but if you want to go to the 7 1/2 miles of beach in Miami beach, those remain closed. The mayor there says it has to do with exactly what you would think," CNN's Erica Hill said during the network's global coronavirus town hall. "There are concerns about controlling the numbers of people on the beach, concerns about social distancing on those public beaches." 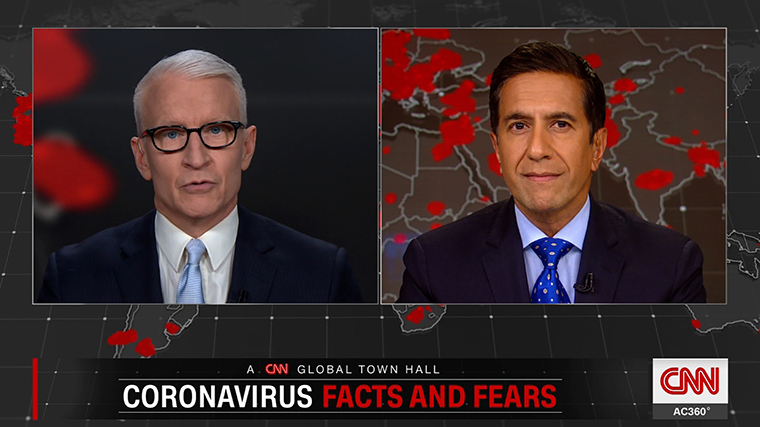 Her remarks, which will be pre-recorded, are the first solo broadcast message from Trump since the onset of the pandemic.

It is anticipated she will specifically address the nation's students, most of whom have had their academic lives altered by stay-at-home orders and other precautionary health measures.

This week's town hall, hosted by CNN's Anderson Cooper and Dr. Sanjay Gupta, is focused, in part, on education and the disruption to schools and colleges because of Covid-19. The town hall starts at 8 p.m. ET.

How to watch: The town hall will air on CNN, CNN International and CNN en Español. It will stream live on CNN.com's homepage and across mobile devices via CNN's apps, without requiring a cable log-in.

You can also watch on CNNgo, and subscribers to cable/satellite systems can watch it on-demand.

We'll also be covering it with live updates here.

Brazil set a record high for deaths from coronavirus within 24 hours and surpassed 300,000 total cases, the country's Health Ministry announced on Thursday.

Some context: Brazil’s President Jair Bolsonaro, who once compared the virus to “a little flu," sent a tweet on Wednesday about the new health ministry protocol regarding the use of chloroquine to treat mild and moderate cases of Covid-19.

He tweeted: “There is still no scientific proof, but it is being monitored and used in Brazil and around the world…we are at war ‘the shame of not fighting is worse than being defeated’ – God Bless our Brazil.”

Around 5% United Kingdom antibody tests are positive, UK Health Secretary Matt Hancock said during a daily briefing on Thursday, citing to a surveillance study conducted by the UK Government.

According to Hancock, the UK government’s antibody surveillance study has also shown that the percentage that tested positive for coronavirus antibodies in London is higher at 17%.

The study "has told us that around 17% of people in London and around 5% or higher in the rest of the country have tested positive for coronavirus antibodies,” Hancock said.

Latin America has reported more new coronavirus cases than either the United States or Europe for three days in a row, driven by high numbers in Brazil, Peru and Mexico, CNN analysis of Johns Hopkins University and World Health Organization data shows.

The numbers: The region reported at least 32,854 new cases on Wednesday, with more than half of them in Brazil.

The United States reported 22,534 new cases that day, according to Johns Hopkins University, while Europe – including Russia – reported about 17,900, according to the WHO. Both agencies rely on national governments for their data.

Latin America also reported more new cases than the Unites States or Europe on Tuesday, CNN calculations show: At least 29,240 in Latin America, compared to 22,391 in the United States and about 19,200 in Europe.

And on Monday, Latin America reported at least 23,388 new infections, while the United States reported 22,813 and Europe reported about 20,000.

Britain has begun trials of a new swab test for the novel coronavirus which provides results in 20 minutes, the UK Health Secretary Matt Hancock announced during a daily briefing on Thursday.

“It doesn’t need to be sent to a lab to be processed and so you get the result, on the spot, typically within around 20 minutes,” Hancock said, adding that it had proven effective in early trials. “We want to find out if it will be effective on a larger scale.”

“If it works, we will roll it out as soon as we can,” he also said.

The new test is developed by British company Optigene.

British health care workers will be the first to be tested for coronavirus antibodies after the government reached a deal with Roche to procure the test kits.

Prime Minister Boris Johnson’s spokesman said today that the UK and the giant pharmaceutical company had agreed on deal, a week after the national health agency approved the tests for use.

The tests will be free and more details will be released later during a daily government coronavirus briefing, he said.

The UK currently has the fourth most coronavirus cases, according to the John Hopkins University tally on the pandemic.

The World Health Organization has created a Covid-19 guide for children ages 8 to 17, WHO said in a statement.

The guide “aims to help young people understand the science and social science of COVID-19 as well as help them take actions to keep themselves, their families and communities safe,” the statement said.

Along with The Smithsonian Science Education Center, WHO created the free online guide with seven student-led activities for children and teenagers..

“With all the myths and misconceptions out there, it is important for children and youth to understand the nature of this pandemic and what can be done to prevent future pandemics from happening,” said Dr. Soumya Swaminathan, chief scientist at WHO.

Here are some highlights from the guide:

The guide is available in more than 15 languages and can be found here.