Boris Johnson is under pressure to sack his chief aide after it was reported he and his wife breached the UK’s lockdown by traveling across England to stay with his parents, while showing symptoms of coronavirus.

Dominic Cummings drove more than 260 miles (420 km) from London to Durham, where he stayed with family members just days after Johnson put the UK into lockdown and banned family visits, an investigation by The Guardian and Daily Mirror found.

Police confirmed they attended a property in the area and spoke to an individual about the UK’s lockdown rules on March 31, PA Media reported. Downing Street has declined to comment.

“If (the media reports are) accurate, the Prime Minister’s chief adviser appears to have breached the lockdown rules. The government’s guidance was very clear: stay at home and no non-essential travel,” a Labour party spokesperson said.

"The British people do not expect there to be one rule for them and another rule for Dominic Cummings. Number 10 needs to provide a very swift explanation for his actions.”

The leaders of the Scottish National Party and Liberal Democrats called on Cummings, who played a senior role in the pro-Brexit campaign in 2016 and joined Boris Johnson in Downing Street last year, to resign or be sacked.

And David Lidington, Theresa May’s deputy while she was prime minister told the BBC: “There's clearly serious questions that Number 10 are going to have to address, not least because the readiness of members of the public to follow government guidance more generally is going to be affected by this sort of story."

The UK’s coronavirus restrictions made clear that people must not visit any other household, including second residences or family homes, and must not carry out any non-essential travel.

“You should not be visiting family members who do not live in your home,” the rules stated. “You should keep in touch with them using phone or video calls.”

The country’s self-isolation guidance also states that if a person has symptoms of Covid-19, they must not leave their home for seven days.

On April 25, Cummings’ wife Mary Wakefield wrote a column in The Spectator magazine about the pair’s experience with Covid-19, but made no mention of traveling outside the capital.

“My husband did rush home to look after me,” she wrote in the piece. “After the uncertainty of the bug itself, we emerged from quarantine into the almost comical uncertainty of London lockdown,” she added.

Cummings showed symptoms shortly after Johnson revealed he had tested positive for the coronavirus. The PM later spent a brief period in intensive care with the virus. He has repeatedly urged people to stay at home.

Neil Ferguson, a leading epidemiologist who advised the UK government on its coronavirus response, was forced to resign earlier this month after it emerged he also broke the lockdown rules.

Scotland's chief medical officer, Catherine Calderwood, also left her position last month after she was photographed by a Scottish newspaper near her family's second home, in a different part of the country to her Edinburgh address.

As summer approaches, temperatures are starting to rise in Europe, and citizens are looking towards their next vacations after months stuck at home under lockdown restrictions.

Just last week, the European Union unveiled a plan to "offer people the chance to get some well-needed rest, relaxation and fresh air," which included recommendations to open internal borders, revive rail, road, air and sea connections and reinvigorate its hospitality sector to boost tourism.

But authorities are already struggling to deal with an influx of tourists and locals to one of summer's most coveted locations: The beach.

Meanwhile, authorities in the Dutch coastal province of Zeeland on Wednesday temporarily closed roads into the town for every weekend until June 1 because of predicted good weather and an expectation that emergency measures could be violated.

In Barcelona, Spain, officials have warned citizens to stick to timeslots when visiting the beach, and in the UK, ahead of a public holiday on Monday, councils for seaside towns and cities have issued pleas for crowds to stay away.

A hairstylist with coronavirus worked for eight days this month while symptomatic, exposing as many as 91 customers and coworkers in the US state of Missouri, health officials said.

The case highlights the threats of community spread in the US as businesses start to reopen after weeks of shutdown to combat the spread of coronavirus.

In this instance, 84 customers exposed got services from the hairstylist at Great Clips, said Clay Goddard, director of the Springfield-Greene County Health Department. In addition to the customers, seven colleagues were also notified of exposure.

"The individual and their clients were wearing face coverings. The 84 clients potentially directly exposed will be notified by the Health Department and be offered testing, as will seven coworkers," the Springfield-Greene County Health Department said in a statement. "It is the hope of the department that because face coverings were worn throughout this exposure timeline, no additional cases will result."

Goddard did not provide details on the identity or the condition of the stylist. He said health officials have reached out to the people who were exposed, adding that the hairstylist had kept impeccable records that made contact tracing possible.

After weeks spent holed up indoors to stop the spread of coronavirus, Americans will emerge from lockdowns to venture outdoors for Memorial Day this coming Monday.

There will be beach days, cookouts and park visits. And with the large gatherings, the risk for community spread outbreaks will be high, health officials warn.

"We'll be having people who want to get out there and get fresh air," Dr. Anthony Fauci said at a CNN coronavirus town hall. "You can do that."

But that does not mean let your guard down as coronavirus spreads.

"Go out, wear a mask, stay six feet away from anyone so you have the physical distancing," he said. "Go for a run. Go for a walk. Go fishing. As long as you're not in a crowd and you're not in a situation where you can physically transmit the virus."

Enforcing the rules: Paul Kanitra, the mayor of Point Pleasant Beach, New Jersey, said police will be on the beach this weekend to enforce social distancing by giving warnings or asking people to leave.

"Nobody wants to be the mayor from 'Jaws' who lets everyone back in the water a little too soon, right?" he said. 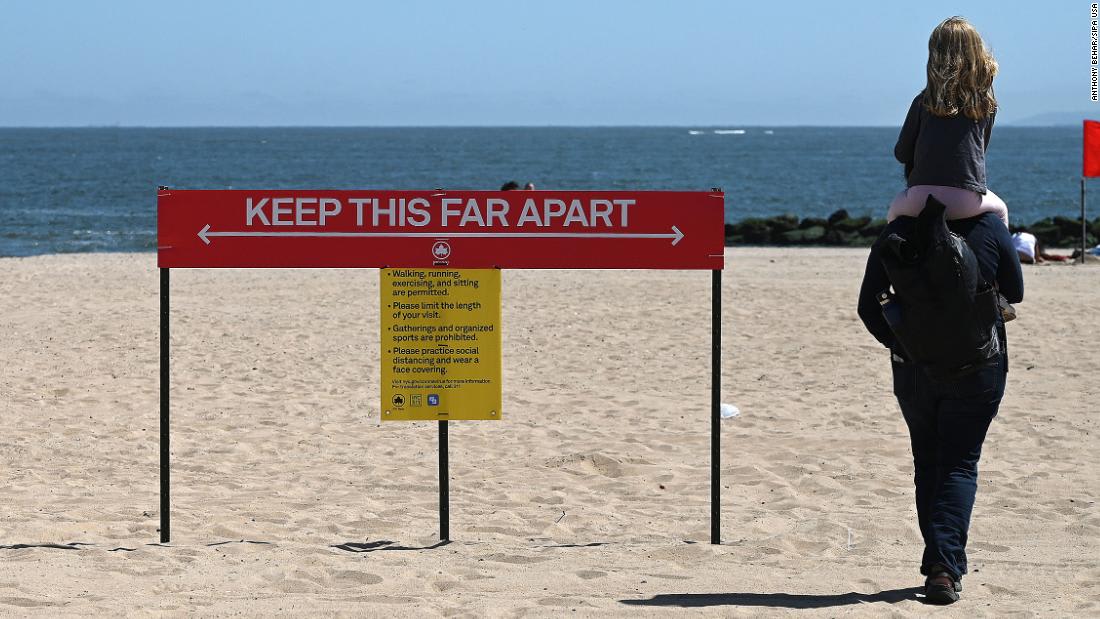 On May 9, reports started emerging of cases spiking in the South Korean capital of Seoul.

It immediately raised alarm; South Korea had just started loosening restrictions and opening up some businesses after largely regaining control of the outbreak that had peaked in February and March.

Authorities quickly identified the cases as concentrated in Itaewon, the entertainment district popular for bars and nightclubs. A 29-year-old man infected with Covid-19 had visited several clubs, where he transmitted the virus to dozens more people.

There have now been 219 cases linked to the nightclub cluster, Kwon Jun-wook, deputy director of Korea’s Centers for Disease Control and Prevention, said on Saturday.

The KCDC said yesterday that the man had infected 95 people in Itaewon, who then spread the virus further.

The numbers: South Korea now has 11,165 cases nationwide and 266 deaths, according to data from Johns Hopkins University.

The coronavirus pandemic is highlighting inequalities in wealth and health care access around the world -- and in Brazil, the crisis has reached the poverty-stricken and densely-populated favelas.

An estimated 13 million people nationwide live in these neighborhoods, where many residents subsist on minimum wage or less and depend on jobs that have been impacted by the pandemic.

"This is the place people don't want to live in, yet poverty means it's packed all the same," he said, walking through narrow streets. "It's in these densely-packed alleyways you can tell the real risk of a high infection rate."

One resident in the favela told CNN she had tested positive despite wearing masks whenever going outside to the market. Without much space to self-isolate, she resorted to sitting on her second-floor terrace.

Some context: On Saturday, Brazil surpassed Russia to become the country with the second-highest number of cases globally, after the United States.

The country has seen its numbers spike in recent weeks; on Friday authorities said they had recorded 20,803 new cases in the past 24 hours.

The nationwide total now stands at 330,890 cases and 21,048 deaths, according to data by Johns Hopkins University.

Take a look at the Sao Paulo favelas:

Europe outright rejected US President Donald Trump's vision of the world this week. Tensions between these historic democratic allies that have been simmering since Trump came to office three years ago have now come to a boil during the coronavirus pandemic.

Covid-19 has shocked the world by the speed of its spread, but it is also accelerating another global change in the balance of power -- and not in America's favor.

US and China: Despite Trump's early hailing of Xi Jinping's handling of the pandemic, he has since blamed the Chinese President for covering up the early stages of China's outbreak. Beijing has consistently denied such accusations, and criticized the US approach to the pandemic.

Trump has also sought to blame the WHO for siding with China, and cut almost $500 million in funding to the United Nations body.

Europe's role: Despite deep concerns about China's handling of the pandemic, European leaders backed the WHO resolution calling for "a stepwise process of impartial independent and comprehensive evaluation, including using existing mechanisms, as appropriate to review experience gained and lessons learned" from the global response to Covid-19.

What this means: The language is convoluted and hardly inspires confidence China will atone appropriately for its early failures, but it is a measure of the gulf opening up between Trump and his European allies that such a compromise could even be countenanced. 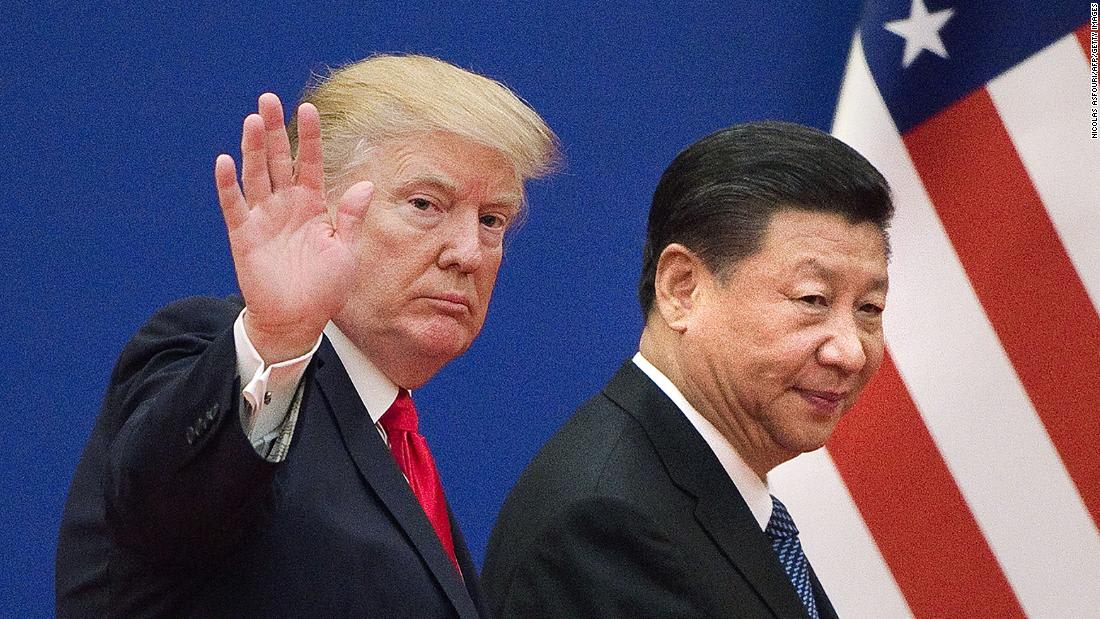 The pandemic could reshape the world order. Trump's chaotic strategy is accelerating US losses

India recorded 6,654 new cases in the past 24 hours -- the country's biggest one-day surge in cases so far, said the Ministry of Health and Family Welfare on Saturday.

The western state of Maharashtra is the hardest hit in the country, with 44,582 cases and 1,517 deaths.

This comes as domestic flights resume in India. The government announced that domestic airlines would be able to resume services starting next week, though some states have said incoming passengers would still be subject to a mandatory 14-day quarantine.

The US reported 24,104 new cases of Covid-19 and 1,299 related deaths on Friday, according to Johns Hopkins University.

New York is the worst-affected state, with at least 358,154 cases and 28,853 deaths. New Jersey, Illinois, and Massachusetts follow next.