Noting the continued decline in daily deaths in the state, Cuomo said, "that number is dramatically different than what we were looking at for many many weeks."

The coronavirus pandemic may be associated with a significant drop in cancer patients participating in clinical trials, especially in areas most affected by Covid-19, a new study suggests.

In an effort to reduce the risk of exposing patients and staff to the novel coronavirus and to preserve resources, some institutions in the United States have pulled back or altogether stopped enrollment in trials, according to the study published in the medical journal JAMA Network Open on Monday.

The study included data on initial enrollments in trials conducted through the SWOG Cancer Research Network between January and April 25.

The data showed that the number of cancer patients enrolling in trials declined from anywhere between 125 and 150 per week in January, February and early March to only 109 patients in the week of March 15.

After that, enrollment appeared to go back up just slightly, then down again.

As the pandemic continued, trials in areas with some of the nation's highest numbers of Covid-19 cases were "approximately half as likely" to continue enrolling patients, the researchers from various institutions across the United States wrote in the study.

Note on the study: The study had some limitations, including that it only involved data from the SWOG Cancer Research Network - which is 1 of 4 adult National Cancer Institute network groups.

More research is needed to determine whether similar findings would emerge among a larger sample of trials.

So far, "the National Cancer Institute and the US Food and Drug Administration have issued guidance to provide greater flexibility to ensure that patients enrolled in clinical trials are exposed to as little risk as possible during the Covid-19 pandemic," the researchers wrote in the new study.

Those steps include allowing for remote consent and establishing virtual telehealth visits, which are "approaches that may improve the experience of trial participation for patients in the long term," the researchers wrote.

Dr. Tom Frieden, former director of the US Centers for Disease Control and Prevention, told Axios Health he thinks another 20,000 people could die from Covid-19 within the next month.

The stark estimate is based on the current number of cases in the US, he told the website.

Frieden said the CDC has been regulated to the backseat during this pandemic.

"The whole US response has not been informed by public health since February," he said. "It's been very hard to know how decisions are made."

Jennifer Nuzzo, an epidemiologist at Johns Hopkins University told Axios, "I think people think we've come out of something," but in reality, she said, "we hit pause, and now we're hitting play, and we don't know what the next song's going to be.”

The economic reopening of São Paulo state, the most populous in Brazil, starts today for sectors such as shopping malls, commerce, offices, real estate and car shops.

There are five phases for reopening, which will be adopted by the mayor of each city as they see fit based on the coronavirus situation in their jurisdictions.

However, the mayor for the capital city of São Paulo, Bruno Covas, extended the ban on nonessential activities there until June 15, contrary to the expectations of representatives of industry and commerce.

Some background: The state of São Paulo has been under quarantine since March 24. The state is the epicenter of Brazil’s coronavirus outbreak, with more than 100,000 confirmed virus cases and 7,615 deaths.

Brazil is second only to the United States in its number of coronavirus cases.

Dr. Carissa Etienne, the director of the Pan American Health Organization, said earlier this week that the Americas have “become the epicenter of the Covid pandemic.”

Fauci said when the White House Task Force was meeting every day, he’d also have meetings with Trump about four times a week.

“But as you probably noticed, that the task force meetings have not occurred as often lately. And certainly my meetings with the president have been dramatically decreased,” Fauci told the medical news website.

Fauci wasn’t impressed with how Moderna put out a press release on their vaccine data. “I didn’t like that,” he said.

“What we would have preferred to do, quite frankly, is to wait until we had the data from the entire Phase 1 — which I hear is quite similar to the data that they showed — and publish it in a reputable journal and show all the data.”

Nevertheless, the Moderna release did make him “cautiously optimistic.”

He’s also happy to see several other vaccines in development, including the Oxford University/AstraZeneca vaccine and the Pfizer vaccine, as well.

“What I like about the whole thing is that there are multiple candidates that we’re involved with. It just feels good to be directly or indirectly involved in four or five candidates,” he said.

As Fauci has said before, the timetable for having a vaccine by the end of the year is “aspirational” but “doable.”

“Whether we do the trial over 10 years, or we do it over four months, the endpoint is still the same.”

But that doesn’t mean he’s worry-free. When asked if the prospect of an adverse reaction to the vaccine worries him, Fauci simply said, “Yes, I am.” 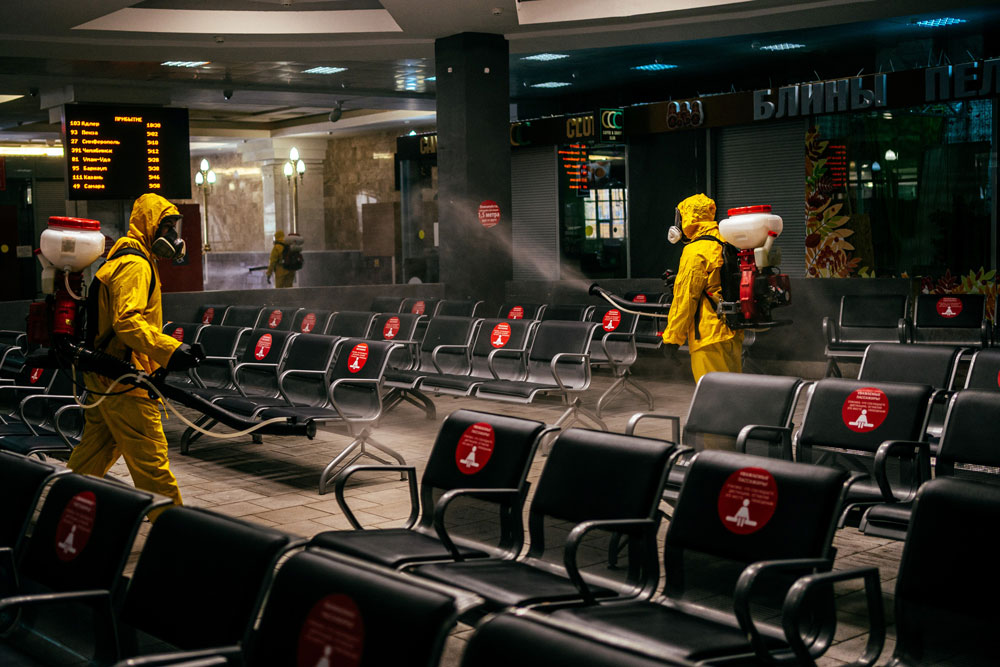 Russia on Monday reported at least 9,035 new cases of coronavirus over the past 24-hour period, with the official national total of confirmed cases reaching 414,878.

Russia has reported 4,855 total deaths attributed to Covid-19, but observers have questioned the government’s mortality calculations.

Moscow began to ease lockdown on Monday, allowing the reopening of stores selling non-food items and permitting Muscovites to venture out for walks on a schedule.

Eli Lilly and Company said it has started the first human trial of an antibody therapy to treat the novel coronavirus. If the trial is successful, the therapy could be available by the fall, the company said.

The first patients to receive the therapy are in hospitals at Cedars-Sinai in Los Angeles, New York University’s Grossman School of Medicine and Emory University in Atlanta, the company told CNN, and results are expected to be available by the end of June.

The antibody therapy was created through a partnership with AbCellera, a Canada-based biotech company and the Vaccine Research Center at the National Institute of Allergy and Infectious Diseases.

Scientists at AbCellera and NIAID used a blood sample from one of the first US patients to recover from Covid-19 and sorted through millions of cells to find hundreds of antibodies. Antibodies are proteins your body makes to fight an infection or toxin. The scientists picked the antibodies they thought would best neutralize the novel coronavirus. In the lab, the antibody appeared to neutralize the virus, Lilly said. Those results have not yet been published.

"We've already started the manufacturing process to really scale this up without even knowing yet if it works for patients, because if it does work, we don't want to waste a single day, we want to have as much medicine as possible available to help as many people quickly," Dr. Dan Skovronsky, Eli Lilly’s senior vice president and chief scientific officer, told CNN.

About the trial: Phase I of the trial in hospitalized patients will test to see if the therapy is safe and well-tolerateed. If so, the next trials would be expanded to Covid-19 patients that aren’t hospitalized and another study would test the therapy as prevention. The antibody therapy could potentially be used in vulnerable populations that may not respond as well to a vaccine, such as the elderly, people with underlying chronic conditions and people who are immunosuppressed who don’t always generate enough antibodies to be protected by a vaccine.

In trials over the next few months, Lilly says it will also test different mixtures of a few other antibodies that may provide protection.

Belgium’s Prince Joachim has publicly apologized after testing positive for the coronavirus in southern Spain. The 28-year-old royal had attended a social event with the family of a Spanish female friend there, his lawyer’s office confirmed to CNN on Monday.

Joachim, a nephew of Belgium's King Philippe, traveled from Belgium to Spain on May 24. On May 26, he attended a social gathering in Cordoba with "12 or 27 guests," the Belgian Palace's press office said. Joachim tested positive for Covid-19 on May 28.

In a statement released by the Cordoba law office of Mariano Aguayo, the prince said:

“I would like to apologize for travelling and not having respected the quarantine measures. I did not intend to offend or disrespect anyone in these very difficult times and deeply regret my actions and accept the consequences.”

Under Spain’s state of emergency, all travelers arriving in Spain from May 15, with few exceptions, are required to go into quarantine for two weeks. Under the confinement rules in place in Cordoba, gatherings of more than 15 people who don’t live together are not permitted.

Authorities are now investigating if the event had more than 15 people in attendance, the spokeswoman for Rafaela Valenzuela, the Spanish government’s chief representative in Cordoba, told CNN Monday.

The spokeswoman added that regional health authorities had informed the Spanish government that there may have been up to 27 people at the event.

A spokeswoman for the prince’s law office told CNN there were two social events on consecutive days last week at which the prince was meeting with the family of a female friend, but neither event was attended by more than 15 people.

The prince is in isolation now, with mild symptoms from the coronavirus, said the law office spokeswoman.

Prince Joachim is the third child of Princess Astrid, the younger sister of Belgium's serving King, according to the palace website.

The numbers: Spain has been one of the hardest-hit countries in Europe by Covid-19, with more than 239,000 confirmed cases and more than 27,000 deaths. As the infection rate has declined, the government has slowly eased confinement restrictions, while focusing on early detection through increased testing and contract tracing, to quickly tamp down on any new outbreaks.

The Armenian Prime Minister has contracted the coronavirus, his press officer told CNN.

Nikol Pashinyan is able to work from a distance and is isolating with his family members who have also contracted the virus, said his press officer Mané Gevorgyan.

He is doing fine, he has no symptoms,” said Gevorgyan.

There are 9,492 confirmed cases and 139 coronavirus-related deaths in Armenia as of Monday, according to data from Johns Hopkins University.