The World Health Organization says 133 potential Covid-19 vaccines are in development around the world, according to documents posted on the organization’s website.

Ten of the potential vaccines are in clinical trials in the United States, the UK and China.

Belgium: Preschool classes will resume from Tuesday. Lessons in primary schools will be able to resume from June 8 (possibly with a "trial" day on June 5).

Netherlands: Restaurants, cafés and bars, cinemas, theatres and concert halls reopened Monday. Secondary schools are reopening Tuesday. Students and teachers must stay 1.5 metres apart. Primary schools will reopen from June 8. Face masks must be worn by people aged 13 and above on public transport.

Switzerland: From June 6, private and public events with up to 300 people will be allowed, including family events, fairs, concerts, plays and film screenings, as well as political and civil society demonstrations. Sports training resumes without any restrictions on group sizes from June 6. Larger groups will be allowed in restaurants from June 6 and activities such as playing pool or live music shows will also be allowed. Classroom teaching at upper secondary and vocational schools and at higher education institutions will resume from 8 June.

Italy: Fifty museums and archeological parks will reopen Tuesday (a national holiday). More than 180 cultural institutes have reopened so far. Museums have to follow government guidelines. Games in Italy's Serie A football championship will restart on June 20.

Portugal: Most of the country entered the third phase of de-escalation on June 1. People can gather in crowds no larger than 20 people, work in offices is gradually resuming. Larger stores and restaurants in shopping malls can re-open and the 50% maximum capacity for restaurants has ended as long as a distance of 1.5 meters is maintained. Pre-schools are reopening, along with cinema, theaters and bars and clubs on the island of Madeira until 2 a.m. Tourists do not need to quarantine when entering Portugal. Beaches will reopen June 6.

Ireland: "Phase 2" starts on June 8. People will be able to travel up to 20km away from home as opposed to the 5km limit which has been in place since May 5. Small retail outlets can reopen with a small number of staff. Public libraries may open so long as the numbers allowed in are limited, social distancing is observed and there is strict hand-sanitizing. On June 29, crèches, childminders and pre-schools for children of essential workers will open in a phased manner; the opening of all other non-essential retail outlets will be phased in; cafés and restaurants providing on-premises food and beverages can reopen. They must comply with social distancing and strict cleaning protocols.

Wuhan’s Health Commission announced Tuesday that it had completed coronavirus tests on 9.9 million of its residents with no new confirmed cases found.

"From May 14 to the end of June 1, 9,899,828 people in Wuhan have received nucleic acid tests," Lu Zuxun, of the Chinese Preventive Medicine Association, said at a news conference.

Lu said no new cases had been found as a result of the city-wide testing, but 300 asymptomatic infections were discovered. China does not count asymptomatic cases as confirmed cases.

According to Hu Yabo, the deputy mayor of Wuhan, the city spent around $126 million on the testing campaign.

The UK government has denied British media reports that the publication of its review into how the coronavirus pandemic has affected BAME (Black and Minority Ethnic) communities has been delayed because of protests in the United States over the death of George Floyd.

The report, analyzing how different factors -- including ethnicity, gender and obesity -- can impact on people’s health outcomes from Covid-19, had been due for publication by the end of May, according to Public Health England.

It was commissioned by England’s Chief Medical Officer Chris Whitty in April, amid fears that the coronavirus pandemic is "disproportionately" affecting black and ethnic minority communities.

"There are a number of reasons for this that have been posited, and it is right that we do thorough research swiftly so that we can better understand it and take action as required," Communities Secretary Robert Jenrick said on April 18.

In response to CNN questions about why the report has been delayed, a Department of Health and Social Care spokesperson said in a statement:

Ministers received initial findings yesterday [Monday]. They are being rapidly considered and a report will be published this week."

"It is not true to say this has been delayed due to global events," the spokesperson added.

UK opposition leader, Labour's Keir Starmer, on Tuesday called on the government to "stop the excuses" and "publish the review," in a post on Twitter.

“BAME communities have been disproportionately affected by Covid-19. We need the findings of this review published and action taken now,” he said.

Labour's Shadow Secretary for Women and Equalities, Marsha De Cordova, urged the government to name a date for publication, saying "its findings could save lives."

"The government has already delayed the report's release from the end of May. BAME communities across the country need reassurance that this issue is being taken seriously, and not being kicked into the long grass," she said.

"It is unacceptable to delay the release of a report into the unequal suffering of the BAME community on the basis of global events that relate to the suffering of black communities around the world."

At the beginning of May, analysis by the London-based Institute of Fiscal Studies (IFS) found ethnic minorities in England and Wales were dying from coronavirus at far higher rates than their white peers.

The think tank found that after eliminating age and geography, people from black African backgrounds were 3.7 times as likely to die in hospital from the disease than their white British counterparts. Death rates for those from Pakistani backgrounds were 2.9 times higher than the white British group, while Bangladeshi fatalities were twice as high.

A University College London analysis of National Health Service data about patients with a positive Covid-19 test who died in hospitals in England from March 1 to April 21 found that the average risk of dying in hospital from the virus was around two to three times higher for BAME groups in England, when compared to the general population.

P&O Cruises is extending the pause in its operations until October 15, amid the ongoing coronavirus pandemic.

"As a business, our operational focus is not: 'When can we resume sailing?' but instead: 'How can we develop a comprehensive restart protocol that will keep everyone on board -- crew and guests -- safe and well, and still give our guests an amazing holiday?'" P&O Cruises President Paul Ludlow said.

The cruise line, which is owned by US firm Carnival, said it is in close coordination with all relevant public health bodies.

The number of deaths in the UK directly attributed to Covid-19 is approaching 50,000, according to official statistics released Tuesday.

There have been 48,321 deaths in the UK, registered between January 1 and May 22, in which Covid-19 was mentioned on the death certificate. That’s according to numbers from England and Wales’ Office for National Statistics, National Records of Scotland, and the Northern Ireland Statistics and Research Agency.

Austria will open the 2020 Formula One season with back-to-back races on Sunday 5 and Sunday 12 July after it was delayed because of the coronavirus, Formula One announced on Tuesday.

The first eight races of the revamped calendar will take place in Europe over a 10-week period at six track locations.

After the two Austrian events, a third race will follow in Hungary on Sunday 19 July before two back-to-back races in Britain in early August, and others in Spain, Belgium and Italy.

All eight races will take place without spectators in attendance. Organizers say they will operate under the strongest safety procedures.

In a statement, Formula One said it expected to finalize the details of the wider calendar in the coming weeks; the plan is to run a total of 15-18 races before the season ends in December.

Delayed start: The 2020 season had been due to begin in Australia on Sunday 15 March, but the race was called off hours before the first practice session amid Covid-19 fears.

Motorsport’s governing body, the International Automobile Federation (FIA), announced last Thursday that Formula One's 10 teams would be limited to a maximum of 80 people each at the races.

What to do when you're stranded in Alaska by a global pandemic and are trying to get back home to Norway -- with 24 dogs in tow.

It's been quite a three months for dog musher Thomas Waerner, who tells CNN Sport it's an experience he'll remember until the day he dies.

The 47-year-old won the Iditarod Trail Sled Dog Race in March, but canceled flights and travel restrictions have prevented him from returning home to his family.

But the intrepid adventurer has come up with an innovative escape plan.

He's booked his passage on a historic aircraft destined for a Norwegian museum, with his team of dogs for company.

"Winning the race and then going back on the plane ... I think this was one of the cool things that happen in life," Waerner told CNN Sport in a phone interview. 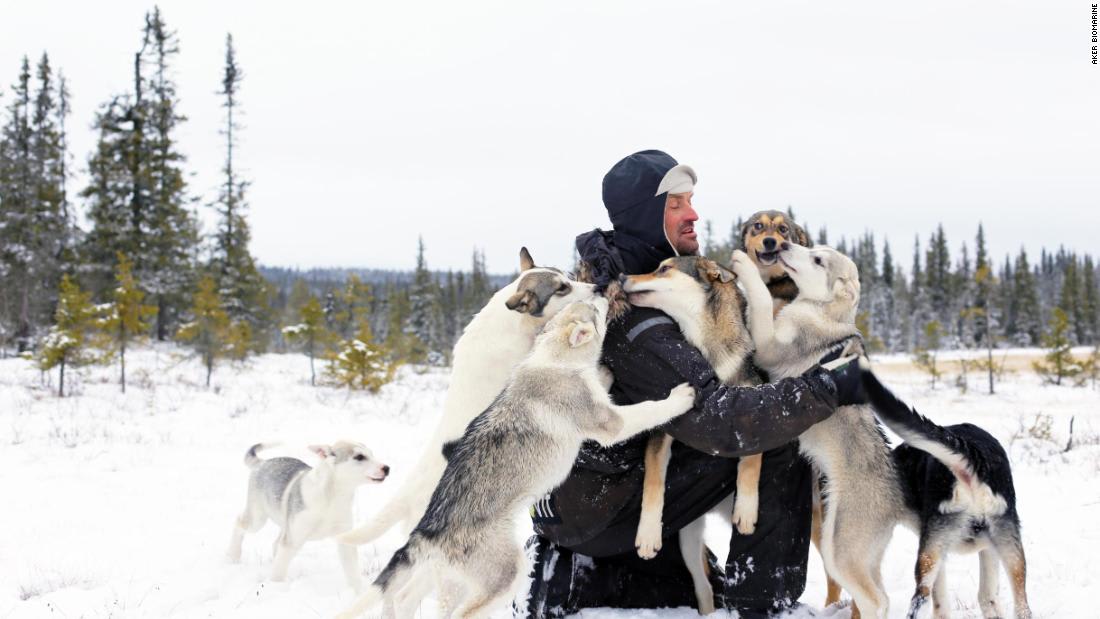 Indonesia's Religious Affairs Minister Fachrul Razi announced the government's decision not to send pilgrims to Mecca in 2020 due to virus concerns.

"The government has decided to not send Hajj pilgrims in 2020/1441 Hijriah," Razi said, during a virtual news conference on the annual Islamic pilgrimage reported by state-run Antara News Agency.

"This is a bitter and tough decision to take. We have made all-out efforts, but on the other hand, we are accountable for the protection of Hajj pilgrims," he stated.

"Saudi Arabia is yet to give Hajj access to any country in the world. Hence, the government is left with little time to prepare the services and protection for Hajj pilgrims," Razi added.

Indonesia's Antara News reported that Indonesia was offered the highest quota for this year’s Hajj and planned to send 221,000 pilgrims to Mecca.

The decision was taken on the basis of a comprehensive study conducted by a team of the ministry and after consultation with the Indonesian Ulema Council (MUI).