New York City will perform 35,000 tests a day and monitor the data for any signs of a spike, Gov. Andrew Cuomo said Monday.

Cuomo asked all protesters to get a Covid-19 test, highlighting 15 testing sites around NYC that are prioritized just for protesters.

The Governor said there are more than 240 testing sites in New York City. The city entered phase one of reopening today.

Sunday marked the most Covid-19 cases reported to the World Health Organization in a single day so far during the coronavirus pandemic, WHO Director-General Tedros Adhanom Ghebreyesus said during a media briefing in Geneva on Monday.

"Yesterday, more than 136,000 cases were reported — the most in a single day so far," Tedros said. "Almost 75% of yesterday’s cases come from 10 countries, mostly in the Americas and South Asia."

"We also see increasing numbers of Covid-19 cases in parts of Eastern Europe and central Asia," Tedros said, although the situation in Europe overall has been improving.

Tedros added, "At the same time, we’re encouraged that several countries around the world are seeing very positive signs."

New York Gov. Andrew Cuomo said that the number of people testing positive for coronavirus in the state is down to its lowest number since March.

This low percentage has followed a trend over the past few days, the governor said.

The governor added that these numbers indicate that the state can continue to move forward with reopening.

"Why are we reopening? Because these numbers say that we can."

The World Health Organization supports the current movement against racial injustice and encourages all protesters to wear masks during demonstrations, Director-General Tedros Adhanom Ghebreyesus said during a media briefing in Geneva on Monday.

"WHO fully supports equality and the global movement against racism. We reject discrimination of all kinds," Tedros said on Monday.

"We encourage all those protesting around the world to do so safely," Tedros said.

Tedros added that countries where protests have been held should strengthen testing efforts and the tracking of potential Covid-19 cases.

"We also encourage countries to strengthen the fundamental public health measures that remain the basis of the response: Find, isolate, test and care for every case, and trace and quarantine every contact," Tedros said. "Contact tracing remains an essential element of the response."

Dani Lever, the governor’s communications director, tweeted a photo of the governor riding the city's subway.

Once the epicenter of the pandemic as the largest and densest city in the US, New York City is now allowing nonessential workers in construction and manufacturing to go back to work and retail stores to set up curbside or in-store pickup.

"I am just so proud with how New Yorkers have responded," he said today at a news conference. "New Yorkers heard the messages, New Yorkers did what they had to do"

Cuomo said that at the start of the pandemic in the state, experts said how the virus progressed would largely depend on what residents did to stop the spread. He applauded New Yorkers' efforts to flatten the curve.

"When things are tough, New Yorkers are tougher," Cuomo said.

In the past week, the number of daily Covid-19 cases in Florida has been greater than 1,200 for 5 of the past 6 days, according to the latest data from the Florida Department of Health (FLDOH).

An analysis of the data shows, however, that the percentage of positive cases has been dropping in the last week and an increasing number of test results have been posted.

Here's what the data showed:

For further context, from Thursday to Saturday, the latest three days of data available, more than 130,000 test results were posted by the FLDOH and 3,755 returned positive.

In a new op-ed published in The New York Times on Monday, University of Pennsylvania professors Dr. Ezekiel Emanuel and Dr. Paul Offit pose the concern that President Trump could push for the release of a Covid-19 vaccine prematurely in order to boost his campaign for the upcoming presidential election in November.

"Given how this president has behaved, this incredibly dangerous scenario is not far-fetched. In a desperate search for a political boost, he could release a coronavirus vaccine before it had been thoroughly tested and shown to be safe and effective," Emanuel and Offit wrote.

They went on to describe how there are 123 candidate Covid-19 vaccines in development around the world and 10 are currently in human trials.

In the United States, the federal government's "Operation Warp Speed" vaccine program aims to have a vaccine ready by the end of the year.

As the race for a vaccine continues, "the F.D.A. must require more than the production of antibodies to approve a vaccine, even for an emergency authorization, much less licensing. Only when the independent data safety and monitoring board composed of physicians, researchers and biostatisticians reviews the accumulated trial data to assess the safety and effectiveness of the vaccines, should the F.D.A. be allowed to decide on approval," Emanuel and Offit wrote.

"Thousands of Americans have already died as Donald Trump has perpetually postponed effective public health interventions and made poor therapeutic recommendations," Emanuel and Offit wrote. "We must be on alert to prevent him from corrupting the rigorous assessment of safety and effectiveness of Covid-19 vaccines in order to pull an October vaccine surprise to try to win re-election," they continued.

The Pentagon announced Monday that it had lifted travel restrictions on 44 destinations which had been placed to limit the spread of the coronavirus pandemic.

The 44 locations include 39 US states and five countries: Bahrain, Belgium, Germany, Japan and the United Kingdom.

The Pentagon said in a statement that these locations “meet the conditions to lift travel restrictions, subject to the assessment of conditions at individual military installations within these areas.

Some states that have not yet met the criteria for the lifting of travel restrictions include California, Florida and North Carolina.

Here is the full list of destinations where travel restrictions will be lifted, according to the Pentagon: 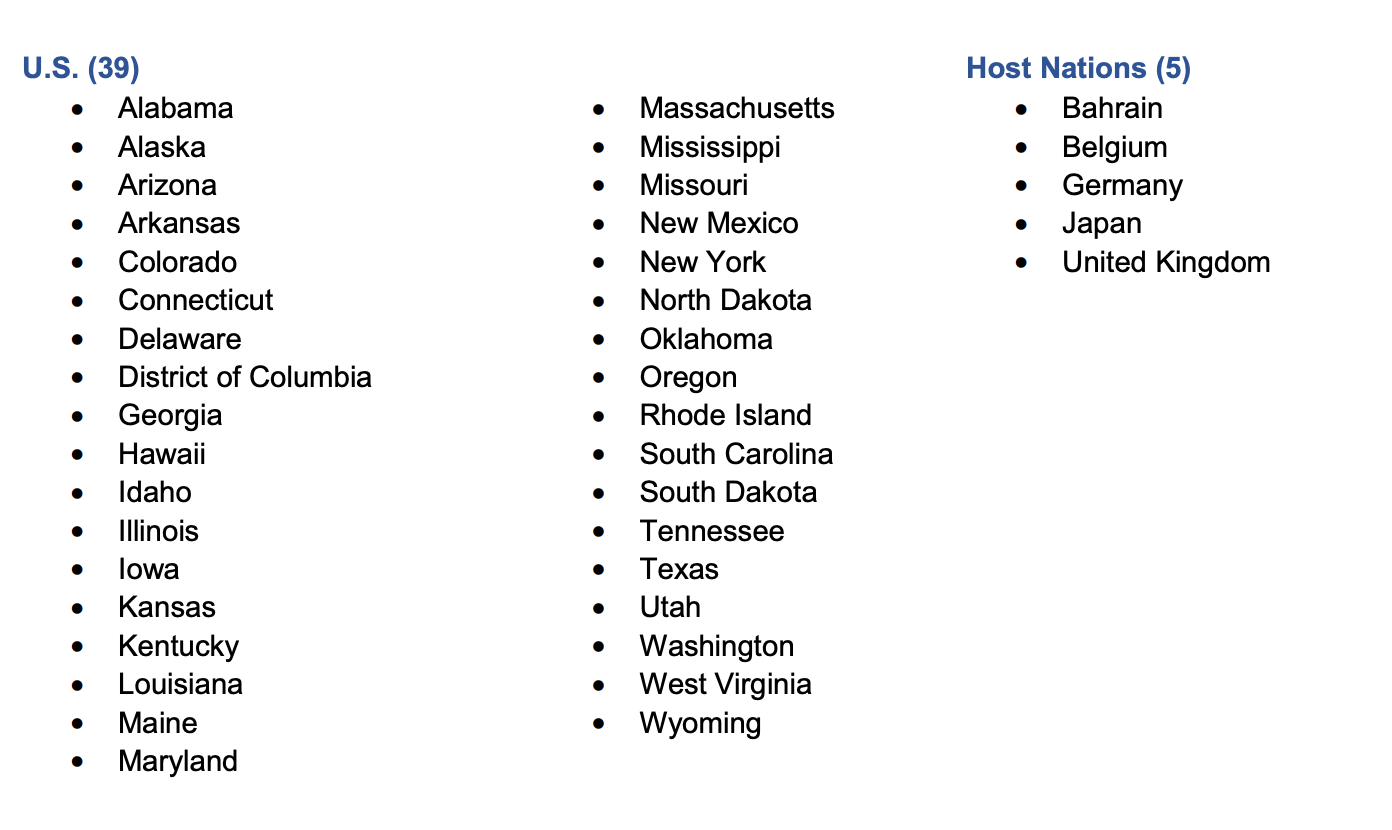